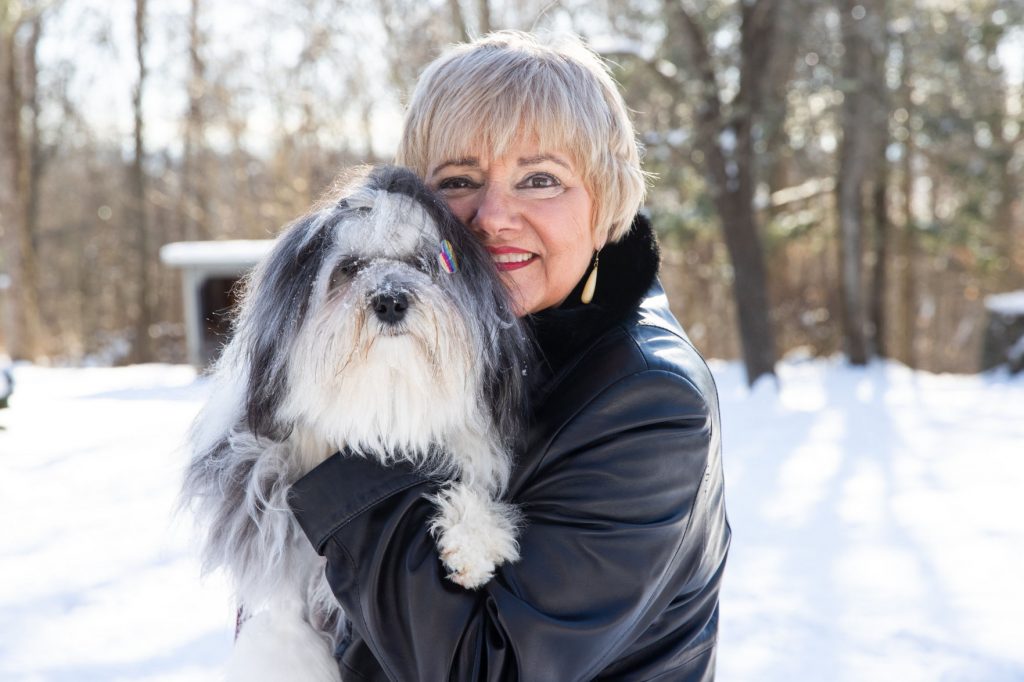 Helene Tinsley embarked on a new chapter inspired by two of the most important men in her life.

Her husband, Robert, died in August 2019, and 10 days later, the couple’s beloved dog, Rudy, followed. Heartbroken, Tinsley went through a dark period, but after processing her grief, she decided to focus her energy on a new adventure.

“I needed to do something that would challenge me, and while nothing takes your mind off of (the grief), I needed something to do that was worthwhile,” the Union Dale resident said. “My life wasn’t over. It’s not the way I thought my life was going to be, but you have to go where life takes you.”

Retired from her career in human resources and as executive director of local performing group Mostly Opera, she always dreamed of writing a children’s book about Rudy. A Lowchen, which means “little lion” in German and references the breed’s signature mane, Rudy possessed a silly, sweet and mischievous personality that Tinsely thought would make for the perfect protagonist. After years of hard work, “Rudy the Lowchen and the Last Slice” officially went on sale on Amazon last October.

Throughout her life, Tinsley’s husband loved adventure and always persuaded her to try something new. Writing the book was a long process, but she could feel his love every step of the way.

“Bobby was a beautiful person and very spiritual,” she said. “He said, ‘I’ll be watching over you.’ It felt like he was encouraging me to do it.”

Her husband also had convinced her that they needed a dog, back around 2005. Tinsley had felt apprehensive, though. Her husband owned and operated Tinsley Design and Fabricating Inc. in Moscow since 1982, and he worked long hours, so caring for a dog would fall to her most of the time. When he asked what kind of dog she would like, she told him about the Lowchens.

A fan of the television series “Hart to Hart” starring Robert Wagner and Stefanie Powers, Tinsley remembered the show featuring an adorable little Lowchen named Freeway. Plus, Lowchens have a storied history. The breed traces back to the cq1400s and mostly was the dogs of royalty and nobility, notably found in old paintings, tapestries and literature, according to the Lowchen Club of America. Lowchen also are on their way to becoming extinct, with only 80 dogs registered in the United States.

“They’re beautiful, special little dogs,” Tinsley said. “There’s something about those little balls of fluff that just drew me in.”

The couple connected with one of the only Lowchen breeders in the state and fell in love with the dogs. When a set of puppies was old enough for adoption, a little Lowchen with big, beautiful eyes climbed up on her husband’s lap. They named him His Grace Rodolfo de la Boheme but called him “Rudy” for short.

Rudy brought so much joy to his parents. He listened to Tinsley practice for opera performances and even accompanied the couple on trips to their second home in Costa Rica. He also kept them on their toes, Tinsely said. One time, the couple went golfing and left a full box of pizza on the counter. When they came home, most of the pizza slices were missing. They were afraid Rudy had eaten them until he started to follow them around the house, staring at couch pillows, under the covers of the bed and even at the sock drawer. They soon realized this was a game, and the spots were where he hid the pizza.

“He’d look so amused,” Tinsley said. “How could you be mad at him? … His vet loved him, our friends loved him, the opera company. … Everyone knew Rudy.”

When Tinsley’s husband learned he had cancer in 2017, Rudy remained a faithful companion during his fight. The couple lived their days to the fullest with Rudy by their side.

“He wanted to be with his daddy,” Tinsley said of Rudy’s death days after her husband’s. “Rudy just loved Bobby so much. It’s like he knew he needed to hang on for him.”

After she lost her husband and Rudy, Tinsley thought back on the children’s book idea. She enrolled in a continuing education writing class at Marywood University and ended up finishing her entire book over one weekend. For the next year and a half, she searched for an illustrator and graphic designer and taught herself the basics of self-publishing.

In December 2019, she noticed a Facebook friend she knew through the breed community had Lowchen puppies. While she didn’t think she had the heart to get another dog, she missed having the presence in the house. Tinsley and this woman found common ground, as she also lost her husband to cancer five years earlier. The woman noted she couldn’t have survived without her dog, and she convinced Tinsley to take one of her new puppies on Valentine’s Day 2020. Tinsley named him Valentino, aka Tino. Through Tino’s breeder, Tinsley also connected with an illustrator who loved and bred Lowchens, which felt like fate to her.

When Tinsley finally finished her book, the coronavirus pandemic halted many of her marketing plans, including reading the book to elementary school classes and setting up a table at the Kennel Club of Philadelphia National Dog Show. She still plans to take the book on the road when restrictions are lifted and even has some sequels in the works.

More importantly, Tinsley hopes her book can spread the word on the lovable yet endangered Lowchen breed. She donates proceeds from every book to the Lowchen Club of America, which helps fund research for the breed. However, any research on any breed benefits all dogs, she said.

In the meantime, Tino keeps her busy. A year old and currently in obedience lessons with Tinsley, he gets better every day. His personality is different than Rudy’s, and he’s definitely bolder, Tinsley said with a laugh. While no dog could replace Rudy, Tino certainly has helped repair her heart.

“Dogs are just the most incredible companions and provide so much unconditional love,” Tinsley said. “I was devastated after (I lost my husband and dog), but they helped me move into this new adventure in my life. They’re always with me and Tino.”

‘Rudy the Lowchen and the Last Slice’