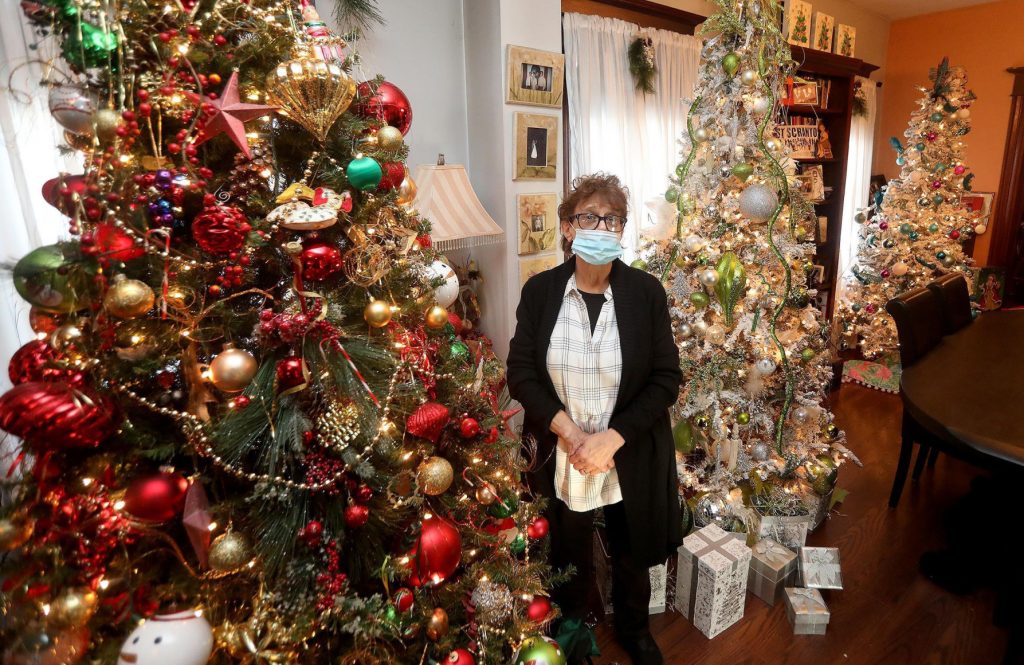 The West Scranton resident loves the holiday season, and her home – decorated from floor to ceiling with decorations – reflects that. She’s covered almost every inch of her home’s downstairs, including setting up 42 Christmas trees indoors and another 16 on her front porch.

“I’m nuts,” Egan said with a laugh on a recent afternoon at home. “This is just what I do, and everyone knows I’m nuts. … There’s just something I love about Christmas.” 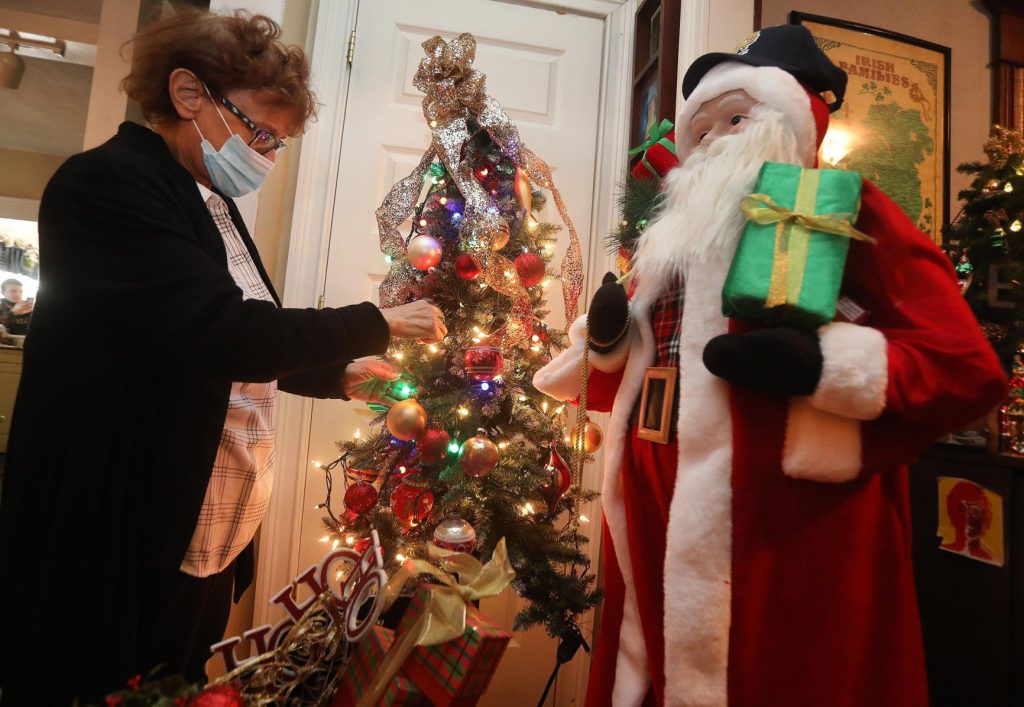 The trees range from 2 to 9 feet tall and come in various forms, from ceramic to sequin-covered to those with traditional, realistic-looking branches. Some trees have a deep green hue, some are white, and some are fashioned to look like they’re covered in snow.

They’re all decorated differently, too. 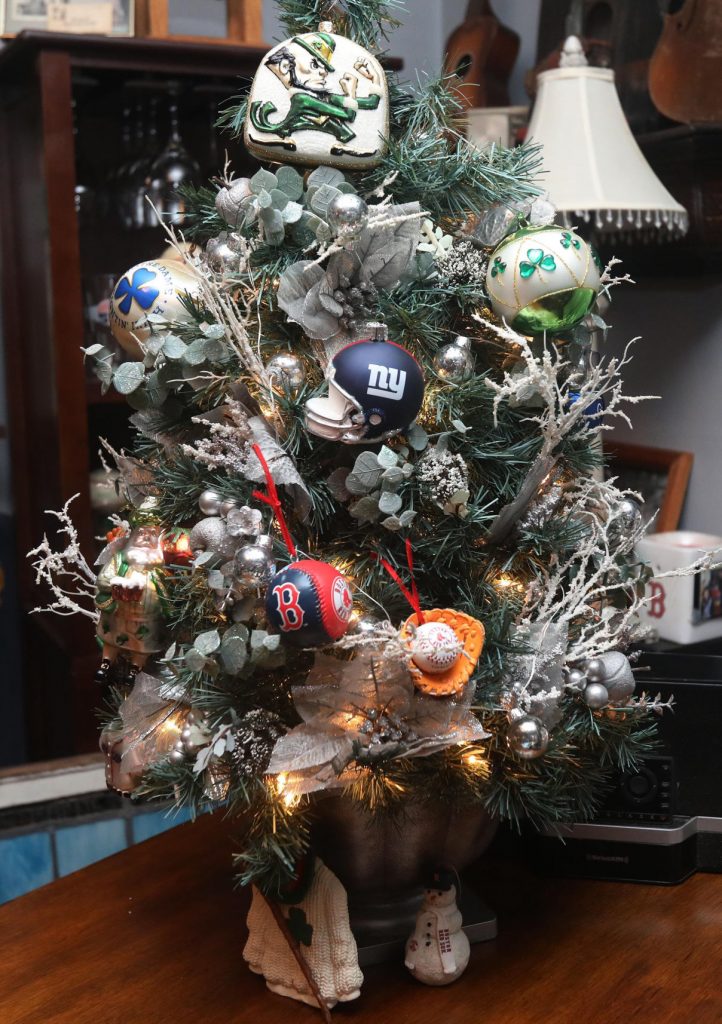 A few trees and decorations carry sentimental meaning. One ceramic tree belonged to Egan’s late friend, Fran Drake, whose family gave the decoration to Egan. Decades-old ornaments were passed down from Egan’s mother. A small tree is decked out in blue, white and Penn State ornaments and other Nittany Lion memorabilia. Though the Egans are proud Notre Dame fans, friend Cathy Coyne gifted the tree to Egan after Coyne’s husband, Mike, died. He was a huge Penn State fan, and Egan sets it up each year to honor him.

“I like bringing them out and seeing them and thinking, ‘This is Fran’s tree,’ or ‘This is Mike’s tree,'” she said. “It reminds me of all the memories (I have) of them, and it’s nice, especially during this time of the year.”

“He gets those little trees all around his bar,” she said. “That’s their spot.” 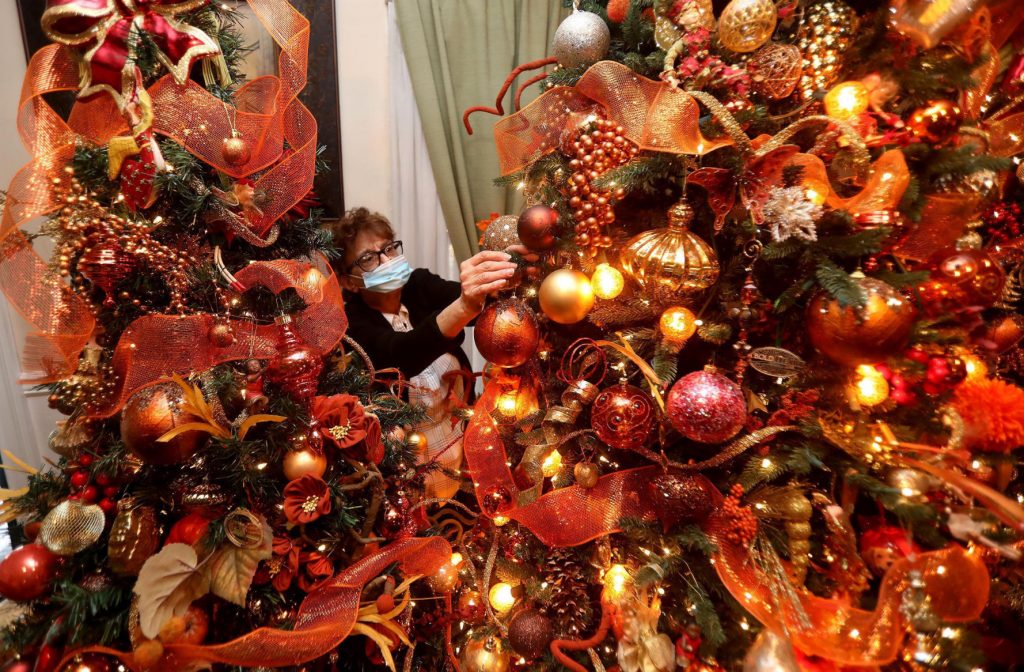 Tom Egan, known as Tucker to mostly everyone, helps his wife take down almost every tree, among her other boxes of decorations, from their attic each year. It takes about two to three weeks for her to finish everything, he said, and he knows how much it means to her. It means a lot to him, too.

“I love it,” he said, standing in the couple’s living room surrounded by his wife’s creations. “I do like Christmas, but I love (her decorations). This makes her happy. If that’s what makes her happy, then I like it.”
The couple’s grandchildren – Tyler, Sam and Emma Egan, and Stephen, Julia and Angelina Tabone – also help with bringing down the trees and decor every year.

“If they want presents, they know they have to help,” Egan joked. “Oh, I’m kidding. I love them. They’re good kids.” 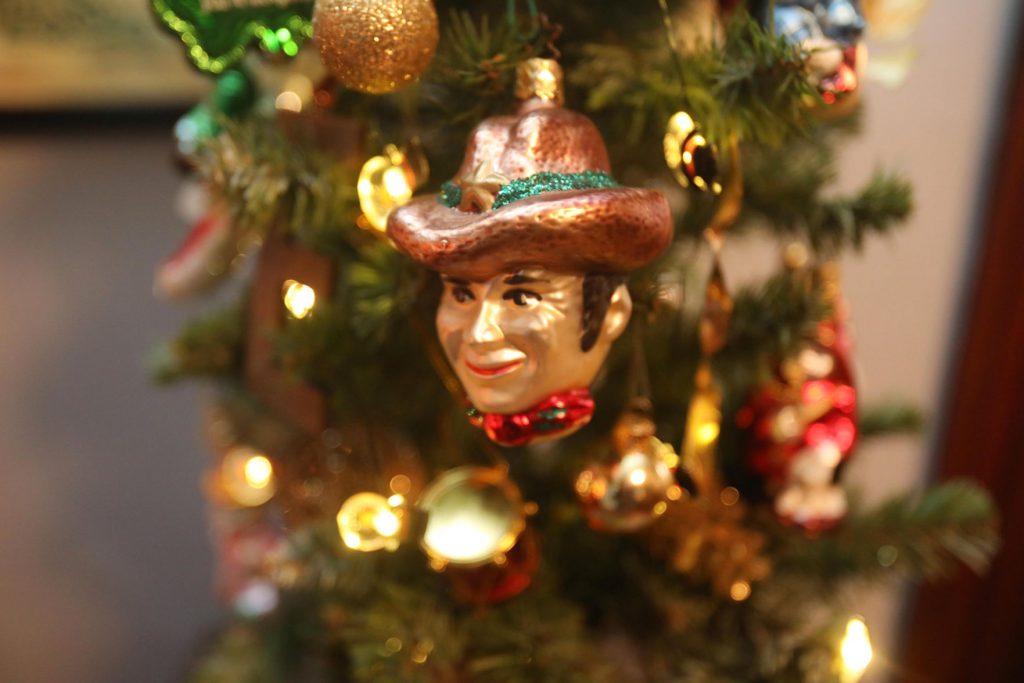 When Egan was growing up, her family didn’t always have its own Christmas tree. Her parents, the late Mary and Sam Graziano, would pack up Egan and her brothers – the late Dominick, Sam and Frankie Graziano – to visit her dad’s sister and stay with them in Syracuse, New York. The family celebrated Christmas there, she said, so they didn’t need their own tree.

As the years went by, though, the Graziano family began spending the holiday at home in Northeast Pennsylvania. Along with that came their own Christmas tree, decorations and traditions. When Egan married and they had four children of their own (Rosemary, Tommy, Sam and the late Sean), she passed on those traditions.

“We would always have to get the tree, and it would have to be the biggest tree we could find,” she said. “Every year, we wanted it bigger than the last.” 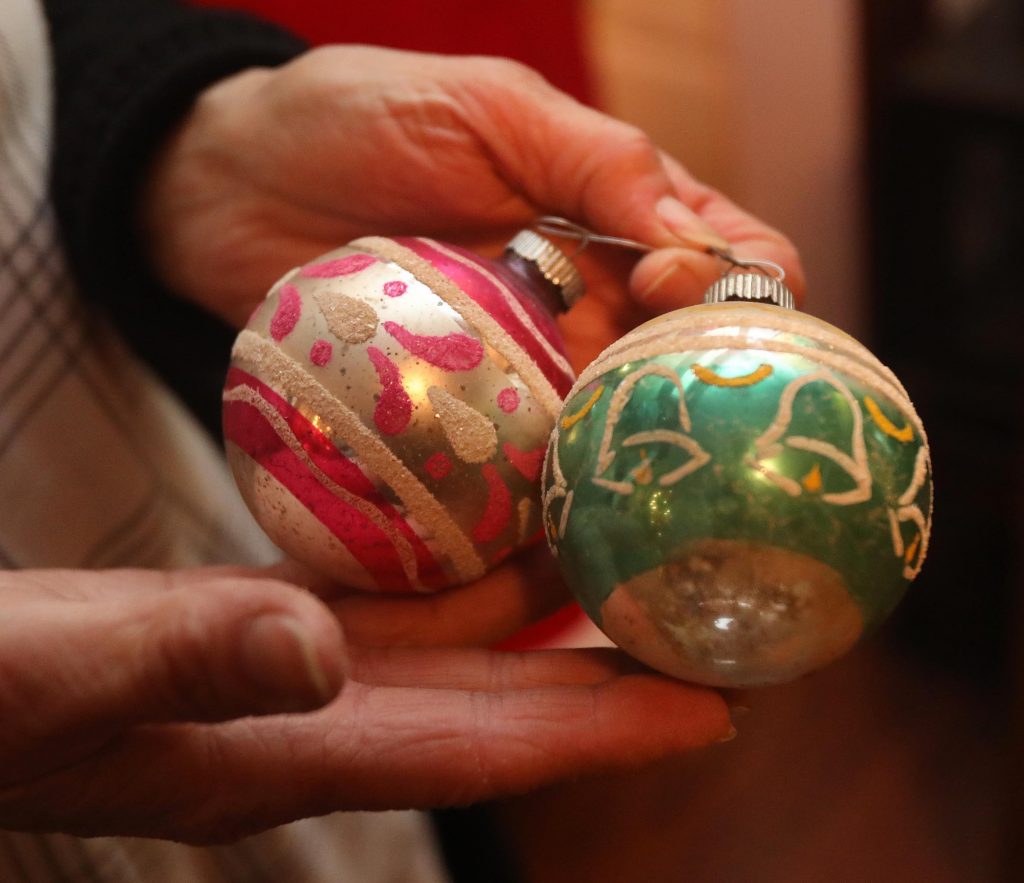 Egan also owned Changes Unlimited, a salon and spa on Main Avenue in Scranton and was known for her lavish window displays, especially around Christmas.

Egan has filled her home with Christmas trees for more than two-and-a-half decades. She adds more each year, whether from shopping trips with friend Joanne Hill or through gifts from friends or acquaintances who know she collects Christmas trees. Each piece has a story or memory associated with it.

“It’s pieces of memories and of life,” she said. “Everywhere I look, I think about a story or a person, and some of them I just like the way they look. … They mean something to me, though.”

Though she looks forward to Christmas each year, this one is different. Typically, Egan would host her entire family for Christmas Eve dinner as well as friends who over the years have become family such as her “dear friend” Ann Marie “Priscilla” McAuliffe. The house lights up into the night, glowing with warmth and bustling with visitors coming and going.

This year, though, the holiday will be smaller and quieter to ensure everyone’s safety, Egan said. While, like many people, she’s disappointed, she sees bright spots. Egan began decorating her home earlier than ever this year because “there was nothing else to do,” she said with a laugh. Lots of people started to decorate their homes before Thanksgiving this year, she noted, because it makes people happy and joyful. It also makes them feel hopeful, which “we could use right now,” she said. 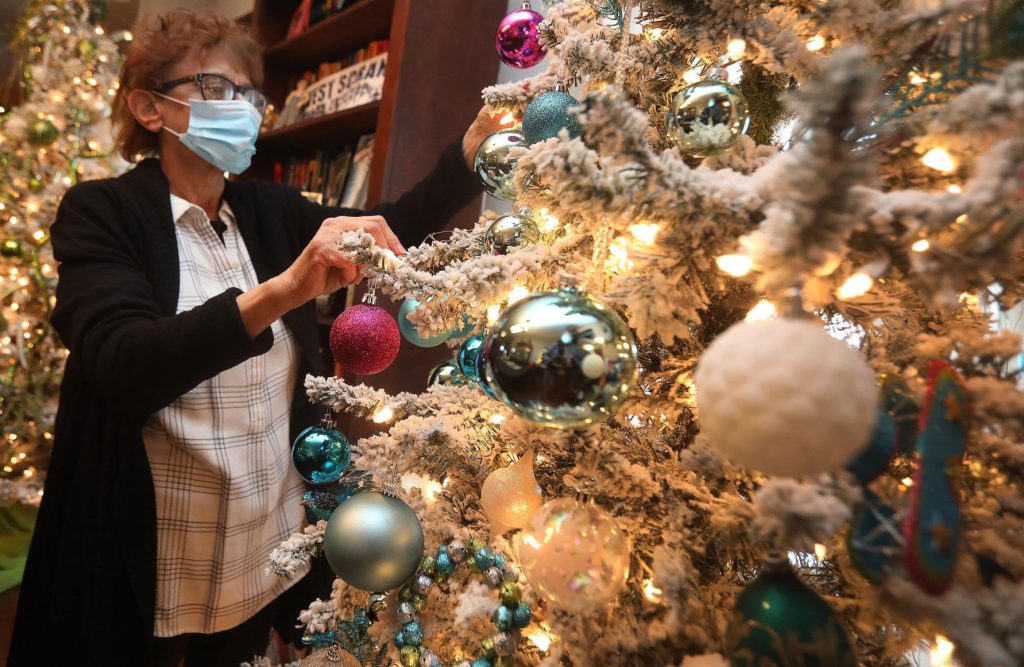 Christmas ignites those feelings and, even for just one day, makes the world feel like it’s filled with magic.

And Christmas is her holiday, she said.

Residence: West Scranton
Family: Husband, Tom “Tucker” Egan; children, Rosemary Tabone; and Tommy, Sam and the late Sean Egan; grandchildren, Tyler, Sam and Emma Egan and Stephen, Julia and Angelina Tabone
Employment: A retired salon owner
Objects of her affection: Egan loves Christmas and fills almost every inch of her home’s downstairs with decorations, including 42 Christmas trees of all different sizes and varieties inside and 16 on her front porch.

Teacher raising money for late students' family
The fashion, beauty and symbolism of the Inauguration's looks
'From this house': The storied past of Joe Biden's childhood home
Access NEPA's 2021 Fan Favorites poll