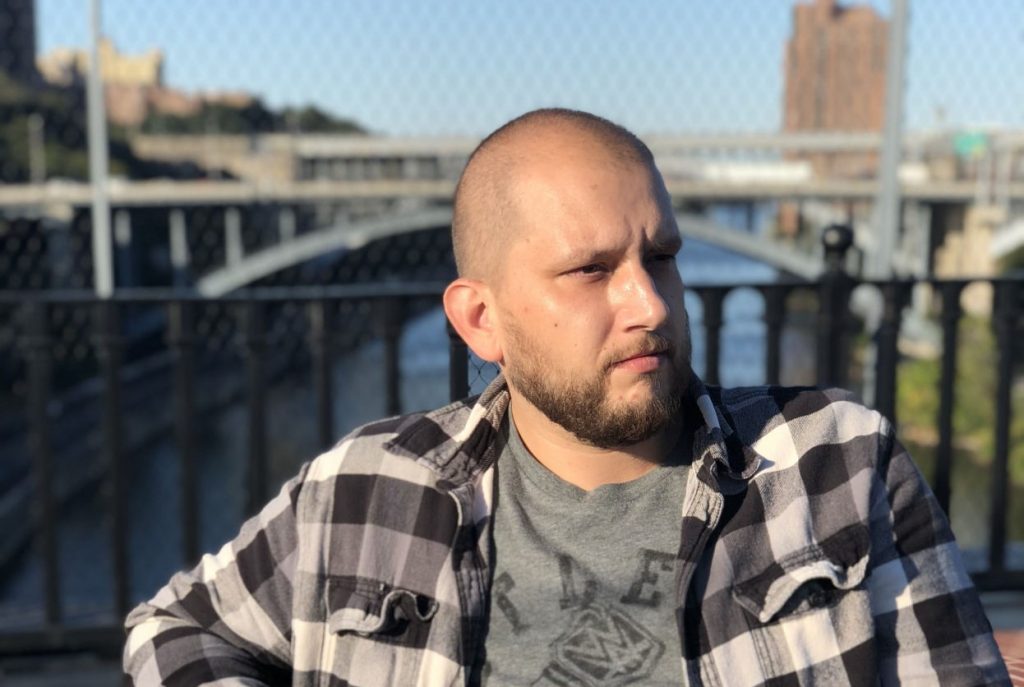 As an art director and member of a production’s art department, the West Scranton native and the team he works with are responsible for creating the overall look of a film or television show. They’ll work with the director to design, build and decorate sets. The art department is mindful of every little detail to support the creative vision of the project, from the largest part of the production such as the color of the walls to the tiniest details, like the magazines scattered across a desk in the background.

“Without the art department, all you have are actors in front of a black screen,” the 37-year-old said recently by phone while commuting to his home in Brooklyn, New York. “We create the world in which the characters live, from their furniture to the props. Anything like that you see is there because of the art department. It gives color to the world the actors live in.”

Bruno’s credits include “Orange Is the New Black,” “The Flight Attendant” and “Kevin Can Wait.” Most recently, Bruno served as art director for the Netflix comedy “The Crew,” starring Kevin James as the crew chief of a NASCAR garage.

While Bruno loves to go to work each day, he almost didn’t get the chance. A 2001 West Scranton High School graduate, Bruno enrolled at Temple University to study film. After his freshman year, however, he discovered he had an inflated left atrium and needed heart surgery, which took place Sept. 10, 2001. As Bruno recovered in his hospital bed the next day, he watched as terrorist attacks happened around the country.

“It was the most surreal experience I ever had,” he said.

Bruno noted he skated through life over the next few years, getting up each day, going to work at a regular 9-to-5 job and coming home, all while not feeling fulfilled. Then, he got a wake up call in the form of Ewing’s sarcoma, a form of cancer, in his left lung and rib. He endured 10 months of chemotherapy followed by surgeries, which included removing a third of his lungs and two of his back ribs. While he felt scared for his own life, he mostly worried about his parents.

“When your first-born child has cancer and you have to see the look on their faces when they’re being told that, that’s almost as upsetting and traumatic as finding out you have it yourself,” he said.

Bruno called his treatment process brutal, as he lost all of his hair and gained up to 50 pounds from steroids doctors put him on. Mostly, he felt exhausted every day. After almost a year of this, he started to look at his life and wondered if something more awaited him. Finding out his cancer was in remission left him ecstatic, but he also realized he had more work to do.

“It’s obviously an amazing feeling, and I remember realizing that I wanted so much more,” he said. “‘Now what do I do?’ I was 29 years old, and at that moment, I had to face reality: you didn’t do the thing you wanted to do in the last decade. What do you want to do with your next decade?”

Bruno then enrolled at Temple University again to finally finish his film degree. While in school, he broke into the business working right in Philadelphia on the film “Split,” starring James McAvoy and directed by Pennsylvania native M. Night Shyamalan. After Bruno graduated, one of the second assistant directors from his past project called him about a job as a production assistant in New York City on Amazon’s “The Tick.” He jumped at the chance — even if it meant moving to the city on short notice.

Bruno lived in a hotel for a few weeks before settling into Brooklyn. Not long after, he got a job working on “Orange Is the New Black” and then “Alex, Inc.,” an ABC comedy starring Zach Braff, where he got a spot in the art department. Under the art department’s umbrella, Bruno’s boss, Jane Musky, emailed the team about making up names for a fake company to use on props. Immediately, Bruno shot back no less than 30 ideas. He then learned it was above his position to do this, but it impressed Musky, who started to give him more and more opportunities in the movie. Bruno met many others in the business who were impressed by his hard work and initiative, including Wendell Johnson, whom Bruno considers to be his mentor.

“I’ve been fortunate enough to work with some amazingly talented people and learn so much from them,” Bruno said. “A big part of any job is watching others and seeing how they do it and learning from those experiences. (My mentors, especially Johnson,) taught me how to run an art department and how the environment should be. We should all be excited to get out of bed and come to work in the morning. Yes, it’s hard work, it’s still work, but it overall should be fun, or what are we doing?”

As his career went on, Bruno landed more gigs that let him work his way up the ladder. Projects included “Set It Up,” a Netflix romantic comedy starring Taye Diggs and Lucy Liu, for which he was art production assistant, as well as military courtroom drama, “The Code”; HBO Max’s thriller “The Flight Attendant,” starring Kaley Cuoco; and “Kevin Can Wait” starring James, all as art department coordinator.

Bruno got his first taste of art directing on the Hallmark Channel holiday movie, “Christmas Camp.” Filmed in New York’s Hudson Valley, the project felt a world away from New York City, Bruno said. It also had a small budget, but Bruno took everything in stride and honed his skills as an art director. Then, Johnson reached out to say James was starring in a new series called “The Crew.” Johnson was doing production design for the series and wanted Bruno to art direct.

“The Crew,” halted production for a few months during the height of the coronavirus pandemic. The uncertainty made for a nerve-wracking time for everyone in the industry, especially Bruno, who fought so hard for a second chance at his career. “The Crew” premiered on Netflix in February, however, and Bruno already has other projects to work on — some of his own and a Netflix film, “The Noel Diary,” starring Justin Hartley of “This Is Us.”

After how hard he fought for a second chance at his career, Bruno doesn’t plan on slowing down.

“If I’ve learned anything after all of this — and I know it sounds so cliché, but I really mean it — it’s that you’re always stronger than you think you are and you’re never too old for anything,” he said. “If you want to take a chance on a whole new career, life doesn’t stop at 25. … I basically had to start over at 30, and I did it. Pick up that book, teach yourself that skill. Don’t let anything get in the way of your happiness.”