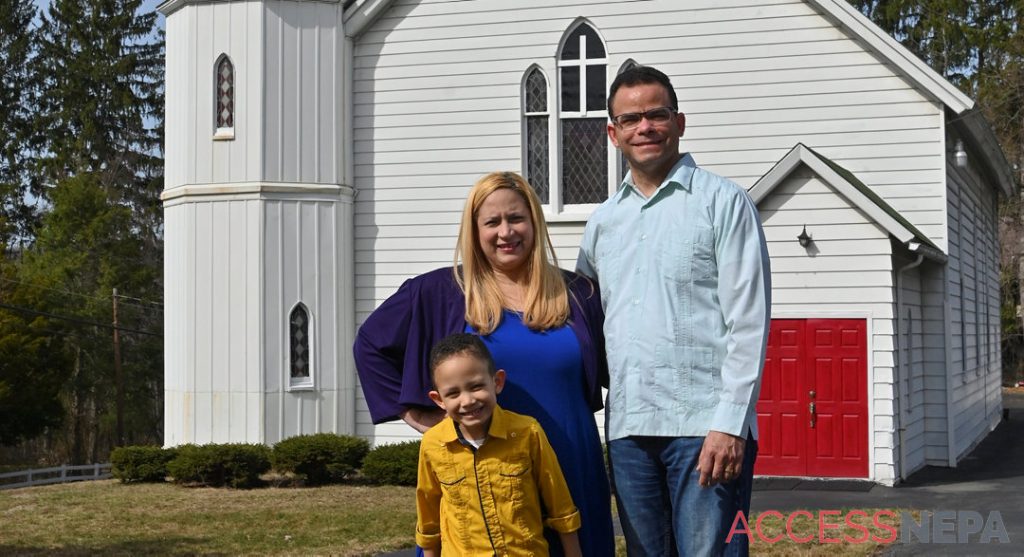 Perhaps it wasn’t a coincidence when two pastors and their son ended up checking out a Waverly church while exploring the region last fall.

Today, they celebrate their first Easter as the leaders of that congregation.

The husband-and-wife team of Melquisedec “Mel” and Wendy Nunez Took over as pastors of Waverly Community Church on Jan. 1 after spending the last seven years ministering in Montgomery County outside Philadelphia. But in the autumn, their superintendent in the Free Methodist Church called them with news about a great opportunity that had arisen at a church in Northeast Pennsylvania. Eager to see the area they might move to, the Nunezes hit the road with their son.

“We were checking different churches in Google because my pastor never told me what was the church,” Mel recalled. “But when I saw on Google (the church in) Waverly, I told my wife, ‘Wow, that church — I would like to go there.’ It was a great surprise that was the church (the superintendent meant).”

“Everything’s been wonderful. … It was definitely God’s will for us,” Wendy said.

Both originally from the Dominican Republic, the Nunezes have a long history of love for God and the different communities they’ve served.

As a kid, Mel gathered with his parents and siblings each morning to pray and read the Bible, and he started ministering to others 29 years ago when he was just 13. He went on to earn a degree in theology from the Bible Institute “Ark of Salvation” in the Dominican Republic and a master’s degree in Christian counseling from UNPI Christian University, New York.

Wendy, meanwhile, has a bachelor’s degree in liberal arts from the University at Albany and studied for a master’s degree in social work at Long Island University. She has worked in the social work field for 14 years, serving in roles including case manager and supervisor and doing a lot of work with women and children.

Mel moved to the United States to work as an assistant pastor with his brother-in-law at the Brooklyn Christian Center in New York. He and Wendy met in America eight years ago, married a year later and now have a boy, 6-year-old Daniel.

The Nunezes eventually moved from New York to the Philadelphia suburbs.

“We had a lot of opportunities in Montgomery County,” Mel said. “That is a great place to do ministry.”

But they found a lot to love in NEPA as well. During their trip here last fall, they visited not just the church but also sites like Lackawanna State Park (they enjoy walking, running and biking) and even grocery stores to get a feel for the area. They like its quiet, laid-back atmosphere and realized they would love to minister there, Mel said.

The Nunezes then met with various leaders in their denomination and locally before getting the OK to serve the congregation. While coming to a new community during a pandemic was challenging, Wendy said, they felt it was God’s plan to send them there.

“We are grateful to God for being here,” she said.

The Nunezes have focused on revival in their work and want their congregation to know God’s presence and love and to grow in their faith.

“Part of that revival is we are praying to bring deliverance, restoration, salvation and healing — emotional and physical healing,” Mel said.

But they also emphasize hope in God and encouraging others to not be afraid. God never promised that people wouldn’t face problems, Wendy said, but he did say they would overcome them.

“I believe that we all have a plan in this life … and the Lord is guiding us,” she said. “(On) this journey, we’re going to go through struggles. We want to give hope to people. … The hope that we have in Jesus is the hope of a better future.”

The pandemic in particular has caused pain and sorrow, but Wendy believes there is a light at the end of the tunnel. She called herself and her husband “a good team,” and they hope to inspire others “to have faith and to not have fear of the future.”

Kevin Ryczak, a trustee with the church, said he just enjoys being around the new pastors.

“They’re great people to talk to,” he said. “They really have a heart for the church and for people. They have a lot of love for Jesus, and they just exude that when they come out. The sermons are great. They have great content and get a lot out of it.”

The Nunezes already have made an impact in Ryczak’s eyes. The dynamics of the church have changed since they arrived, he said, and they have ideas for improvements and already upgraded the equipment that allows the church to stream its services on its Facebook page for those who cannot attend in person. But Mel see’s God work in that rather than his own, as a donor just happened to give the exact amount of money they needed for that project.

Some people started coming back to the church recently, too, Ryczak said. The congregation has about 20 members, and he hopes that having a couple like the Nunezes will draw in not only more young people to the church, which skews older, but also members of the local Hispanic population, since the couple is bilingual.

“It is a very small community, (but) it seems to be growing,” Ryczak said.

And Wendy sees a certain appeal in that small community. In a bigger church, it can be easy to hide, she said, but smaller congregations like theirs lend themselves to better relationships.

“I think there’s opportunities for us to get to know each other better and have that family,” she said. “I come from a place where we’re family, where neighbors are family, communities are family. … It’s not a big church where you go and nobody know who you are (and) you’re just a number.”

They just want to grow together and learn more about God, which is possible through programs like the weekly women’s brunch, Wendy added. They also hope to form a children’s ministry and maybe even add a bilingual service depending on how the congregation grows, Mel said.

Overall, they see the opportunity to lead a historical church as an honor and privilege, Wendy said.

“We’re humbled (by) how many amazing people have preached here before us,” she said. “It’s very humbling, and we’re grateful to know that God has chosen us.”

The Nunezes live by the church and said their son has made some friends and is doing well in his new world. The congregation has a lot of great people, Wendy noted.

“It’s not a big church, but they are so faithful, and they’re so generous,” she said, adding that it has touched her heart. “The Lord is making me grow in my faith even more. I think that’s His powerful hand doing this.”