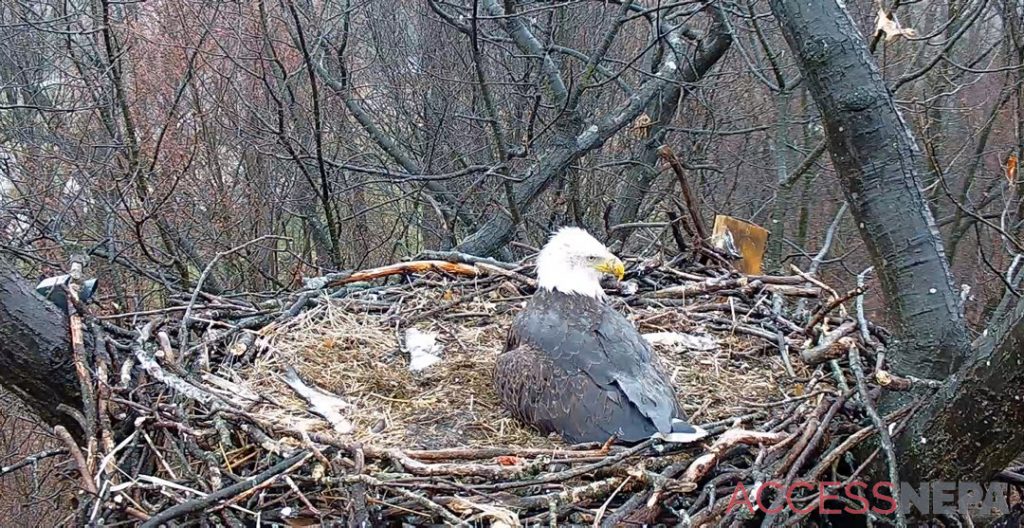 The public can once again watch a pair of experienced bald eagle parents care for their newly hatched young near Codorus State Park near Hanover in Southcentral Pennsylvania.

The first bald eaglet arrived early in the morning of March 13, the first of two that had been expected this year.

“This chick seems to be very healthy and vigorous,” said Hanover-area birding expert Karen Lippy. “It’s very aggressive about feeding — and sometimes they’re not — but it certainly seems healthy and ready to grow.”

Watching live via the eagle cam, viewers have been waiting with anticipation for the eggs to hatch. The nest camera has been followed closely since it was installed by the Pennsylvania Game Commission in 2015. It is now sponsored by HDOnTap.

Liberty, a 21-year-old eagle, has nested in Hanover since 2003. She has been the mother to 21 chicks and has had three different mates. The most recent mate, Freedom, has fathered seven eaglets.

“They are experienced parents and know what to do when raising a chick,” Lippy said.

Through the eagle cam at Liberty and Freedom’s nest in Hanover, many people from across the world have observed the pair raising chicks over the years. The camera has been a valuable educational tool, Lippy said.

“It was a pretty big miracle when they put the camera in the nest,” she added.

Through conservation efforts, bald eagle populations have made a comeback — with both positive and negative consequences. While populations have steadily increased in recent years, less available territory has created conflicts between rival eagles.

“It’s wonderful to see so many out here, but territories are limited,” Lippy said, adding that pollution or noise can disturb where bald eagles call home.

She said she hopes the eagle camera will bring more awareness to the bald eagle population and conservation groups dedicated to protecting them.

“People have always been excited to see eagles,” Lippy said. “The fact that it’s our national symbol touches people.”

— The York Dispatch via Associated Press