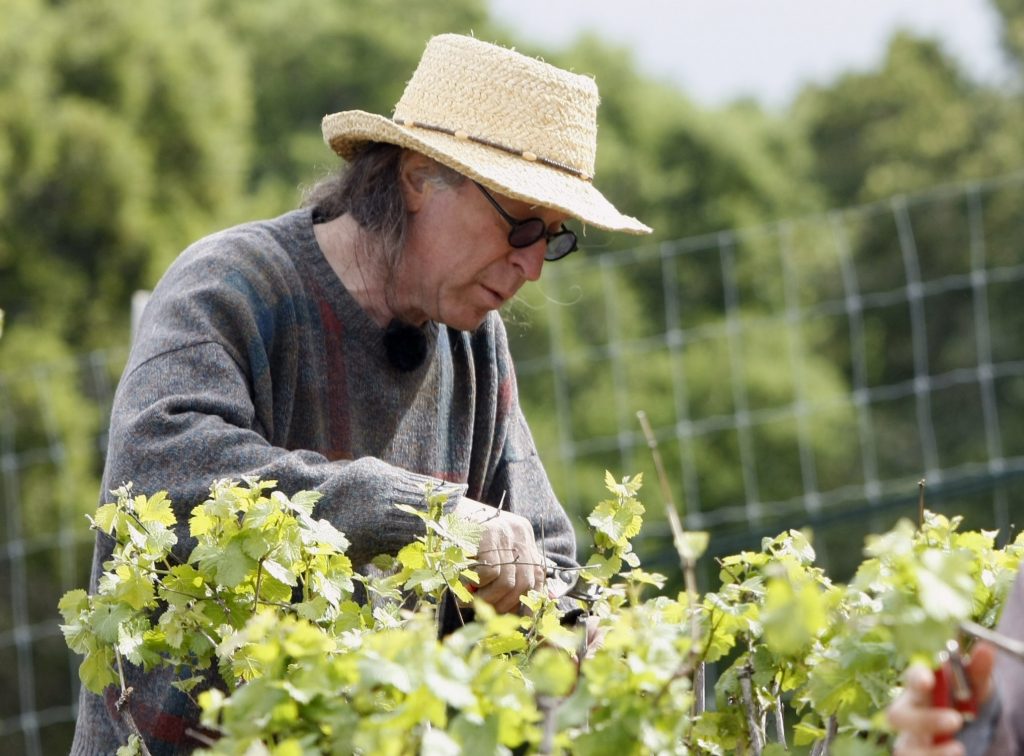 As he began a talk at the American Wine Society National Conference in November, the recipient of organization’s Award of Merit shared stories of his failures.

With an eccentric and experimental approach, Grahm set up some spectacular failures, which he defuses by joking about them, but also great successes.

He’s not afraid to admit that making good — let alone great or unique wine — is hard and expensive. He’s the pony-tailed pioneer who popularized Rhône grape varieties in the United States, the first so-called Rhône Ranger. As natural corks betrayed his (and other’s) wine with a high failure rate, he was the first to switch wholesale to Stelvin screw caps for his Big House wines (a brand he later sold). The experts said consumers clearly preferred natural cork to screw caps. Grahm found that while the preference may have been real, consumers also were reasonable, and screw caps are now a fixture and, for many wines, the most appropriate closure. He held a funeral for the cork in San Francisco and New York.

Grahm is best known for his Le Cigare Volant (the French term for what Americans would call a flying saucer), an homage to the blends of Châteauneuf-du-Pape. When doing historical research in Rhone, he found that during the UFO scares of the 1950s, town fathers adopted an ordinance that prohibited UFOs from landing in Châteauneuf vineyards, an ordinance Grahm pointed out has been remarkably effective. The would-be woodcut label on Le Cigare, however, suggests otherwise.

Powerful without being overwhelming and rich without being heavy, Bonny Doon Vineyards 2012 Le Cigare Volant Red Wine of the Earth smells of dried berries with flavors of dark fruits and spice with a hint of cordial cherry. The finish is feather-light and clean in this blend of mourvèdre, grenache, syrah and cinsaut. $28 (usually between $35 and $40). ★★★★ 1/2

Grahm is retiring this style of Le Cigare for what he straightforwardly admits will be a mass-produced version. While he loves making expensive wines, people don’t like buying them — a shortcoming of his business plan, he said. The new, down-cycled Cigare will become the alien-abducted cash cow for future highly priced projects, most likely emerging from Popelouchum, a new vineyard plant with new varieties of grapes he crossed in-house.

Based in Santa Cruz, California, Grahm left his mark on wine in another way, with his wit and sense of humor. He showed that good wine needn’t take itself too seriously and could even be fun or send people to Google his literary allusions. His smart lightheartedness cleared a path for the approach of brands such as d’Arenberg, Cronic Cellars, Middle Sister, Smoking Loon and scores of others.

He desperately wants people to like him and his work and remains bothered that certain critics — Robert Parker and the Wine Spectator’s James Laube — do not give his wines the sort of attention he thinks they should. One of Grahm’s slides read, “I’d rather have a frontal lobotomy than a Laube in front of me.”

He received much affection and two standing ovations at the AWS conference. While Grahm appreciated the award, typically given for a lifetime of contributions, he noted there is much left to be Doon.