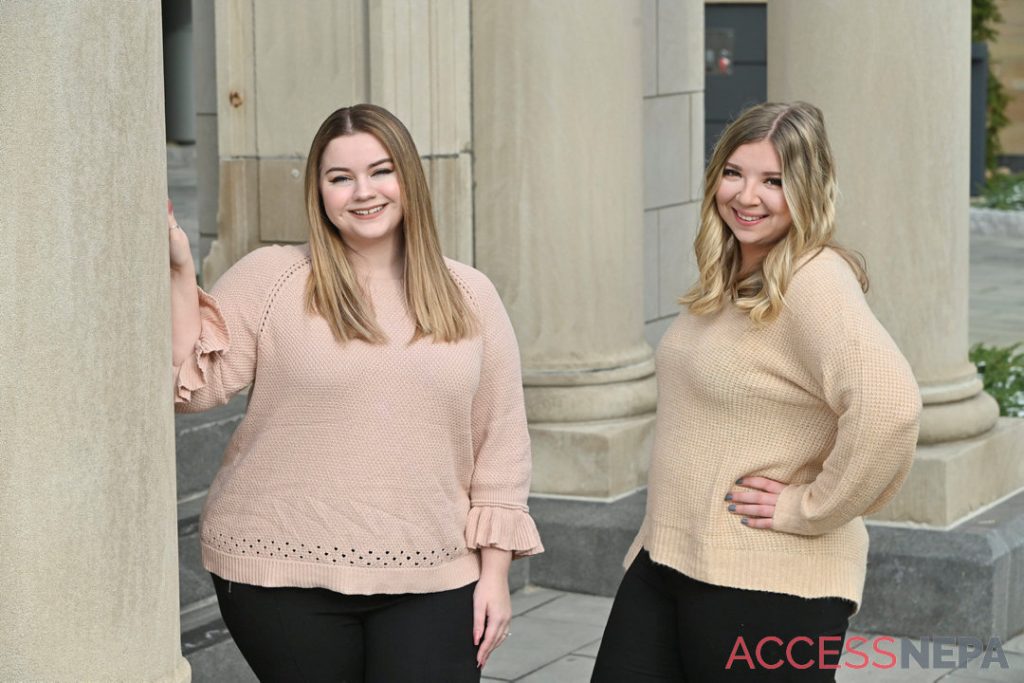 Local women in need have one less problem to worry about, at least temporarily, thanks to the effort of two University of Scranton students.

Gianna M. Brown of Scranton and Amanda Taylor of Old Forge didn’t know each other until last semester, when their graduate studies in clinical mental health counseling at U of S threw them together. After working on another project for Dr. Tiffany M. Bordonada’s Professional Issues for Counselors course, they decided to team up for another — an advocacy project that would raise awareness for an under-represented population, Taylor said.

The two decided to help the homeless population, but their effort wasn’t the typical clothing or food drive. They looked instead at providing feminine care products, a largely unnoticed need.

“With my undergraduate (studies), I did a capstone project for my minor, and I (focused on) feminine care products within the prison environment,” said Brown, who earned a bachelor’s degree in criminology and sociology with a minor in women’s and gender studies from Wilkes University. “And that kind of opened my eyes to how low resources are with this and how it’s not a topic that’s not usually talked about. And talking about the homeless community is important.”

A lot of people don’t realize that homeless and underprivileged women’s needs include tampons, panty liners and menstrual pads, said Jenny Blanchard, development coordinator for the Catherine McAuley Center, the beneficiary of Brown and Taylor’s project. For the women the center serves, those products are luxuries, Blanchard said.

“They may seem like very basic necessities, but they’re expensive,” she said. “And most of our clientele has very limited income, and those items are not covered by food stamps.”

The Catherine McAuley Center runs emergency homeless shelters for women and children, a food pantry, furniture bank and other programs, such as low-income housing for single women and a transitional housing program for women leaving prison. Based in South Scranton, the center also has an emergency shelter in Plymouth that serves women in Luzerne County. At Christmas, the center runs an adopt-a-family program and interviews families to find out what they need.

“Generally, the mothers will give the wish list for their children and then say, ‘Oh, I don’t need anything. Don’t worry about me,’” Blanchard said. “One mother wrote ‘feminine products,’ which is hardly a Christmas present. It shows how needed they are, and I think doing these donation drives is also a way for students … to learn about issues like this and homelessness and what are some of the day-to-day struggles that households have.”

Through their research, Brown and Taylor learned about how homeless women who don’t have the means to buy feminine care products often turn to the garbage to find paper to use instead, or go to a public restroom and improvise with toilet paper or paper towels. And if those options don’t work, Taylor said, they’ll use some of their own clothing as makeshift pads.

“That was really disheartening,” she said.

And for homeless women who have children, Taylor said, the problem can be worse, as the women face the choice between buying feminine products for themselves or feeding their children. It all can have an even greater impact.

“We learned in our undergraduate and our graduate studies a lot about the mind-body connection and how those two things really feed off of each other to make up a person’s overall level of health and wellness,” said Taylor, who has a bachelor’s degree in psychology with a minor in sociology from Temple University.

People might feel scared to talk about menstruation issues or just don’t really care to learn about them, Brown said, and so the need for these products doesn’t get attention. For women, menstrual care is a struggle everyone knows and understands, Taylor said, but some people, and particularly men, were surprised to learn about the need for help among homeless women.

“It’s really interesting but also not maybe that surprising that the male response was much different than the female response,” Taylor said. “I guess that can be more attributable to if you’re a male, this is not something you deal with every month. … Guys that I spoke with or people that I was just explaining this project to that were men were like, ‘Wow I guess I never really thought about that.’” 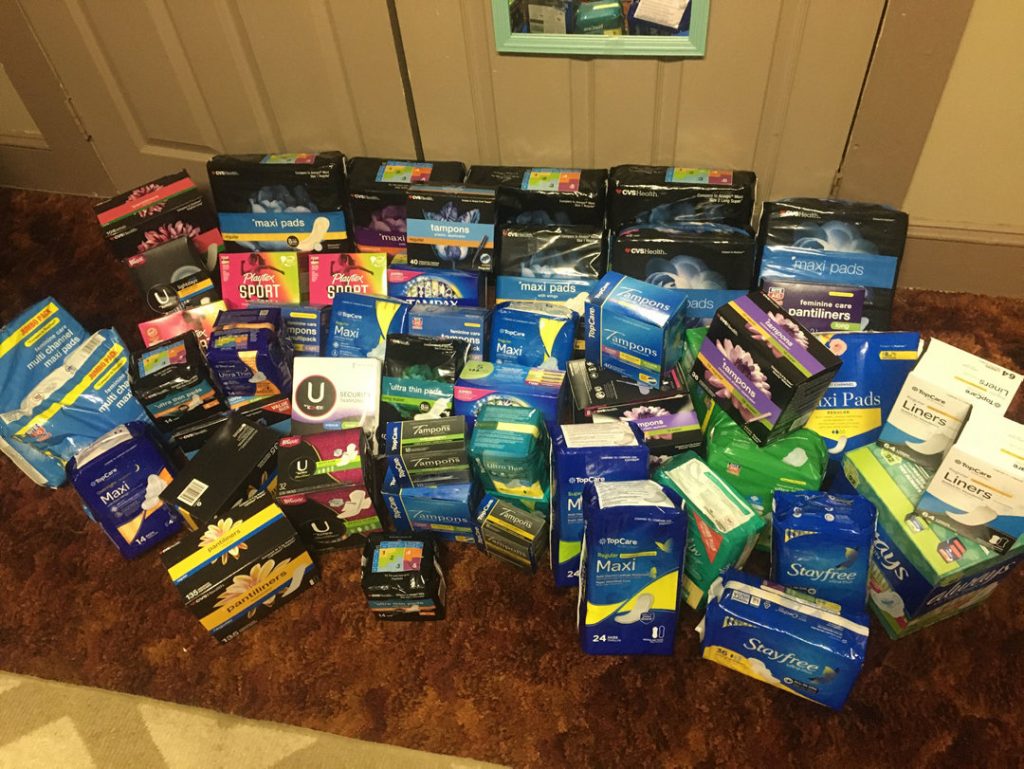 Advocating is a huge part of counselors’ professional identities, Brown said, and their class aimed to teach them how to advocate for clients. Brown and Taylor modeled their effort to collect money and products on the Michigan-based program Helping Women Period. Working on the project over Zoom since they couldn’t meet in person because of the pandemic, they set up a GoFundMe page that people shared 90 times and which brought in $165.

“People really did care, and we had family friends and people I hadn’t talked to for years from high school and middle school sharing this on Facebook,” Brown said.

Additional donations from friends and family brought the total raised to $210, and the U of S’s Jane Kopas Women’s Center donated 1,000 products to the project, which Taylor said “really helped up the amount we already had.”

“I was so grateful that people could even give during the pandemic,” Brown said. “We know it’s a really hard time right now for a lot of people. Every penny helped. It really did.”

“It was really an honor and an inspiration to see … so many people support us,” Taylor said. “We didn’t know, with everything that’s going on with COVID, are people going to be able to donate (or) do people in the community have the resources.”

Brown and Taylor finally met in person when they dropped off the donations at the McAuley Center, where the gratitude they encountered helped them realize the true extent of what they accomplished. Knowing the center could use the products, and just how big of a difference they would make in women’s lives, “felt really great,” Taylor said.

“(Blanchard) was so overjoyed because not many people to begin with really think about bringing these sorts of products to homeless shelters or to women’s shelters,” she said. “And on top of that, (with) COVID-19, donations are just sort of scarce.”

Blanchard described local universities as “a major source of help and support” for the McAuley Center.

“Our families need the same things that every family needs when they’re creating a household and creating a home,” Blanchard said, adding that items the center needs vary from month to month. “The best thing to do is really to contact us and ask what is one of our most-needed items at the moment.” 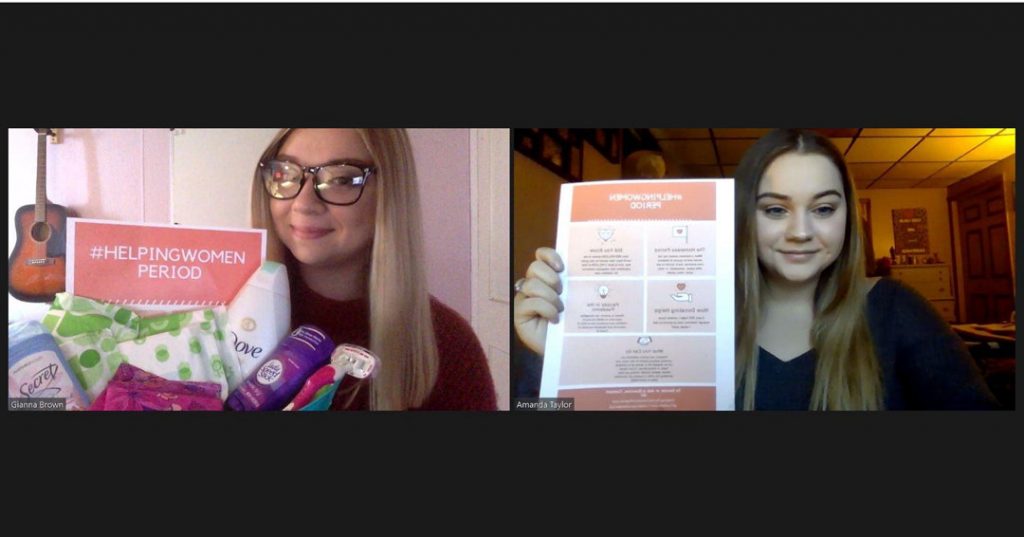 SUBMITTED PHOTO
Gianna Brown, left, and Amanda Taylor, graduate students at University of Scranton worked on their project over Zoom because of the coronavirus pandemic.

The students hope to become licensed professional counselors after earning their graduate degrees, and both said this class project will help them down the road.

“It was very informative,” said Brown, who hopes to counsel adult inmates or residents of juvenile centers. “It really taught me the skills needed to learn how to advocate for a specific group and why you should advocate for people, especially people who can’t advocate for themselves.”

In the meantime, they’re looking into holding more fundraisers like this yearly or even each semester.

“This was a fun project. This was something that gave us a lot of joy among the chaos and climate we’re facing right now,” Taylor said. “It really made a difference, and we could see (the) importance to the Catherine McAuley Center. More than anything, I think it really helped people in the community stop and think about why the matter is so important.”

It’s been heartwarming to know they made a difference, Brown said.

“Even though it might not seem like this glorious and big difference … everything counts,” she said. “Every little thing counts.”

Anyone interested in donating items or organizing a donation drive for the Catherine McAuley Center, Scranton, should call Jenny Blanchard, development director, first at 570-342-1342. Because of the coronavirus pandemic, the center has strict rules about what it can accept.