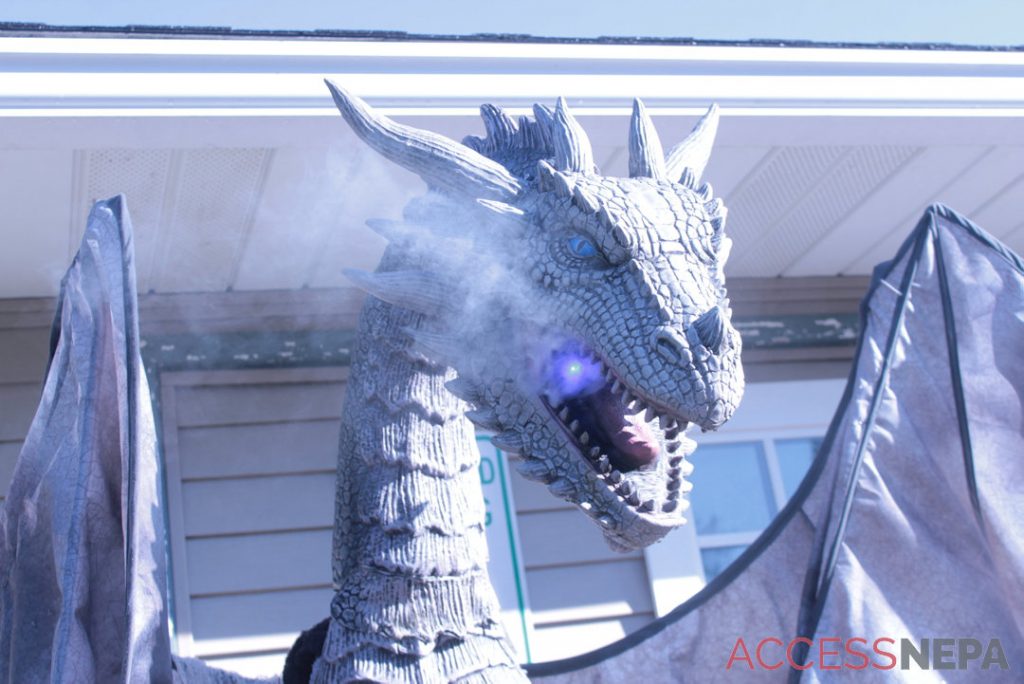 For the Meshoppen resident, Halloween is more than just another holiday. One look at her yard on Briar Ridge Road, which also has the skeletons of flamingos and dogs, confirms this.

“It is my favorite one,” she said, giggling like a child who just received a full-size candy bar when trick or treating. “I have always decorated for it.”

St. Clair, along with her boyfriend, Jason Carter, and her son, Cole Rinkus, decorated their yard to enchant all who dare — complete with caged bodies hanging from a tree limb.

The smoke-breathing dragon, who spreads his wings and turns his head to survey the complete scene, sits outside her home business, Siren Salon.

“I let my clients know before they show up that I began decorating, and they are almost as excited as I am,” she said. “At first, I thought the smaller kids might get scared, but since they see it all in the daylight, and go up and touch them, they know it is all pretend. I even let them hit the buttons.”

Not a fan of scary movies or practical jokes, St. Clair purposely does not make her yard extremely terrifying.

“The statues and decorations freak the cats out, but that’s about the scariest we get,” she said with a laugh. “I have always had such great Halloweens when I was a kid, it was so much fun to get dressed up and see everyone. My mom made sure we all had pumpkins and candy, and it was just so innocent and wholesome. That’s what I want here.”

“I can’t even imagine what cars going by were thinking, as I was chasing my dog around the yard while he had a pelvis bone in his mouth,” she said blushing. “They didn’t know it was a prop.”

She has loaned her collection to the HalloWine Fest organizers, but since the holiday falls on a Saturday this year, they will remain in place.

All told, she estimates she has over $2,500 invested and plans to expand her scene.

“I really wanted to get the 12-foot skeleton they had at Home Depot, but I had to hold off,” she said. “But, since I don’t decorate for any other holiday I feel it is OK.” 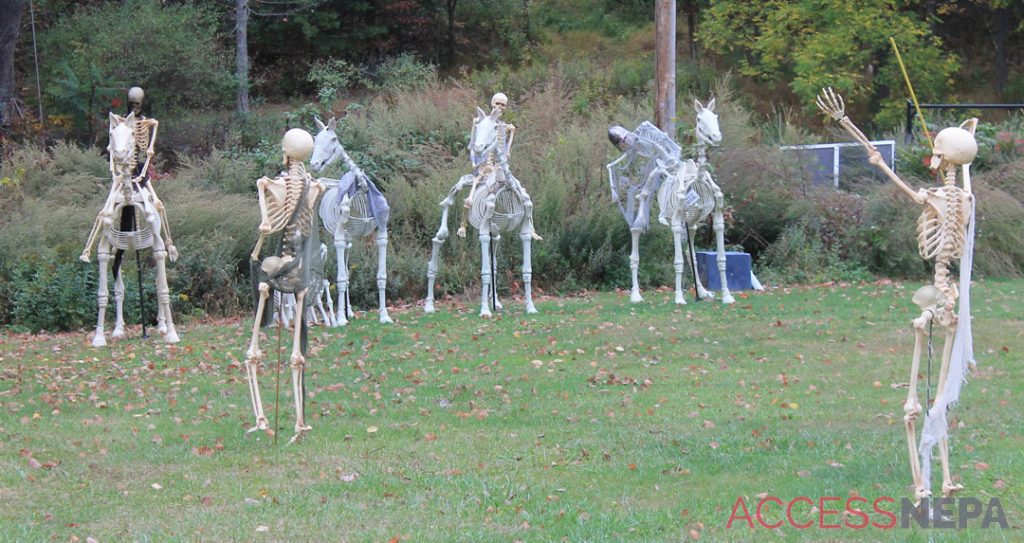 Rinkus, 16, wants to add to next October’s plans by placing a fishing skeleton in a canoe in their pond, with a bony fish on the line.

“He comes home from school and wants to rearrange some of the pieces,” she said. “He always has new ideas for them.”

On Halloween night, St. Clair will open her yard to visitors from 5 to 7 p.m.

“I want people to be able to just enjoy it as much as I do,” she said. “We will have candy, trick or treating, spooky music, and lots of photo ops.”

St. Clair won’t divulge her costume plans, but assures that it will be lighthearted and fun.

“I love to see how people react to the decorations,” she said. “Their smiles make me smile, and that makes me happy.”