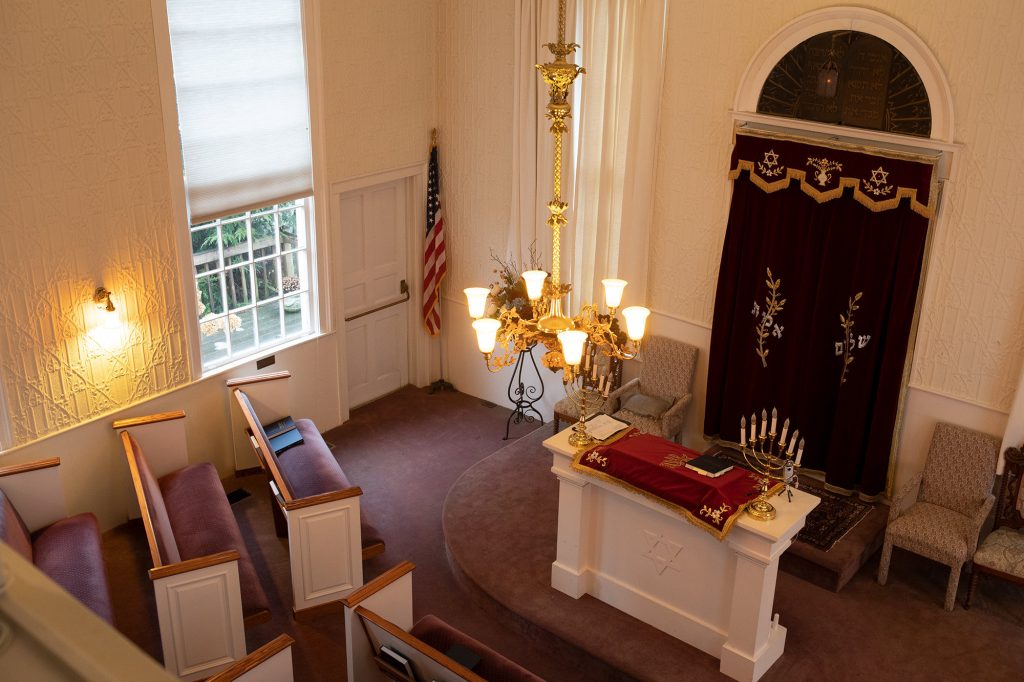 You’d hardly be the first person to mistake the little white building along the Lackawaxen River for a church. After all, it has all the details of an old-fashioned chapel — a small, simple footprint and unassuming visage with a steeple marking it as a place of worship.

A closer glance, however, reveals its truth, one stretching back more than a century in the heart of Wayne County. Congregation Beth Israel, 615 Court St., celebrates its 170th anniversary this year from the building with a star of David atop its steeple.

And as members of that Jewish community — which still has several members who can trace their ancestry to its founders — stood in the cozy synagogue with unique historical features on a recent morning, they pointed out that it continues to not only survive but also thrive. 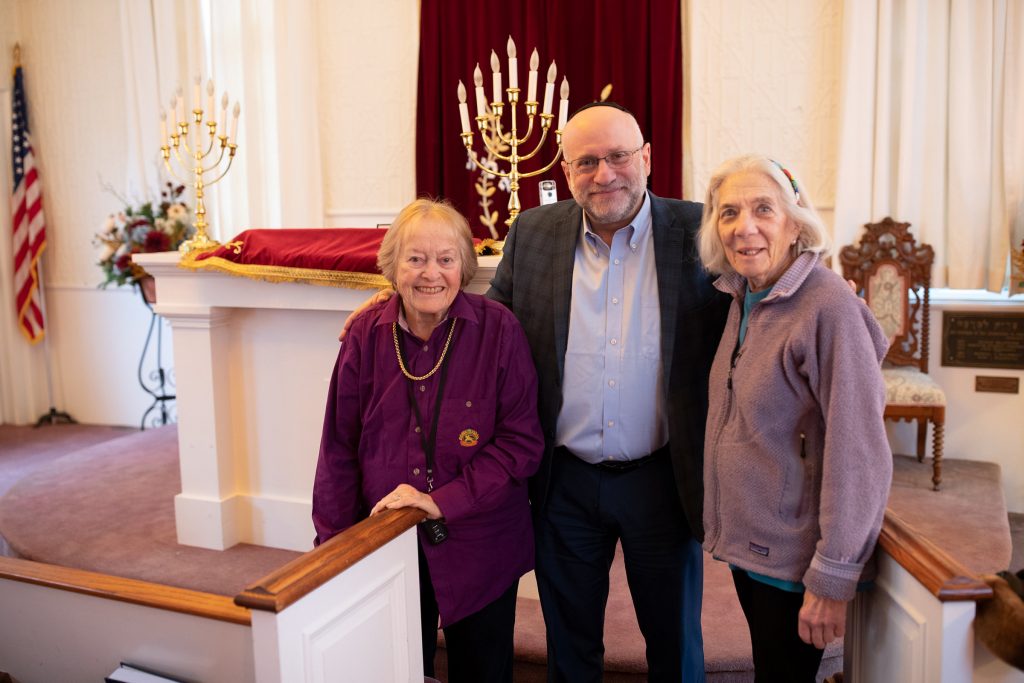 Pioneers of the region

Nearly a dozen men founded the congregation in September 1849, and Louis Millhauser led the first service on the new year at F.G. Waller’s home. As more Jews settled there and the group grew, it bought a burial ground outside town along with other necessities and offered a Hebrew school.

With the help of R.L. Lord, a D&H director, the canal company donated land for the synagogue. When the members ran out of money during construction, Lord gave a personal donation to finish the project on the condition that a steeple be added to the building, legend holding that he or his wife noted, “What is a church without a steeple?” The steeple wasn’t the only church-like feature of the synagogue, which also had pews with kneelers and a choir loft.

Today, Congregation Beth Israel is the oldest synagogue operating in its original building in America, having held its first services at the Court Street temple in September 1856.

Founded as a German congregation rather than an orthodox one, Beth Israel originally conducted business in German, and women were allowed to sit with the men for worship, unlike in orthodox communities, Kleinman noted. The congregation later joined the Jewish Reform movement.

Floods in 1936 and 1942 damaged the building, with the latter destroying the stained glass windows and the original Torahs, pews and altar.

When Beth Israel marked its centennial a few years later in 1949, The Scranton Times reported it also was “the smallest synagogue in the world” — a distinction a 1964 newspaper report said came from Robert Ripley in his “Believe It or Not” publication.

Today, the synagogue mixes the past and present, with a few original pews in the choir loft and lamps donned with Tiffany glass shades. Kleinman pointed out where the gas lights used to be turned on and off on the chandelier, and a keen eye can spot a seam in the ceiling where the old stove pipe used to be.

Up front, meanwhile, rest two copies of the Torah, one of which is a “Holocaust Torah,” an artifact the Nazis plundered from a European synagogue. Allied troops later recovered the Torahs, which were catalogued and distributed around the world, Kleinman said.

“The scroll is a symbol that the Jews still live and thrive,” he said. 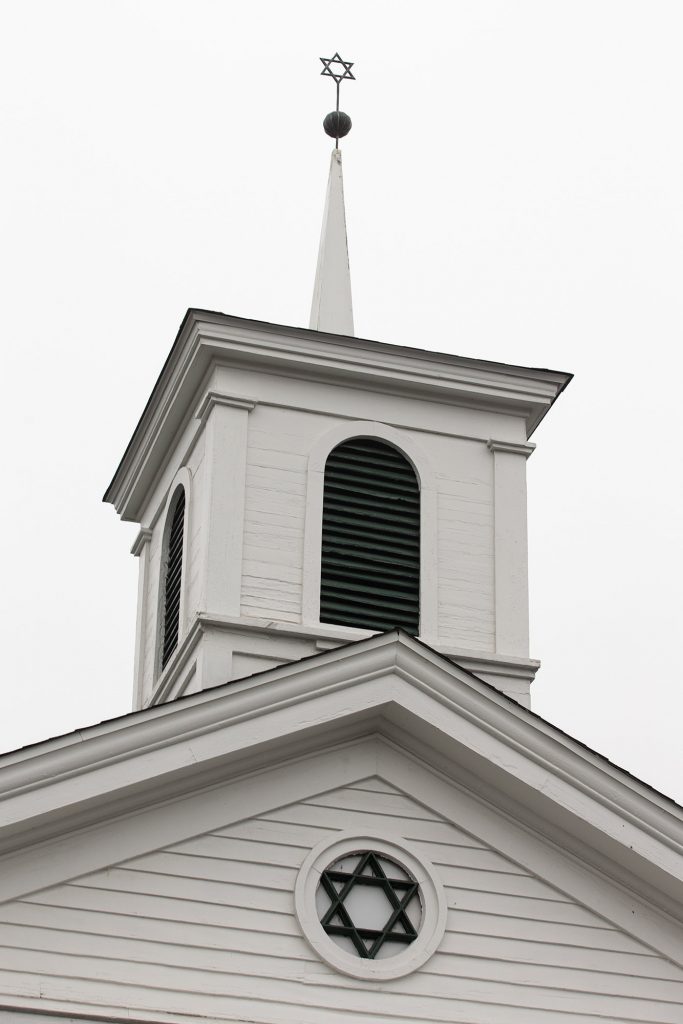 CHRISTOPHER DOLAN / STAFF PHOTOGRAPHER
The steeple at Congregation Beth Israel synagogue in Honesdale is one of the building’s unique features and has a star of David at its top.

“The amazing thing about this congregation is we have members … in California and Arizona and Florida because people (continue to) remain here,” he said. “When somebody dies, whether they live in Rhode Island or wherever, they come back here to be buried because this is their home.”

Over the years, various rabbis, student rabbis and lay leaders guided the congregation. Kleinman, who lives in New York, took over five years ago, succeeding Allan Smith, the rabbi for 44 years. Kleinman comes to the synagogue “in season,” leading Friday night services every other week or once a month, depending on the time of year.

Several members can trace their heritage to the founding, and many are related through various ancestors. Paula Roos moved to Honesdale from Brooklyn, New York, and joined Beth Israel in the early 1950s as she married her husband, Bill, who served as its president. Today, their daughter, Liza Lucy, has that role.

“As long as we have these wonderful people that want to keep it going, we want it to exist for man years,” Roos said. “It certainly is definitely in our hearts and a most unusual place in the world.”

Honesdale resident Martha Sader said growing up in Beth Israel “was really interesting,” and the congregation remained an important part of the community. Jews owned stores along Main Street, and the Katz family in particular was a major local employer, also significantly funding the congregation. Thanks to that long, strong community link, the congregation has never experienced any anti-Semitism or other problems, Kleinman said.

“I think God probably has something to do with it (too),” Sader said with a laugh.

After a gunman killed several people at a Pittsburgh synagogue last year, members of a Honesdale church surrounded the temple at its next service to show the congregation that it was safe and protected, Kleinman said.

“It was an incredible act of interfaith support for the Jewish community that’s been part of the Honesdale community,” he said. 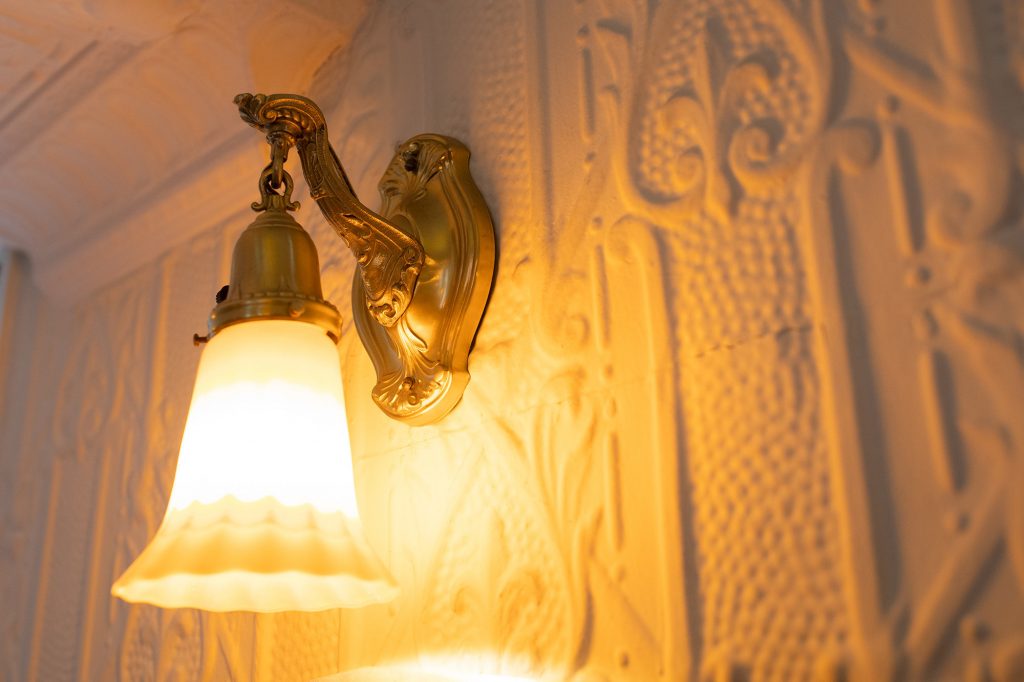 Today, the congregation boasts about 85 families spread across America. Some live year-round in the Honesdale region, Kleinman said, while others are snowbirds or people with second homes in the Lake Region. He said they never worry about how full their services are, though, and are welcoming to visitors.

“We want to know who you are,” Kleinman said. “We want to get to know you. … Farmers, professors, retirees, teachers — you name it, we’ve got it.”

“No one comes in here and is allowed to pretend they’re a stranger,” Sader added.

Beth Israel also has an eye on the future: those who can’t attend services can watch it live streamed online, and the building has a QR code outside that people taking a historical walking tour of Honesdale can scan to learn more about it.

The congregation also plans to have programs to mark its 170th anniversary, such as an open house in the spring and an event to honor choirmaster Ken Green.

Even all these years later, Beth Israel maintains an intimacy and air of traditionalism in everything, Kleinman said, and those enter its walls “walk into history.”

“This isn’t a huge building,” he said. “It isn’t a particularly fancy building, but it’s home.” 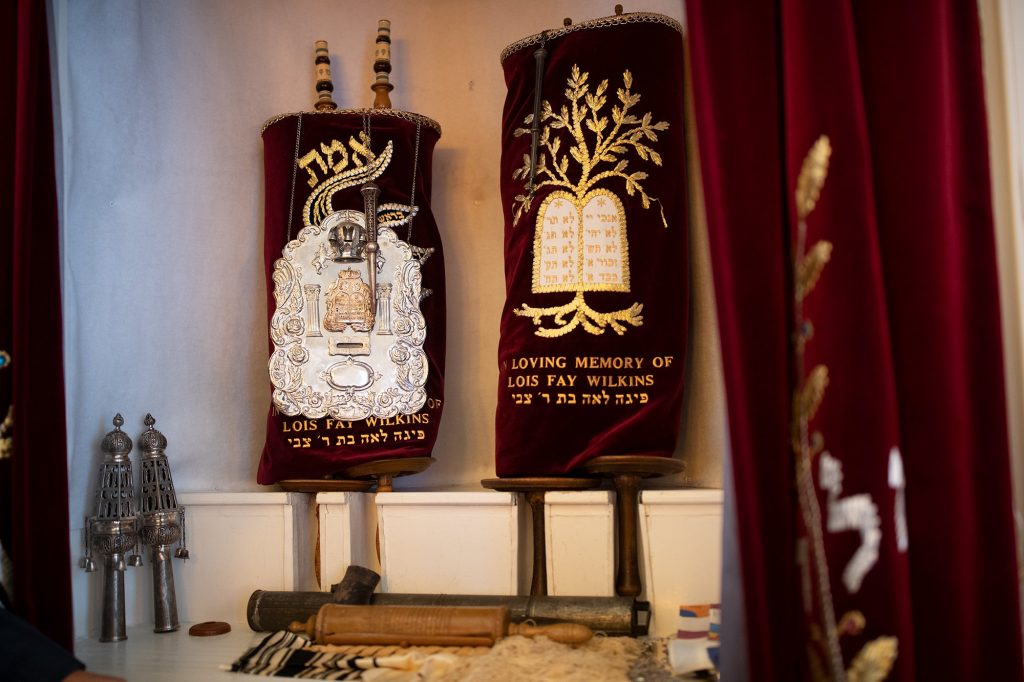 CHRISTOPHER DOLAN / STAFF PHOTOGRAPHER
Congregation Beth Israel’s two Torah scrolls include one recovered in Europe after Nazis seized it during the Holocaust, on the right.