Axel was an unlikely police dog.

Hop Bottom Police Chief Bill Dubiak adopted the German shepherd puppy — a rambunctious runt of the litter — in 2018, to help him cope with life after 10 years in the Marine Corps. It wasn’t until Dubiak saw Axel’s passion for finding things that he started training the black and brown-speckled dog.

Now, the Susquehanna County dog is one of the region’s only bomb-and-firearm-detecting K-9s and, after nearly 500,000 people voted, a semifinalist in the American Humane Hero Dog Awards. The duo works with law enforcement in Lackawanna, Luzerne and Susquehanna counties.

The annual award “searches out and recognizes America’s hero dogs — often ordinary dogs who do extraordinary things, whether it’s saving lives on the battlefield, lending sight or hearing to a human companion, or simply providing the tail-wagging welcome a pet owner relishes at the end of a hard day,” American Humane spokeswoman Savannah Young said in an email.

Axel is one of 21 semifinalists, chosen from a pool of 408 candidates, and one of three dogs vying for the top law enforcement hero dog. Should Axel win, he and six other dogs will move into the final round of voting before appearing on the Hallmark Channel in the fall, when one dog will be selected as the 2020 American Hero Dog. Whether or not Axel wins, Dubiak said he feels like a proud parent.

“When (police departments) are buying these dogs, they’re buying $15,000 dogs,” Dubiak said, explaining he got Axel for about $1,000. “Getting Axel, who was the runt of the litter, and having him come up to be a search and rescue dog, a police dog … you’re proud.”

Dubiak, 35, fell about 45 feet off a cliff in the Horn of Africa in 2012, hurting his back and shoulder and resulting in his leaving the Marine Corps in 2014, a decade earlier than planned. He had trouble sleeping and wasn’t getting out much, so a fellow veteran suggested getting a dog. He met with a man selling German shepherds from the Czech Republic, and the runt biting on toys, rolling around and playing caught his eye. The puppy walked up to him, and that was it.

The two started spending more time in the woods together, and Dubiak noted Axel’s knack for searching. He started training with the local Strike K-9 Search and Rescue group. That led to Dubiak thinking more about using Axel for law enforcement — following his childhood dream of becoming a K-9 handler. 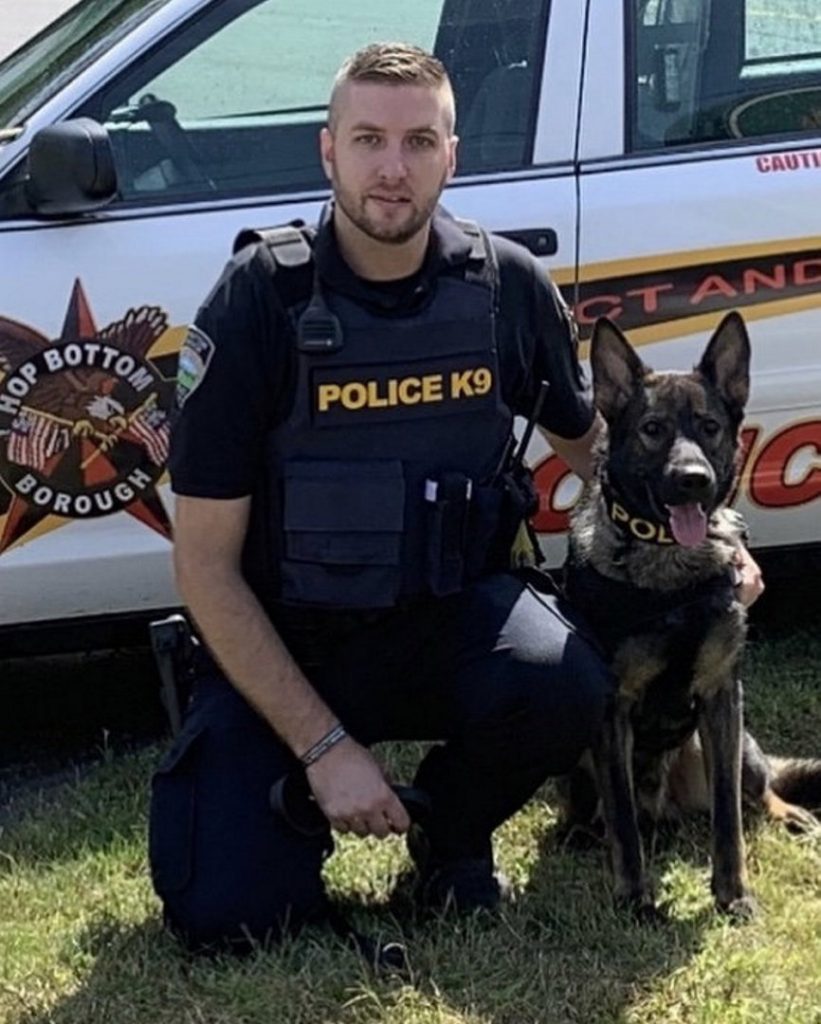 He took Axel to the John “Sonny” Burke Police K-9 Academy in New Jersey. They determined Axel had what it takes, and after hearing Dubiak’s backstory, offered to train Axel for free — something that normally costs $30,000. The two started training in February 2019.

Since then, Axel has trained with live explosives 27 times and continues to impress law enforcement with his ability to find weapons, Dubiak said. On May 23, Axel found a handgun involved in a shooting that was hidden in an attic in Newport Twp. Two days before that, he found two illegally owned shotguns.

“I trust him and he trusts me,” Dubiak said. “He’s the type of dog that would probably give his life for me.”

Although Axel is also trained in bite work, you’d never believe it, his loving handler said.

“He’s super kind,” Dubiak said. “I guess you could say he’s just like a big puppy.”

To vote for Axel, visit herodog

awards.org/vote. Voters can find Axel under the “Law Enforcement” category or by typing in his name. Voting ends July 16.