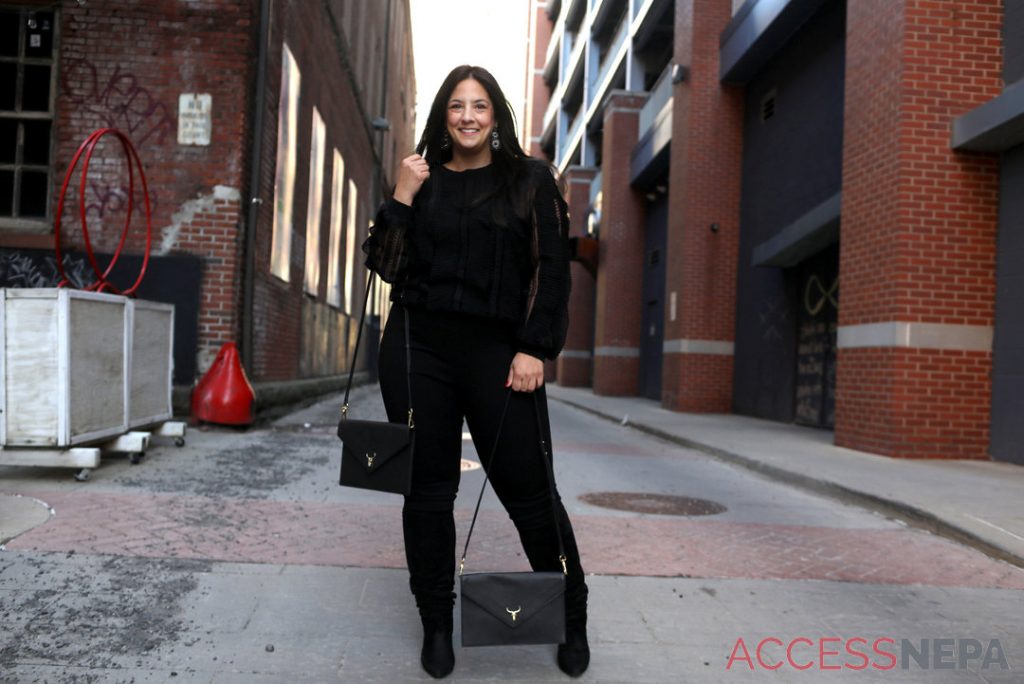 After she switched her plans from pre-med to fashion, Polito set out for New York City at 18 to pursue her dream. She began a career in retail as an assistant buyer and worked her way up the luxury ladder with big-name brands over the next 13 years.

In 2015, Polito’s knack for fashion and trends led her to take a leap of faith to develop her own brand, HYD NYC, which sells handbags, totes and more that give each owner a sense of feeling effortlessly chic with a downtown edge. Then, after making her way in New York, Polito moved back to Northeast Pennsylvania last year, from where she continues to run her company.

“If you would have asked me 10 years ago if I would be moving back, I would have said you’re crazy,” she said with a laugh during a recent phone interview from her home in the city’s Green Ridge section. “New York City is a city you love to love and love to hate (sometimes). Once you’re in your career there, you never think, ‘Can I actually do what I love and live somewhere else?’ because, especially in the fashion industry, you feel kind of stuck because New York is (huge) for fashion. … COVID gave me a way to get out of the city and showed me I can still pursue what I love.”

Fashion was always a constant in Polito’s life. At Dunmore High School, she was known for her style (even voted best dressed by her classmates) and loved putting together outfits. She initially attended University of Scranton for biology/pre-med and also started working for United Colors of Benetton downtown. Her part-time gig offered her experiences from traveling on buying trips to meeting different kinds of people. When she started to look at her life and future, it was clear that fashion was where she most saw herself.

“I loved what I was doing,” Polito said. “When the questions come up, ‘Where do you see yourself in 10 years? What makes you happy?,’ I saw (myself) working in fashion, and I knew I needed to make a change.”

She transferred to Fashion Institute of Technology in New York City, which felt like a better fit. After graduation, she was tapped by Dylan Lauren, fashion designer Ralph Lauren’s daughter, to be an assistant buyer for the fashion heiress’ candy store, Dylan’s Candy Bar. The boutique candy shop, which eventually became a chain and candy supplier, is a colorful, fantastical place where fashion, art and pop culture meet confections. It also was featured in films such as “Hitch,” starring Will Smith, and television shows including “Gossip Girl,” “Project Runway” and “The Unbreakable Kimmy Schmidt.” Working with Dylan’s let Polito use her love of fashion and aesthetic while learning the ropes of the retail industry.

After that, Polito moved back home for a bit and worked as retail manager for Lackawanna County, implementing an inventory management system at county stops including the Electric City Trolley Museum and Lackawanna County Visitors Center. She then relocated to Miami, where she began working on the corporate side of fashion at Saks Fifth Avenue in Bal Harbour. Polito missed getting her hands on merchandise, however, and switched back to a buyer role for Saks, first in intimate apparel and then designer men’s shoes.

After nine years with Saks, Lauren asked Polito if she’d like to come back, this time as a senior buyer for Dylan’s. Polito jumped at the opportunity, which let her travel to England and expand into several new locations.

Working in retail also led Polito to encounters with big names. She worked with Chris Pratt at Ronald McDonald House for Dylan’s as well as met fashion designer Oscar de la Renta at Saks. Also when she was buying for Saks, shoe designer Giuseppe Zanotti created an exclusive collection for the brand.

“That was pretty epic, sitting at a table with him while he was sketching the collection,” Polito said of the designer, whose clients have included Nicki Minaj, Lady Gaga, Rihanna and Kanye West.

In 2015, during a trip to Calistoga in Napa Valley, California, she was having a hard time finding the right crossbody bag to hold all of her belongings and her phone so she could keep a free hand for holding a wine glass. Polito knew she couldn’t be the only one struggling with fashionable bags being too small or larger bags being too casual for the setting. She felt she needed to design her own bag that could work for any person, for any setting, that was large enough to hold everything but also still transition from a day bag to an evening one.

Polito worked closely with Lauren while developing Dylan’s, and Polito also had years of experience working in both retail and fashion. She took design classes at FIT but had never considered herself a designer, per se. To design and create her own handbag, not to mention a whole brand, was a risk she weighed taking.

While her parents, Michelina and Nicholas Polito, have offered their daughter unwavering support since she was a child, entrepreneurism also is in her blood. Polito’s uncle and godfather, Joseph Macciocco, owns Villa Maria in Dunmore. Her mom, meanwhile, owned and operated Micki’s Hair Salon in downtown Scranton, one of the first full-service salons in the area, offering everything from cuts and color to tanning and manicures.

Michelina Polito, who worked for 37 years, is her daughter’s biggest role model. She showed both Polito and her brother, Nick, the passion, hard work and grit it takes to own a successful business. Though she ran her salon on top of working there full-time, Polito said, her mother never missed a beat. From sporting events to school activities, her mom always was there for her kids.

“She was an original boss babe,” Polito said.

With a business-minded family and her parents’ constant support, Polito never doubted her talent and experience, because she witnessed it firsthand while growing up.

“It was a moment where I asked myself, ‘Can I do this on my own?’” she said, adding she still maintained a full-time job while doing so. “It’s definitely nerve-wracking to strike out on your own, but it was something I felt drawn to. I just decided to bet on myself.”

Polito started to sketch handbag designs and took them to several factories in New York City. Finally, she found the right fit to create the bag. She was there every step of the way, choosing materials and looking over every inch of the bag until it was perfect. Polito also worked with a friend on the graphic design for her brand, HYD NYC. In 2018, she launched her first collection.

“I was so excited and proud,” she said. “It was nice to see all my friends and family with bags but also to see people who I don’t know loving my handbags. It was amazing.”

Since debuting, HYD NYC has expanded into some apparel, candles and accessories, with multi-purpose everyday bags at its center. The Classic Skull Collection, launched this past winter with a run at New Laundry, 127 N. Washington Ave., Scranton, is made with the same super-soft leather HYD NYC is known for, but it’s also defined by its emblematic skull hardware, which has become a hallmark of the brand, Polito said.

Polito felt it was a sweet way to tie HYD NYC into her roots in NEPA, which she’s also rediscovering as home.

Last year, living in New York began to take a toll on her. As the coronavirus pandemic began, it seemed like a sign that it was the best time to head back to her hometown. She couch surfed through her families’ homes for a while before finding her own place in Green Ridge, only about five minutes from her parents’ house.

Polito hasn’t slowed down in business, either. She’s kept busy with HYD NYC, including making custom pieces and collaborating with local artist JFo aka Jennifer Forgione, which is in its concept stages. She also plans to launch Electric City Sweets this spring. Offering gifts, chocolates and gummy candies, it’s a way to get back to her roots in candy, which Polito said will immerse candy-lovers in an indulgence of sights, smells and tastes. Electric City Sweets will debut with 10 candy bars that range from favorites such as dark and milk chocolate to decadent flavors like salted caramel brownie and red velvet cake.

In a lot of ways, Polito is going back to her beginnings with all of the knowledge, skills and tenacity she’s learned along the way. It feels good to be back, she said.

“It’s funny and a little bit surreal to come back to where it all began,” she added.