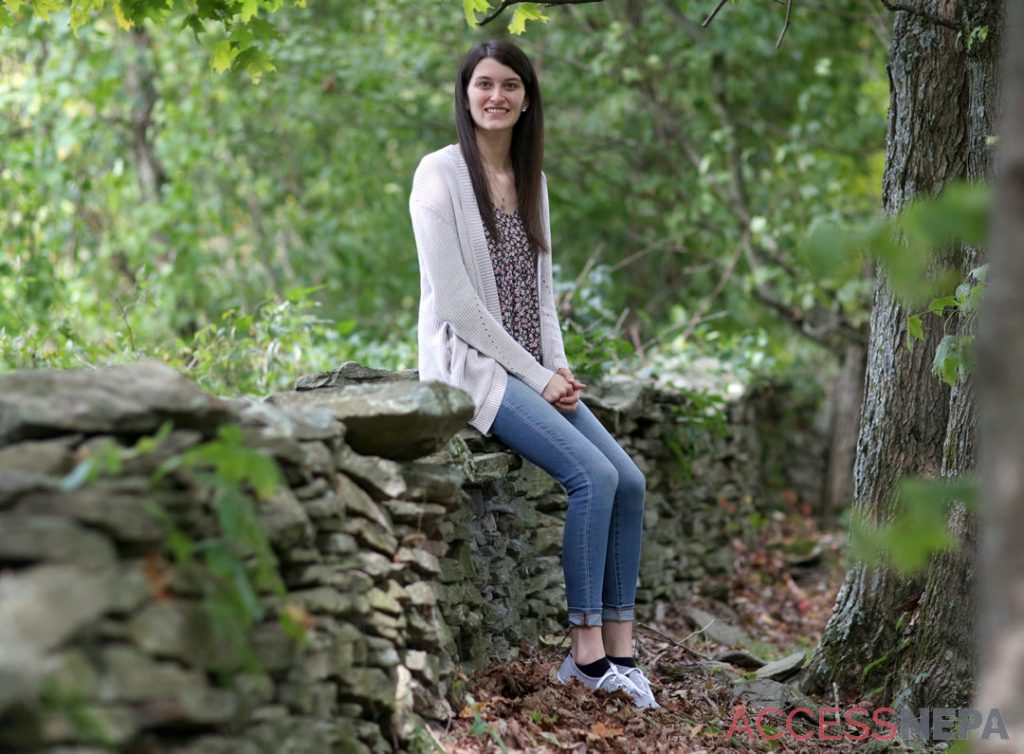 Christine Anzelmi wanted to give her time to others, and she didn’t let the pandemic stop her.

At the start of last semester, the Scott Twp. resident and University of Scranton student began volunteering at Lackawanna Health & Rehabilitation Center, Peckville, where she spent time chatting with and listening to residents, many of whom are elderly. It proved to be a positive experience for a young woman studying biology/pre-med who hopes to become a doctor one day.

“I would just go and sit with residents, and I know a lot of them didn’t have any family members that (would) come and visit,” recalled Anzelmi, now a college senior.

About a month and a half into her time at the center, though, the coronavirus pandemic swept into Northeast Pennsylvania, and Anzelmi was no longer allowed to volunteer at the health care facility as it took precautions to prevent the virus from spreading there. Anzelmi decided to take a different approach to giving back, one that left folks at the center in awe. 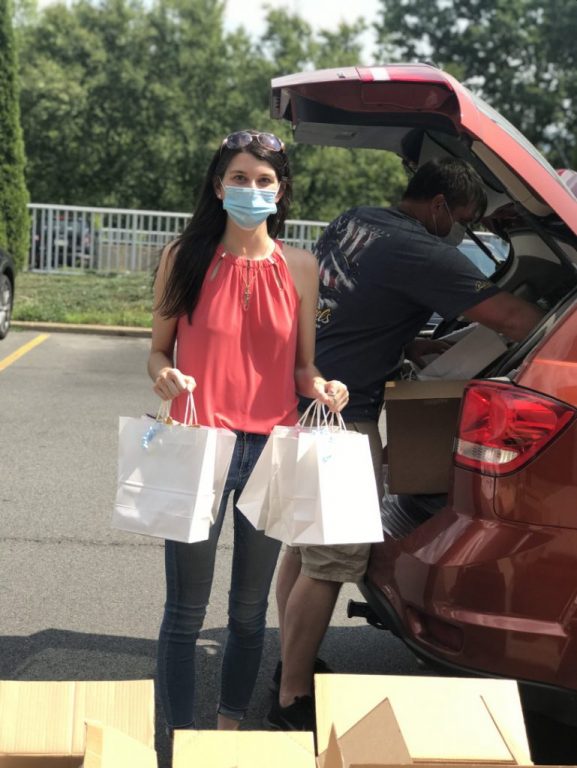 SUBMITTED PHOTO
Christine Anzelmi unloads some of the gift bags she put together for residents of Lackawanna Health & Rehabilitation Center, Peckville.

A 2016 graduate of Lakeland Junior-Senior High School, Anzelmi grew up volunteering “here and there” with her parish, St. John Vianney in Scott Twp., and decided to give back to the community last school year in way that would coincide with her studies.

“I wanted something more on the scale of not (a) medical school but something that I could really get involved with in my field, and I thought a nursing home would be great,” she said.

Tana B-Snyder, volunteer coordinator and activity aide at the center, said young volunteers who come there often do so to fulfill volunteer hours needed for school or church, and many end up helping transport things. Anzelmi, though, wanted to do more.

“She actually wanted to spend time with the residents, which was really awesome,” B-Snyder said. “I would give her a list of different ones that needed visitors, and it didn’t matter the degree of their medial condition — she was comfortable with dealing with any situation, which was really nice.”

Anzelmi stopped by the center any time she had a break between classes, staying for about an hour. A handful of residents would always look forward to her coming, she said, and B-Snyder noticed the difference Anzelmi made in the residents’ lives in just a few short weeks there.

“It certainly brightened up their day, a lot of them, just the fact first of all that you have this really beautiful girl who comes in and is just so pleasant and down to earth and just wanted to talk to them about their day,” B-Snyder said.

“Mostly, I would just sit with them and talk,” said Anzelmi, adding that the center also had decks of cards and other activities with which to engage residents. “You could tell that a lot of them just wanted to talk to somebody. … That’s why I felt so bad when everything closed.” 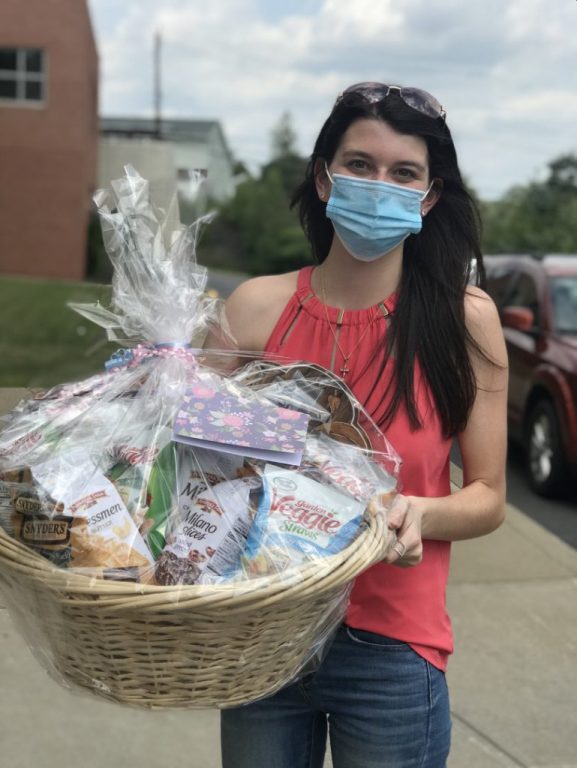 When the pandemic hit in March and Anzelmi had to stop volunteering out of safety concerns for the residents, she continued to reach out to B-Snyder to check on the people she’d gotten to know there.

“I give my personal number out to all of my volunteers, so she would send me a text here and there,” B-Snyder recalled. “I couldn’t go into details because of HIPAA, but I just continued to let her know that we were all healthy.”

Still, Anzelmi wanted to know if she could do more.

“I was driving home with my mom, and she was like, ‘Maybe we could give them something,’” she said. “And I know that Tana had suggested doing a letter for a few of (the residents). … I wanted them all to get something, (but I didn’t) even know how I would pick one floor but not the other floors. My mom and I were like, ‘Let’s just make gift bags for all of them.’”

B-Snyder pointed out that a bag for every resident on each of the center’s four floors would mean a lot of supplies, but Anzelmi decided to try anyway. B-Snyder gave Anzelmi suggestions for items residents could use, from personal care items to notepads to activities, and Anzelmi turned to the community for help. Her family, friends, parish and others stepped up.

When recording Mass to broadcast to the public during the pandemic, her parish priest announced that Anzelmi planned to collect donations outside the church for the nursing home’s residents. People then could just drive up and drop off items for the gift bags.

“We got a lot of little things like notepads. We got pens, pencils,” Anzelmi said. “We got a lot of decks of cards, stuffed animals, a lot of word-find books, adult coloring books, shower caps.”

The amount of donations from her fellow parishioners amazed her. The church also gifted money toward five year-long newspaper subscriptions.

“I knew from the start that they were going to be super helpful because they’re always very on board with donating … and helping out,” Anzelmi said of her church. “But I was definitely surprised at how much we got, even with everything going on.” 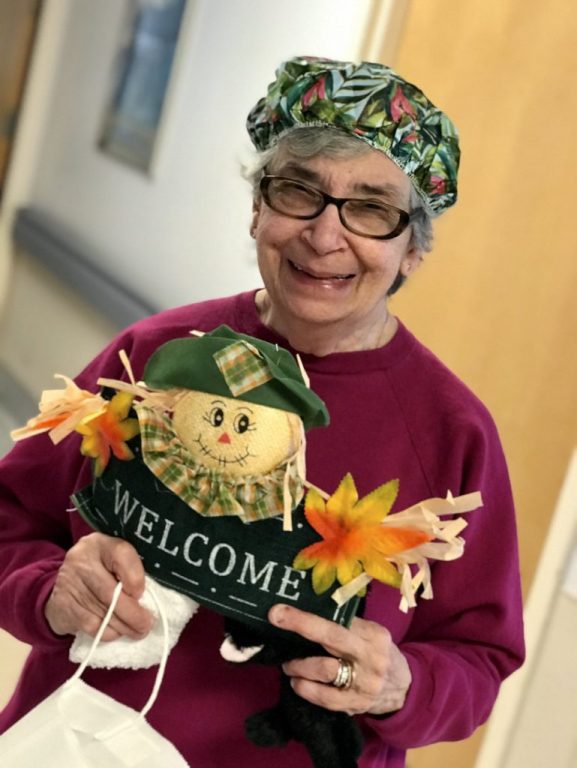 SUBMITTED PHOTO
A resident of Lackawanna Health & Rehabilitation Center shows off one of the items she received in a gift bag donation coordinated by Scott Twp. resident and University of Scranton student Christine Anzelmi.

The gift bags came during a difficult time for nursing home residents and their families, many of whom must stay separated to maintain health and safety during the pandemic. Some residents can video chat with their loved ones, B-Snyder said, but “from our aspect as workers, it’s hard to watch families be separated like this.”

So when Anzelmi came with around 200 gift bags — each filled with three or four items, which also included fall decorations for residents’ rooms, puzzles and crayons — it was “absolutely wonderful,” B-Snyder said. The items can help keep residents’ minds sharp and give them a way to put their creativity to use, she added.

“I don’t think that they were expecting me to show up with three carloads of gifts,” said Anzelmi, who noted the project took about three weeks to complete.

Anzelmi and helpers unloaded the bags at the center around the start of the fall semester. Residents of the center’s Alzeheimer’s disease unit, which overlooks the front parking lot, watched from the windows as they unloaded everything and wondered who the bags were for, B-Snyder said.

The gifts surprised a lot of the residents, Anzelmi said.

“I was super excited. I know that it’s a crazy time for everybody, and I can only imagine how much more hectic it is in the nursing home,” she said. “Many of them didn’t see people before COVID, and then when everything hit, I’m sure it was worse.”

Some residents looked in awe over getting a gift bag, while others who don’t have much family interaction began to cry “at the gesture of being thought of,” said B-Snyder, who described the delivery as “Christmas in August.”

“They just started tearing up like, ‘Who gave me this?’” B-Snyder said.

A card in each bag gave credit for the project to the community — not to Anzelmi, B-Snyder pointed out.

“I told (the residents), ‘This is one of our volunteers. She thinks so much of you guys that she wanted to make sure there was something that would cheer up your day. And she got her churches involved, and they just went to town and did this wonderful, nice thing for you guys,’” B-Snyder said.

B-Snyder noted she has never met anyone “so thoughtful of people who are sort of stuck” in the center as Anzelmi. It’s just nice to know that there is someone on the outside thinking about this community at this unprecedented time, B-Snyder said.

Anzelmi said she and her helpers have thought about doing another gift bag donation, although with her college career coming to an end this semester and the prospect of medical school on the horizon, things are a bit hectic at the moment. Still, she thought ahead during the initial giveaway, including some extra gift bags for new people coming into the center.

And the residents have paid forward Anzelmi’s generosity. Those who didn’t need shower caps, for instance, found others who could use them and passed them on, B-Snyder said.