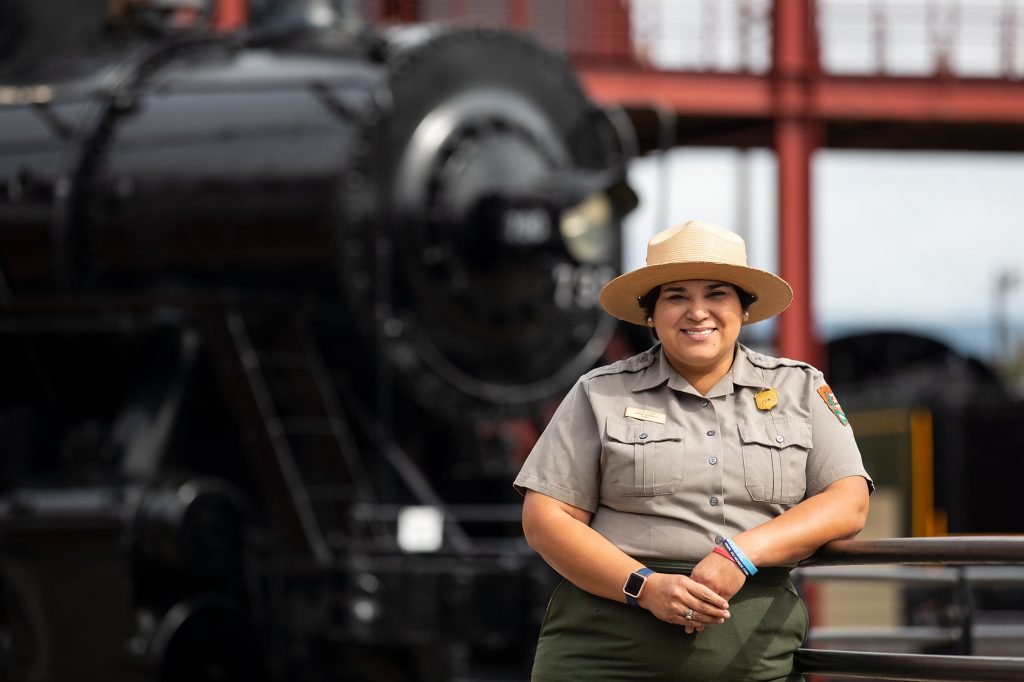 The new park ranger noticed when she began in May that Steamtown had no Spanish translator and all its educational literature and signs were exclusively English. A growing number of non-English-speaking guests visit Steamtown, which has become an international draw, said the 32-year-old California native who worked at the Statue of Liberty National Monument before coming to Scranton.

Early on in her new job, Blum, who speaks Spanish and French and is the daughter of Mexican immigrants, translated four booklets for the Junior Ranger program into Spanish. This winter she plans to translate them into French.

Most destinations within the National Park Service have free Junior Ranger programs. Completing Steamtown’s usually takes a few hours, and it educates guests of all ages on the history of railroading. Everyone who finishes it receives a Junior Ranger badge.

She remembered a weeklong stretch of British visitors who were staying in Philadelphia but made the 125-mile trek to Scranton. Baffled, she asked why.

“Oh, it’s because you have a Big Boy,” she recalled being told.

That’s the massive Union Pacific steam engine in front of the park entrance. There are only seven on public display in the United States. The closest one to Scranton is in Green Bay, Wisconsin.

“Now I see why people are drawn here,” she said excitedly. “The Big Boy’s unique. It’s the only one on the East Coast.”

Another time, a Canadian visitor accidentally let a “merci” slip out. She caught herself, then tried to say the English version, “thank you.”

Blum surprised her with a French “you’re welcome.”

When the visitor realized she had a French speaker in front of her, it triggered a flood of questions in French that likely would have never been asked because of a language barrier.

When another family overheard her speaking in Spanish to a family from the Bronx after a train ride tour on Memorial Day, they rushed over. Like the Canadian woman, they had many questions about railroading and the park.

That’s when it dawned on Blum to take on the important project of translating the Junior Ranger program booklets.

Anecdotally, roughly 20% of park rangers nationwide speak more than one language, according to National Park Service spokeswoman Kathy Kupper. The park service does not track the number of rangers who speak other languages, but Kupper said at least 10% of employees served in the Peace Corps, and other employees, who did not serve, speak other languages.

At least in Bill Fischer’s three years at Steamtown, the historic site never had a multilingual park ranger. Blum’s fluency in Spanish and French played a part in hiring her, said Fischer, who is chief of visitor services and resource management.

“It’s something that the NPS takes seriously in trying to meet visitors’ needs,” he said, adding that Steamtown has seen an uptick in Latino visitors, and is currently strengthening its outreach to Hispanic communities in Hazleton.

The push follows a recent assessment by the National Center on Accessibility, which helped write a long list of goals Steamtown should hit in making the place more accommodating for people who speak other languages and with disabilities.

For example, the park is making sure all of its benches are the appropriate height per the Americans with Disabilities Act.

“We need to focus our energy where we can … we need to be prudent,” he said. “We have a list of things big and small, and we’re working to get them taken care of.”

Part of that means translating literature when it’s appropriate, and Spanish and French are among the most prevalent non-English languages that come through the park.

Blum never meant to settle down on the East Coast. However, she graduated with a master’s degree in European history at the height of the Great Recession. Work for newly minted historians was rare back then.

She found a volunteer position at the Museum of Man in San Diego, but that was it.

“That’s not good when you’re a recent college grad and you have your student loans knocking at your door saying, ‘Hey, remember us?’ ” she said, chuckling.

Her alma mater, St. John’s University in Queens, New York, offered her work in its residence life department as a residential director — not in her field, but a job nonetheless. As part of the deal, she had to return to school. So, she got another master’s degree, this time in public history.

It was then that she interned at Ellis Island National Museum of Immigration and entered the National Park Service world.

After school, she took a full-time job at the Statue of Liberty National Monument for a four-year term, which ended last year.

Steamtown’s not exactly ideal for Blum because her husband is a lawyer in New York City. She only sees him on weekends.

For now, she’s committed to making sure everyone who visits Steamtown can experience as much as they want, no matter their native language, starting with the Junior Rangers.

“I love this program,” she said, touting her own portfolio of Junior Ranger badges and visits to national sites across the country. “I’ve been to 85 parks.”