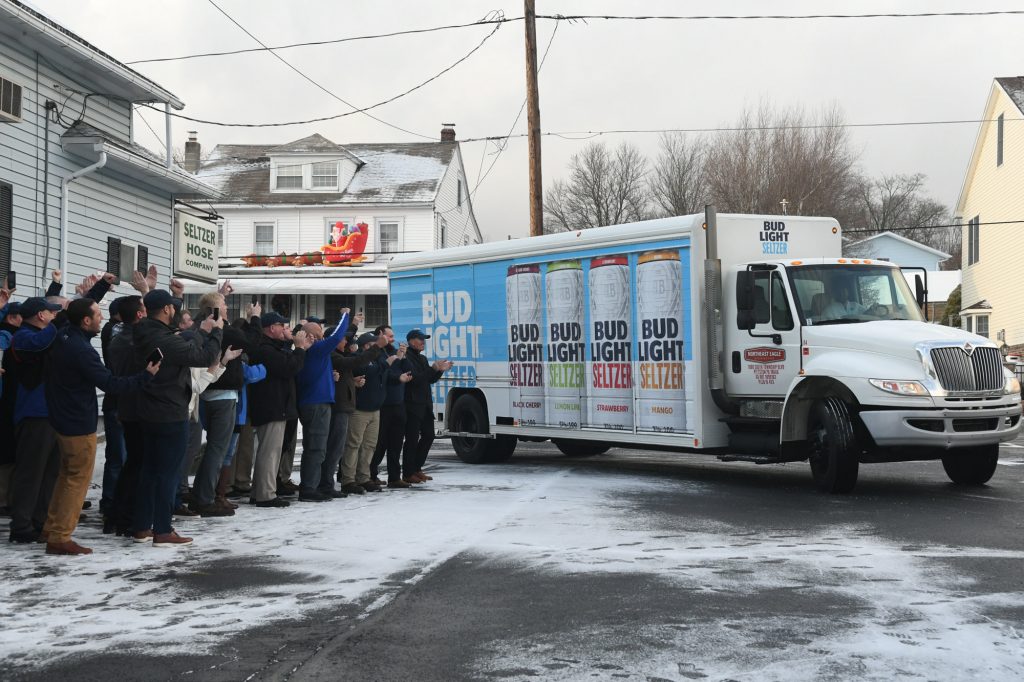 Spotlight on Village of Seltzer has advantages

The notoriety started when someone with Anheuser-Busch, the parent company of Bud Light Seltzer, decided to do a Google search for Seltzer and, lo and behold, found the small Schuylkill County village.

Jenn Pugh, company treasurer and bar manager, remembers the day when, sitting at the company bar, a call came from Northeast Eagle Distributors in Pittston, an Anheuser-Busch distributor asking to rent the fire company hall for a company venue.

Little did Pugh or other company members realize that the rental was actually for a kickoff event by Anheuser-Busch to announce the nationwide kickoff of Bud Light Seltzer.

As time quickly passed David George, a company member and a Norwegian Township supervisor, said no one was allowed to mention the soon-to-be announcement of Bud Light Seltzer. 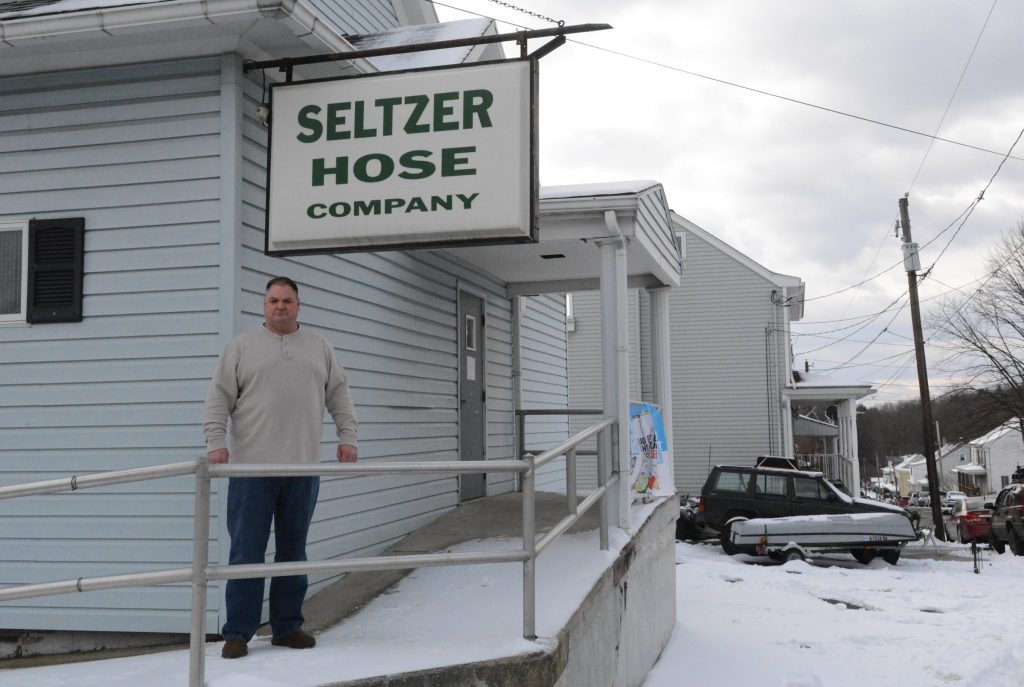 George said that between Dec. 18 and Jan. 13, Seltzer Hose was the only place in the United States that Bud Light Seltzer was available for purchase.

When the formal television announcement was made and featured the village, the excitement started.

The Seltzer Hose Company has now earned the distinction of being the “Original Home of Bud Light Seltzer.”

Using the village’s name and also highlighting the hose company has its advantages.

Bud Light Seltzer donated $15,000 to the Seltzer Hose Company Volunteer Fireman’s Relief Association to be used for the fire truck and also for firefighter safety.

Frank Melenchick, company president, said that although the celebrity status and monetary donation came as a surprise, it is greatly appreciated.

“This highlights small-town America, this is what make’s our country great,” he said about a worldwide company selecting the village and the hose company. 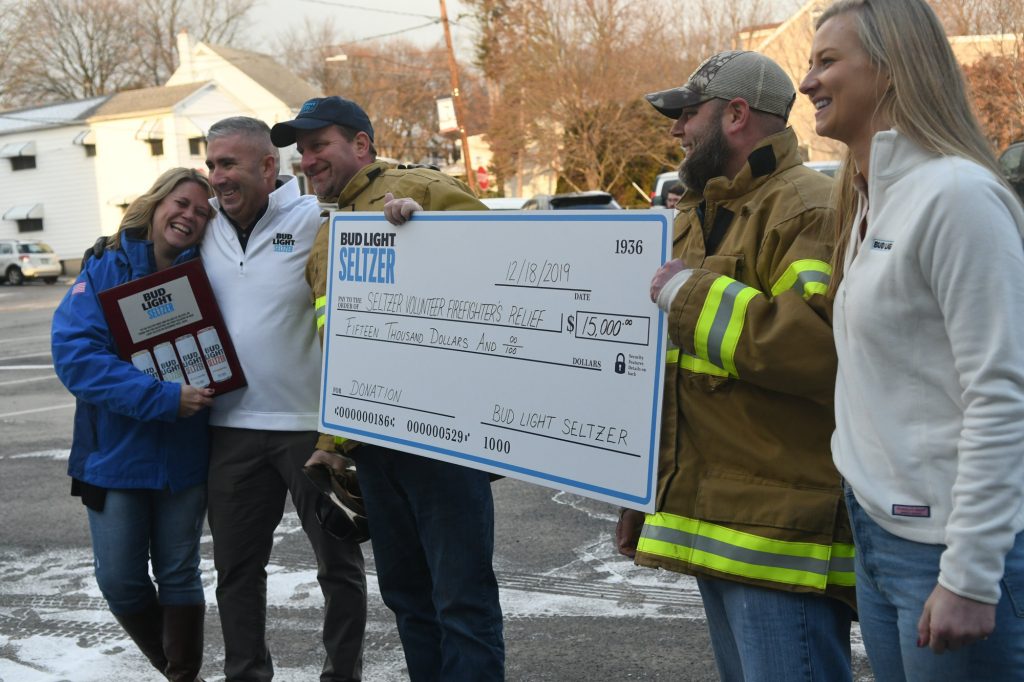 Not only has the announcement brought the fire company’s name into the public’s eye, it also brought in new members.

Bill Holley, a firefighter and company trustee, said that since the announcement, 32 people have submitted membership applications and will be sworn in as members this month.

Dubbing himself the “unofficial spokesperson” for Bud Light Seltzer, Holley said the distinction of the village in the national advertisements is a win-win for everyone.

‘This is great for the community, this is nothing but positive for the village of Seltzer and for Norwegian Township,” George said. “On behalf of all the supervisors, we’re proud of our volunteer fire companies.” 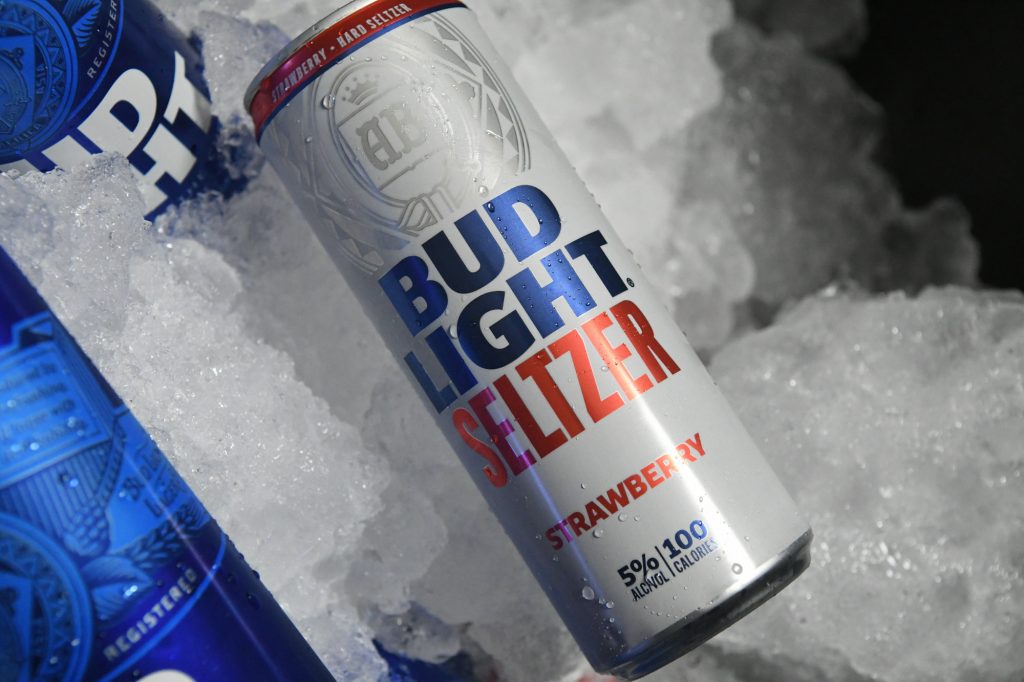 JACQUELINE DORMER / STAFF PHOTO
Bud Light Seltzer keeps cool during a private reception at the Seltzer Hose Company in Seltzer, Schuylkill County, on Dec. 18, 2019. The delivery by Northeast Eagle Distributors of Pittston was the first of the new Bud Light Seltzer product.

Although Seltzer Hose is highlighted, George also stressed the dedication and service of the township’s other fire company — The Citizens Hose Co. in Mar Lin.

With the Super Bowl to be televised next month, company members and friends hope Anheuser-Busch will feature a commercial for Bud Light Seltzer and their village.

If not, the commercial was broadcast on Sunday during the Kansas City Chiefs-Tennessee Titans football playoff game.

“Who knows? Maybe this time next month over 1 million people will know we exist,” Bill Holley said, referring to the Super Bowl.