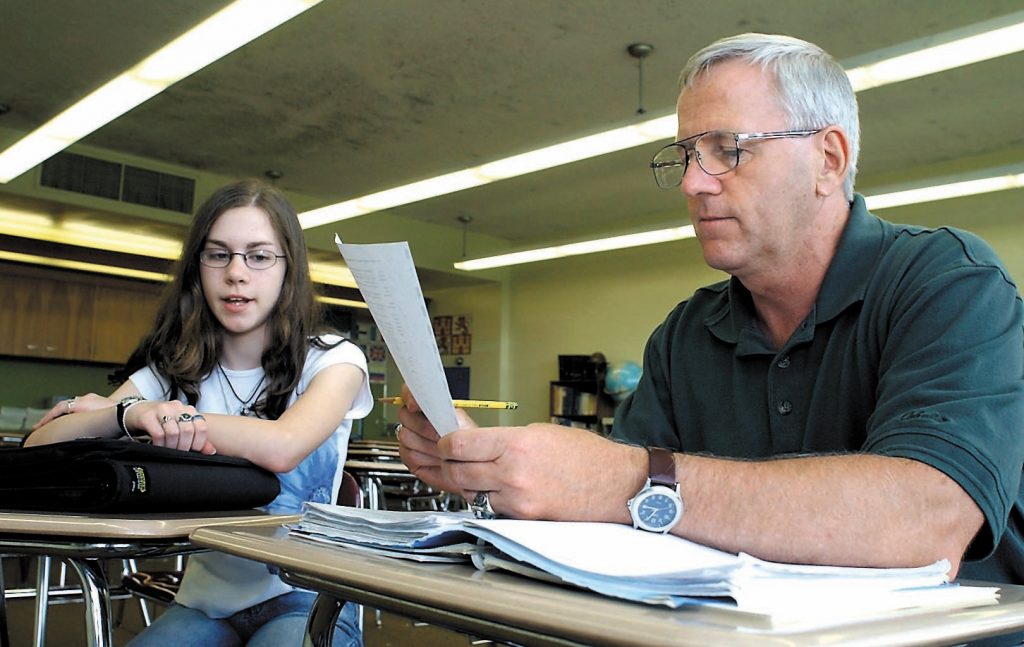 L-O-V-E may not have been on the word list, but for one regional spelling bee champion and his future wife, their connection at the local competition eventually led to M-A-T-R-I-M-O-N-Y.

As The Republican-Herald marks the 65th annual Regional Spelling Bee this Saturday, winning spellers and their coaches shared their memories of the competition. Some champions have become doctors, lawyers, professors and corporate leaders.

Many of them referred to their word obsession as a bit “nerdy,” but were grateful for the experience that fostered friendships and a disciplined work ethic they carried into adulthood.

Mark and Jessie Travor, of Cooperstown, New York, married July 8, 2017. Mark Travor won the regional spelling bee twice, in 2007 and 2008, the first year that a prior regional bee winner was permitted to participate. Jessie was also a spelling bee contestant. The pair met when Mark was in sixth grade and Jessie (Setlock) in fifth grade on the Blue Mountain team.

“Early on, I remembered some of the younger students were being introduced. She was quiet at the time. Over the years, we became good friends. I knew she was special but didn’t know it would lead to what it did,” he said.

Mark, a 2012 Blue Mountain High School graduate, earned a bachelor’s degree in biology from Penn State University’s main campus in 2016. He will graduate in May with his doctorate in ophthalmology from Columbia University and will conduct his internship and residency at Dartmouth. Jessie is a labor and delivery nurse at Bassett Medical Center in Cooperstown.

“The spelling bee was a big part of who I was as a middle school student and it was an awesome experience … It’s been quite an exciting journey,” he said. “The study techniques, the focus and the drive are very relevant.”

Jessie’s older sister, Emily Setlock, was the regional winner in 2001. Travor said he finds the bee “fun to watch” and has returned to the area to see others compete.

Jennifer Yuengling, vice president of operations for America’s oldest brewery, D.G. Yuengling & Son Inc., was the 1985 regional winner from Pottsville Area. Her son, Derrick, competed in the regional bee when he was in fifth and sixth grade.

“Competition in the Regional Spelling Bee as a middle-school aged student not only helped me establish a foundation for proper study habits, but I also had the opportunity to gain self-confidence while on stage,” Yuengling said in an email.

“I represented Pottsville D.H.H. Lengel Middle School in 1985. Mr. (Charles) Underwood was a long-tenured English teacher and spelling bee coach at the time. One of his training techniques was for his team of spellers to not just memorize words, but learn about word roots and origins.”

“What I remember most about the National Spelling Bee in D.C. was the sense of sportsmanship amongst the spellers, even though there was intense competition,” Yuengling said.

Shane McGinley Clauser was the 1998 winner from Pottsville.

“It was a formative experience at a young age. I had the opportunity to work under the tutelage of Mr. (Charles) Underwood. It instilled a love of letters and the English language,” said McGinley Clauser, now of Mexico City, Mexico. He graduated from Pottsville Area High School in 2003, received a bachelor’s degree in political science and English from Lafayette College and a Ph.D. in English from Northwestern University. He had worked on Wall Street previously, and today works remotely as a finance and marketing director for Floor Innovations Inc., of Chicago.

He said his parents, Thomas Clauser and Barbara McGinley; his English teacher, Sherrill Silberling; his coach, Charles Underwood; and Kay Haffey, the former regional spelling bee coordinator who accompanied champions to Washington, D.C., were all so encouraging.

“Kay Haffey was really a kind woman and I remember going with my family at 12 years old. It was such a special time to connect with young folks around the country,” McGinley Clauser said, noting a contestant from Kingston, Jamaica, won the national bee when he competed in 1998.

Alanna Durkin was the 2004 regional champion from Pottsville. A 2008 of Pottsville Area, she attained a B.A. in biology in 2012 from Cornell University and her Ph.D. in biology from Temple University in 2018.

Today, she resides in Philadelphia and works as a science communicator and educator.

“I’m an adjunct professor at Montgomery County Community College teaching general biology. I also sometimes return to Temple University as an adjunct as well, and I work weekends at the Adventure Aquarium telling guests cool things about sharks and other marine animals since marine biology was my main area of study,” she said.

“I had a blast on the trip to D.C.! I don’t have a lot of specific memories from that many years ago, but I really enjoyed meeting spellers from other schools. They were all fun, nerdy people who were outgoing and supportive of one another. After the bee hosted a board game event on the first night of the week, you’d find spellers gathered in all corners of the hotel playing Risk and other games any time of the day. We also went to the hotel’s karaoke night and somehow a bunch of pre-teens took over the hotel bar singing and playing board games,” she said.

Durkin said she read a lot and learned the etymology of words. Paying attention to the language of origin and common word roots was the best way to figure out an unfamiliar word, she said.

“I still use etymology all the time when teaching and learning scientific terminology. The vocabulary of biology makes so much more sense when you can break down the terms into their Latin and Greek roots,” she said. 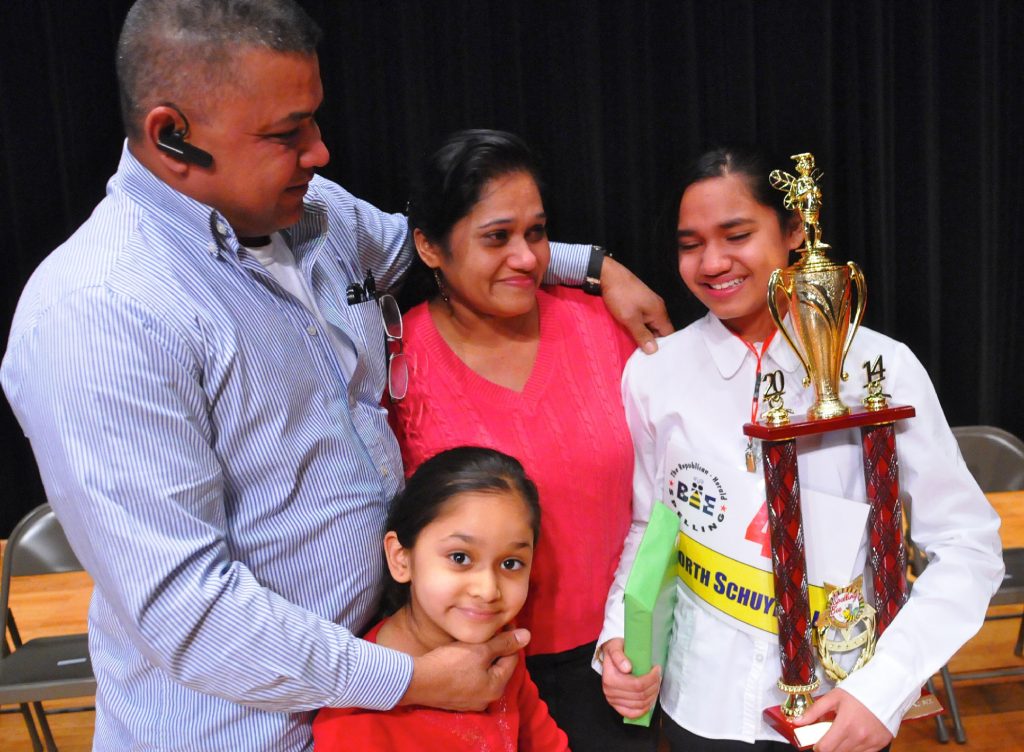 STAFF PHOTO
Devina Singh, 13, North Schuylkill, celebrates with her family after winning the 2014 Regional Spelling Bee at Blue Mountain High School. With her are parents Steve and Daisy Singh, and her sister, Ravena.

“I support them in what they want to be involved in and this is something that they all liked,” Steve Singh said, crediting his wife for her tutoring. Devina is a sophomore pre-med student at West Chester University and certified chemistry tutor. Devindra is a student at Shippensburg University majoring in biochemistry with a minor in forensics. Both are accomplished musicians. They will return to the county Saturday to cheer on their younger sister.

Parochial and public school students in fifth through eighth grade compete regionally, and the regional winner vies nationally. The first regional champion was Peter Fatula, of the Frackville School District in 1956. Over the years, Pottsville Area produced 18 regional champions and Blue Mountain, 10.

Charles Underwood coached the Pottsville team from 1973 until his retirement in 2004, and had 15 regional winners. Two Pottsville students, Arthur Hodge in 1989 and Yuni Kim in 1993, both placed third nationally. All star spellers are ardent readers, he observed.

“I worked hard with the kids and we met two or three times a week after school. I kept a record of the words that we missed,” he said. Other tips he gave students was to make them aware of word roots, alternate pronunciations — and their nerves.

“When one child goes down, usually the next child goes down too. They get nervous and misspell. I always told them, ‘It’s not your word. Keep your focus,’ ” said Underwood, who is pronouncer at Saturday’s bee.

Today, many students at the national level have private coaches and they study year round, he said.

Jane Dries, of Pottsville, has been involved with the spelling bee for more than 40 years. She began as a coach at Holy Cross in New Philadelphia, then at Minersville and retired as a spelling bee coordinator and coach for Blue Mountain School District. She will be a judge Saturday.

“The spelling bee has been an important scholastic activity and usually these students do extremely well on their SATS,” Dries said.

Over the years, the source of spelling words have included books, a paideia study guide, online sources and products emerging from third-party providers.

The books provide rudimentary sounds of different languages. Dries, who coached seven spellers to the regional championship, remembers many of the words at the national level were of German origin.

“It’s important that they know the sounds. The words have become increasingly more difficult,” she said.

The national event used to be held in Washington, D.C., and within walking distance of the Smithsonian museums, but it has moved further away, Dries said. One of the treats Dries arranged for participants was a private tour of the U.S. Supreme Court.

The Scripps National Spelling Bee is administered on a not-for-profit basis by The E.W. Scripps Co. from its headquarters in Cincinnati, Ohio, according to www.spellingbee.com.