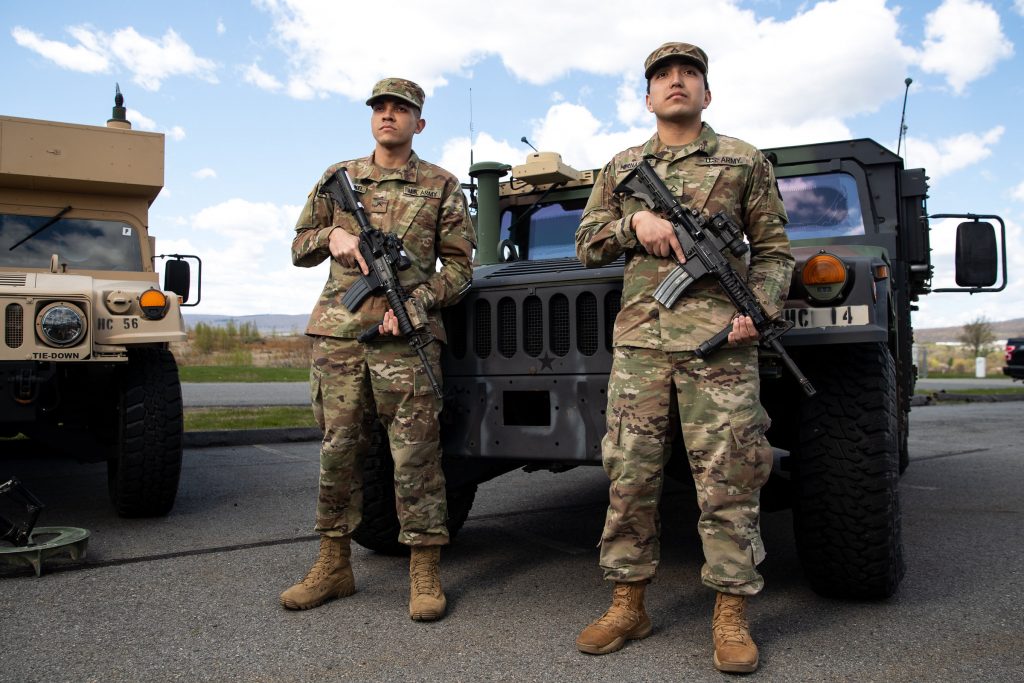 Citizen soldiers protect and serve their country while working, helping and living among their community.

These proud soldiers make up the National Guard, a part of the U.S. military that serves both its region and country.

Here, the Pennsylvania Army National Guard responds to domestic emergencies and conducts overseas combat missions, counter-drug efforts, reconstruction missions and more. These soldiers hold civilian jobs or attend college while maintaining military training part-time, which typically requires one weekend each month, with a two-week training period once per year. Their primary area of operation is their home state, and the governor or president can call on the National Guard in a moment’s notice.

“There is nothing quite like the citizen soldier,” said Lt. Col. Robert McAllister, the battalion commander for the local National Guard unit, 1st Battalion, 109th Infantry Regiment, in Scranton. “I am continuously amazed at how our soldiers, who simultaneously hold down full-time civilian careers while maintaining family responsibilities, are readily available to selflessly serve our community during these difficult times.”

The National Guard holds infinite possibilities for those who join with choices that are not limited to combat. Soliders have a host of other job opportunities as well as educational and other benefits.

Soldiers typically enlist in the National Guard at different pay grades according to their prior civilian-acquired education. Soldiers can receive more than $30,000 per year for any Pennsylvania college of their choice or free tuition to state schools, plus more funds for expenses. They also can choose from additional benefits, including a $20,000 sign-on bonus for select jobs or student loan repayment.

Thanks to the Military Family Education Program, aka the Pennsylvania G.I. Bill, which Gov. Tom Wolf signed into law last year, the spouses and children of National Guard members can attend college for free or at a reduced cost. Soldiers also can select from a variety of majors or career paths. Education benefits cover almost every aspect of higher education, McAllister said. One can obtain a Commercial Driver’s License or attend a culinary or trade school.

A big part of Pfc. Fernando Hernandez’s decision to join the National Guard was the benefits. From the paid education to the sign-on bonus, the Hazleton resident and Brooklyn, New York, native knew this was the smartest move to invest in his future.

While Hernandez, 20, never thought about a military career while growing up, he earned the rank of Eagle Scout thanks to his mom, Marina Espanza. When his sister wanted to join and met with a recruiter, Hernandez became curious, too, and was most surprised by the amount of job opportunities within the National Guard.

“For every one soldier, there’s five more in the background helping (them) out,” Hernandez said. “It’s not only combat. It’s all over.”

A signal support systems specialist in the National Guard, Hernandez is responsible for working with battlefield signal support systems and terminal devices, which must work consistently in order to direct movement of troops. He plans to attend Bloomsburg University in the fall to study computer science and said his National Guard training and experience will help with his curriculum and the rest of his life. Hernandez also likes being one part of a bigger picture.

“That feeling when everything is set up and it’s working and that connection is made, that’s it,” Hernandez said. “When everyone gets back safe, that’s the best part … making those connections and keeping everyone safe.”

“That was over 20 years and nine ranks ago,” Boyd said. “I ended up enjoying what I did in the Army and wanted to continue that in the National Guard, eventually deciding to become an officer.”

The ability to make a difference was part of Pfc. Jordany Krawinkel Peralta’s decision to join. Growing up in the Dominican Republic, Krawinkel Peralta, now 20, knew the military was always part of his plan. The son of Victor and Farcomeri Krawinkel, he came to the United States in 2016 and then to Northeast Pennsylvania the following year. He intended to enlist in the Air Force, but the West Hazleton resident felt the National Guard was a better fit.

A permanent resident of the United States at the time, Krawinkel Peralta had to endure a waiting period for security clearances and other protocols before he heading to basic training at Fort Jackson. It was tough but he knew it would make him a better soldier and person.

“I would motivate myself with a saying … ‘Until blood comes from my eyes, all bones in my body break, until I’m the soldier I want to be,’” he said. “Every single time I was going through a really rough time, I used to say that to myself to remind me of what I was doing. Being motivated is what’s going to get me through everything.”

Krawinkel Peralta is a computer information systems major at Luzerne County Community College, set to graduate this month and move onward and upward. He continues his work at Hazleton One Community Center — a position he earned thanks to being a soldier — where he fulfills a number of roles to meet needs of his community.

Through the National Guard’s education program, he plans to transfer to Kutztown University into the military science (Army ROTC) program, where he’ll study nearly tuition-free. He hopes to move up the ranks to become an officer in the National Guard.

“I want to be like the (kind of leader) I had in basic training,” Krawinkel Peralta said. “That way I can help more people.” 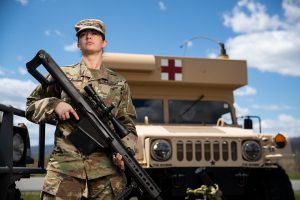 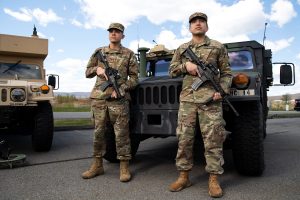 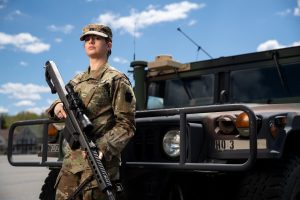 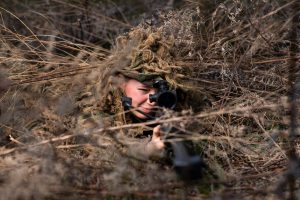 Private First Class Emma Garrera of the 1st Battalion, 109th Infantry Regiment of the Pennsylvania Army National Guard wears camouflage while holding a sniper rifle in a field at the Armed Forces Reserve Center in Scranton on Thursday, May 7, 2020. Christopher Dolan / Staff Photographer 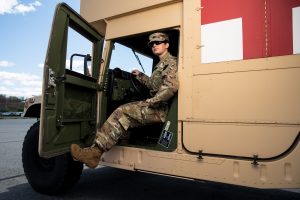 In some instances, the National Guard is part of the family. McAllister served as inspiration for his nephew, Spc. Kevin Klatt Jr. of Dunmore to join. The son of Kevin Sr. and Erin Klatt, the 25-year-old has always looked up to his uncle and wanted to follow in his footsteps.

“I definitely remember him in his uniform when I was younger and him being that hero,” Klatt said. “That kind of fueled that fire of me wanting to join.”

The benefits also were a big reason why Klatt made the decision after graduating from Wilkes University. In addition to the enlistment bonus, the National Guard will pay back all of his federal student loans. Klatt, who just returned from basic training a few weeks ago, works for the state in his civilian life and said his job has been flexible with his National Guard commitments. He will join Company A, 1st Battalion, 109th infantry in Honesdale.

“It’s the best of both worlds,” Klatt said. “You still have your civilian life, work full time and can be home but you also have the National Guard. You’re part of the military, part of a team that’s bigger than yourself and part of something that’s helpful to the community while you serve your country.”

Capt. Mary K. Steppacher joined the National Guard to serve but stayed because of its mission. Moved to join after 9/11, she has been in the Guard for 17 years and today serves not only as Personnel Officer, 1st Battalion, 109th Infantry Regiment, 2nd IBCT, but also as Warfighter Exercise Planner for 55th Maneuver Enhancement Brigade. Steppacher had the opportunity to defend her country and see parts of the whole she might not have otherwise. And when she returned home, she gave back to her home region.

Steppacher sees volunteering and selflessness at the heart of the National Guard. Outside, soldiers work as doctors, nurses, lawyers, dentists and more. They lead their daily lives with the understanding that they must be ready at a moment’s notice if their nation needs them. Steppacher takes pride in the way she and her fellow soldiers work to serve not only the country but also the people and region they love the most.