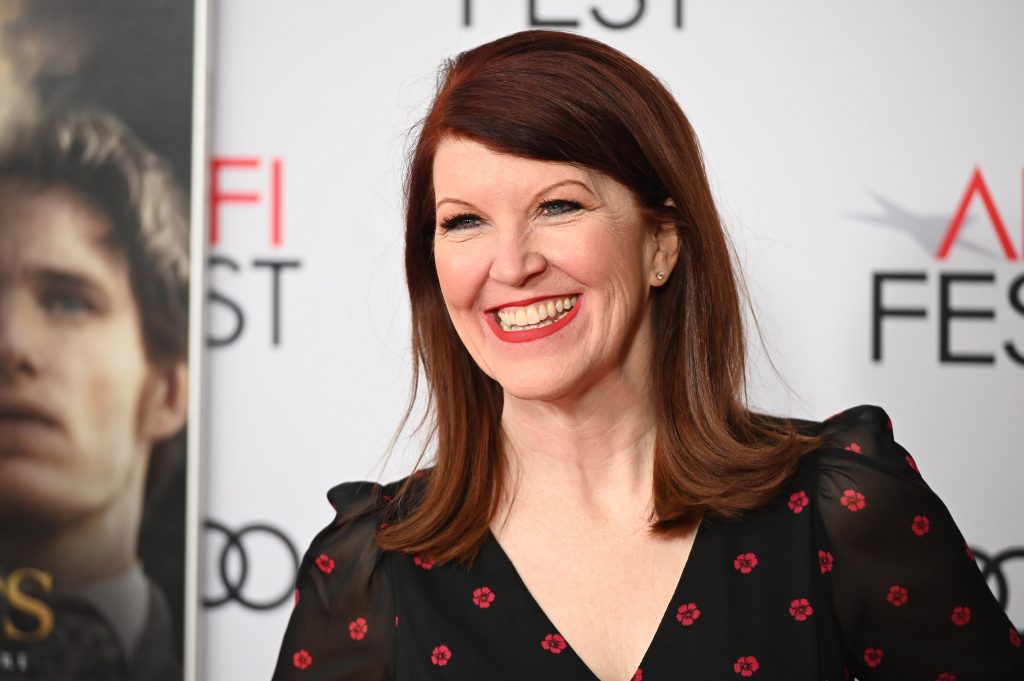 Six degrees of Kate Flannery: From improv to ‘The Office’ to ‘Dancing with the Stars’

Like so many household names in comedy who hoped for a shot on “Saturday Night Live” early in their careers, Kate Flannery has a Lorne Michaels story. It was 1991 and she was living in Chicago and performing with Second City’s touring company and in a show at the Annoyance called “The Miss Vagina Pageant.”

Michaels, “SNL’s” executive producer, was in town looking for new talent. “So we actually had to do a special showing of ‘The Miss Vagina Pageant’ for him,” Flannery said. “He came with Quincy Jones, which was crazy.”

The next day Michaels took four members of the cast out to lunch. “It was a lot of questions about family and, I don’t know, it was very surreal. And I remember at one point we were at Navy Pier and a Paul Simon song came on and he said, ‘Oh, this is Paul.’ And I was like, ‘What?’ because I forgot that he was friends with Paul Simon (laughs). Then I had to submit a tape and I was told I was too similar to Julia Sweeney, so I didn’t get to go for the final audition. They ended up hiring two people from our show, Melanie Hutsell and Beth Cahill, and I felt happy for my friends, but it was weird.

“All of us were thinking that ‘Saturday Night Live’ was the only goal. But I think quickly we learned that there are other ways to carve out a career, like Jeff Garlin, who had been in and out of Second City, and all of a sudden he was doing ‘Curb Your Enthusiasm.’”

Flannery’s big TV break was “The Office,” in which she played Meredith — she of the withering stare and questionable relationship with alcohol — for nine seasons. More recently Flannery competed on the recent season of “Dancing with the Stars.” And this weekend she returned to Chicago with longtime friend Jane Lynch, bringing their “Swingin Little Christmas” cabaret show at City Winery. 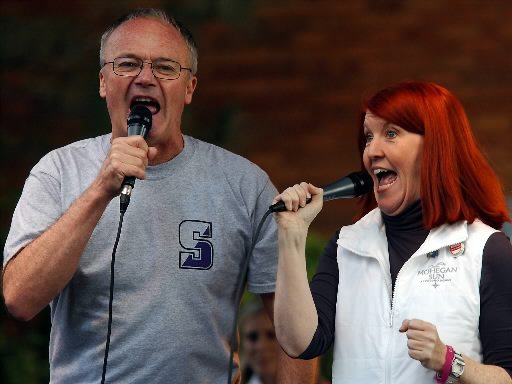 ACCESS NEPA FILE PHOTO
Actors from The office Creed Bratton and Kate Flannery sing a duet on stage at the University of Scranton in 2007.

The following is an edited transcript.

Q: Give me an idea of what “Swingin Little Christmas” entails.

A: The simplest way to describe it is we’re kind of like the Rat Pack — that sense of play, but with a couple of funny women. It’s a live concert and some of the music is beautiful and some of it is fun and catchy and swingy.

We do a lot of standards but in a way that you haven’t heard before. We do “We Three Kings” like (jazz pianist) Dave Brubeck’s “Take Five,” which is an idea I had and I can’t believe we made it happen. And I do “Good King Wenceslas” but I do it like Louis Prima’s “That Old Black Magic,” if that makes sense. Actually, when it we do it live it’s more like “Good King What’s-His-Face” because I keep mispronouncing the name.

Q: What happens between songs? It is conversation or stories or are you razzing each other?

A: Some of each. We’re definitely taking the audience on a ride. This isn’t like, meandering self-involved cabaret. Some of it is improvised. The great fun of working with Jane is we’ve known each other since 1989. She was the one who was like, “You can just sing, you don’t have to be a character. We can just do this as ourselves.” We’ve performed so much over the last five years — we’ve played the Kennedy Center, we’ve played that series at the Lyric Opera at Chicago, we’ve had great runs in New York at Joe’s Pub and some of these huge halls in so many great places. And we so love the Chicago audiences. They get everything. The smartest audiences, the most supportive. This was the best place to start my career. Really.

Q: You grew up in Philadelphia, so I was curious how you found your way to Chicago.

A: I had gone to theater school but I wasn’t sure exactly what I was going to do. And my aunt, my mom’s sister, she had been in Chicago since the early ’60s — she and my uncle lived in Lincoln Park — and she thought Second City would be a really good fit, so she sent me a ticket to come check it out.

My first time seeing a show at Second City, Jane Lynch was actually understudying for Bonnie Hunt that night. Bonnie Hunt got married that day and came back to do the improv set in her wedding dress and the whole wedding party came back with her, too. I will never forget that show, it was nuts!

So I moved to Chicago in March of ’89 and went to all the Rich Melman Lettuce Entertain You restaurants looking for a job. The first one to call me back was Cafe Ba-Ba-Reeba! and I worked there for several years. I believe I took Amy Sedaris’ place, because she had just been hired at Second City.

Q: Listening to you tell these anecdotes, it’s like the Six Degrees of Kate Flannery.

A: (Laughs) Well, Second City is the launching pad of so many people. When I started taking classes there, (improv guru) Del Close was directing the mainstage show called “The Gods Must Be Lazy” and that was with Chris Farley right before he got “SNL” and Tim Meadows right before he got “SNL.” That cast also had Dave Pasquesi and Joel Murray. I mean, the greatest cast. I think I saw that show four times a week, because when you took classes there, if there was room you could watch the show for free, so I took full advantage.

I was studying with Mick Napier at Second City and his theater, the Annoyance (which he founded), had just opened and they were doing two shows: “Co-Ed Prison Sluts” and “That Darned Antichrist.”

And one of the actresses, Susan Messing, he father was sick so she had to miss a performance of “That Darned Antichrist,” so I was asked to understudy for her. I was on the phone telling my dad — my very Catholic father — on Easter Sunday that I was doing “That Darned Antichrist” and he didn’t know what to say. He was like, “That’s nice, here’s your mother.” 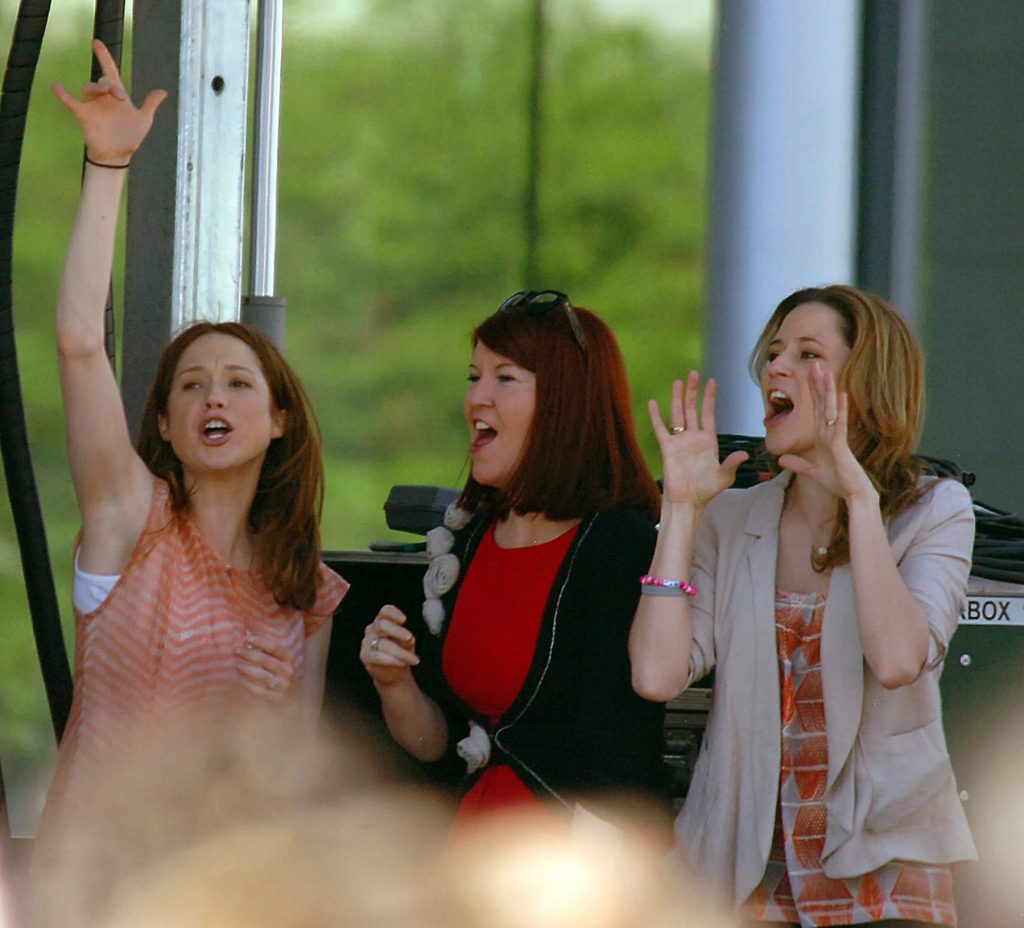 ACCESS NEPA FILE PHOTO
From left: “The Office” stars Ellie Kemper, Kate Flannery and Jenna Fischer perform on stage in downtown Scranton during “The Office” Wrap Party in May 2013.

Q: You did probably one of the biggest shows to come out of the Annoyance, “The Real Live Brady Bunch,” which was a tongue-in-cheek but word perfect recreation of actual episodes. You played Alice, the family’s housekeeper, and Jane Lynch played Carol Brady.

A: I was Jane’s understudy at first and was doing just the live commercials and a bunch of the non-Brady roles. And then I took over for Alice for quite a while. Steve Carell was the first Greg Brady, so that was the first time I met Steve. Andy Richter played Mr. Brady at one point. And Mick Napier was the first Bobby Brady.

Q: You were cast in some buzzy shows in Chicago only two years after you moved here — did it feel like you were on your way to big things?

Q: When did that purgatory end for you, was it landing “The Office”?

A: Yeah. It was 2004 when we started filming it. I had gotten myself into some financial trouble because of an ex-boyfriend, so even while I shot the first season of “The Office” I kept my restaurant job. This was when Steve Carell was “The 40-Year-Old Virgin” and I joked that I was the 40-Year-Old Waitress.

And the nice thing about “The Office” is that it has this incredible second life because of streaming. I didn’t realize this until years later, but this was actually better than getting “SNL” because people are living it over and over again.

There’s a few of us that have done pop culture ComiCons this year and if anybody comes up to me and says, “I’m the Meredith in my office,” I believe them because only the Meredith in the office would be loud and proud about that (laughs).

Q: Tell me about “Dancing with the Stars.”

A: I am not a fan of cardio — waiting tables was my cardio — so I was like, “Just don’t shame the family.” And luckily I pushed through. I had danced in college but not since then, so I didn’t know if I could physically do it. But I forgot how much I loved dance.

I … gosh, it’s been a tough year for me. My sister Nancy was in hospice in May and June. She was 60 and had metastatic breast cancer. Sorry, I feel like I’m getting into this crazy left turn but I brought it up on the show. I got a call from my rep saying ABC was interested, and this happened while I was literally driving home from her funeral.

I didn’t know who I was going to get as a partner and I got the new guy, Pasha Kovalev — he and his wife are national champions, they just left the competition world — and this was the best teacher-student relationship I’ve had. Literally, I was dancing with the best dancer in the country.

A: The second week I got the highest score and I was like, “What?” and then I was like: Oh, maybe this is possible. So, I don’t know if I thought I could win because I’m 55 and all the other women on the show are in their 20s, but I got into it. I liked the process.

Even though I didn’t win, I felt like the slight outrage of my departure — and tremendous outrage from some people (laughs) — was a huge surprise. I feel like so many women take themselves out of the game — like, oh that ship has sailed — especially as they get older, but they’re still doing all the heavy lifting in the family. And I feel like we’re not represented on television; there’s a mild nod once in a while, but it feels like we’re the minority. So I had no idea that there would be this mantle that I would pick up and just be, for a few weeks, the voice of women who really need to be seen. It was a great experience.

And now I have to keep doing cardio because I’m doing the “Dancing with the Stars” tour that starts in January.