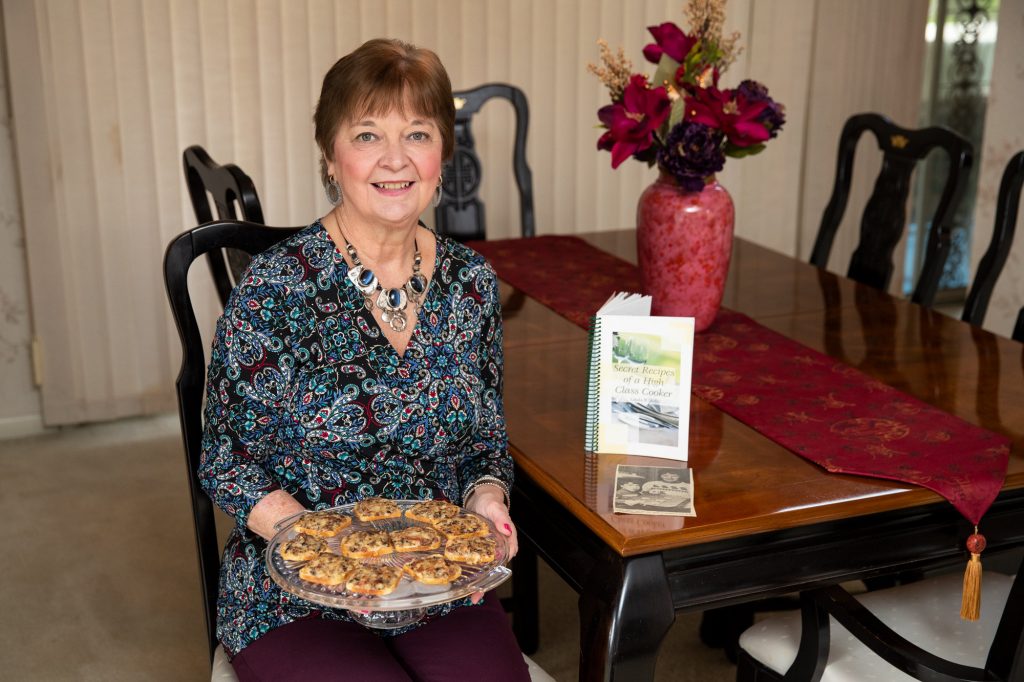 Whether friends, family or co-workers, people often asked her for the recipes of the dishes she brought to parties and get-togethers.

“It will be in the book,” the Scranton resident told them. Finally, in 2009, Aebli’s cookbook, “Secrets of a High Class Cooker,” dedicated to her late parents, Rosella and Robert Brandt, became a reality.

Filled with 400 recipes from her repertoire, the book includes one of her most-coveted: her Cheese Sizzler Appetizer recipe. It was such a hit that, in 1985, the recipe was featured in the Scranton Times, along with a photo of Aebli and her younger son, Mark, who was two at the time. (She has two sons, Corey, 43, and Mark, 36.)

“I have been preparing this recipe for at least 40 years,” she said of the appetizer, which earned her a $50 grocery gift card to Riccardo’s Market, 1219 Wheeler Ave., Dunmore. “It has always been a favorite at parties and family get-togethers.”

Cheese Sizzler Appetizer recipe is pretty simple, Aebli said. She advised cooks to only add one tablespoon of onion at a time. Too much onion all at once will overpower the taste of the other ingredients, she said. Aebli also suggested cooks to use Pepperidge Farm Party Rye Bread as it yields the tastiest results. However, she still urged cooks to make the recipe their own, because “it is important to trust your instinct as a cook.”

Aebli has honed her own instincts in the kitchen over decades, though, she wasn’t interested in cooking at all as a young girl. In her early 20s, Aebli discovered her love for it while she was living in Roslyn, Virginia, and working for New Jersey Congressman Edwin Forsythe’s office. The older women in the office gave her some advice and Aebli bought her first cookbook. She’s been hooked ever since. While raising a family, Aebli would try out new recipes for her husband and two sons. They would playfully grade her recipes, and she would mark them down in her cookbooks.

“It kept mom happy,” she said. “Even today, when I pull out a recipe and I see those grades, it brings back happy memories.”

When cooking, Aebli likes to put dishes together based on a specific ingredient. She’ll look in cookbooks or online for some inspiration and comes up with her own creation. For Aebli, the best part of cooking is the free-flowing creativity that goes into it.

The city woman also has enjoyed making meals to give to her family during this time, including her sons and daughter-in-law, Katie Reed Aebli, as well as granddaughter, Anna Aebli, and her mother, Maggie O’Brien.

Prior to retirement, Aebli was executive director of Scranton’s Office of Economic and Community Development.

While she still works part-time as event planner for the Waldorf Park German American Federation, Scranton, she finds more time to dedicate to the kitchen now, which is where she feels happiest.

“I have a lot more time to live up to my name: ‘the High Class Cooker,’” she said, laughing.

Mix together all ingredients except bread, adding one tablespoon of onion at a time. Spread mixture on party rye. Place bread on a cookie pan and broil until cheese turns golden-brown.