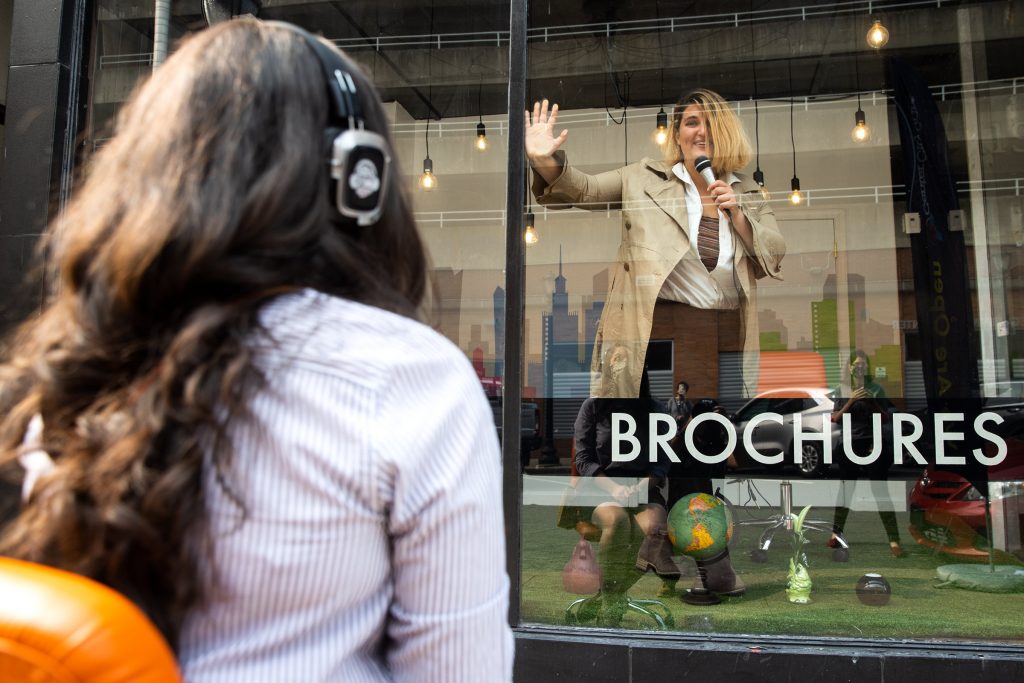 The window of opportunity to catch live theater opens again this week.

Actually, several windows at spots throughout downtown Scranton will open to the performing arts, thanks to a returning program the Scranton Fringe Festival piloted last year.

“Fringe Under Glass” returns for four performances happening from Thursday, Sept. 23, through Saturday, Sept. 25. Just like last year, “Under Glass” combines the performing arts with a walking tour. Acts perform behind the windows of various storefronts while audiences watch from outside, listening via wireless headsets. Each performance lasts about 10 to 15 minutes, and a tour guide will then take audiences to the next stop.

Based on the concepts of the Edinburgh Fringe Festival in Scotland, Scranton Fringe began in 2015 and welcomed a wide range of performing arts to play across around the city each year. With venues unable to host programs because of concerns about spreading the coronavirus, however, the Fringe decided to offer something different last year that would let it continue its mission while keeping people as safe as possible. The “Under Glass” program ended up selling out, Fringe co-founder Conor Kelly O’Brien said.

“The response from the audience was fantastic. … We could not have been happier with it,” he said. “The technology was so fantastic to experiment with.”

With safety their No. 1 priority, O’Brien said organizers believed it was in the festival’s best interest to present another “Under Glass” edition this year instead of a traditional festival. They begin planning the next festival as early as February or March, O’Brien said, and they believed COVID would still be a serious threat when September rolled around.

“We wish we were proven wrong,” he said.

The Fringe will have coronavirus-related safety measures in place, including requiring performers to be vaccinated or show proof of a recent negative COVID test. The tour guides also must be vaccinated and will ensure every stop is sanitized between performances.

Audiences will meet at AFA Gallery, 101 Penn Ave., and then depart to the participating venues, which organizers are not revealing ahead of time. Tickets cost $20, and O’Brien highly recommends people buy tickets in advance since the festival ended up having a wait list for tickets last year. If it does have any tickets left, people can purchase them at the gallery that night.

This year’s performers include Northeast Pennsylvania groups the New Vintage Ensemble, Gaslight Theatre Company and the Farm Arts Collective. The collective will perform scenes from “Dream on the Farm,” a recent sold-out production that The New York Times featured. The Living Theatre, the longest-running experimental theater company in the country, will travel from its New York City home to present “A Day in the Life of the City: Scranton.” Other performances are planned as well.

“It’s a great way to get out (and) be safe while we’re still at the height of this pandemic. … We’re really proud and excited and hopeful,” O’Brien said.

While the theater industry has begun a slow recovery from the pandemic, O’Brien said, “it’s still very much below what it was pre-COVID.” The festival, though, gives performers a chance to not only showcase their talents but also get paid to do it.

“One group, this is the first time they’re performing in person in over a year,” O’Brien said. “I can only imagine how significant an opportunity like this is for some of the artists.”

O’Brien also sees “Under Glass” as an opportunity to help downtown businesses, which could benefit from audience patronage.

“It’s obviously very different going from the 2019 festival, which had something like 10,000 people in attendance across two weeks. … Nonetheless, the spirit was there (last year),” he said. “People had such a phenomenal time. It was great for downtown.”

And the show has something for everyone, he added.