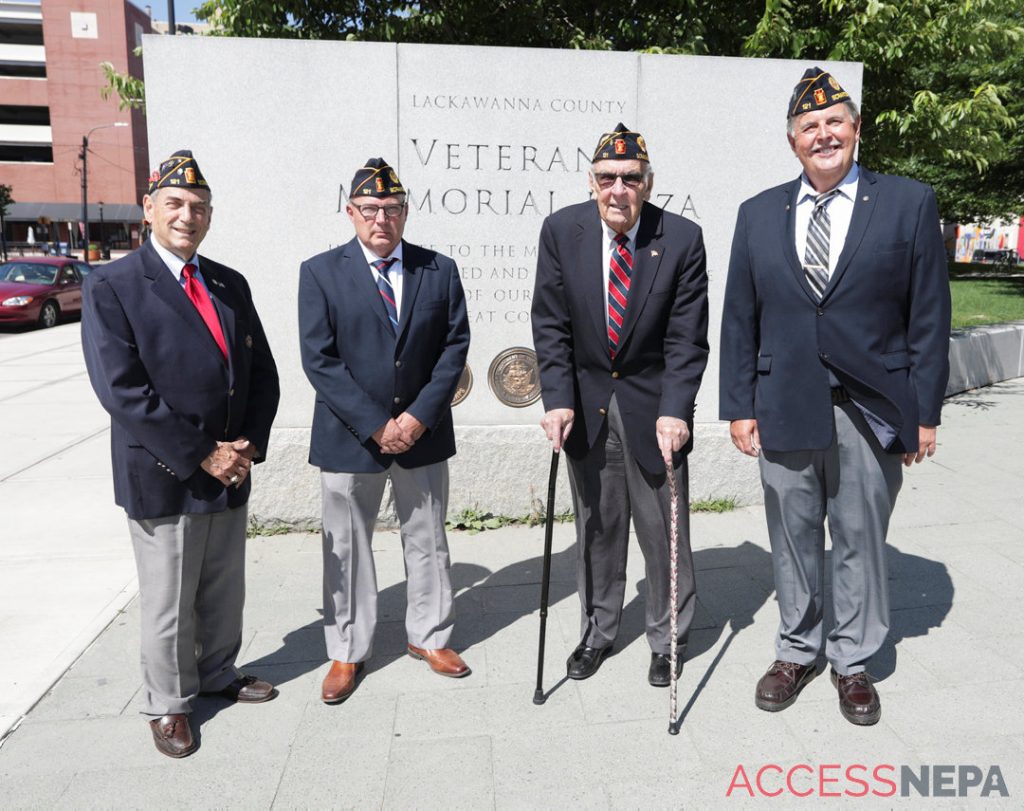 The world may look drastically different than it did 100 years ago, but the Koch-Conley American Legion Post’s commitment to honoring veterans remains strong.

Chartered Sept. 1, 1921, the Scranton-based post, No. 121, marks its centennial this year. Founded in the wake of World War I, the post took its name from two servicemen from South Scranton, Louis Koch and Edward Conley. Koch served in the Army and was one of the first men from Scranton to die in action in that war, while Conley was the son of the post’s first commander, Edward R. Conley. The younger Conley “was fatally hurt while engaged in submarine duty but … lived long enough to reach home,” according to a Scranton Times article from 1938, the year the post hosted the annual convention of the Pennsylvania department of the American Legion.

“It was pointed out that it would be fully appropriate to have the Army and Navy, and also the commissioned and enlisted personnel, honored, and subsequently the names were coupled,” the Times explained.

Although not the first to rise in Lackawanna County after an act of Congress incorporated the American Legion in 1919, just a year after the end of World War I, Post 121 was one of the area’s earliest. Scranton veterans had earlier organized the Duffy and Anthracite posts, which dissolved before obtaining charters, and Victory Post, No. 13, of Dunmore, then became the first chartered post in the county, according to Sunday Times archives.

“The posts are numbered by their accreditation by the national organization, so Koch-Conley … was the 121st post in the country to be chartered by the American Legion,” explained current post Commander Joseph Albert, a retired Army lieutenant colonel who served during the Vietnam and Gulf wars. “So we’re one of the very early posts that were chartered.”

Other veterans organizations existed at the time, Albert noted, with the Grand Army of the Republic consisting of Civil War veterans and the Veterans of Foreign Wars featuring mostly servicemen from the Spanish-American War. The American Legion, then, included mostly men who served in “the Great War.”

Over time, “the American Legion in Lackawanna County grew in strength and posts sprang up in practically every community, with the principal function at that time being Memorial Day activities in honor of departed comrades,” the Times wrote in 1938. 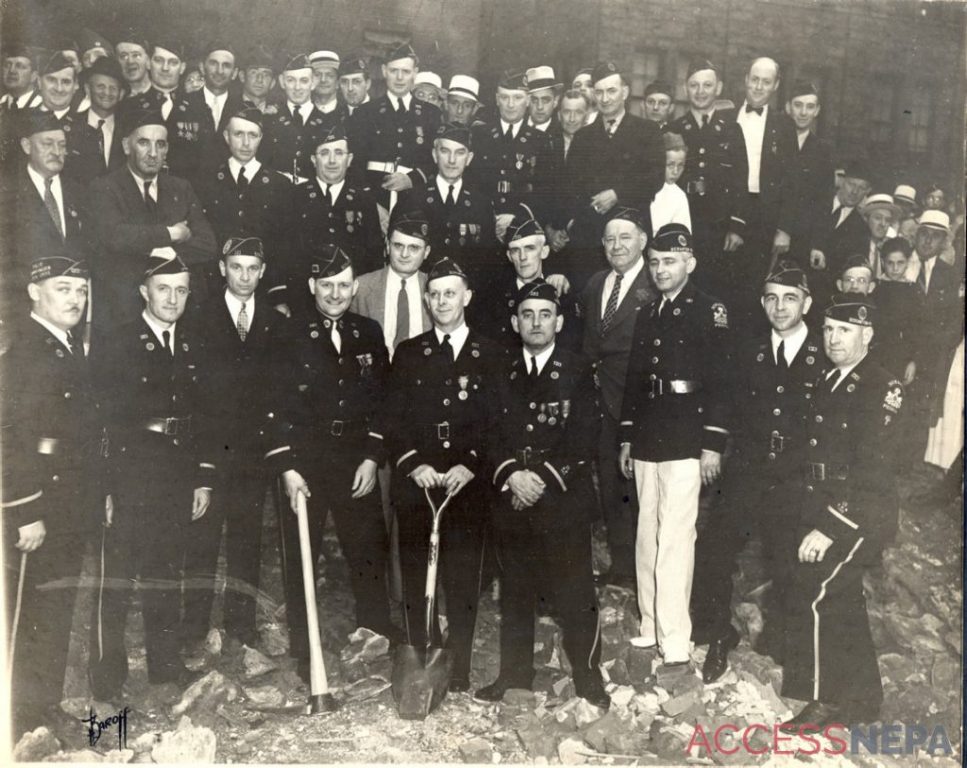 ACCESS NEPA ARCHIVES
Members of the Koch-Conley American Legion Post 121 gather at the groundbreaking ceremony for their new home on the 400 block of North Washington Avenue, Scranton, on June 13, 1936.

For decades, post members honored their fellow veterans at ceremonies, parades and more in addition to serving the wider Scranton community by donating funds and helping out in other charitable ways. Today, Koch-Conley participates in two main events each year: placing flags at thousands of veterans’ graves in Scranton’s Cathedral Cemetery each Memorial Day with the help of volunteers and then hosting a program there on the holiday, and holding a Veterans Day program on Lackawanna County Courthouse Square.

James Joyce, the post’s chaplain and historian, joined the post 12 years ago not only for the civic aspect of honoring fellow veterans but also to feel that sense of relationship again. He served in the military from 1980 to 2001, which included time as an Army medic and with the 109th Infantry Regiment of the Pennsylvania Army National Guard.

Donning their gray trousers, blue suit jackets and caps, he and his fellow post members take pride in holding the public programs and feel honored to do so. They pay their respects to all veterans each Nov. 11 and those “who put the uniform on but never took it off” on Memorial Day, Joyce said.

“There’s a deep respect of course for both of those holidays, but we always like to remind people,” he said. “We all know the lakes are open and the pools are open and it’s cookout season … but let’s remember the purpose of Memorial Day and Veterans Day, for why they were created: (for) the veterans and those who gave (and) deserve their due diligence.”

Post members also took part in a ceremony honoring World War I veterans a couple years ago at Forest Hill Cemetery in Dunmore, where Conley, the post’s one namesake, is buried. (Koch is interred at St. Mary’s cemetery in South Scranton.)

“We all took turns reading some bios about the World War I vets there,” Joyce said. “That was a nice program.” 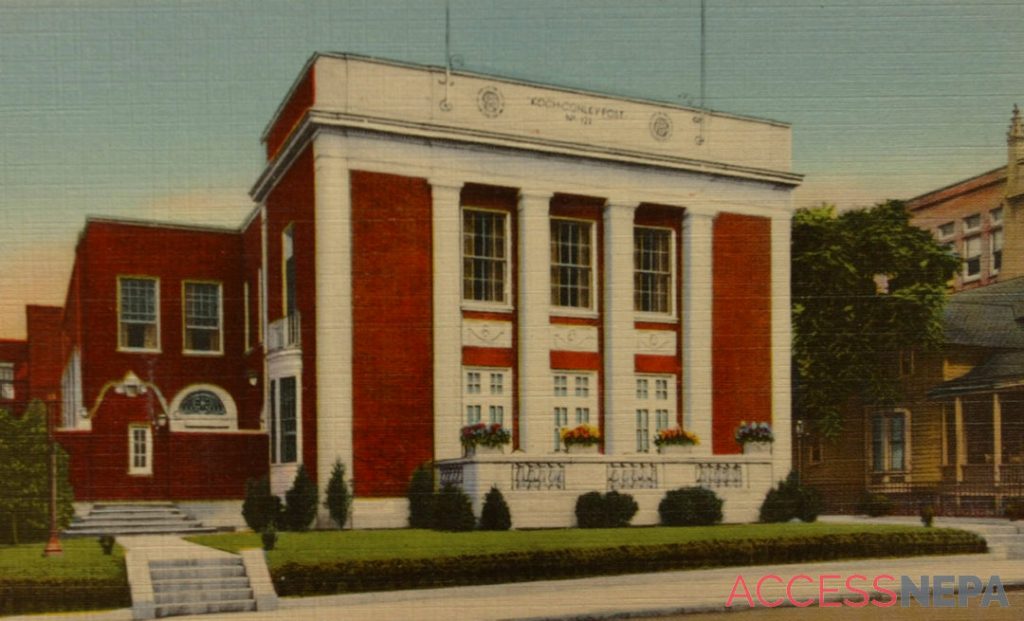 Aside from honoring their comrades, many veterans’ organizations give their members a place to socialize with others who served.

For Post 121, however, home is wherever they make it. In its early days, post members met in the Junger Maennerchor rooms in South Scranton before moving to 321 Lackawanna Ave., according to newspaper archives. The post then erected a grand meeting space at 415 Lackawanna Ave., a $200,000 home it dedicated in April 1937.

“Before, the building was used really as a … community gathering place,” Albert said. “The post took part in all the parades in the city. They had their own band (and) auxiliary of the women.”

“It obviously was the place to be,” Joyce said. “It was a crown jewel in the Legions. … As Legion homes go, it really was quite grand.”

In 1985, however, the post sold the building to the University of Scranton in exchange for establishing scholarships at the school, Joyce explained. The Koch-Conley American Legion Scholarship is awarded based on financial need and academic achievement, according to the U of S. Children, grandchildren, nieces and nephews of Post 121 members receive first preference, followed by relations of members of other American Legion posts in Pennsylvania.

The U of S later exchanged the property with Lackawanna County for a former juvenile detention facility adjacent to campus. The county eventually sold the post home to what was then Lackawanna Junior College. Today, the property is Lackawanna College’s Healey Hall.

After moving out of North Washington Avenue, the post began meeting at Farley’s restaurant, which member Bill Young owned. It moved meetings to the Gino J. Merli Veterans’ Center when Farley’s closed but has been unable to meet there since the coronavirus pandemic began.

Without an official home, the post doesn’t have as much socialization as others, who tend to have bars and hold lots of fundraisers. Post 121 does participate in some statewide and national fundraisers, such as collecting donations for the poppies it hands out each year at various occasions, Albert said. But it has a more relaxed approach to gathering than some other posts, he noted; you won’t find committee reports or other such business when Post 121 meets. 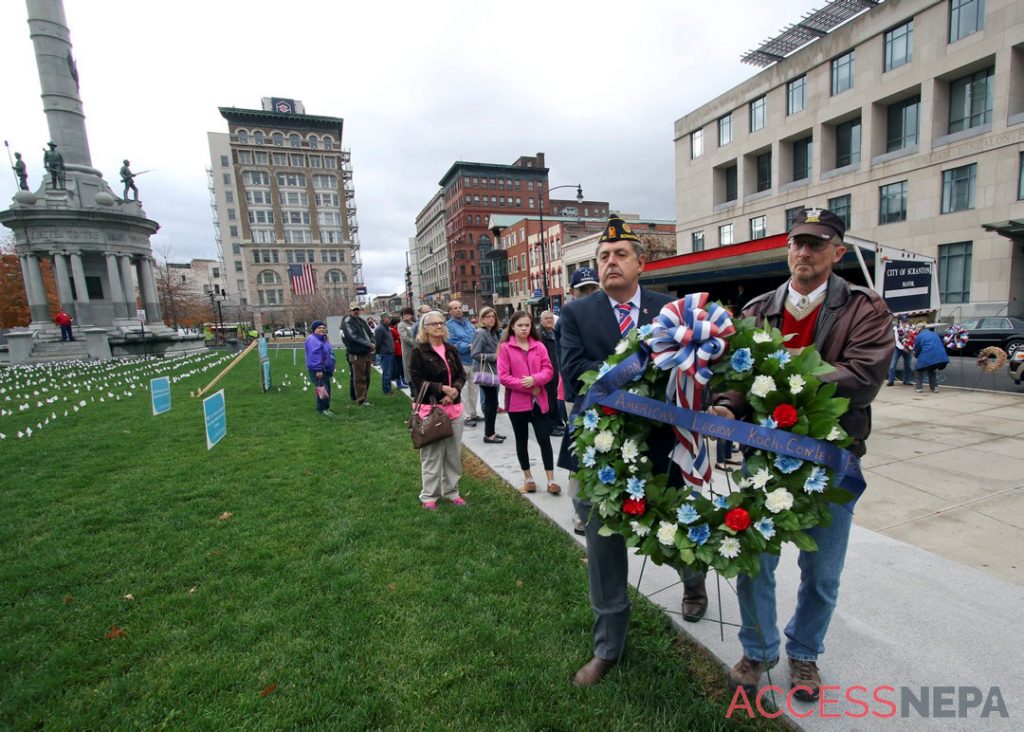 Like many other veterans’ organizations, post membership has dwindled in recent years. Once boasting 5,500 members — making it one of the nation’s largest posts — today it has just 29. Older veterans are passing on, especially those who served in World War II. Post 121 recently lost two longtime members who fought in that war.

Joyce sees some advantages to the post’s size and situation, though.

“It seems as if we solicit (members) more than we get solicited,” he said. “I recently recruited two old friends of mine from (my) National Guard days. The more people who are rowing, the easier it is to row the boat. Without a post home … and only having two functions a year, it makes it easier for a small post like us to keep rowing.”

While it may no longer have a building, an auxiliary or even a drum and bugle corps, the post still has heart and a desire to serve.

“The members that are currently in are still all very active and very proud members, and we’re still actively recruiting,” Joyce said. “And we see a long and happy and proud future. There’s a strong desire to keep the post current and viable and succinct. It certainly deserves that.”