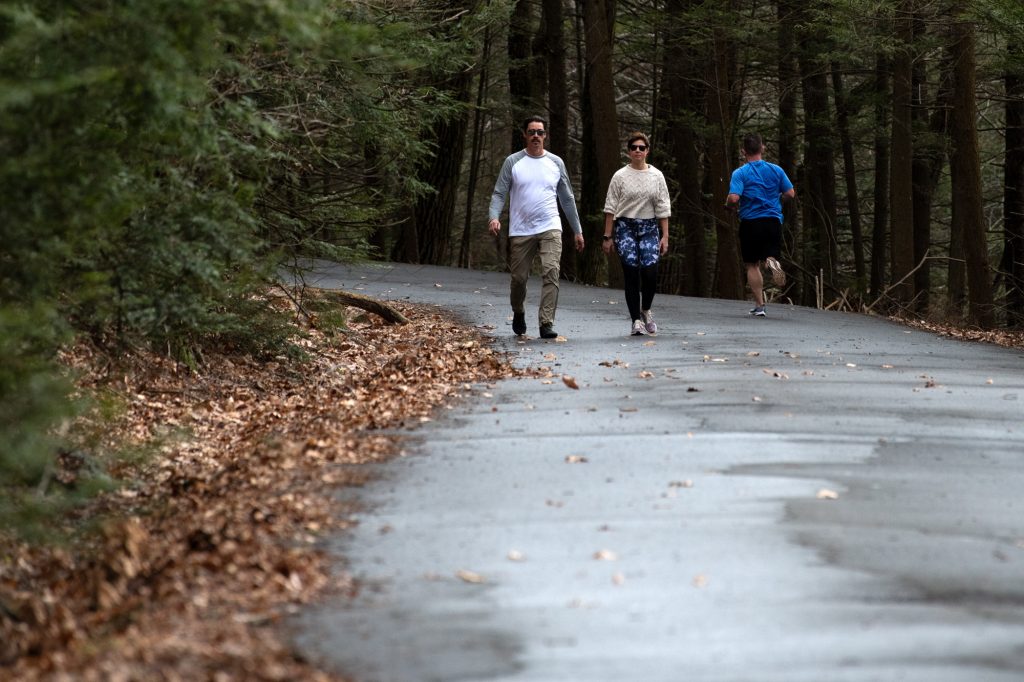 Safe escapes into nature can help during pandemic

As health authorities worldwide tell people to avoid each other, escapes into nature become more enticing.

Hiking and other solo sports such as bicycling, paddling and fishing provide a cure for cabin fever as long as folks keep a social distance.

“Go for a walk or exercise at home,” Jagdish Khubchandani, health science professor at Ball State University, advised early in the pandemic. “Definitely go out in nature as much as possible.”

Regional agencies are leaving a path for hikers, even when closing their doors because of coronavirus.

The Delaware and Lehigh National Heritage Corridor posted that its offices are closed, programs cancelled, but its 140-mile trail is open.

Likewise, at the Carbon County Environmental Education Center, closed buildings but not trails.

At the Carbon County center, Susan Gallagher said now that her work is disrupted she takes solace and gains perspective from the regularity of nature.

“No matter what’s happening in the rest of the world, the juncos are still squabbling at my birdfeeder, the maples are budding out in their normal sequence, and the wood frogs are waking up as expected,” she wrote in the centers online newsletter for March. “… I may not know what tomorrow’s numbers out of Italy or New York will look like, but I can set a mental clock on returning migrants and rousing hibernators, those that appear with such regularity I’d swear they’re consulting a calendar. … Life goes on, every day, even today.”

On March 16, Terry Brady, a spokesman for the state parks, had already been told to work from his home in Montgomery County, where the virus hit early and 12 state parks there and in a few other counties had been closed, partially. That meant visitor’s centers, restrooms, campgrounds were shuttered. Trail rides and other group activities were postponed. But people could still roam the parks.

“DCNR knows when ppl get out in the parks and state forests it’s healthy for them,” Brady said then.

The Department of Conservation and Natural Resources later closed facilities at all its state parks and forests until at least April 30.

“The public can access trails, lakes, roads, and parking for passive and dispersed recreation, such as hiking,” a message on DCNR’s website says.

An order to stay at home that the governor issued allows people to buy food, get services to operate their homes and take part in outdoor exercise such as walking, hiking and running.

“It is OK to go outside for exercise if you do it in a solitary way,” state Health Secretary Dr. Rachel Levine said during a news conference on Saturday. “If you’re going out for a walk by yourself or a run or a bike ride that is fine.” 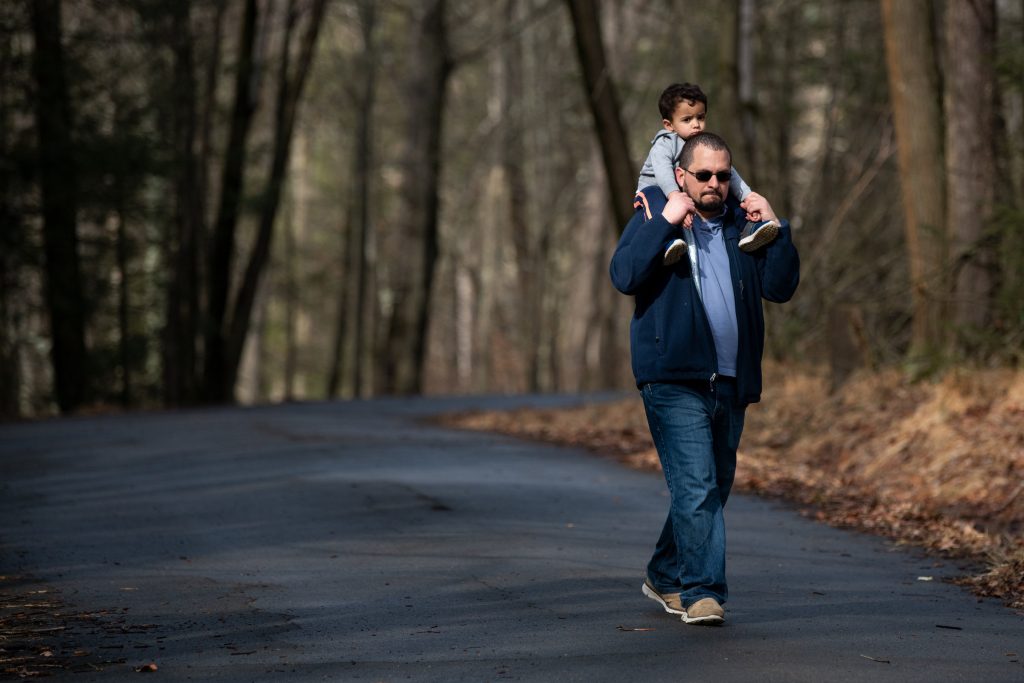 CHRISTOPHER DOLAN / STAFF PHOTOGRAPHER
Helmy Mostafa of South Abington Twp. carries his son, Selim, 2, on his shoulders as they go for a walk around Lake Scranton as temperatures reached 70 degrees on Friday, March 20, 2020.

As a safety precaution, people hiking alone let a friend know where they’re going and when they expect to return. Those friends can point help in the right directions if the hiker doesn’t check in on time.

In Hazleton, Freeland, West Hazleton and Hazle Twp., people have to exercise during the day. A curfew requires people to remain in homes between 8 p.m. and 6 a.m.

People also should be ready to exercise in other places if their favorite spots are crowded or — like Hazle Twp. Community Park — closed.

Dr. Richard Canlas, who in other years invited groups to join him for A Walk with the Doctor along the Hazleton rail trail, said people with the fever or coughs associated with COVID-19 shouldn’t exercise. For healthy people the guidelines for slowing the spread of the disease that apply for work and socializing also apply in recreation and sports.

They include covering coughs and sneezes and staying 6 feet or more apart, which isn’t always possible even in the great outdoors.

For that reason, the Appalachian Trail Conservancy asks hikers to stay away for now. Hikers have filled parking lots and overnight shelters and arrived at popular spots in near record numbers. They risk contracting the disease while sharing picnic tables, privies or food.

“Hiking the AT, in short, has become the opposite of social distancing,” a message from the conservancy says.

Another group, undeterred by pandemic, sought to increase supply to match demand for trails. On March 18, planners with the Rails to Trails Conservancy met, although by video rather than in person, to hone strategy for completing a 200-mile trail between Pittsburgh and Cleveland.

Hunters are waiting for spring gobbler, that most solitary of seasons. For days on end starting on May 2 they might sit alone for hours until a tom responds to their calls.

As anglers prepare to fish for trout, they can buy licenses online through the Pennsylvania Fish and Boat Commission.

The commission told anglers not to help stock trout this year, and as another concession to the coronavirus will open trout season statewide on April 18. For the previous 13 years, the commission held an earlier opening in Southeast Pennsylvania, which was cancelled this year to discourage travel.

When the season opens, it’s hard to find elbow room to cast.

So anglers might want to stay home for the first few days until the crowd thins, unless they know a spot that they can hike to and enjoy in isolation.