Eighties singer-songwriters Rick Springfield and Richard Marx will each offer a solo acoustic set on Sunday, Dec. 15, at F.M. Kirby Center for the Performing Arts, 71 Public Square, Wilkes-Barre. The show begins at 7 p.m., and tickets start at $39.50. They can be purchased at the box office, kirbycenter.org or 570-826-1100.

During a phone interview from his home in Malibu, California, Springfield assured crowds can expect his hits like “Jessie’s Girl” and “I’ve Done Everything for You” but also storytelling songs.

After Springfield’s autobiography, “Late, Late at Night: A Memoir,” came out in 2010, the musician found an outpouring of requests for a storytelling show. During these performances, Springfield feels he can connect with fans personally. While he’ll playfully call out audience members who are getting up for drinks, he also feels the connection between himself and those in the room. The atmosphere allows for more communication and emotion, which means everything to him as an artist.

“It’s telling stories, some jokes and sort of one-on-one,” he said. “I can actually talk to the audience. It’s low-key, laid-back and completely different from a full-band show. ”

As for Marx, the musician released a string of hits during the late ’80s and early ’90s including “Endless Summer Nights,” “Hold On to the Nights” and “Right Here Waiting.” Springfield said he and Marx have been friends since 1985 and decided to join together to go out on the road. Each will perform his own songs in separate acoustic sets before coming together for the encore. It’s a special night for the musicians and fans alike.

“You get to really hear the lyrics of the songs and the stories behind the music,” Springfield said. “You’re all together, sharing those moments.”

An Australia native, Springfield’s first U.S. No. 1 hit, “Jessie’s Girl,” earned him a Grammy award and solidified his place in pop culture. He followed its success with four more top 10 hits, including “Don’t Talk to Strangers” and “Love Somebody,” and has released more than a dozen albums during his career. He also wrote a novel, “Magnificent Vibration,” which made The New York Times Best Sellers list.

Springfield also has kept busy with acting. He starred in the film “Ricki and the Flash” opposite Meryl Streep as well as on TV, including more sinister roles as Dr. Pitlor in HBO’s “True Detective,” Lucifer on “Supernatural” and, most recently, Pastor Charles on “American Horror Story: Cult.”

“Doing stuff against type is always fun for an actor,” he said. “Showing that dark side.”
Springfield promised fans will see him in more acting roles in 2020, and he plans to release a second novel, a new record and a greatest hits album next year. Springfield also will hit the road with Chicago during the band’s summer tour around North America.

“There’s a lot in store over the next year,” he said. 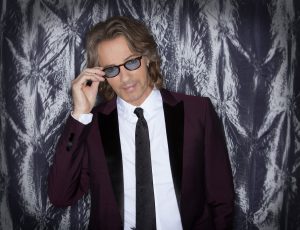 SUBMITTED PHOTO Eighties icons Rick Springfield, above, and Richard Marx will hit the stage for solo acoustic sets on Sunday, Dec. 15, at 7 p.m. at F.M. Kirby Center for the Performing Arts, Wilkes-Barre.