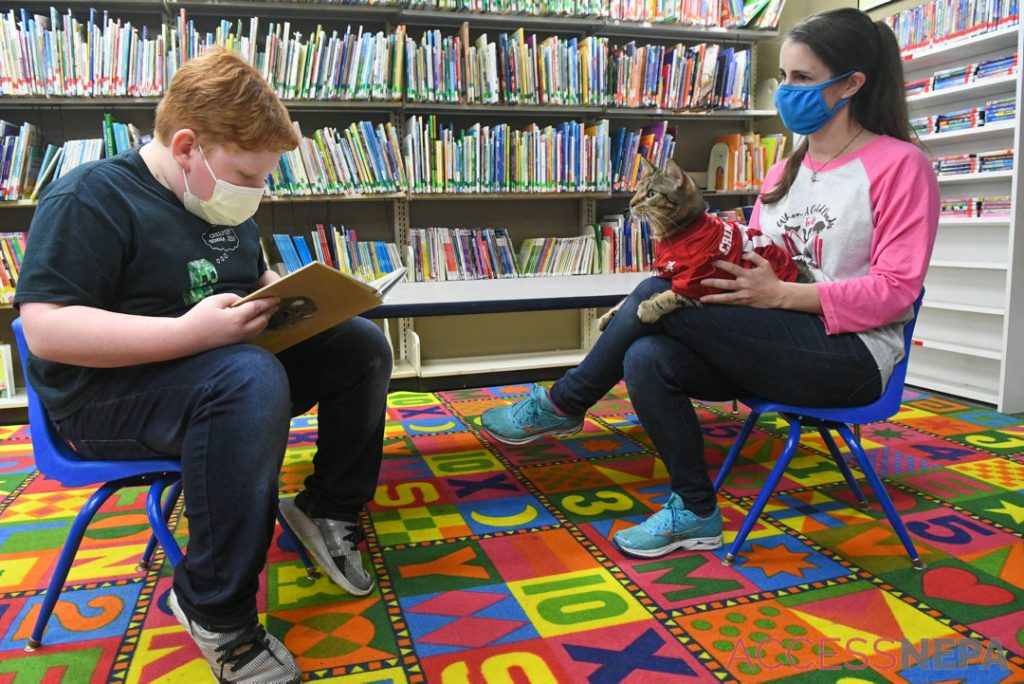 Reticent readers open up to cat at Port Carbon library

While the subject can make the 10-year-old feel uncomfortable, he said he feels at ease when he reads aloud to Henry, a 2-year-old marble shorthair cat.

“It makes me feel comfy, like I’m reading to someone,” he said, “and makes me less nervous.”

Children and adults can read to the cat, owned by library assistant Kelly Davis, at 12:30 p.m. every Tuesday at the Pike Street facility.

Henry, whose full name is Henry Otto Davis, has been coming to the library for almost a year, although he was away from the building for five months because of the coronavirus pandemic, returning three weeks ago. Davis adopted him when he was a kitten from the owner of Otto’s Amusements at the Port Carbon Block Party.

From the beginning, Davis said, Henry wasn’t a typical cat.

“He was so smart,” she said. “Anything he sees a person doing, he’s mimicking it.”

Davis began bringing Henry to the library as a way to release his energy and for her to have a companion at work. Davis worked as a flight attendant for Continental Airlines for 20 years but left on disability a few years ago, suffering from severe facial pain. Since last July, she has been transitioning back to work through the Social Security Administration’s Go Back to Work program.

“I thought this would be a good way for me to start this back to work process and for him to help other people. It’s just convenient that I worked here,” Davis said.

Patrons are allowed to pet Henry, who wears a T-shirt, but are asked to use hand sanitizer before doing so.

The cat is certified with Pet Partners, a Washington-based therapy animal organization. A white bandana with the words “Pet Partners Read With Me” sits on the library’s front desk. Davis said dogs are frequently certified as reading therapy animals.

While her cat “loves to listen to children read to him,” Davis said she stays close by because Henry can be restless.

Before the pandemic, Davis said a few people were coming to the library each week to read to Henry. Hoffert has brought her son to practice his skills with the cat for the past few weeks.

On Tuesday, Adam, who is homeschooled, read “Hardlucky: The Story of a Boy Who Learns How to Think Before He Acts,” by Miriam Chaikin. Henry, wearing a red Crimson Tide jersey, sat on Davis’ lap, occasionally jumping down to walk around.

“He knows Henry won’t judge him or correct him,” Jennifer Hoffert said.

It isn’t just reticent readers who have warmed up to Henry. Davis said a woman working across the street from the library who speaks Spanish also opened up and began talking to Davis when she saw him.

“Cats are great connectors with people,” she said. “(People) just feel comfortable because they have a pet near them.”

Library Director Janet Eich said Henry has been “a real asset to the library,” especially for the youngest patrons.

“Kids get such a thrill out of seeing him,” she said.