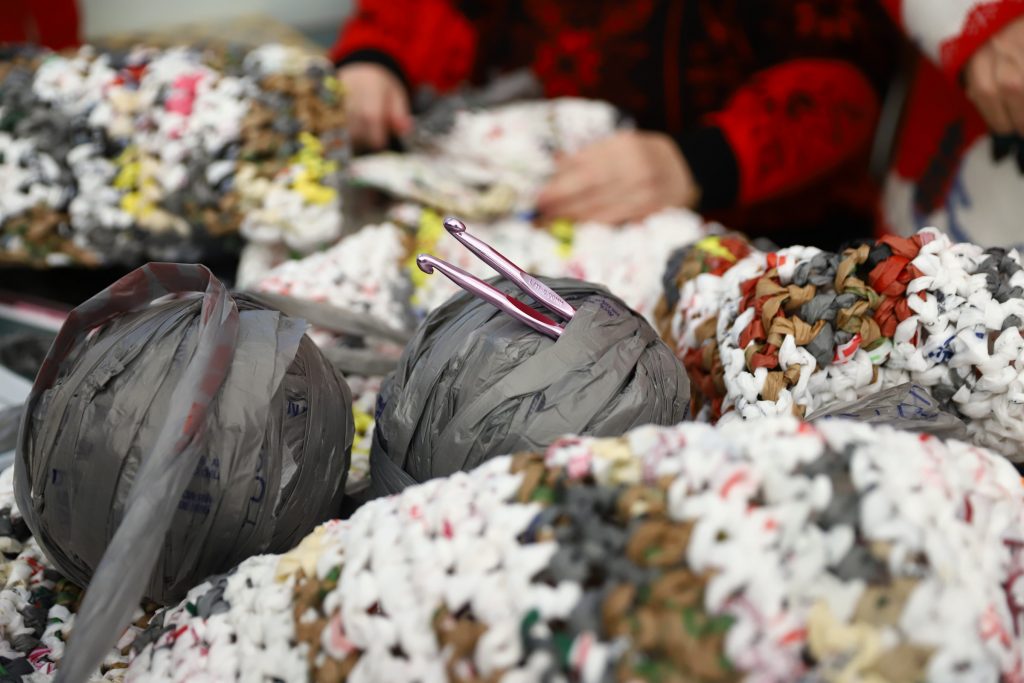 Loretta Heffernan knows some of the hardships veterans face. A retired U.S. Army major, the Teen Librarian at the Taylor Community Library uses her skill of crocheting to let local veterans know their service is appreciated. The project is also environmentally friendly.

A Legion member, Heffernan is spearheading the Vet Mat Project through the Taylor Community Library.

“I was looking for a program to work with the environment, with teens and with seniors,” said Heffernan, reflecting on how the project began. “Every library did something that was earth-friendly. I decided that we were going to [crochet] the mats. I got the information off of the internet. I had seen different ways to get rid of plastic bags on the internet and that’s how we came upon this.”

The teens began by cutting donated plastic grocery bags into strips. They flattened each bag, folded in the sides then cut off the top and the bottom. Each bag provided three or four strips of “yarn” that went toward crocheting a mat to be donated to homeless veterans. Heffernan also put considerable time into cutting the bags herself.

“For about three months, every night for two hours, I cut bags,” she said. “It’s not easy. You have to have really sharp scissors.”

The entire project requires hours of physical labor. However, Heffernan feels she is doing a part to help the environment. When it comes to the crocheting part, Heffernan has help from other senior citizens who visit the library including Connie Richards and Mary Lou Montella. When Leah Rudolph, retired library director at the Abington Community Library in Clarks Summit, caught wind of the crocheting project, she wanted to help and bring the project to the Abington area.

“This is difficult,” explained Heffernan. “If you were going to crochet a yarn rug, it would be much easier (because of the material). You need 700-800 bags per mat. We’ve already done seven mats and Leah has done some on her end, so you can imagine how many bags we’ve kept out of the landfill.” 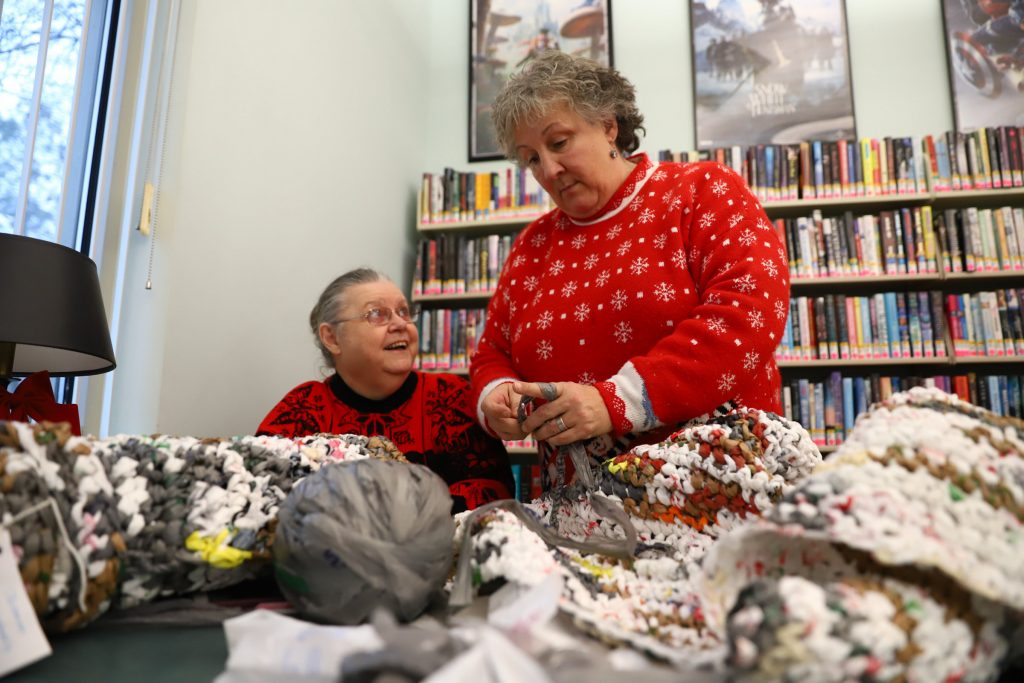 Heffernan noted that Rudolph added a touch of her own to each mat by attaching tags that read “Thank you for your service.” While the mats show the veterans appreciation, Heffernan has no intentions to take credit.

“We’re not looking for accolades, we’re just trying to help someone out and keep them off the wet ground,” she said.

The mats Heffernan crocheted have been donated to the Veterans Administration Medical Center in Wilkes-Barre. Due to the circumstances surrounding some veterans, Heffernan has no idea who receives the mats, but that doesn’t bother her.

“You’re dealing with people who are displaced, and some of them have social issues, mental issues, personal issues,” she said. “As long as it went through an organization that I know is taking care of people, where it ends up after that, I just hope it’s being put to good use.”

Community members can also contribute to the project, via a public workshop on Feb. 8 at 10 a.m. at the Covenant Presbyterian Church, 550 Madison Ave., Scranton. Heffernan will explain all the details of the project and teach the process. People are also welcome to donate grocery bags at the Taylor Community Library during that week.

Heffernan isn’t exactly sure what specifically interested her most about this project but listed many possibilities. As a Legion member, she sees a need for veterans and their families. She also noted that while she is the teen librarian, she wanted to combine teens and senior citizens.

“I like older people, even though I work with teens, I like their challenge,” she said. “I think they have so much to offer us and people have forgotten them. Their wisdom is unbelievable and a lot of them are lonely.”

And Heffernan has a soft spot in for heart for retired veterans.

“It might be, because it’s my background,” she said. “You’re comfortable with what you’ve been doing all your life. You know what you’re doing so you stay with it and you know the audience.”

Heffernan is happy to share the process with anyone who expresses interest. What started out small-scale, her work has attracted the attention from many and garnered the appreciation from fellow crocheters who know how hard it is on their hands, but she just hopes to spread the word.