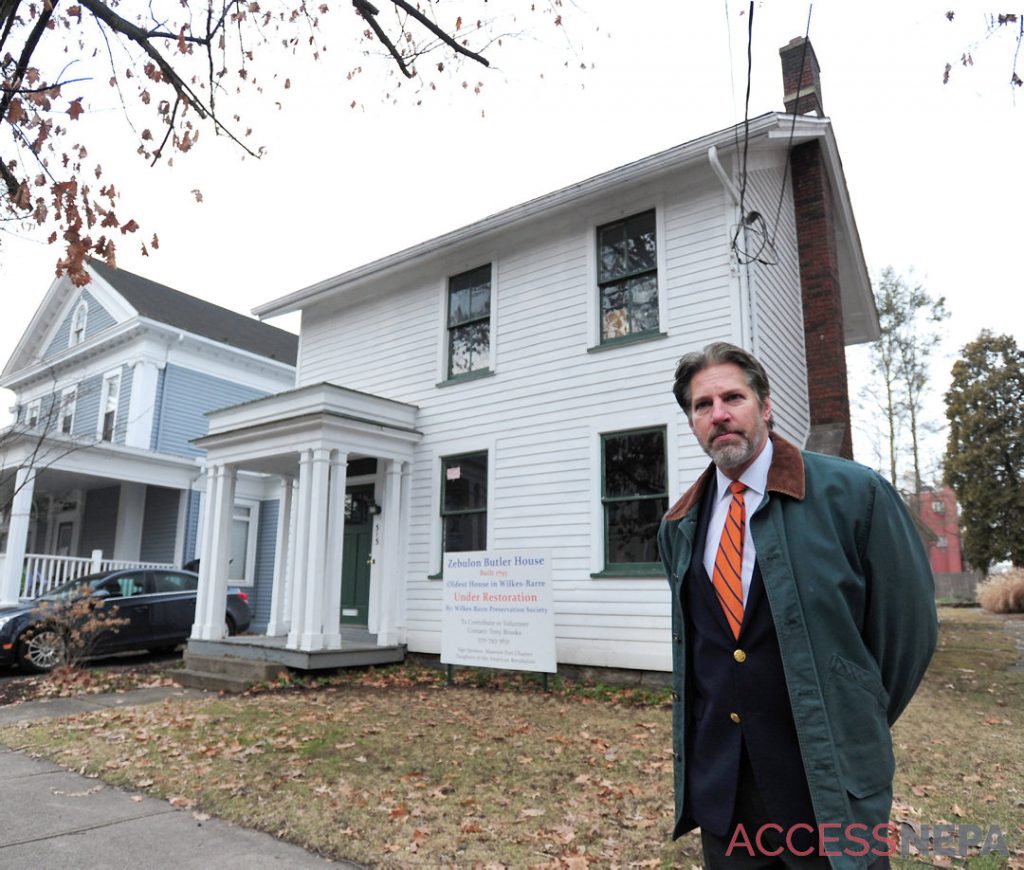 Preserving a bit of Wilkes-Barre for future generations

Family and friends of the Butlers of Wyoming Valley are “gathering,’’ in a way, for the day when the historic Zebulon Butler House shines anew.

Portraits of a Butler descendant and those of friends of Lord Butler have been donated to the Wilkes-Barre Preservation Society, which is slowly restoring the house.

Located at 313 S. River St., the Zebulon Butler House is the oldest house in Wilkes-Barre. It is a Connecticut-style house of the 18th and 19th centuries, painted white with green trim. It was the Connecticut settlers who laid out Wilkes-Barre and built the first homes.

In addition to the portraits, a candle table from 1810, a baby stroller from the early 1800s and a reproduction of a Federal-period window chair have been donated, said Tony Brooks, director of the Wilkes-Barre Preservation Society and curator of the Zebulon Butler House Museum.

“We are always looking for Federal-period items,” Brooks said. “We can use books, portraits, artwork, rugs and furniture. Donated pieces will be displayed in the museum rooms,’’ he said.

The donated portraits include those of Mary Ann Butler, wife of the Rev. Zebulon Butler, a grandson of Col. Zebulon Butler, given by a family descendant living in the Tunkhannock area; a painting of Mary Denison Shoemaker, wife of Elijah Shoemaker, contemporaries of the Butlers, and one of William Ross, a friend of Lord Butler and a Wilkes-Barre businessman after whom Ross Street is named.

The COVID-19 pandemic has wreaked havoc with the renovations. Some work was done in early 2020, Brooks said, including removal of the modern kitchen. This work included stripping post-1936-flood flooring that had been installed over the original 1793 floor.

“Following the repeated flooding of the Wyoming Valley, home owners just put new wooden floors on top of the old flooring,’’ Brooks said. “We are now down to the 1793 beams.’’

Work also had begun on installing a bathroom compliant with disability regulations, Brooks said, but the pandemic halted construction. Restroom facilities will be needed as plans call for tours of the home and museum rooms, Brooks said.

Brooks said the 2021 work schedule will depend on the pandemic situation. Fundraisers such as a garden party, anniversary awards dinner and a Zebulon Butler birthday party are question marks. The Butler House organization plans to honor King’s College with its annual Preservation Award for saving and refurbishing the former Spring Brook Water Company building on North Franklin Street.

The society also hopes that the Colonial Herb Garden created by the Back Mountain Bloomers garden club in 2020 will bounce back in 2021. Perennials were planted in a garden designed by Collyn Hinchey of the Preservation Society board, Brooks said.

“The Butler House will tell the story of the four generations of Butlers and others who lived here,’’ said Brooks.

Zebulon Butler built a log cabin in 1773 at River and Northampton Streets. His son, Lord Butler, built what is still called ”The Butler House’’ over the cabin in 1793. Zebulon’s great-granddaughter, Sarah Richards Butler, moved the building to its present location at 313 S. River St., three years after the Civil War (1861-1865) to make way for a large mansion.

Zebulon Butler is a historic Wyoming Valley figure. He commanded forces in the Battle of Wyoming on July 3, 1778. He represented the Wyoming Valley when it was part of Connecticut. Eventually, competing land claims were settled in favor of Pennsylvania but the Connecticut-Yankee influence lived on in the valley’s culture and architecture. 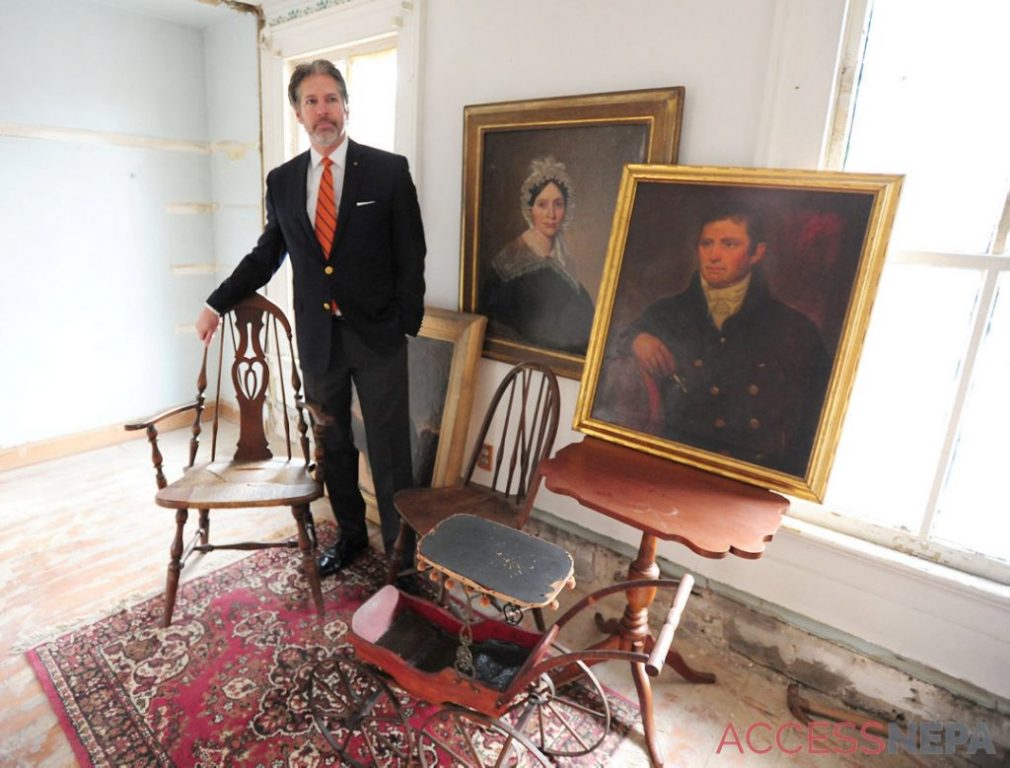 MARK MORAN / STAFF PHOTOGRAPHER
Tony Brooks, director of the Wilkes-Barre Preservation Society and curator of the Zebulon Butler House Museum, stands near portraits of William Ross, right (1761-1842), and Mary Anne Butler (1811-1863). On the floor, partially obscured, is a portrait of Mary Dennison Shoemaker (1803-1833). The portraits are part of a growing collection of historic artifacts at the Zebulon Butler House in Wilkes-Barre.

Either an original coal stove or a reproduction of the model developed by Jacob Cist is planned for the dining room. Cist was an early coal entrepreneur as was Col. John Lord Butler, grandson of Zebulon Butler.

Coal was shipped from the Wyoming Valley on barges early in the 19th Century. Cist and Charles Miner were visionary in identifying the Ashley Planes as a route to get anthracite over the mountains for shipment by rail to the cities of the eastern United States, Brooks said. The Planes operated until 1948. Both men died young and did not see the fruition of their idea.

Brooks, Wilkes-Barre City council chairman, said the house was saved from demolition by the alert intervention of Rebecca Schmidt, a librarian at the Osterhout Library and a resident of the South River Street neighborhood.

The Butler House is featured in one of several videos produced by the Preservation Society.

The Preservation Society members and past donors are asked to renew memberships for 2021. New members are welcome.

Brooks said the Preservation Society welcomes volunteers to do restoration work, to secure period antiques, aid in fundraising, do gardening or other tasks. Donations are essential to fund renovation work. Anyone willing to help can call Brooks at 570-793-3631.