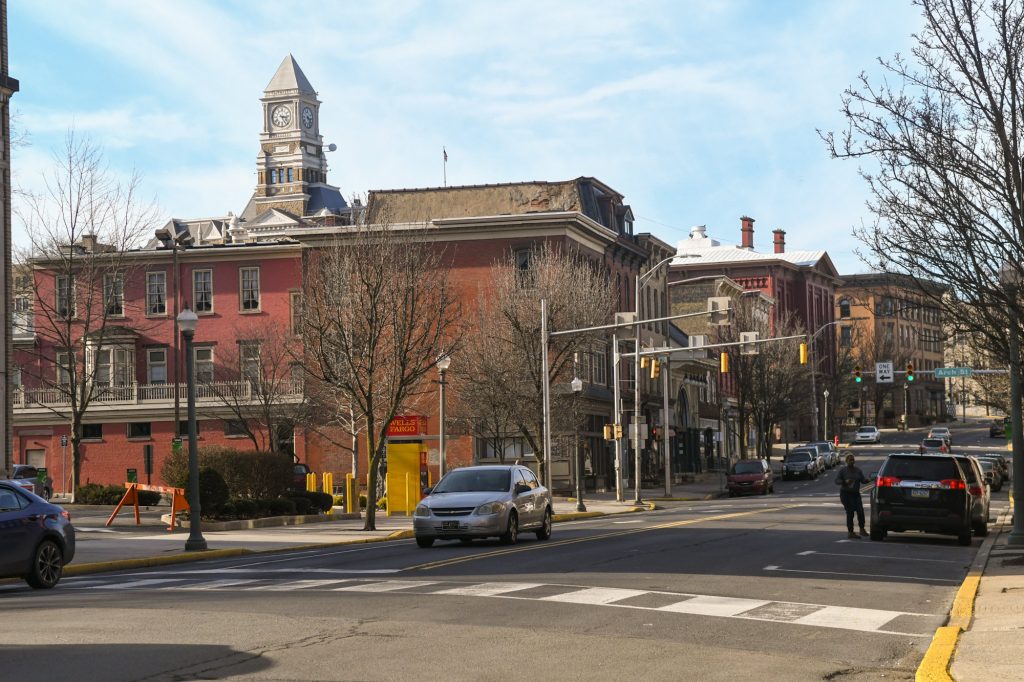 Does Pottsville deserve a makeover from the Home and Garden network? A few Schuylkill County natives thinks so.

John Bushar, owner of Four Cat Media, Pottsville, created a video showcasing the city for a new HGTV show, “Home Town Takeover.” It was created as part of a nationwide contest the network held to find a town in need of a renovation.

The video details Pottsville’s history, from the discovery of a coal seam by hunter Necho Allen in 1790; the city’s founding in 1806; its establishment as the county seat in 1850; a visit by President John F. Kennedy to Garfield Square in 1960 during his run for president; and the city’s downturn as the coal industry dissolved. It features aerial drone footage of the Schuylkill County Courthouse, Yuengling brewery and Centre Street as “Waltz of the Flowers” by Pyotr Ilyich Tchaikovsky from “The Nutcracker” plays. The Branch Township resident provides narration.

It also features footage of Victorian-era homes along Mahantongo Street and the six-story Thompson Building on Centre and Market streets.

It closes with Bushar telling the network that “we hope this video helps you see the sense of community this area has and gets you interested in helping give us a much-needed makeover.”

The network launched the contest in January. Residents of towns with under 40,000 residents were eligible to apply before Feb. 4. Applicants could submit materials online, including video, showcasing why their town deserves to be on the show.

They were encouraged to highlight aspects of the town that makes it special, such as architecture, local landmarks or a main street.

The new show is a spinoff of the HGTV show “Home Town,” which features hosts Ben and Erin Napier renovating houses in their hometown of Laurel, Mississippi. That show has aired on HGTV since March 2017.

Jennifer Reiner, Palo Alto, came up with the idea to have Pottsville featured on the show after seeing an article online last month.

She saw the criteria and felt the city fit the mold of what the show is looking for.

“Downtown Pottsville is just beautiful, but there’s a few buildings that could use an upgrade,” said Reiner, an author of several cookbooks.

To assist with the project, she contacted Harold Aurand, a history professor at Penn State Schuylkill, and Marie Lutkus, a volunteer at the Schuylkill County Historical Society. Reiner’s friend, Dr. Robert Kimmel, suggested Bushar as a videographer for the project. Aurand wrote the script for the video.

Bushar, a licensed drone pilot, was contacted by Reiner on Jan. 24 about the project and shot footage earlier this month.

As of Monday, the video has received over 6,000 views on YouTube, something Bushar is surprised about.

“The intention was just to submit it to a contest,” he said.

But when he shared it in the Facebook group “Old Downtown Pottsville: Schuylkill County: Frankie’s Smoke Shop,” the number of views it received skyrocketed, Bushar said.

Reiner said as a lifelong county resident, the area has a “rich history and culture” with a number of attractions, including Yuengling brewery, that can attract people to the area.

“A project like this would hopefully bring more businesses downtown and make the area more inviting for tourists and residents,” she said.

“That’s a relatable thing that people watching TV nationally,” he said. “That would help give us visibility.”

He added that Pottsville has a historical legacy that needs to be kept alive. Its residents also have positive attributes.

“We’re a close-knit community. We all have the same heritage and it’s generally a town of kind people,” Bushar said.

Creating the video, he said, has peaked his interest in Pottsville history. Bushar said he plans to work with the county historical society on a longer, more in-depth video detailing Pottsville’s history.

“Home Town Takeover” will air as a six-episode special in 2021.