The Wilkes-Barre staple was a frequent stop for Dupont native Pat Patte, who used to visit the bar to watch Yankees games. When the previous owner decided to put the business on the market, the regular saw an opportunity to take over a place he already loved.

“When I found out it was for sale, I begged, borrowed and got enough to buy it,” Patte said. “In the beginning, he had a nice little share of local business because it’s a neighborhood bar. (When I bought it), I tried to go with the flow. I started small, kept adding on, adding on, and a couple years afterward started calling it a sports bar because all the coaches were coming in.”

A few years after taking on the business, Patte bought the building next door to his West Hollenback Avenue location and turned it into an additional dining room. Later on, he added a yard with extra seating for service. Over the years, the menu expanded, too.

“It’s still a sports-bar theme, but with some dinners now,” Patte said.

Longtime employee and manager Annie McCarthy pointed to the comfortable atmosphere and the way everything is made from scratch at Patte’s as the reason it has earned a strong reputation and following, and has been able to expand into catering for all sorts of special events including graduations, Christmas parties and children’s events.

“It’s basically like ‘Cheers.’ One thing you could say here is not much changes, so it’s a lot of the same clientele,” McCarthy said. “I think we have fabulous food that’s not ridiculously priced, and everybody gets to know each other.”

From the bar area with its booths and stools to the various family-friendly dining rooms, there’s no bad seat at Patte’s, which can fit up to 250 overall. And the food is always filling and fresh. 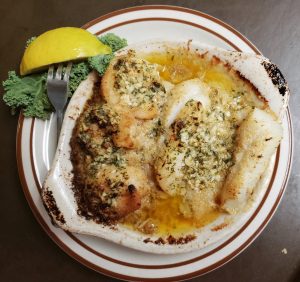 “We have saute dishes that are very good,” McCarthy said, listing the Cavatelli, Calabrese, Francaise and Scampi as her favorites.

“We have larger hoagies on loaves of Italian bread,” she added, with the Fat Pat and the Great Pompino standing out as signature sandwiches.

Many days of the week feature nightly dinner specials, such as pizza and Buffalo Drumsticks on Mondays; steamed Maine clams and Angus burgers on Tuesdays; lobster tails and halves of roasted chickens on Wednesdays; Surf and Turf on Thursdays; and Breaded Haddock on Fridays.

“We have everything,” McCarthy said with a laugh.

During its tenure, Patte’s has welcomed all sorts of recognizable sports figures, from football coaches such as Lou Holtz to players including Bob Pellegrini. Throughout the years, however, it’s the local sports fans and figures and regular people who have made Patte’s a success story. Its owner — and his three sons, who all help out part-time in addition to having their own professions — remain glad to welcome them back.

“At homecoming, I get a visit from everybody. They all come back to see me,” Patte said. “It’s (become) a stopping place. It’s unbelievable, the camaraderie here.”

Trio of new releases make for an entertaining listen
Adams brings unique experience, progressive outlook to RailRiders...and he needs to.
Plenty of options for winter fun
Quiz: How well do you know 'The Office'?