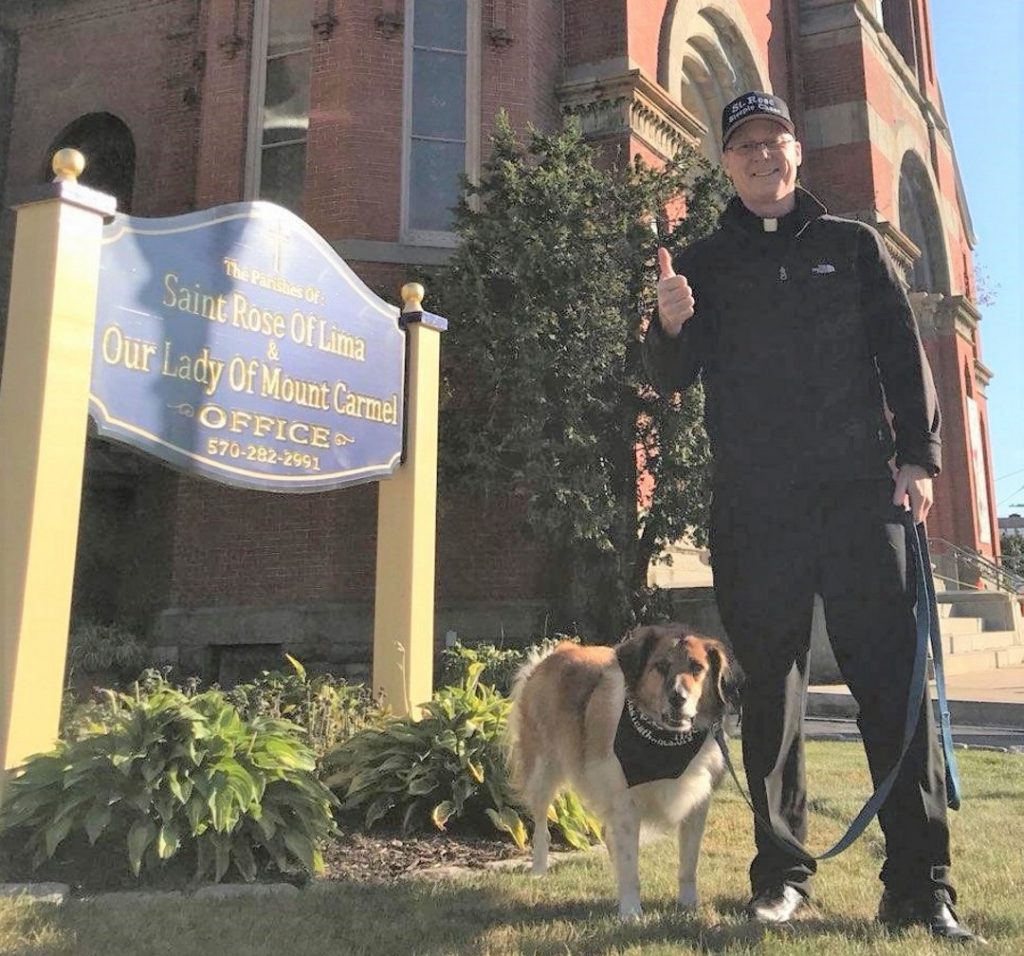 Pastor completing his own Steamtown Marathon to raise money for church

He’s seeking sponsors to pledge at least $1 for each of the 26.2-mile-long course to raise money for the historic church’s major renovation project. He’s calling the project “The St. Rose Steeple Chase,” drawing inspiration from an old Celtic tradition.

“I looked into the history of it,” said Walsh. “They would have races and the only thing that you would have as a visual were the steeples of churches.”

Walsh became the official pastor of St. Rose on July 1, but this isn’t his first time there. From 1994 to 1996, he was stationed at St. Rose just after he was ordained. The pastor is known for his community spirit.

“He’s fantastic, he’s everything you’d think a man of the cloth should be,” said Michele Bannon, a lifelong parishioner of St. Rose and a member of its Capital Campaign. “He loves to immerse himself into the community.”

In addition to being active in the community, Walsh is also physically active. He’s participated in six Steamtown Marathons since 1998. In 2001, he also ran the Boston Marathon.

Even though his last marathon was in 2005, Walsh thinks he’s ready for Sunday’s unusual solo fundraiser.

So far, St. Rose Restoration project has raised about $703,000 of their $850,000 goal, according to the project’s website. Built in 1832, the city landmark needs repairs to the steeple, façade and steps, which will be modified to improve handicap accessibility.

Repairs on the church’s steps are set to begin this fall, with construction on the façade and steeple beginning in the spring.

“I’m always amazed and grateful and just awed by the way this community steps forward,” said Bannon. “If there’s a need this community always rises to the occasion.”

Although Walsh won’t be surrounded by thousands of other runners making their way from Forest City to Scranton Sunday, he won’t be alone, either. For the last 10 miles of his walk, his terrier mix, Sam, will be joining him.

Walsh plans to begin his journey at around 9 a.m., after his 7:30 Mass. Throughout the journey, he plans to keep his parishioners updated on Facebook. He believes that the course will take him around seven or eight hours to complete.

“I’m going to do a ‘Where’s Waldo’ type of thing on the day of the walk. I’m going to take pictures every 15 minutes or half hour and just say ‘guess where I’m at,’” said Walsh.

He hopes the walk will be a way of both honoring the marathon and supporting a good cause.

“I thought if anything, I can at least try to keep it out there in somebody’s mind … that the Steamtown Marathon is sadly not being run, but there’s a crazy priest and his dog out there walking the course,” said Walsh.