The Pallman family has grown a legacy right along with the strawberries and turkeys for which it’s known.

For five generations, Pallman men and women have farmed land in the Abingtons. The boundaries and acreage have fluctuated through the years, but today the family’s property on Summit Lake Road, just off the Morgan Highway, makes it a visible and integral part of the community.

The family traces its agricultural history to Willard “W.E.” Pallman, whose farm once extended further up around the Morgan Highway, around where MetLife exists today. His son, C.M. Pallman, took over, followed by his son, Dutch.

Today, Dutch’s descendants look to him as the man who really shaped the family’s place in local agriculture. Dutch and his wife, Leona, raised three sons and a daughter in the white farmhouse that still stands at the farm today. The boys — Richard and twins Bruce and Brian — continued with the farm, and Bruce’s son Craig and Brian’s son Douglas took over Pallman Farms a few years ago.

“The adage goes, ‘Once you get that dirt under your fingernails, you can never get it out,’” Craig said. “We grew up on the farm. There’s a certain level of satisfaction of being self-employed, as challenging as it can be.” 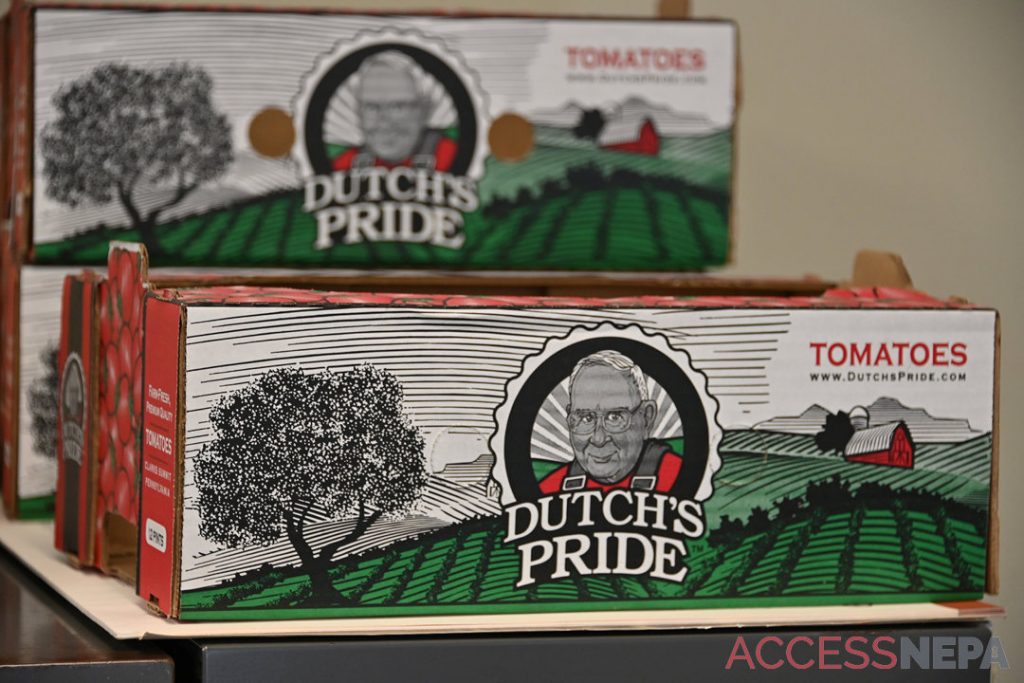 JASON FARMER / STAFF PHOTOGRAPHER
Dutch Pallman’s memory fills the farmland and offices, including his image looking down on the boxes of tomatoes his grandsons named after him.

Dutch’s memory fills the farmland and offices, his image looking down on his descendants from the wall and the boxes of tomatoes his grandsons named after him.

Dutch didn’t have a great childhood, his sons said; he came from a broken home, and his mother received some of the present-day farmland in her divorce. But Dutch created the dynamic of the fresh turkey sales, Craig said, set the business on a successful course and served as an example. He taught them to be honest, to pay their bills and to “tell it like it is,” Bruce said.

“Dad said, ‘Let me know if you’re in trouble,’” Bruce said. “He was always looking out for us.”

Craig said he “grew up in a vast network of cousins,” who fill his memories of childhood at the farm. They worked side-by-side, and being surrounded by family every day made the job more fun, he added. They forged relationships with their fathers and learned how farms function.

“As soon as the last day of school was out, we were working 70, 80, sometimes 90 hours a week,” Craig said. “We didn’t have summer vacations, so to speak of, but I look back now, and I wouldn’t trade that for anything in the world.”

While Doug and Craig helped on the farm growing up, they didn’t head straight for the fields after high school. Each went to college and worked outside the farm before coming together to form Summit Harvest Inc., a year-round produce packing and distribution company that deals mostly with tomatoes but also some seasonal vegetables. That endeavor would not have had the strong foundation it did without their dads’ support, Doug said, from letting them lease the old tomato warehouse to signing loans.

Forming the company and running it off Pallman Farms land not only gave the cousins a chance to stay and raise their families in Clarks Summit but also put them in a position to take over the farm when their dads were ready to step aside, Craig said.

He knew it would have been hard for him to not see the family farm continue on.

“I think that there was a desire for me to maintain that legacy,” Craig said. “(I knew) that I could probably choose much easier paths than this but didn’t want to see it fall to the wayside.”

Doug and Craig eventually bought out their uncle Richard’s share of the farm and officially took over Pallman’s in 2015, although their dads, who turned 70 this year, still help out.

“Both of our fathers are still extremely active on the farm on a daily basis but are taking a different role at their age and trying to do what they want to do instead of what they have to do, which was our ultimate goal when the succession plan went into place,” Craig said. “We were trying to preserve the farm and maintain the family business. … They have probably forgotten more about agriculture than we would ever know, so they are a great resource to have at our disposal.”

The twins never put any pressure on their sons to take over the farm, but Bruce said it has been rewarding that they did continue on. 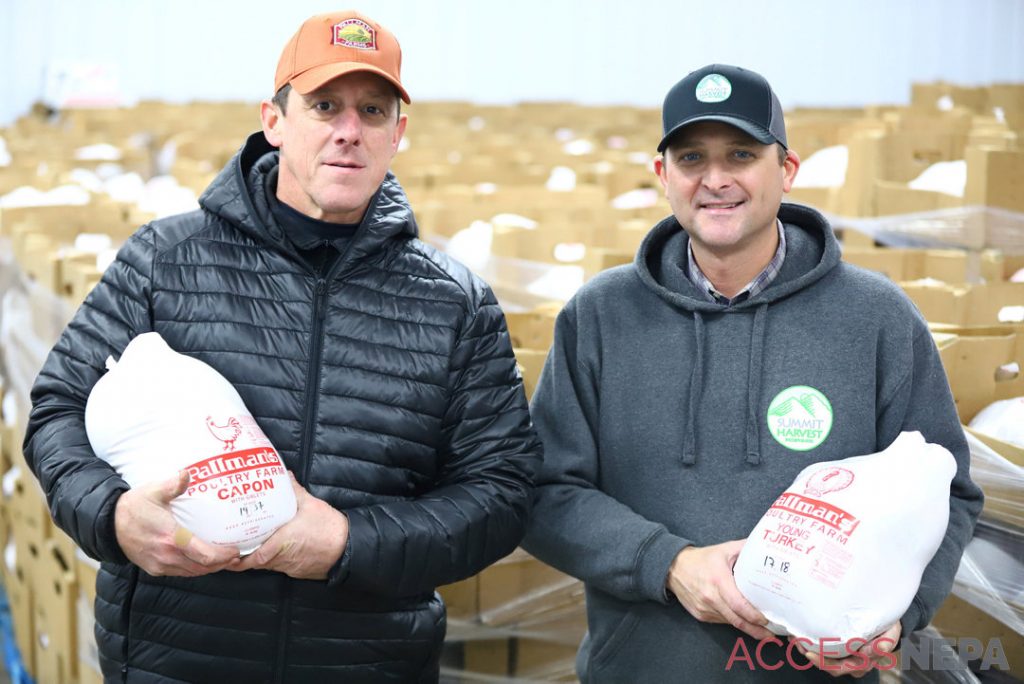 For many years until 1999, the Pallmans grew and harvested green tomatoes in addition to poultry. As markets changed, however, they dropped the tomatoes and moved to focusing on poultry and strawberries.

As the world changed, the Pallmans adapted. They lost land, added land and erected buildings. They moved from raising hens for eggs to processing many of their earliest turkeys in the farmhouse kitchen. They went from delivering poultry orders door-to-door to online ordering. They planted cabbages then tomatoes then strawberries.

The Pallmans also watched as people have become more vigilant about where their food comes from, which Craig knows affects how customers shop. That mindset benefits a farm like theirs, which sells directly to customers who go away knowing how fresh their food is. The Pallmans bill their turkeys as “fresh and never frozen.”

“(For Thanksgiving) they’re sourcing the centerpiece for that meal from a local farm — a local family farm,” Craig said. “I just think that it resonates with the customer. It’s kind of symbolic, like going for the Christmas tree at Christmastime.”

And after fielding questions from consumers in previous years, the twins noted, the Pallmans will raise their turkeys more naturally starting this year, without any antibiotics. The farm welcomed its first shipment of turkeys this month, birds that, by the time Thanksgiving rolls around, will weigh upwards of 40 to 50 pounds.

As generations of Pallmans have served customers, generations of customers have come to them for their food. Even people who have moved out of the area will either return to pick up a turkey or have the Pallmans ship it.

“The biggest thing for us is that I hope they understand that the satisfaction we get out of seeing them come to the farm and walk off from the farm with something they can’t get anywhere else is what keeps us going,” Craig said. “We really pride ourselves on being at the centerpiece of that Thanksgiving dinner table.” 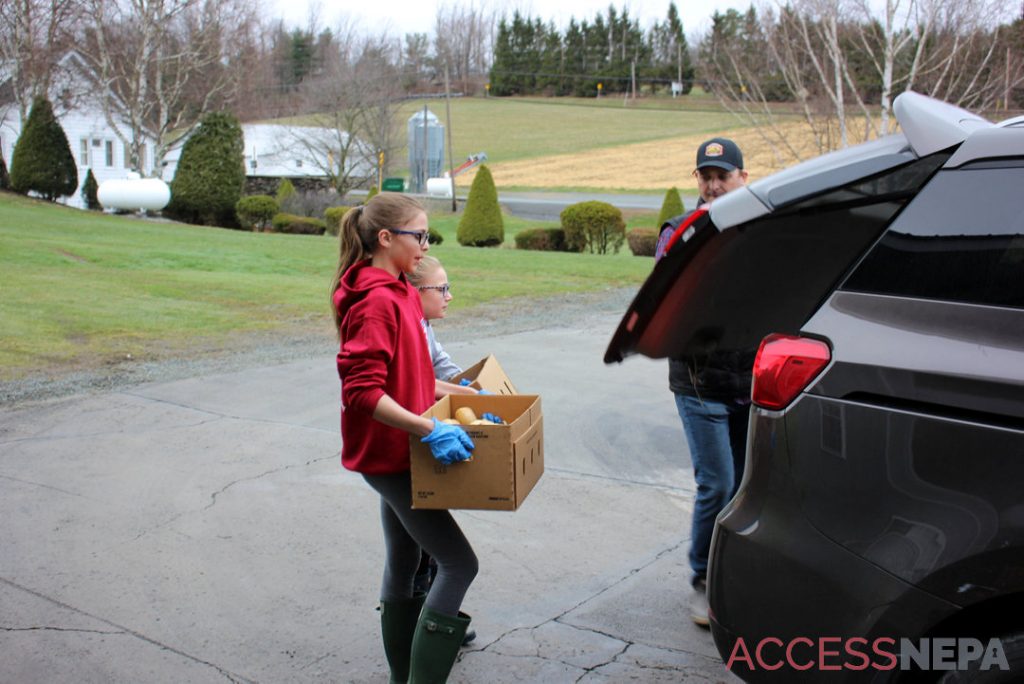 ACCESS NEPA FILE
Pallman sisters Harper, 12, and Hadley, 9, carry boxes of fresh produce to vehicles during a day of donations to the community earlier this year.

Craig and Douglas have seven daughters between them, and although the oldest members of the sixth generation are only in their early teens, they’ve already started to help out in the family business where they can, particularly on the retail side of strawberry season and on the poultry pickup days.

“They do understand the demands of raising livestock and knowing that it’s not Monday through Friday, 8 to 5, during that growing season,” Craig said. “It’s seven days a week.”

Whether that sixth generation takes over one day, the elder Pallmans can’t say just yet.

“I see a lot of potential in all of them from different aspects. … We would never deter them,” Craig said. “They see the good, the bad and the ugly. It’s so early to tell, but I would tell you this much: we would certainly offer them the same opportunity that our fathers and our grandfather did.”

Running and working in a family businesses requires juggling different challenges than other companies do, from emotions to varying viewpoints. As a kid, Doug said, he saw how the older generations “always figured out a way to work through adversity to come out better.”

“They’ve always been able to manage to work together in a very close environment and be able to check emotions and … they’ve always put the business right alongside the family,” Doug said.

And the greatest experience for Doug has been working alongside his dad and uncles practically every day from an early age.

“I look back on it now, and there is absolutely no way I’d be the person I am today and doing what I am doing now if it wasn’t for that upbringing and work ethic,” Doug said. “For me, there’s no question that that’s where I got my work ethic — it’s certainly from my uncles, my grandfather and my father.”

Their dads also taught them about integrity, respect and doing the right thing, even if it brings in a lesser return, the cousins explained. Craig feels proud the farm could continue.

“When you take a look at the way that the landscape has changed and development and real estate taking over a lot of farmland, I think it’s rewarding for us to know that we’re still making it work,” he said.

“We have all the faith in what Doug and Craig are doing,” Bruce said.

Dutch was proud of his grandsons, too, Bruce said, and in the early days of Doug and Craig running their businesses, Dutch would come down to the office and just sit there for hours, listening to what his grandsons were doing and offering occasional advice.

Of all their ancestors, Craig said, Dutch probably would have been the most excited about what the farm has become.

“My grandfather was a family man first and a businessman second his whole life,” Craig said. “He is definitely looking down on this and has a smile on his face to see what’s taken place.” 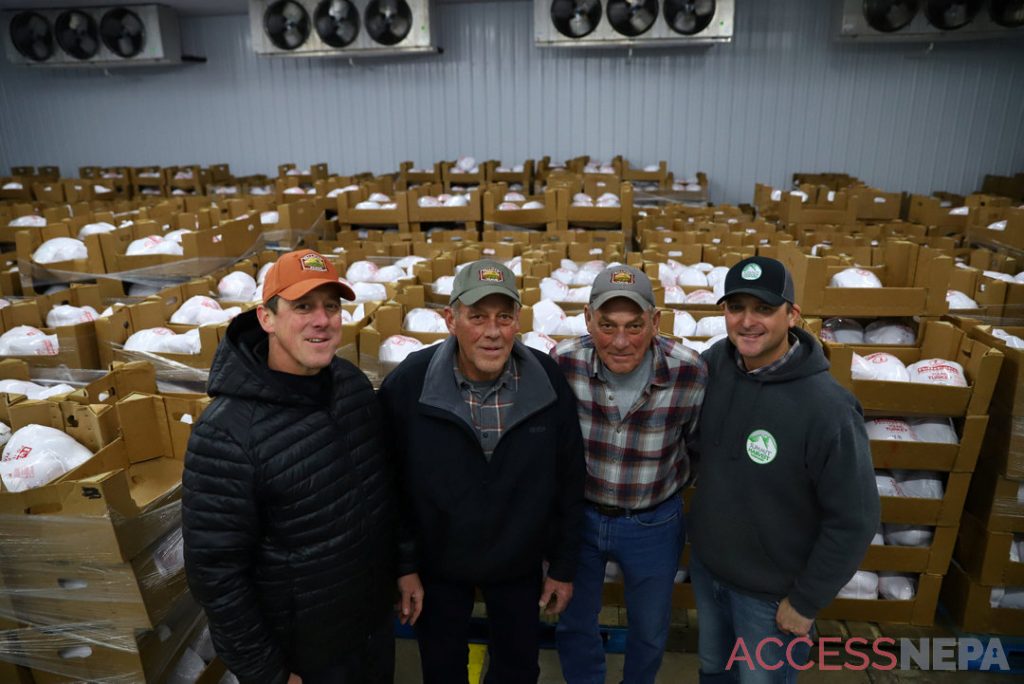