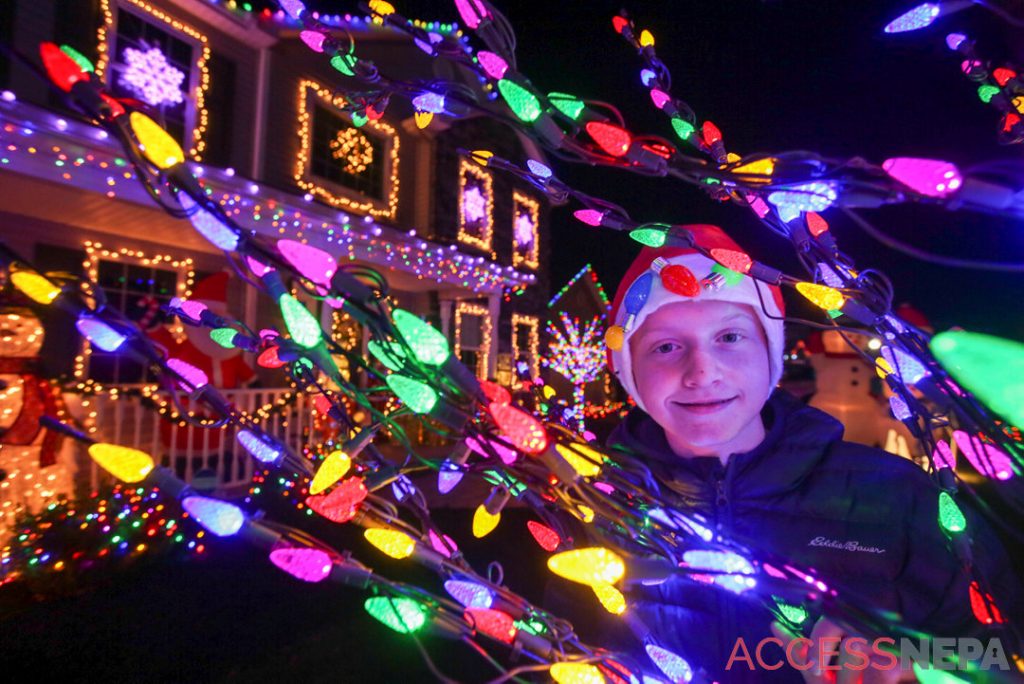 Justin Osman gave the gift of joy to his mom in more ways than one.

Thanks to the Mid Valley eighth-grader’s ingenuity and handiness, the roof of his family’s home at 179 W. Acorn Hill Drive, Olyphant, has a new decoration: a lighted sign spelling out “Joy” that he crafted himself.

Justin, 13, had seen similar signs on other homes in their neighborhood, Acorn Hill Estates, and he and his mom, Andrea, had always wanted one for theirs. So Justin gathered wires, tinsel and lights — the latter from the family’s Christmas tree — and set to work to make one, which he gave his mom for Christmas last year. Andrea recalled how her son had worked on the project in his room, covering the shaped letters with a big sheet to keep them a surprise.

“I’m like, ‘Wow that’s going to be some gift,’” Andrea said with a laugh. “I was really blown away. He had done a craft in his art class at school with crafting wire, (and) he just got the idea. He made it completely by himself with just things in the house. It just really meant so much to me.”

The sign, however, is just one part of the Osmans’ elaborate outdoor Christmas display, which includes lights across most of the home and lawn plus blow-ups, window decorations and lighted figures. The Osmans moved to the home in 2014 and started small when it came to decorating for Christmas, said Justin’s dad, Jeff.

“It’s just grown a little bit every year,” Jeff said. “The past couple years has definitely been bigger.”

While the display includes many newer pieces, Justin’s grandmother, Julie Lisko, gave them a couple decorations, include a tinsel Snoopy.

“It’s the oldest decoration, so it’s special to me,” Justin said. “I like putting it front and center every year.”

Jeff and Justin started to decorate around Halloween this year, which was earlier than usual, but Jeff noted they “wanted to do something extra big” because of how tough 2020 has been. They come up with a plan by drawing the house and then going outside to envision what it will look like.

Andrea — known as the supply person in the family, getting the guys what they need — called Justin “a big idea guy.”

“He really looks at the yard and says, ‘I really think this would look good here,’” she said. “And we kind of let him do whatever he wants.” 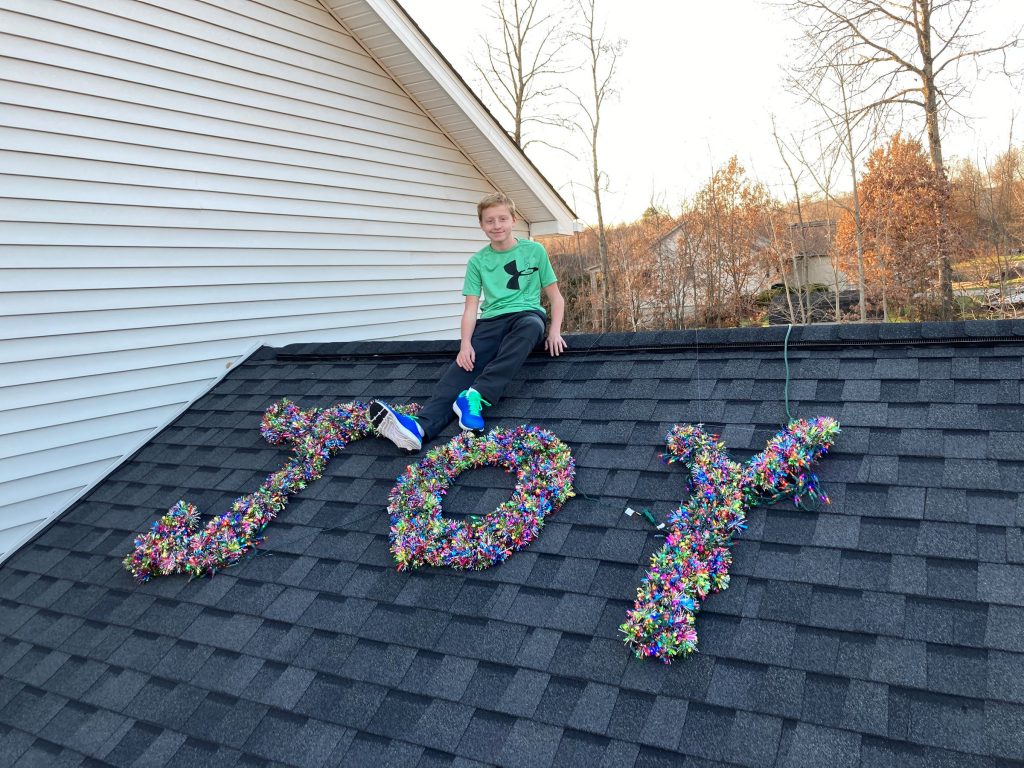 SUBMITTED PHOTO Thirteen-year-old Justin Osman crafted a “Joy” sign as a gift for his mother last Christmas. This year, it adorns the roof of their Olyphant home.

Then they follow a color-coded map to set up everything, which this year took about 18 hours spread over three weekends. They turned on the lights the weekend before Thanksgiving.

Justin recalled how he and his family would drive around looking at Christmas lights every year, which inspired him to decorate his home. He enjoys working on the project with his dad and particularly enjoyed getting to go up on the garage roof this year. He loves “seeing the grand results” and watching people slow down as they drive by to get a better look.

“Sometimes people will stop and take a photo,” Andrea said.

Justin has even dressed up as Santa sometimes, waving at people as they pass.

While she wouldn’t normally put out this many lights, Andrea said, if this is something her son wants to do as a teenager, then as a mom, she will support it.

“He could be in here playing video games, but he’s outside talking to neighbors and spending hours working on something for people to enjoy,” she said.

The display features a mix of incandescent bulbs and LEDs, plus color-changing lights that the Osmans can control with a remote. It also has little themes, such as a group of Star Wars characters gathered together.

Getting the lights on the roof is one of the harder parts, so Jeff handles that, with Justin holding onto the ladder. Having this special time with his son means a lot to Jeff.

“It makes me happy that the both of us are outside together and we’re doing something constructive,” he said. 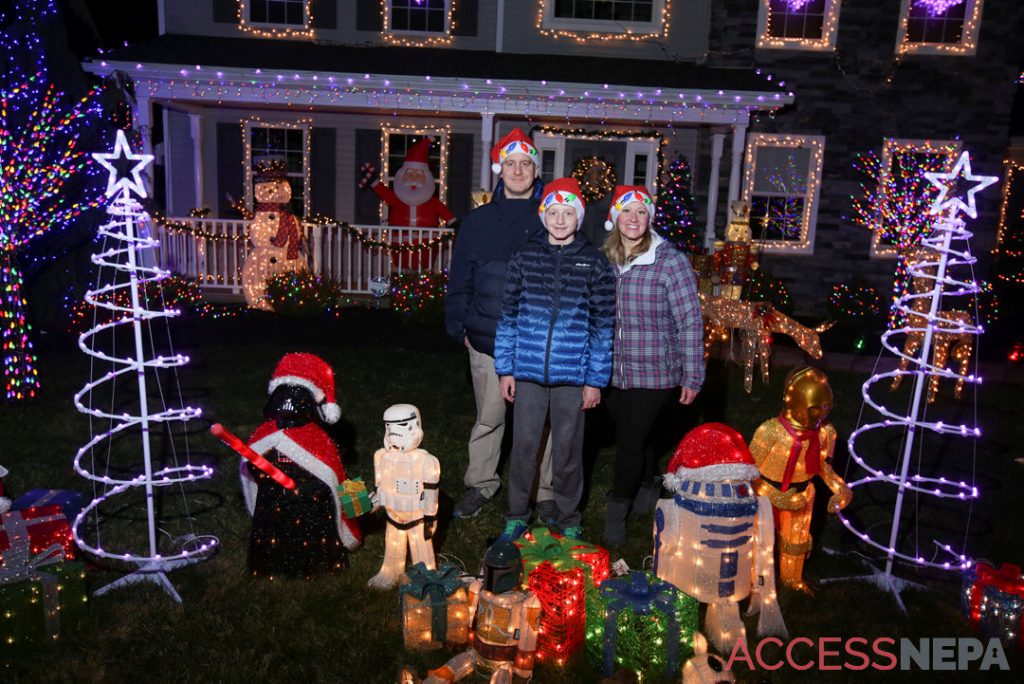 The Osmans aren’t the only ones in their community who go all-out for Christmas. Many of their neighbors also have extensive Christmas light displays, some of which The Times-Tribune highlighted as part of its annual 12 Days of Christmas Lights feature in 2019 and this year. Justin even wrote an article about the neighborhood for his school paper.

“I think it’s like a winter wonderland (and) kind of just brings out the joy of Christmas,” Justin said.

Some of their neighbors also try to go bigger and better every year, too, Jeff said. Justin believes the milder weather in November and the need for some holiday cheer this year encouraged people to decorate maybe more than usual. And even in a pandemic, people can still set up displays and drive around to look at Christmas lights, Andrea said.

“I think just the warmth and glow of the lights just helps people get in a jollier mood,” she said. “It’s an activity that families can do this year. With so many activities being canceled and so many normal traditions that can’t happened this year, (this) can still be done given all the restrictions.”

And next year, expect some more decorations from the Osmans, thanks in large part to Justin, who already has plans he’s not ready to divulge.

“He’s always had a really good heart and enjoyed decorating for Christmas and doing fun things for family members,” Andrea said. “We just do our best to encourage it.”