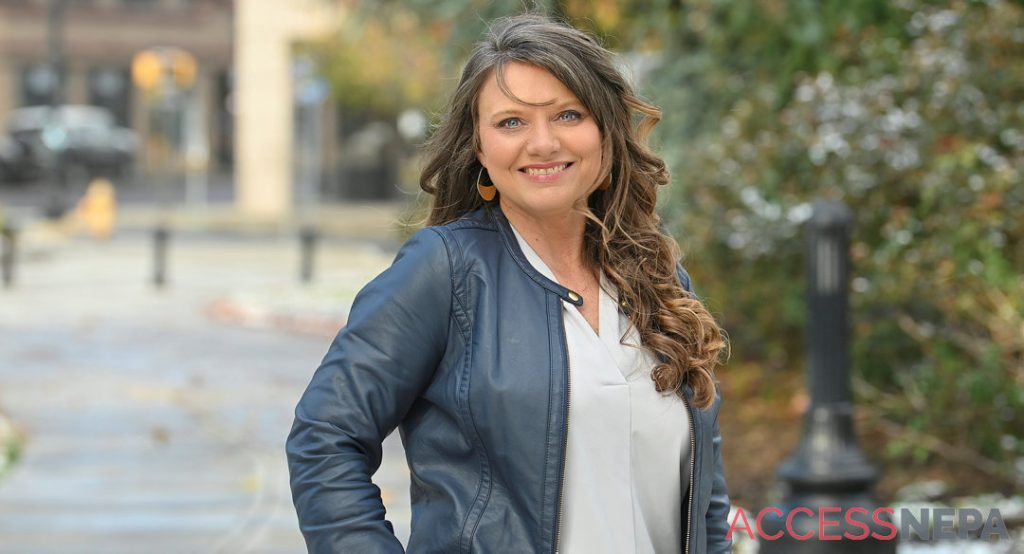 Melissa Swire serves on the front line in looking out for Pennsylvania’s veteran population.

The Noxen resident has spent many years caring for her husband, Jeff, an Army sergeant who was wounded in Iraq, but her desire to help veterans has extended beyond their home. Swire co-founded Patriots Cove, an outdoors-focused spot that serves veterans and offers respite care to caregivers, and recently was named an Elizabeth Dole Fellow for Pennsylvania.

The fellowship involves serving as a community organizer and advocate for people like her who care for veterans. The Elizabeth Dole Foundation trains the fellows to share their experiences with leaders and agencies in government and the private sector.

“It is truly one of the greatest honors of my life to be able to share information about the foundation with other caregivers and give them the things that I wish I had as a new caregiver,” Swire said. “We are a true family. We support and love one another, and I hope to bring that same love and support to our community right here in Pennsylvania.”

Swire learned of the Elizabeth Dole Foundation from Facebook while adapting to her role as a caregiver. Jeff Swire had served in the military for more than 20 years before his injury and even underwent surgery so he could continue to serve. Doctors at Walter Reed National Military Medical Center inserted a metal bracket into his neck and spine to give him mobility in 2009, his wife said, but “that bracket actually caused his body to go into sepsis poisoning.”

Jeff Swire’s condition went undiscovered until 2014, when he was on so many medications to mask the pain that the Army retired him from service.

“When he took that uniform off, it was like everything just changed,” Melissa Swire said. “He lost his mission and purpose and duty, so (the transition) took a while.”

Swire had to quit her job of 18 years running preschools to take care of her husband full-time and yet still try to become the family’s primary breadwinner.

“(It) was quite a challenge, but I taught myself how to sew and embroider, and I opened up an Etsy shop. And that became very successful by the grace of God,” she said. “I was making more than my income at corporate within a year, and I was able to use that business to work from home and use that flexibility to advocate for him and attend his appointments at the (Veterans Affairs facilities).”

Swire, who comes from a military family herself, was determined to help her husband recover from not only his physical wounds but also the emotional ones the drastic change in life caused. She agreed to move their family from Lumberton, North Carolina, to Noxen, where her husband grew up and where his family still lives. That decision had a great effect on his emotional state, leaving him more at peace, but his recovery was far from over.

“Shortly after we got here, he really had a lot of issues with (post-traumatic stress disorder) and depression,” Swire said.

That is when the Swires noticed land near their property was for sale. Her husband always enjoyed outdoor activities, and Swire believed she would feel more secure knowing he could safely engage in them. They bought the property, but from the first minute Jeff Swire stepped on the land, he knew it was meant for another purpose.

“We decided we were going to do something with this. We were going to help veterans,” Melissa Swire said. “So we turned that into our nonprofit, Patriots Cove, and that has just been a phenomenal organization.”

Swire’s desire to help veterans and their caregivers grew out of her own experiences as well as those of her grandmother, Jean Evans, a military wife and a caregiver to her own husband, Sgt. Maj. John Baucom, a Vietnam War veteran. Baucom also suffered from PTSD after the war, but little knowledge about the effects or even the existence of that condition among veterans existed at the time. As a result, Evans had few resources, and Swire’s grandfather ended up addicted to alcohol while trying to cope with his emotional scars. He died when Swire was just 5.

“I do what I do now because, had my grandmother had those resources then, there would have been someone to help her and to help him through that situation,” Swire said.

Swire said that PTSD is a common affliction for veterans, and secondary PTSD is something their caregivers are prone to experience. She encourages new caregivers to reach out to others in their community, since seeking out peers is a great way to find support for themselves and their loved ones as they transition into their new circumstances. Swire had sought to join the Dole Foundation in order to do just that.

“I personally feel that when a veteran enters the VA system, that caregiver should be included from day one,” Swire said. “And that’s what we’re fighting to do within the foundation, is to provide the training and the support that’s needed (for caregivers). We have a campaign for inclusive care to integrate caregivers into the veteran’s care team.

“When (my husband) was transitioning out of the military and into the VA system, there was zero help for me on how to support his physical or emotional challenges,” she added. “Fortunately, I educated myself as much as possible and included myself into his appointments. So bridging that gap with the caregiver and the veteran is vital (as is) acknowledging what the caregivers are doing.”

Swire’s role as a Dole Fellow also enabled her to work with Wyoming County to pass a resolution making the county a Hidden Heroes County, which will bring resources to caregivers in the area. Being able to give new caregivers the things that she wish she had had “means everything,” Swire said.

“The VA does a great job of taking care of (veterans),” Swire said. “However, we’re the front lines. We’re the primary care provider for our veteran, so unless we are educated on how to take care of them, we can help or hinder that care. And before the Dole Foundation, there was nothing for caregivers, there was no support.”

In the midst of her work with veterans and her own family, Swire’s needlework brought her business success: her shop ranked in the top 1% of Etsy vendors. As business struggled recently, though, she pivoted to offering different services, and now works as an online business manager, executive assistant, digital marketing manager and consultant. On her website, melissaswire.com, where she goes by “the Servant-Hearted CEO,” she offers services for executives, entrepreneurs and assistants.

And her commitment to providing opportunities to caregivers extends to her business. She recently launched a course, “Strategic Executive Support for Heart-Centered Entrepreneurs,” to teach caregivers how to be an executive assistant from home. The course is free for military caregivers who can provide proof of service, and those who complete it will receive a certificate.