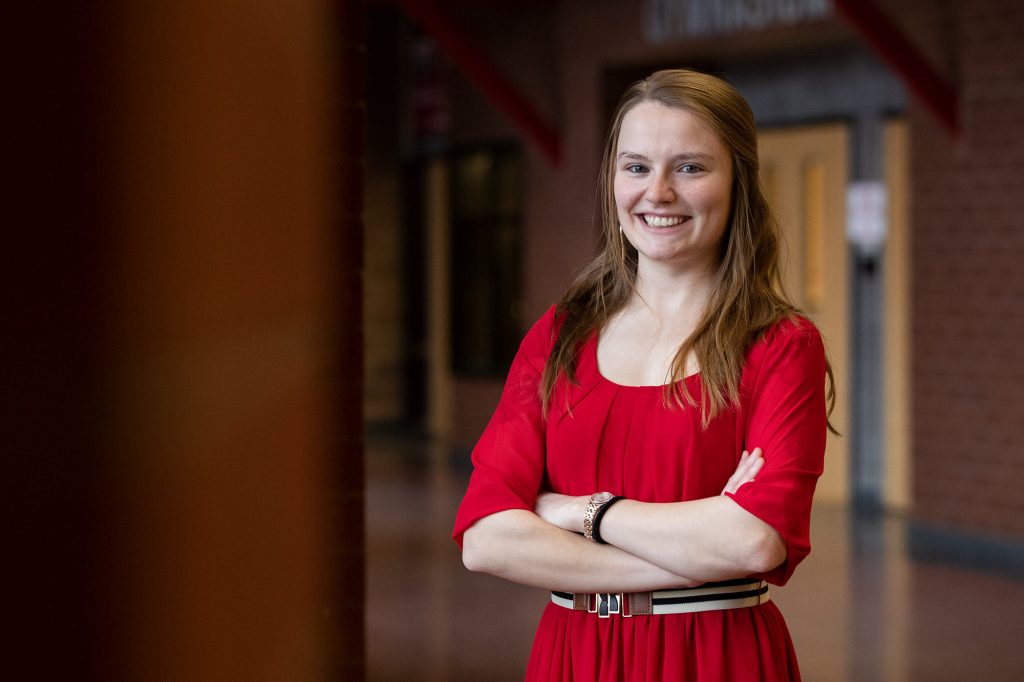 Janelle Decker dreamed as a kid that one day the stars would align and she would lead the band at her alma mater, North Pocono High School.

Unbelievable to her, they did just that.

A 2011 graduate of North Pocono, Decker now is in her third year as band director at the high school, where she took over for longtime teacher Frank Torquato in 2017. While she learned much from her predecessor, Decker has carved her own path as a teacher, guiding more than 100 marching band members and 70 concert band musicians with a well of energy others tend to notice.

“I think my youth is to my advantage and also my experience at North Pocono being part of this program,” Decker said. “I see it in a more youthful way. … I feel like I have a lot of energy, and I really like to push the students. I demand a lot out of them.”

A Roaring Brook Twp. resident, Decker began her musical education as a kid when she began piano lessons around age 8 or 9. Her mother had noticed Decker’s natural musical ability after she caught her making up her own accompaniments for songs she’d learned at SS. Cyril and Methodius Ukrainian Catholic Church in Olyphant. The church’s choir director, noted local musician and family friend, the late Patrick Marcinko, told Decker’s mom to get her kids involved in music in school, too.

“‘If Janelle’s not involved in band in school, her life will be ruined,’” Decker recalled Marcinko saying. “He was exactly 100% correct.”

From there, Decker also picked up the flute and played that up into high school, when as a freshman she heard Torquato lament the upcoming loss of senior percussionists in the marching band.

“I was being a jerk and go, ‘Oh Mr. T, I’ll learn percussion for you,’” Decker said with a laugh, adding that he called her bluff and offered her percussion lessons.

Decker already had been taking private flute and piano lessons but nevertheless added the bass drum into her repertoire. She praised her parents, Herbert and Janice Decker, for their support, recalling how they told her to “learn as many instruments as you can.”
“My parents were so on board,” she said.

From bass drum, Decker moved on to tympani when the then-high school orchestra director, Joseph Serrenti, asked her to pick it up for that group. It turned into her favorite instrument thanks to its versatility and complexity and the empowering feeling it gives her.
“That is the love of my life, are (the) tympani,” she said.

Soon, Decker decided to take her musical skill and passion and make it a career.
“My whole day was involving some kind of music,” she said. “I was like, ‘This is what I want to do, because all the fun I’m having is in music.’ I want to be the next Mr. T.”
Decker went on to earn a bachelor’s degree in music education from Kutztown University and, last year, a master’s degree in music education from Indiana University of Pennsylvania. She spent a year as director of bands and instrumental teacher for grades five to 12 at Crestwood School District before taking up the orchestra director post at North Pocono, where she also worked as assistant band director. When Torquato retired

in 2017, Decker fulfilled her goal by stepping into the position.

“It was seriously the wildest dream to come back here and teach,” she said.

Calling Torquato “a huge pillar of Northeast Pennsylvania and the North Pocono community,” Decker said he taught her millions of things, most importantly “about always making sure you are being the best person you can be” in order to earn others’ respect. She learned much from her other musical mentors from childhood through college, too, and having a background in piano, flute and percussion helps her every day on the job.
Decker knows her own students learn important life lessons through music, such as personal responsibility and accountability.

“When you take a test in another class, it’s just you taking that class for your grade. … It’s not going to affect your other classmates,” Decker said. “But in band, if you can’t play your music well, it affects the entire band.”

In addition to directing the marching, concert and jazz bands, Decker leads the beginning steel drum band, which is open to students with special needs as well as others new to the instrument.

“That’ just such a great class,” she said. “That’s one of the highlights of my day.”
While a lot of school districts struggle with keeping their music programs a top priority, Decker feels “tremendous support … on a daily basis from my administration, my colleagues, my students and their parents.” She gets to give her students daily music lessons and also involve them in a range of community events, from pep rallies to parades and more.

“We just feel so supported and so loved that we’re able to do the things that we do,” Decker said, noting she feels humbled and grateful every day.
And she praised her students, calling them “the nicest, kindest, most good kids in the whole school.”
“I can’t wait to be with them and teach and have experience, good or bad,” Decker said.
Outside school, she indulges her own musical interests by performing with several local groups, including the Scranton Brass Orchestra, Wyoming Seminary Civic Orchestra, a brass group at Elm Park United Methodist Church in Scranton, the Electric City Steel Drum Project and the Reading Pops Orchestra. She also plays timpani and piano for local churches.

When it comes to her career, Decker said, “I could have dreamed it better.” She hopes that when her own retirement comes, she can look back and say she accomplished something similar to Torquato. “It’s not about being the best band director in the world,” Decker said, but rather about the mark she leaves. And Decker hopes music helps her students in all aspects of their lives.

“I just want my students to have all these skills leaving high school and have fond memories of me and of band,” she said.

Meet Janelle Decker
At home: A resident of Roaring Brook Twp., she is the daughter of Herbert and Janice Decker, also of Roaring Brook Twp., and has a brother, Justin, of Virginia.
At work: Band director at North Pocono High School
Inspirations: Highly trained musicians around the world, other conductors and her past mentors, professors and teachers
Aspirations: To be a homeowner in North Pocono School District, to own a red sports car, to pursue a doctorate one day and to play the tympani wherever she can
Diversions: Home improvemtn and interior decorating, watching HGTV and home renovation shows, being a “plant mom” to her tons of houseplants, relaxing with her Chihuahua, ChiChi; visiting her parents; fishing and spending time with her fellow band director friends
Aversions: Rudeness, unkindness and ignorance
Quote: “When in doubt, wear red.” — Bill Blass