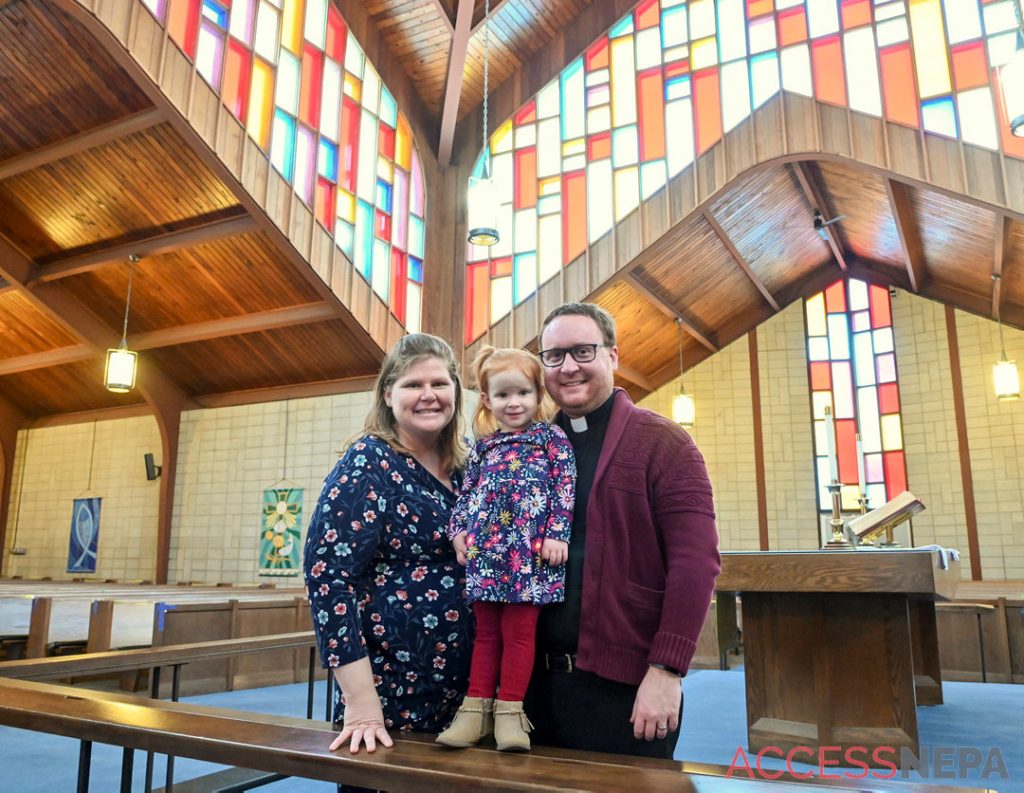 Moving across the state to a new job in an unfamiliar community would be a big task even at the best of times.

Add in a global pandemic, and you have an even more challenging situation.

Luckily for the members of Clarks Summit United Methodist Church, 1310 Morgan Highway, the man they welcomed as their new pastor last summer came ready for the job.

In July, the Rev. John Mackey took over as leader of the Abingtons church after the retirement of the Rev. Andrew Weidner. He’s spent the ensuing months trying to get to know his congregation despite restrictions on gatherings because of the coronavirus and, like many fellow ministers, preaching to an online audience.

“He’s a passionate young man, too,” said Howard Griggs, secretary of the church’s leadership team. “He really wants to do the best he can.”

Originally from Chambersburg, Mackey said he kind of always knew that God was calling him to become a pastor, “but I didn’t quite know what that looked like.” His grandmother and the church he attended as a kid had a strong influence on him, but because of his shyness, Mackey didn’t see himself getting up in front of a congregation and giving sermons.

During his undergraduate studies at Elizabethtown College, however, he took a course that changed his path.

“One of my first courses was biblical Hebrew, and I really kind of got hooked in studying biblical languages and sort of the academic study of the Bible,” Mackey said. “And I thought, ‘OK, God, I got this figured out. You want me to teach.’”

After earning bachelor’s degrees in English literature and religious studies, Mackey earned a master’s degree in religion from Yale Divinity School. He intended to continue on to the doctorate program, but funding issues forced him to reevaluate his plans. Feeling called to pastoral ministry, Mackey spoke with his pastor and decided to head to Wesley Theological Seminary. As he studied for his master’s degree in divinity, he interned at Mount Vernon Place United Methodist Church in Washington, D.C., and “from there answered that call to ministry.”

After serving three churches near Altoona, Mackey learned from the Methodist leadership last year that he would be transferred to Clarks Summit.

“I was excited about the possibilities for ministry here,” he said.

Coming into the new congregation, Mackey hoped to first get to know everyone and then connect them with the community to build relationships.

Mackey noticed the impact of the coronavirus on his ministry early on. He came from the green recovery phase in Blair County to the more restricted Lackawanna County. In the summer, the church could only allow a limited number of people to attend services by reservation, but then it ended up shifting to online-only services.

He also went from preaching to a room full of people to one with just a few congregants to a camera with a remote audience. It involved a bit of a learning curve, but Mackey sees a silver lining in sharing services online.

Other aspects of worship moved online, too, such as Bible study, which takes place over Zoom. Mackey wants to keep people engaged but also take precautions to keep everyone safe — key to following Methodist Church founder John Wesley’s rule about doing no harm.

Griggs believes Mackey “has done a marvelous job under the circumstances,” especially considering the church also missed out on holding its usual yearly activities, such as vacation Bible school and its fall craft show, events that would have allowed for mingling with the public. But Mackey is involved in the church’s prayer and mission teams and also started a discipleship group “for those who seek a closer relationship with Jesus and other Christians,” according to Griggs.

For Christmas Eve, Mackey made sure church members got a package of items typically used in the seasonal service, which Griggs said made the experience of watching from home more meaningful. The church also held a drive-up “blessing of the backpacks” for kids at the start of the school year.

“It may have encouraged some people to feel good about the school year coming up,” Griggs said.

Mackey understands the importance of having people who support you. He made the move to Clarks Summit with his wife, Alison, a special-education teacher for Scranton School District, and 2-year-old daughter, Millie. They have been foster parents and plan to welcome another baby of their own this spring.

“That’s definitely an important support system in my life,” Mackey said. “My wife in particular has always been encouraging and supportive of my ministry and my sort of journey to answering the call to pastoral ministry. Their support has been very important in the move and getting settled and in my ministry.”

Mackey and his wife met at a Christian conference and knew each other for a few years before starting to date. Having religion as a common bond is “an important piece,” Mackey said.

“I think that was part of our connection, because we have that shared faith experience and being in the church, our relationship with God and so forth,” he said.

When the congregation found out that its new pastor was a 32-year-old man with a young family, “we were thrilled,” Griggs said. Young people don’t often seem interested in pursuing ministerial careers, he said, and he sees the value of having such a role model in their midst.

Young people simply might be able to relate to someone closer to their age, he added.

“If you’re a 25-year-old or 30-year-old person, you might look at this young pastor’s picture in the paper and say, ‘Here’s a guy who’s not much older than me. If Christianity is good for him, maybe it’s good for me, too,’” Griggs said.

Mackey might have a little more comfort with technology than his more mature colleagues, he said with a laugh, but he does see some truth in the advantages of being younger pastor.

“Just being a younger person and (having) my experiences, I tend to see possibilities,” Mackey said. “There’s many challenges with the pandemic and congregations and communities, and I tend to see the opportunities that God might be placing before us in our community and our congregation. … (I’m) finding new ways to do some of the same things.”

For younger people considering working as a minister, Mackey encourages them to connect with a pastor or other mentor. Then, he said, they can talk “about how you feel God is leading you and how you can live into that calling that you feel to ministry or pastoral ministry, whatever that might look like.” And they should stay open-minded about how God might want to use them, he added, whether it be traditional pastoral ministry “or maybe another arena altogether.”

Mackey doesn’t know how long he’ll serve Clarks Summit. Methodist leadership makes appointments for a yearly term from July 1 to June 30, so there are no guarantees about where he’ll work come this summer. In the meantime, he continues to get to know his congregation and knows that even if they can’t physically come together right now, they’re still a church.

“I would say this is a congregation that (cares) deeply for one another,” Mackey said. “It gets tossed around somewhat, but I think there is a sense of being a family together and looking out for one another.”