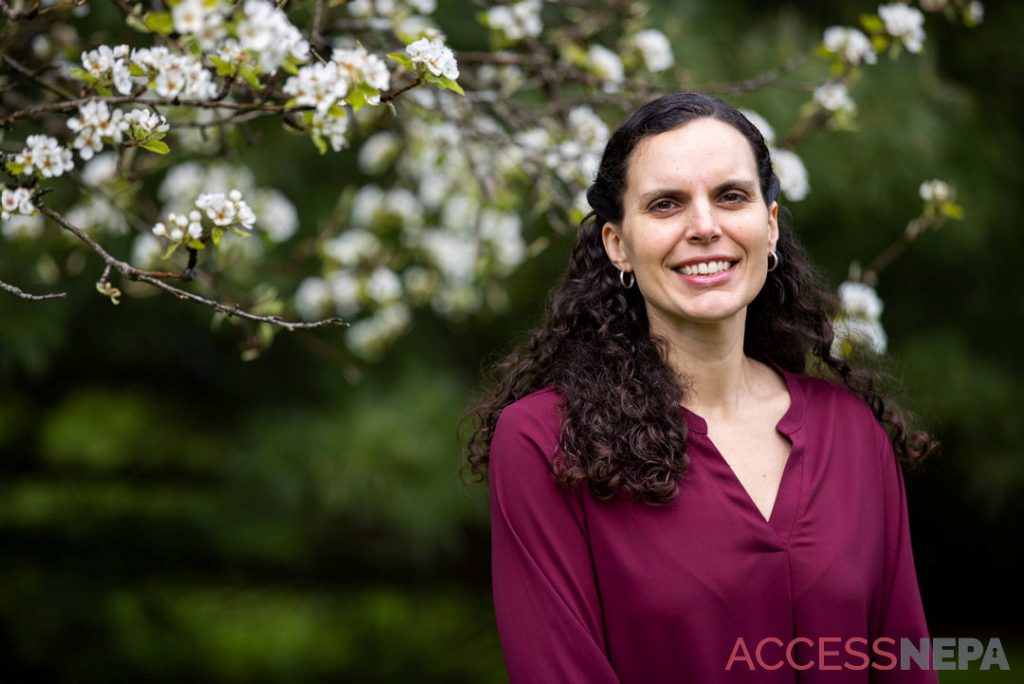 Anna Semon fills her present with the past.

From lab work to field work and other duties in between, the archaeologist and Clarks Summit native helps preserve history for the world through her job at the famed American Museum of Natural History in New York City.

Now living in Manhattan’s Inwood neighborhood, Semon, 41, works as lab director of North American archaeology for the museum, the culmination of many years of education and hard work both inside the lab and out.

“I can’t remember really learning about Native American archaeology or Native American Indians when I was a kid growing up in Pennsylvania,” Semon recalled. “And so I kind of like helping people understand what is in their backyard, what’s in the past of the United States, to give them a better appreciation.”

As a kid, Semon said, she “got drawn into the past,” perusing her subscription to Archaeology magazine and finding herself interested in Old World archaeology. After graduating from Abington Heights High School in 1996, she began what would become decades of advanced study, first earning a bachelor’s of science concentrating on history from Northeastern University and then a master’s degree in social science from University of Chicago. And last year, she earned a doctorate in anthropology focusing on Southeastern archaeology from University of North Carolina at Chapel Hill.

While her bachelor’s degree had focused more on public history and the presentation of history, Semon began to focus more on archaeology during her master’s studies. She wanted to do field work at the time and found more opportunities in the United States than abroad, and so she ended up working at a New Jersey site through Montclair State University.

“It provided the opportunity where I could stay with some relatives and commute to the field site,” Semon said.

Her work there led to a position in cultural resource management with a private-sector firm, a job that can involve visiting sites under development to make sure no historical or cultural resources are harmed.

“The field school helped us get trained in the approaches to do that type of work in archaeology, and so that’s really (where) I really gained a hands-on experience,” Semon said. 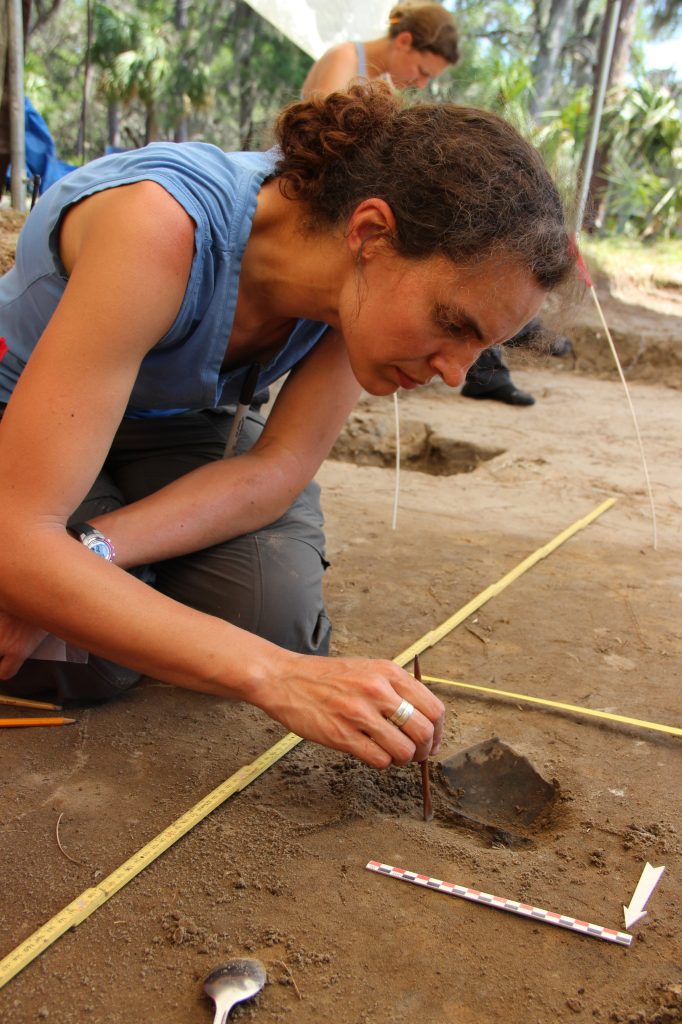 Semon stayed with the firm for about four years and also interned in a lab at the American Museum of Natural History in 2004. The following year, the museum approached her about working as a contractor to help with its field work.

“That’s how I got my foot in the door,” Semon said.

From fall 2005 to fall 2009, she worked full-time at the museum before leaving to begin her doctoral studies. She returned to the museum after four years, working on various projects as she completed her dissertation.

The museum field work took Semon to St. Catherines Island in Georgia, a 23-square-mile plot of land once home to the Guale Indian Nation. The American Museum of Natural History, the St. Catherines Island Foundation and the New York Zoological Society have conducted research there since 1968. Research and collections fromthere proved valuable to Semon’s dissertation, which focused on Native American pottery in the Southeastern United States and primarily on the Georgia coast.

At the museum, Semon has advanced from archivist to transfer specialist to lab supervisor and now to her current position, lab director, which she’s held since fall 2016. She works in the turret on the museum’s west side in what once was the lab of noted cultural anthropologist Margaret Mead.

“It’s pretty awe-inspiring,” Semon said. “The day-in, day-out you kind of do your job, but it’s great … to see other people’s reactions, to be like, ‘Wait, you work where Margaret Mead worked?’ I really enjoy it.”

She and her coworkers visit St. Catherines Island three times a year, and the rest of the time, Semon oversees everything that happens in the lab, from the interns and volunteers to analyzing artifacts. She also helps outside researchers who want to view some of the approximately 270,000 object catalogued in the collection gathered from Canada to the Mexican border, including stone tools, pottery and beads.

“The objects span thousands of years,” Semon said. “We have some objects that are close to 10,000 years old in our collection.”

It’s one thing to see an ancient stone tool in a museum display, but it’s much different to come across them at work and actually handle them. Occasionally, Semon will encounter a piece of pottery with a thumbprint left behind from the potter and visible thousands of years later.

“It’s wonderful to be connected to history that way,” Semon said. “I remember doing some field work in St. Catherines, and we were working on a site that has dated to 5,000 years ago. And (I was) holding a piece of pottery that had survived for 5,000 years in my hand.”

On one of her first excavations on St. Catherines, Semon was working in an ancient “trash pile” when she came across a piece of pottery with an elaborate decoration of concentric circles.

Semon constantly learns something new about the museum’s vast collections as well as the people and cultures of North America’s past. She credits her family, friends and coworkers for their support during her career and is especially grateful to her boss, Dr. David Hurst Thomas, “for his mentoring and providing me countless museum and field opportunities to learn and grow as an archaeologist.”

And while Semon spends a lot of time in the lab, she also mentors the next generation of archaeologists.

“We pride ourselves on our internship program because it provides hands-on experience for students,” she said. 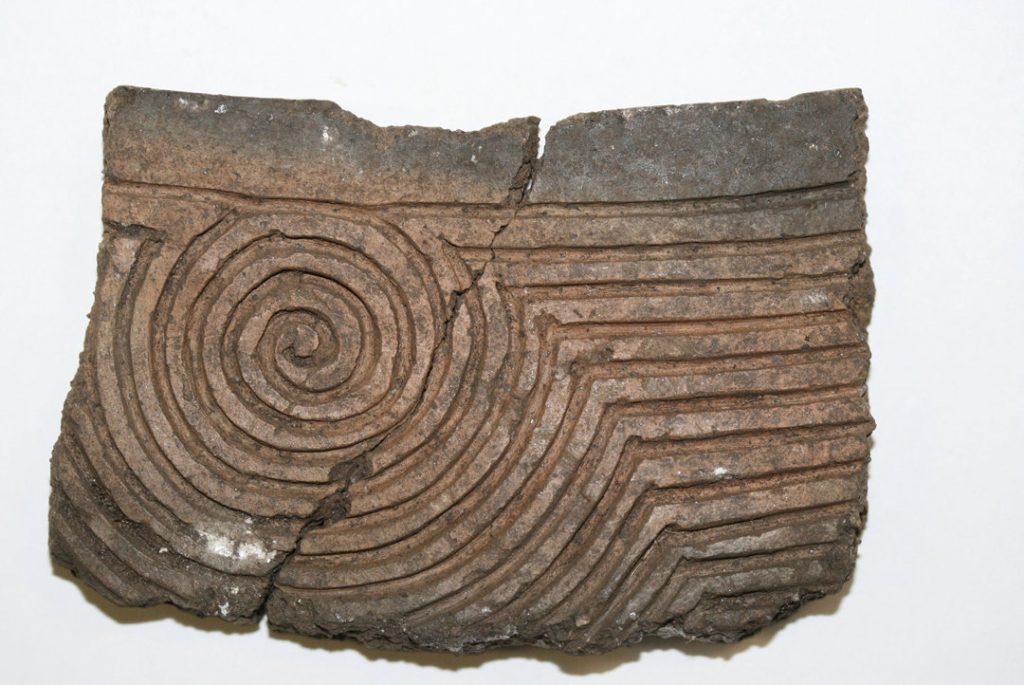 ANNA M. SEMON / CONTRIBUTING PHOTOGRAPHER
Native Americans known as the Guale, who lived on the Georgia coast, made this piece of pottery, identified as Irene Incised, about 500 years ago. Anna Semon’s doctoral dissertation focused on pottery in the Southeastern United States.

In December, TIME for Kids magazine ran a piece on Semon and her work, and she enjoyed getting to talk “about the details of what I do to a younger audience and show them the lab space.” She also works with the museum’s education team to teach high school and middle school students about archaeology and to give lectures.

“It’s fun for me to bring out objects from New York City to explain (to local students) who was living here, how we know they’re living there and how development has changed the city,” Semon said. “Some of them are really excited and ask questions.”

For youth interested in history or archaeology as a career, Semon recommends they take classes in college to learn more about different subjects and determine their interests. And if they can volunteer at a lab in their school or at a museum, that field experience will help too, she noted.

“Yes, I spend most of my time in the lab in New York, but I’ve been fortunate to get outside. … That typical side of it, you need to figure out if you’re interested in that,” Semon said. “Archaeology has a lot of different aspects, so young adults can figure out what path.”

While finding the time to finish all her tasks, from her lab work to fielding research requests to answering questions from the general public, can pose a challenge, Semon loves her position.