Driven by pool closures and the rush of plummeting from cliffs into cool waters, thrill-seekers could increasingly turn out to dangerous, and often illegal, swimming spots throughout the region this summer, experts fear.

In the past two weeks, two people died in the span of five days illegally swimming at spots in Lackawanna and Luzerne counties. A 23-year-old man died after diving into Nay Aug Gorge in Scranton on May 31; a 16-year-old boy died after jumping off a cliff at the Francis E. Walter Dam in Bear Creek Twp. on May 26.

After claiming the lives of at least four dozen people since 1890, the tempting but treacherous Nay Aug Gorge is one of the most dangerous swimming spots in Northeast Pennsylvania, both for swimmers and the first responders who put their lives in peril to save them, said Bill White, rescue captain of Scott Twp.-based Dive Rescue Specialists.

Now, Scranton officials are cracking down on swimmers in the gorge in hopes of saving lives, though it was unclear how, or if, enforcement will change in neighboring counties.

The gorge’s cold waters also can quickly rob swimmers of their strength, said White. On May 31, the water was only 50 degrees, he said. In water that chilly, a person loses 50% of their strength in five minutes, hindering their ability to save themselves, he said. He recalled an incident several decades ago where he struggled to pull himself out of the gorge after a search in cold April waters.

Although it has been years since they were dispatched to Little Rocky Glen in Wyoming County, White compared the rock formation and waterfall to Nay Aug Gorge, explaining the strong currents are dangerous and the rock walls make it difficult to get out.

The last drowning at Little Rocky Glen was in June 2013.

Not far from the gorge, the Dunmore Reservoir’s seclusion means an unmonitored swimming hole with rugged terrain, hindering emergency responses, said borough Fire Chief Chris DeNaples. He estimated about six to eight emergencies at the reservoir in the past decade.

In Luzerne County, Francis E. Walter’s depths of up to 110 feet translate to difficult rescues when teams try to find people who jumped more than 20 feet into the water below.

“When they take chances and go in these areas, we have these types of emergencies,” DeNaples said. 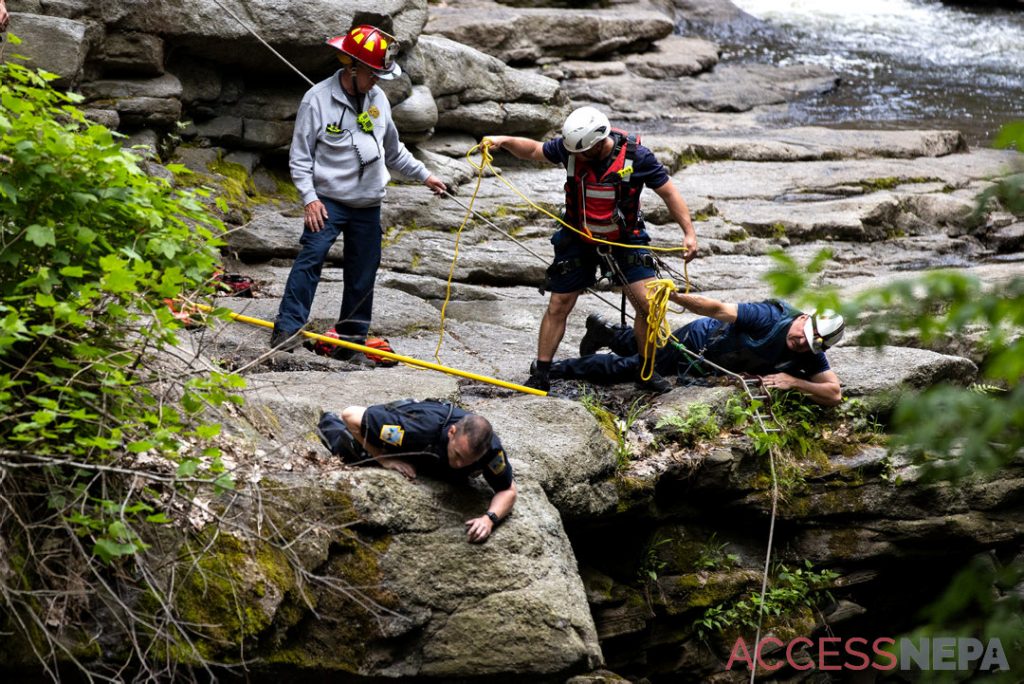 CHRISTOPHER DOLAN / STAFF PHOTOGRAPHER
Scranton firefighters work to recover a victim who died after jumping into Roaring Brook at the Nay Aug gorge on Sunday, May 31, 2020.

To avert injuries and deaths at arguably the region’s most dangerous swimming hole, Scranton Police Chief Carl Graziano said the city is taking a zero-tolerance approach at Nay Aug Gorge.

Workers spent last week installing additional signs around the gorge, so officers now can issue citations in those areas, the chief said. Officers patrol the gorge several times each shift, he said, adding that doing so places officers at risk when they have to remove trespassers.

Long term, city officials are looking to increase fines for anyone caught trespassing, but it is too early to say by how much, Graziano said. Violators now face fines of up to $300. On May 26, city police cited an intoxicated man for swimming in the gorge.

The chief emphasized their goal isn’t to cite people but to keep them safe.

“Hopefully, there aren’t any more injuries or deaths there this year,” he said. “That’s our goal … prevent injury and/or death.”

In August, state troopers arrested 11 teens and young adults for trespassing at Little Rocky Glen, which is owned by Countryside Conservancy, a La Plume Twp.-based conservation group. One person was taken to the hospital after falling into a gorge.

Depending on the trespassing charge, violators can face a fine between $250 and $5,000, with the most serious cases receiving jail time, said Trooper Deanna Piekanski, a public information officer with state police Troop P, which covers Luzerne and Wyoming counties.

“Kids are going to try to play daredevil every day,” he said. “This stuff is going to continue. It’ll never stop. There’s just not enough patrol out there.”

Swimming holes can be tucked away more than a mile into the woods, he said.

“These kids do anything to get off the beaten path so nobody could see them,” Shovlin said. “They think it becomes their own private swimming hole until, unfortunately, someone goes missing or doesn’t come back up.” 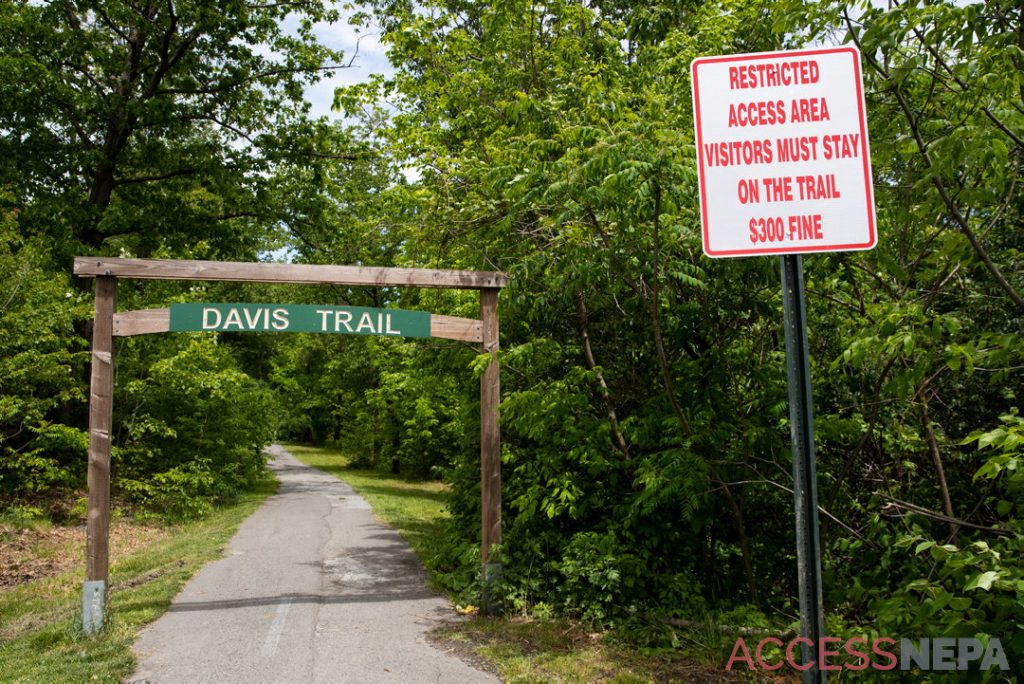 CHRISTOPHER DOLAN / STAFF PHOTOGRAPHER
A new sign posted at the Davis Trail entrance at Nay Aug Park in Scranton warns of a $300 fine for walking off the designated trails targeting illegal swimmers in the Nay Aug Gorge on Thursday, June 4, 2020.

Driving through the region recently, Shovlin said he couldn’t believe the number of vehicles parked at the entrances of known swimming spots.

Germania divers responded to both the Francis E. Walter and Nay Aug drownings.

Officials reported about 100 people at the gorge when the May 31 drowning occurred.
Shovlin believes the lack of open pools will contribute to the problem. Although state park pools soon will reopen, many public pools will remain closed under COVID-19 restrictions.

In Wyoming County, which has both Little Rocky Glen and an abundance of creeks and streams along the Susquehanna River, Eugene Dziak, the county’s Emergency Management Agency director and the Lake Winola fire chief, also predicts an uptick in swimmers placing themselves at risk.

“People are going to be looking for an area to swim that might not be a legal area, or might be a dangerous area,” he said.
In a live-streamed town hall Tuesday, Scranton Mayor Paige Gebhardt Cognetti denounced anyone who swims at the gorge because of pool closures.

“Swimming is not allowed at the gorge, and if there is anyone that thinks, ‘Oh the pool’s closed, I’m going to … swim at the gorge,’ you’ve lost your mind,” she said. “It is so dangerous.”

Lackawanna County’s 911 Center had nine calls for water rescues so far this year, with the May 31 drowning being the first at the gorge, said EMA Director David Hahn. The county’s water rescue log includes calls to assist neighboring counties.

“The hotter the weather is … the more incidents that occur,” he said. 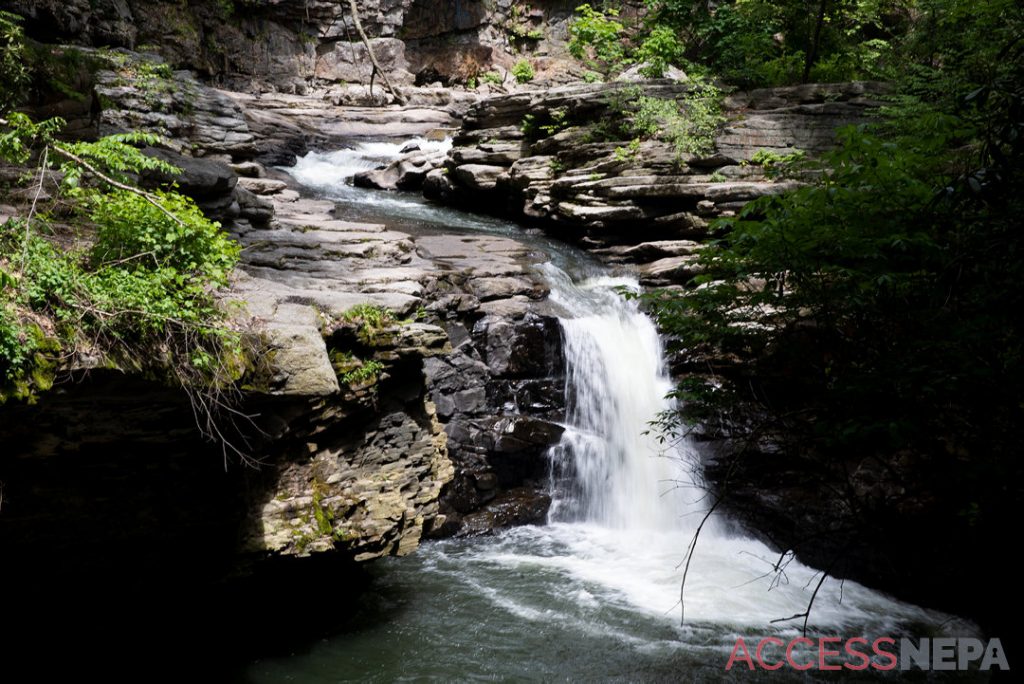 CHRISTOPHER DOLAN / STAFF PHOTOGRAPHER
The Nay Aug gorge has claimed dozens of lives through the years.

In his 28 years with the Scranton Fire Department, Lucas doesn’t remember a year when they didn’t go to Nay Aug Gorge.

“Twenty-eight years we’re constantly up there,” he said. “It never ends well.”

When someone needs to be rescued from the gorge, the city’s Fire Department is the first to respond. They rappel into the gorge, making their way past jagged, loose rocks to the swift waters below.

“All of those things combined — you’re putting the firefighters and first responders in general at absolute risk,” Lucas said.

Diving in a body of water like the gorge is akin to what a firefighter does inside a burning building, said Fred Bales, a diver with Dive Rescue Specialists and a dive trainer for both rescue and recreational divers.

Divers crawl along the bottom of the body of water with zero visibility, sweeping their hands back and forth hoping to feel the victim, he said.

In fast-moving bodies of water, like the gorge, divers are forced to drag themselves along rocks at the bottom because the current is too strong to swim against. All the while, they have to avoid snagging their 70 pounds of equipment on rocks, trees and debris.

At Francis E. Walter, depths drop from 50 feet to 110 feet, increasing the difficulty of finding a victim, Shovlin said.

If a witness can point them in the direction of the victim, they have a good starting point. Otherwise, they use sonar to try to locate a body, he said.

Even jumping off of a two-foot cliff can lead to drowning, Shovlin said. When people injure themselves in a jump, their chance of making it out “isn’t that great,” he said.

“One mistake can take your life away,” he said. “These kids think they’re out for a day of fun. It’s not. It turns tragic.”