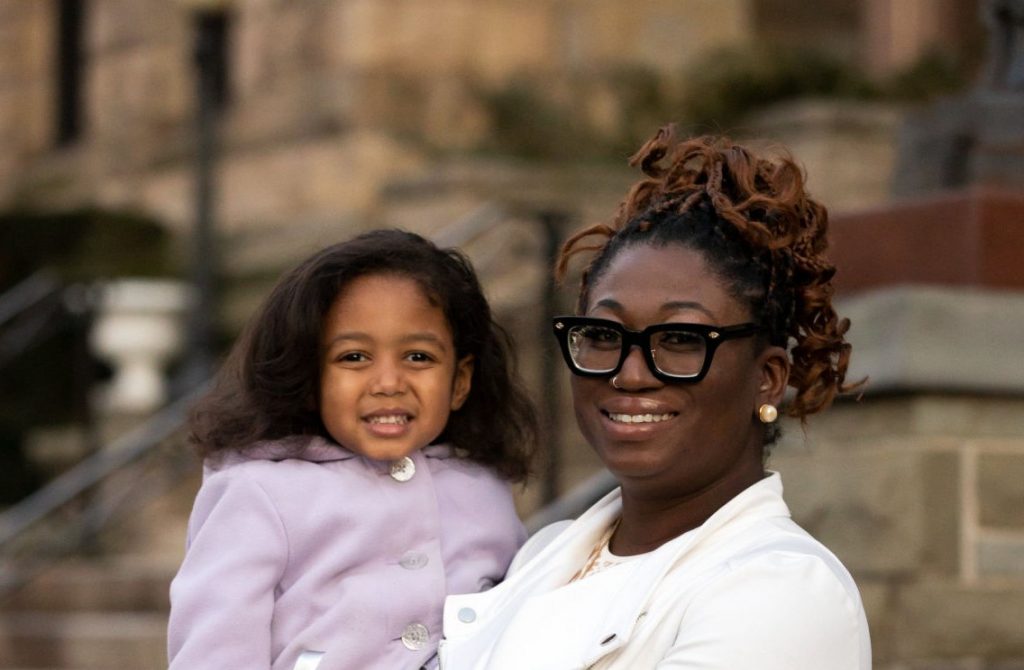 Navy veteran impacting Scranton inside and outside city hall

Amber Viola’s need to help people and do what’s right drives her passion.

Whether it was sticking up for a classmate in her private elementary school who was kicked out for being gay or advocating for victims of sexual assault in the military, Viola, 35, is sure to stand up for others and her beliefs.

“At the core, it’s always been about helping as many people as I can, doing the most good I can do,” the Scranton resident, Navy veteran and single mom to Jacquelyn, 4, said. “I’ve always been one to stand up for the underdog and speak out against anything that was going to harm people. I try to be there to help people wherever they need me.” 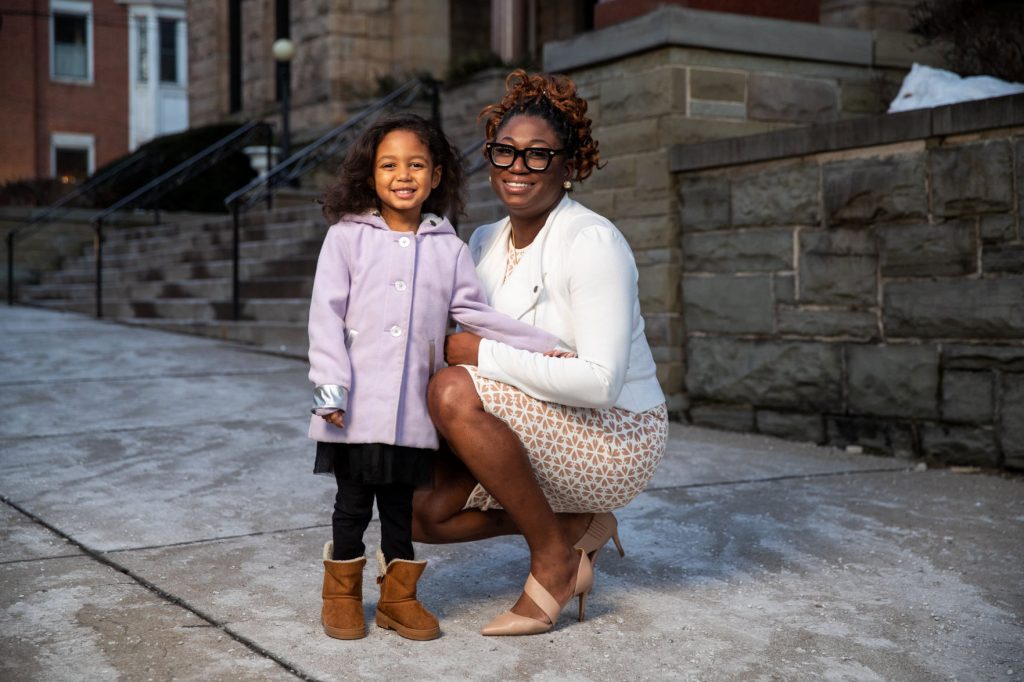 Scranton resident and city human resources director Amber Viola, with her daughter, Jacquelyn, 4, is a Navy veteran, former advocate for military sexual assault victims and dedicated community volunteer, lending a hand to causes that include racial equality, veterans affairs and giving back to those in need. – CHRISTOPHER DOLAN / STAFF PHOTOGRAPHER

After graduating from North Pocono High School, the then-Gouldsboro resident attended University of Scranton for a year but found herself searching for something more. Her mom, Brenda Johnson, had retired from the Army, and her brother, Joseph Robinson, was considering joining the military after high school, so the siblings decided to both sign up. Robinson, who Viola said is her best friend, went into the Air Force (he remains on active duty), and Viola joined the Navy.

First stationed in Everett, Washington, Viola spent most of her time aboard the USS Abraham Lincoln. She then became a victim advocate for the Department of Defense and worked closely with victims of sexual assault and their families.

“Whenever or wherever the survivor wanted me with them, I went,” Viola said. “Your job is basically to be with them from the very beginning, from the hospital and getting any examinations, all the way up to court, if they choose to take it that far. … You are there for them every step of the way to guide them or to just be there for them.”

She learned a lot about sexual assault and harassment in the military as well as military sexual trauma’s (MST) similarities to post-traumatic stress disorder. Additional challenges can develop from MST, including eating disorders, depression, anxiety, addiction, suicidal ideation and more. Viola often felt that those around her in the military didn’t understand how detrimental this could be for survivors. She spoke up on their behalf on dozens of occasions, like when she explained a treatment plan to a survivor’s superior and the superior began to question the survivor’s needs.

“It was clear to me in that moment (the superior) was not prioritizing mental health,” Viola said. “Everyone should carry out the mission to the best of their ability, but if your people aren’t good mental-health wise, they’re not going to be able to do that. … Much of my time there was seeing this firsthand and doing what I could to help.” 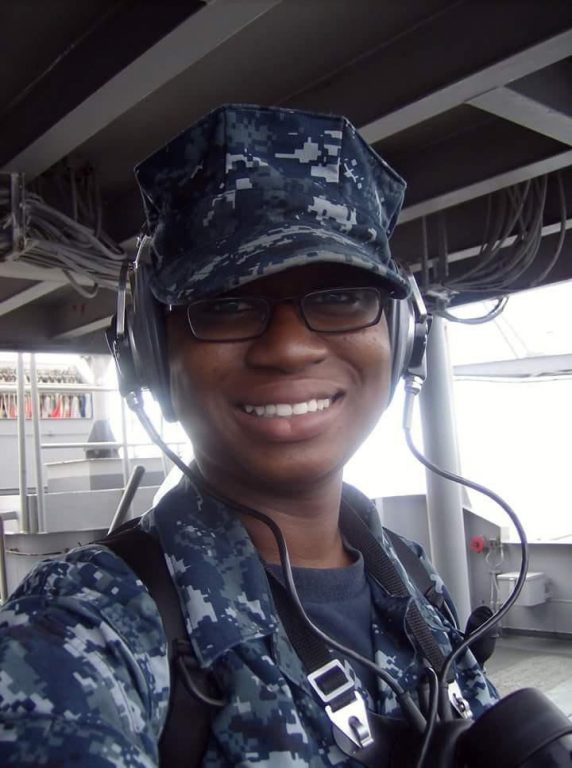 After Viola joined the Navy, she was first stationed in Everett, Wash., and spent most of her time aboard the USS Abraham Lincoln. She then became a victim advocate for the Department of Defense and worked closely with victims of sexual assault and their families. – SUBMITTED PHOTO

Through her role as a victim advocate, she realized her future included helping people on a legislative level, one that could create real change.

After eight years in the military and now living in Virginia, Viola began to plan her exit. She made a to-do list that ranged from enrolling in school to finding a place to live to securing childcare for her daughter. She saw herself in social work, helping as many people as she could, and enrolled at Marywood University. Viola moved into her home and began school the next day, which set the tone for the following years.

“It was a lot. I was basically a broke college student for three years who still needed to work and provide for my family,” she said. “I think back to that time and I’m like, ‘When did I sleep?’ I have no idea how it worked, but it did.”

Viola drew upon the determination and stamina from her naval career to see how far she could stretch a dollar and how many tasks she could fit in a day. She remained laser-focused on getting her degree while serving as president of Marywood’s Student Veteran Alliance and still making time for community work including as an intern with the Community Intervention Center, Scranton. 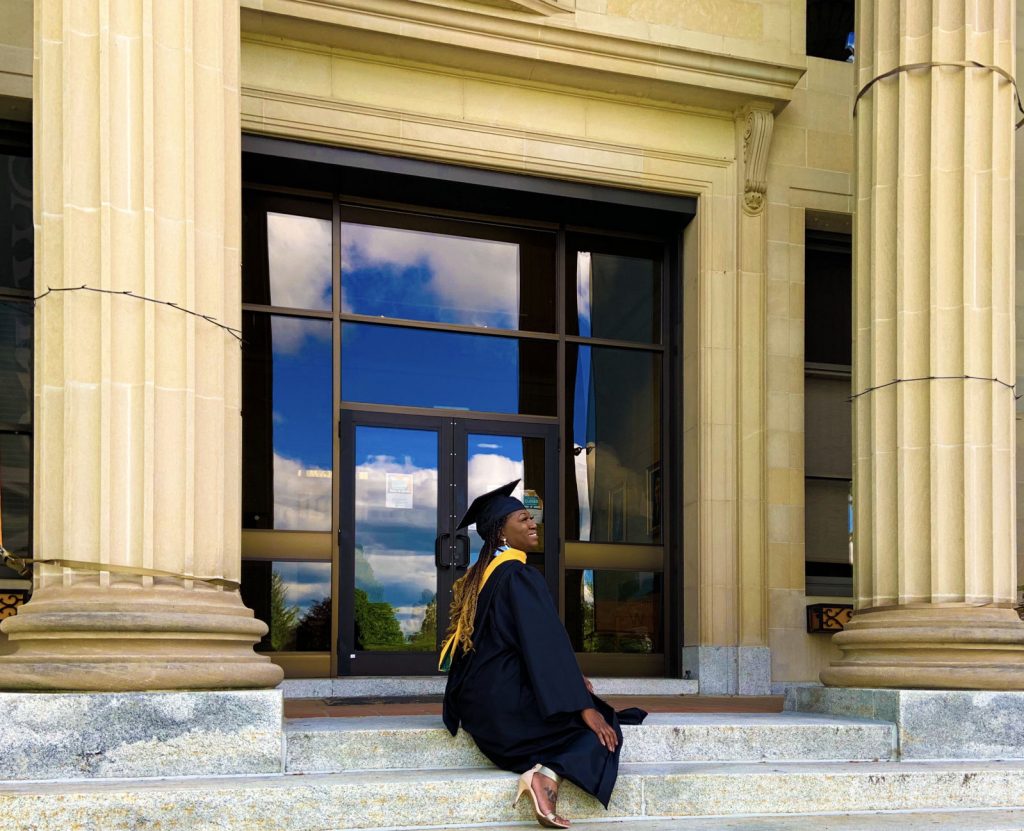 Viola, who graduated with a bachelor’s degree in social work from Marywood University last spring, juggled a full class schedule while supporting her family, dedicated to reaching her goal. – SUBMITTED PHOTO

Viola graduated last spring and plans to earn a master’s degree in social work, but she put school on pause for the rest of the pandemic. Viola began to look for a job instead and also ran for Scranton City Council and the Scranton school board. While she didn’t nab either position, she made an impression. When the position of director of human resources for the City of Scranton, part of Mayor Paige Gebhardt Cognetti’s cabinet, opened, Viola applied and was hired. She now uses her Navy leadership experience — where she was in charge of training, evaluating, disciplining and supervising sailors — in her day-to-day work at City Hall.

Cognetti noted Viola brings a community-minded approach into everything she does for the city. This not only includes Viola’s administrative work but also the racial bias and policy training Viola is in charge of. The two also connect about the importance of being moms to little girls as Cognetti’s daughter Sloane is 13 months old.

“In the lighter moments … it’s really fun to just talk to each other about Sloane and Jacquelyn. Sloane already looks up to and learns from Jacquelyn. It’s a nice personal connection with our daughters, and that’s something that’s special to me,” Cognetti said, adding she’s been working with Viola and others to explore grants to help residents with childcare. “Amber is an incredible asset to our community, and I really enjoy working with her.”

Viola’s also excited to work for the mayor and “an institution,” especially as a young Black woman. Viola hopes to generate change and “bring other people in who maybe wouldn’t have had the opportunity before I was there.”

The importance of her role is not lost on her, and over the summer she got involved in activism. Viola had never been to a rally or a protest since it’s not allowed for military members, but after the death of George Floyd, an unarmed Black man killed while in police custody in Minneapolis, Viola decided to attend protests with her daughter. There, she was overwhelmed by those who shared their stories as she also recalled her own experiences, including times police officers had treated her poorly or she faced racism in the military.

“I felt like this is it. I have a duty (to get involved),” she said. “I am in the position where I’m working with the city and the mayor. … I am the highest-ranking Black person working in City Hall. I don’t take that lightly. I have to do something.”

In an unplanned moment, Viola got on the microphone to speak that day. From there, she began helping planners with protests and rallies as well as working with groups such as the Black Scranton Project and its founder, Glynis M. Johns. Viola traveled to marches out of state and spoke at several other events, including Black Scranton’s Juneteenth celebration. She also belongs to the NAACP Organizing Charter Committee of Lackawanna County.

Viola participates in veterans advocacy groups as well, and she campaigned for President Joe Biden as part of PA Vets for Biden. She was featured in his campaign videos and in pieces by the Washington Post and Vogue. On Election Day, she volunteered to drive voters to polling places in a non-partisan effort. 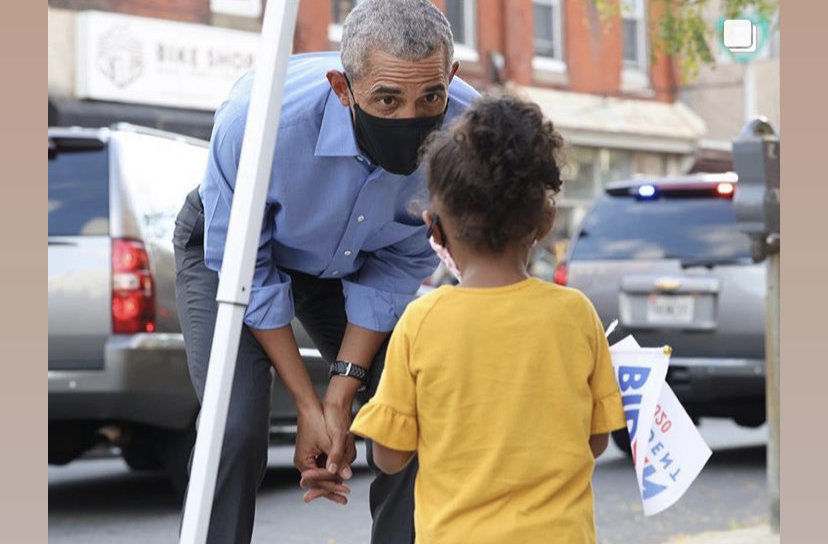 And she makes time for other community causes, too, such as the nonprofit Do It for Dame, started by the mother of one of Viola’s former North Pocono classmates, who died of an opioid overdose. When regional school districts shifted to virtual learning during the pandemic, Viola also hosted a laptop drive to get computers and money to buy them for students in Scranton School District who didn’t have them. 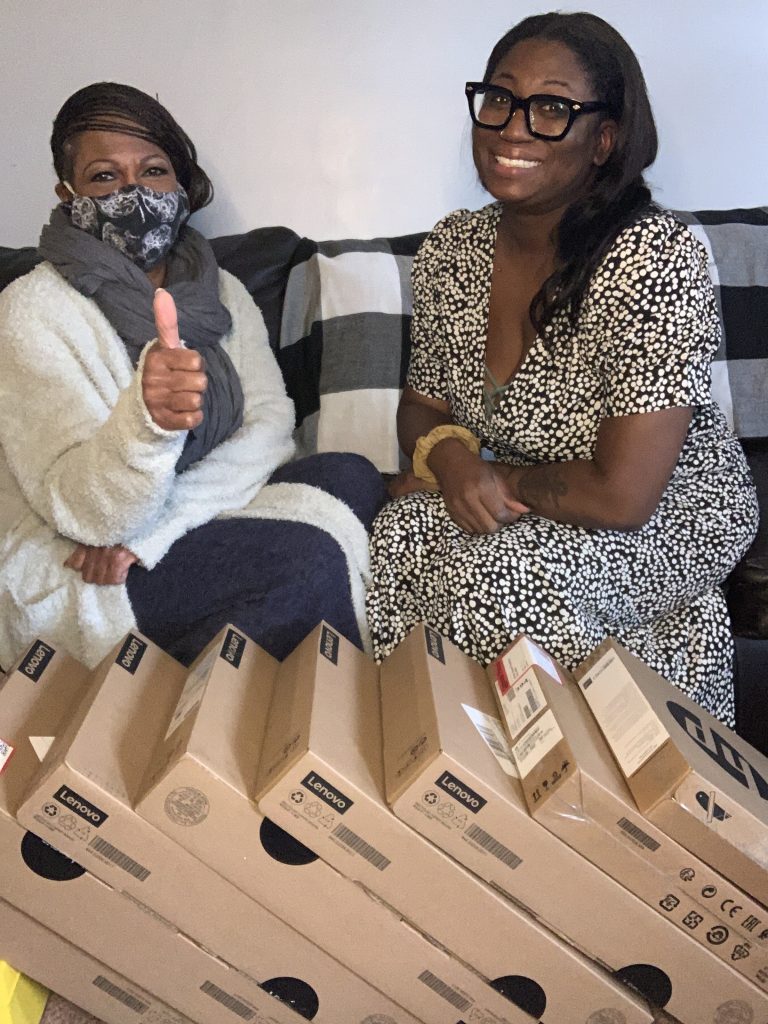 When regional school districts shifted to virtual learning during the pandemic, Viola, right, hosted a laptop drive to get computers and money to buy them for students in Scranton School District who didn’t have them. – SUBMITTED PHOTO

She sees no end in sight as far as her activism and community involvement are concerned, but right now Viola focuses on her role with the city. While on the surface Scranton seems to lack diversity, Viola described the city as a melting pot, with large groups of Black, Latinx and Nepali populations. Diversity is necessary, she said, and different perspectives matter.

On a personal level, every day she strives to be the role model she felt like she didn’t have, especially for her daughter.

“As a dark-skinned Black woman in a very white area, I didn’t see a lot of role models who looked like me. … There are so many more women of color in the forefront of things, including the election,” Viola said. “Kamala Harris, Stacey Abrams, women of color, Black women who look like her. … I just want her to look up to them and to me and see that she could feel beautiful and confident as a Black woman and know there’s a place for her in society.” 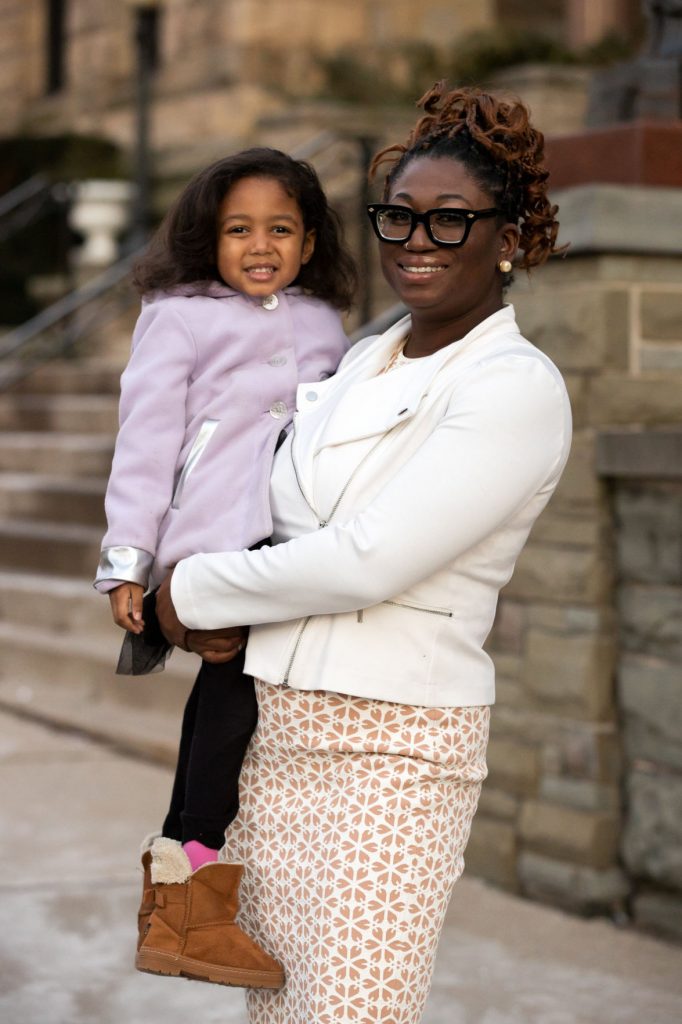 Scranton resident and city human resources director Amber Viola, holding her daughter, Jacquelyn, 4, is a Navy veteran, former advocate for military sexual assault victims and dedicated community volunteer, lending a hand to causes that include racial equality, veterans affairs and giving back to those in need. – CHRISTOPHER DOLAN / STAFF PHOTOGRAPHER

Employment: Human resources director for the City of Scranton

Claim to fame: A Navy veteran and former advocate for military sexual assault victims, Viola is a dedicated activist and community volunteer, lending a hand to causes that include racial equality, veterans affairs, battling the opioid epidemic and giving back to those in need.