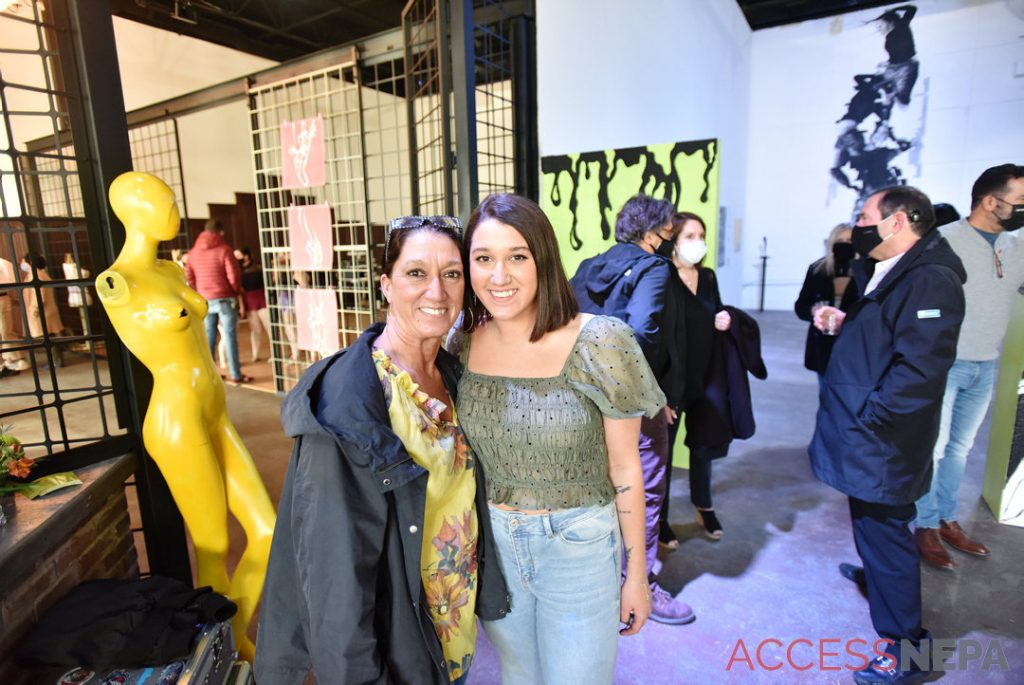 Anna Malsky’s pop-in visit from Philadelphia to her family’s West Pittston home ended with her opening an art studio in Forty Fort — right next to mom Gina’s dance studio.

“Anna and I have always fed off each other’s creativity. It just enhances both of our works,” Gina Malsky said of them working so closely together now. “Sometimes it can be frustrating because my mom role steps (in) and it adds a different energy that we both don’t always adjust to, but in the end we always make it work. We disagree, collaborate, and respect each other as artists.”

After five years living in Philadelphia and working as a teaching artist at a center in Ardmore, Anna Malsky, 26, went home to West Pittston to witness a haircut and wound up staying. Her brother, Leo, was getting his long hair shorn for Locks of Love, by his mother, Gina, and sister, Alli, in the family backyard.

Anna explained how the haircut led her to rent a space next door to her mother’s dance school extension space at 900 Rutter, the trendy, artsy, mixed-use 19th century former canning house in Forty Fort.

“I wound up staying for the summer,” Anna said in an interview at 900. “I came here to see what Mom was doing and met David Koral, the owner. We were chatting about art studios. We brainstormed and the next thing you know I would become the artist-in-residence, so I decided to move back.”

Anna calls her space “ANNAMALY.” A takeoff on “anomaly,” the name came to her in a dream. She describes her business as an “ever changing gallery and collaborative art space. Local artists and art majors can come to us. We can help them create and give them a space to work. I’ll be teaching private art classes for kids and running drawing and painting workshops.”

She was trained at a traditional academy of fine arts in Philadelphia where the galleries were, as she put it, “white and quiet,” a vibe she doesn’t want at 900. She wants a space where local artists can showcase their art with “no stuffiness.”

On April 22, the mission was accomplished when a soft opening was a raging success. A continuous flow of hundreds of people stopped in to see the work of 15 local artists. But it wasn’t just about ANNAMALY. There was dancing next door at her mother’s Downtown Arts Extension, plus live music, wine tasting and meet-and-greets at all the businesses at 900 Rutter.

Gina’s original Downtown Arts studio was at the old Methodist church on North Franklin Street in Wilkes-Barre. She bought it in 2008. She sold it last December. Though she made a good run with it, the 138-year-old building needed extensive work, including a new furnace. As she put it, “I surrendered to the building.”

She moved her dance studio to a space on Schuyler Avenue in Kingston. Needing more room, she rented the space at 900 Rutter, which she calls the Downtown Arts Extension.

All in the family

With Gina and Anna finding their new businesses at 900 Rutter Ave., the rest of Gina’s kids — daughter, Alli, and son, Leo, — brought their own talents into the mix to help get ready for the opening and to help put the art and dance studios on the path to success

“It’s like they came from different mothers,” Gina said with a laugh as she described her three adult children.“One daughter’s a scattered, kinetic artist, another a laid back organizer and, the son, an under-the-radar, happy blue collar guy.”

Alli Malsky, 31, is an assistant manager of the Lehigh Valley Pink Store, a division of Victoria’s Secret. Her mother describes her as “the clipboard.” She did the logistics for the ANNAMALY soft opening.

“We were all over the place being crazy and she was the organizer. She did the finishing touches, working the reception table, placing flowers and hand sanitizers. Helping people know where to go,” Gina said of her eldest child.

Alli is always prepared to help her mother’s many dance events and her sister’s art events run smoothly. Unlike her admittedly scatterbrained mother and sister, she’s clearheaded, stress-free and efficient. She doesn’t forget anything. Out in the 900 parking lot, Alli opened the back of her SUV, revealing stacks of drinks and snacks for the event.

Leo, 29, also had a role in getting ANNAMALY going. He was, you might say, “the tool belt.” He helped with the heavy lifting and, being that he is handy with a drill, hanging art. His mom described him as pleasant and even keeled.

“People will say they didn’t even know I had a son when they hear about him. He is a quiet, low-key factory worker and he likes it that way,” Gina said.

What about Dad in all this?

Gina describes her husband, Leo, as chairman of “finance, transportation and security.”

“We’re all different,” Anna said, “but we came together and got it done.”

Tight as they are, they won’t be together this weekend. Daughter Anna is in Philadelphia, so the family will celebrate Mother’s Day next weekend, which is also Gina’s birthday weekend.

What will they do?

“I don’t know,” Gina said, “something low key, nothing fancy.”