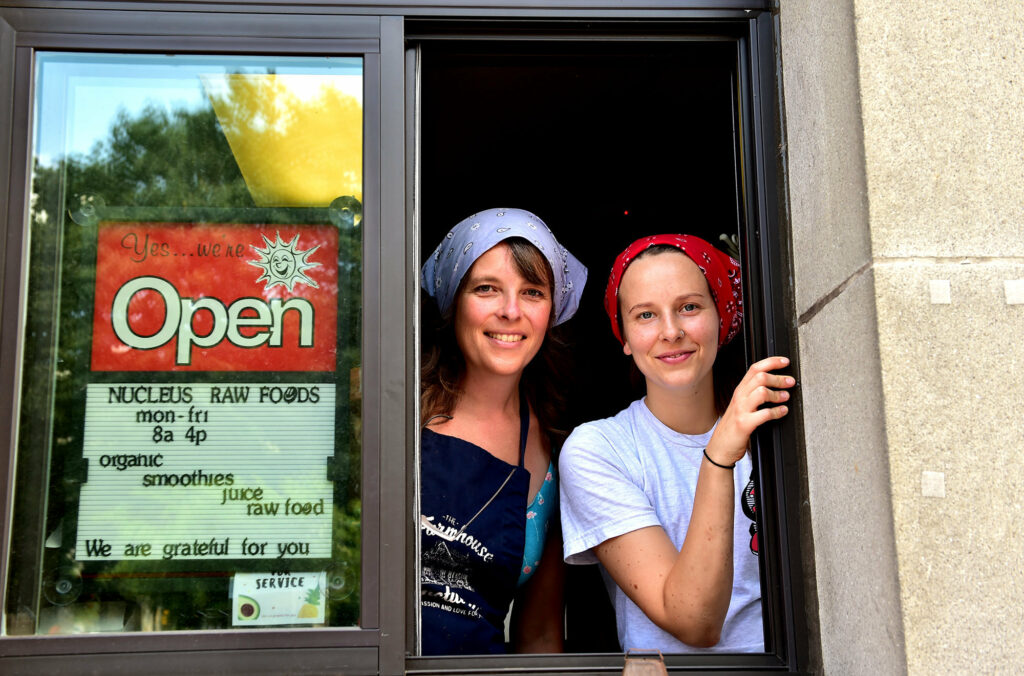 More healthy dining options on their way to Wilkes-Barre

Healthier food and beverage options have come to downtown Wilkes-Barre and more are on the way.

A soft opening will be held today, Friday and Saturday and then the sushi bar will be open 10 a.m. to 9 p.m. Monday through Saturday.

Switzer said they partnered with Shogun Japanese restaurant and a chef from Shogun will prepare the sushi.

“We saw the void and we tried to fill it,” he said.

The sushi bar has sparked a great deal of interest. After posting about it on Facebook, he said they got about 7,800 hits in two days.

“We know people are excited and we’re excited,” Switzer said. “We’re trying to bring something else down here.”

Canned vegetables and other groceries were stored in the back of the market where the sushi bar is now located. The grocery section was condensed and they also recently added a juice bar that also sells fruit smoothies and green smoothies.

City Market & Cafe, which opens daily at 7:30 a.m., serves breakfast all day and lunch options like subs, wraps, pizza bites and burgers, as well as a salad bar Monday through Friday and a full-service bar with a large selection of beer and wine that can be purchased to go.

Switzer and Partash also are taking over City Market & Cafe in Dallas Twp. and plan to add a full-service bar and restaurant there, as well as a patio. Dallas Twp. officials approved a permit for the project.

“It will be like a casual fine dining place. If you want to get a steak and your son wants chicken fingers and fries, that’s fine with us,” Switzer said. “We’re going to expand the menu and add dinners but all their classics aren’t going to change. We’re just adding on and making it better.”

The bar in Dallas Twp. will sell beer, wine, cocktails and martinis, he said.

Michael Valenti, owner of Valenti’s Restaurant in Exeter, owns City Market & Cafe in Dallas Twp. but Switzer and Partash have been managing it. 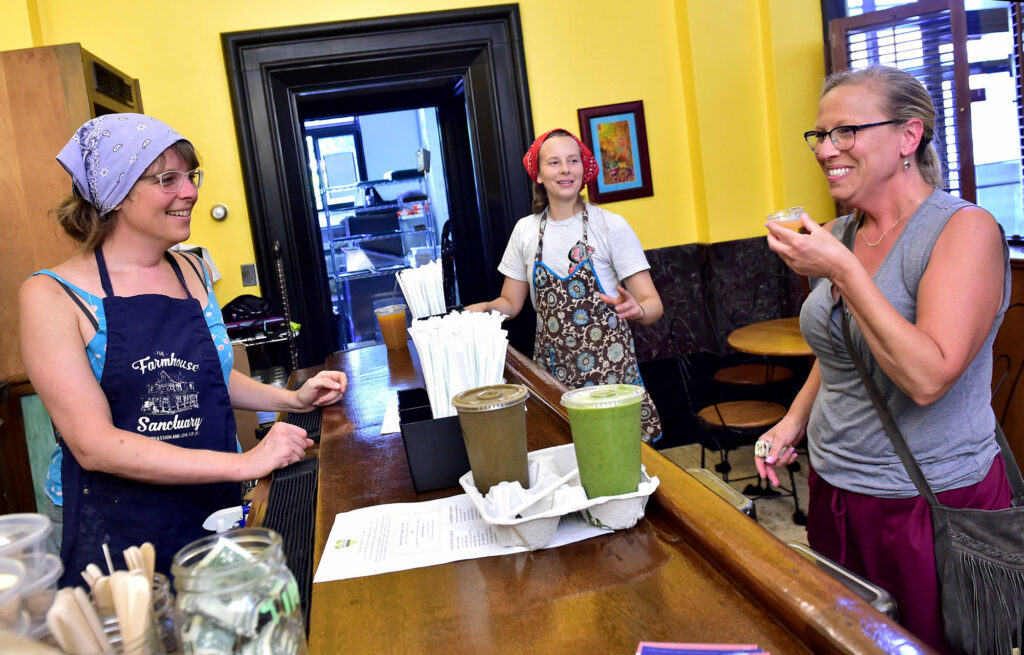 JoAnn Mason, of Forty Fort, right, samples a new juice from owners of Nucleus Raw Foods Danielle McGrogan, left, and Kamri Jacobs in the Luzerne Bank Building on her lunch break in Wilkes-Barre’s Public Square. Mason ordered her juice online so it was ready when she arrived. Sean McKeag / Staff Photographer

Nucleus Raw Foods, a vegan restaurant based in Luzerne, has opened a restaurant and walk-up window in the Luzerne Bank Building on Public Square. Danielle McGrogan, owner of Nucleus Raw Foods, said the downtown Wilkes-Barre restaurant offers a full menu of vegan, gluten-free, soy-free and organic foods as well as drinks like organic cold-pressed juices and banana smoothies.

The menu includes food like tacos with cashew chicken or sunflower taco meat and veggie burgers on gluten-free buns.

Nucleus also developed products like its own ketchup and prepares food at low temperatures that makes it easier to digest and more nutritional for customers, she said.

“We make everything from scratch,” McGrogan said. “It has been going great. We’re meeting the downtown demand perfectly and we have new customers coming in every single day. We have a local group who support us regularly.”

People can order online from Nucleus Raw Foods at nucleusrawfoods.com and their orders can be ready in 15 to 30 minutes, she said.

McGrogan said she is excited that her friend Christian Pilosi soon will open another complimentary vegan restaurant in downtown Wilkes-Barre.

Eden-A-Vegan Cafe, based in Scranton, is close to opening its second location at 134 S. Main St. near Wilkes University’s campus.

Pilosi expects to open in Wilkes-Barre in mid-September. Wilkes University students can use their “flex dollars” from their meal plans at the restaurant, he said.

He said he is excited about opening in downtown Wilkes-Barre where he will serve vegan options and “comfort food” like salads, soups, wraps, veggie burgers and pizza with vegan mozzarella cheese as well as smoothies and desserts.

He also is excited to be located near Nucleus Raw Foods, saying the businesses complement each other and he has been McGrogan’s friend for a long time.

About half of his customers are not vegan or vegetarian, but are just looking for healthier options, he said.

Pilosi will lease the space for the vegan restaurant from Jason Griggs, a member of Wilkes University’s board of trustees and owner and president of Griggs Properties LLC in Montgomery County, who purchased the South Main Street buildings. Apartments for Wilkes University students will be located on the first, second and third floors.

“We couldn’t have gotten luckier with this great space,” Pilosi said. “Everything is looking great.”