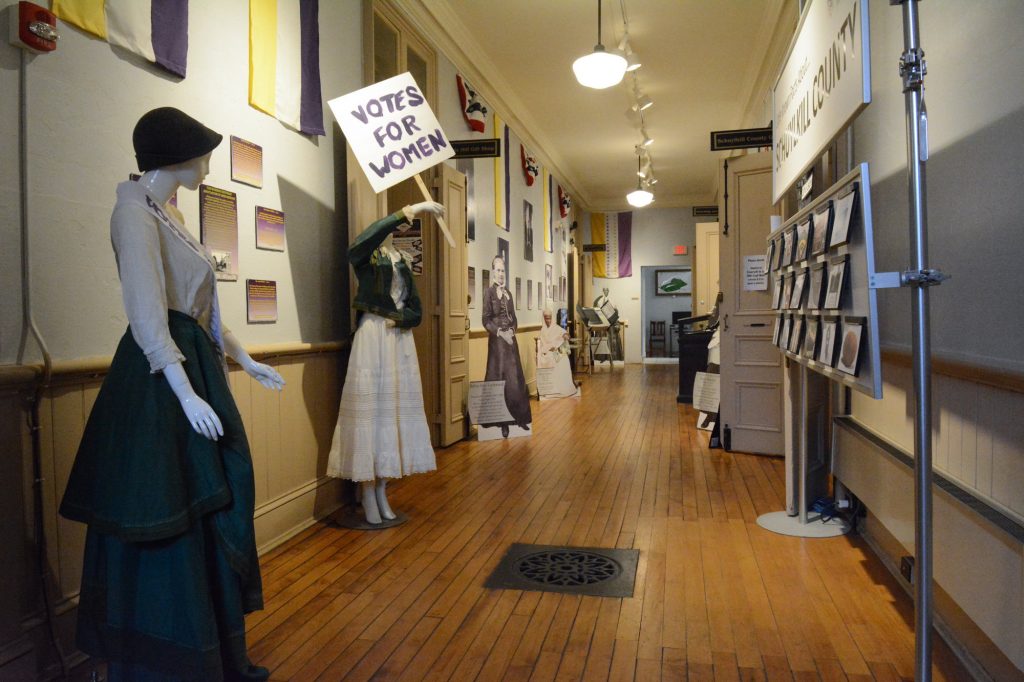 A little-known county native active in the Women’s Suffrage movement is the focus of the Schuylkill County Historical Society’s newest exhibit.

The life and work of Ida Porter Boyer is displayed in the museum’s front hallway. Born in 1859, in Middleport, she was a national suffrage organizer who championed the rights of women to vote.

“For all the work she did, there was no recognition of her in Schuylkill County at all,” he said. “I don’t think anyone knows about her.”

The display opened last week and will be up until the end of the year. It was put up to celebrate the 100th anniversary of the adoption of the 19th Amendment, which guaranteed women the right to vote.

“I’d consider her one of the leading women in history that came from Schuylkill County,” Zane said. 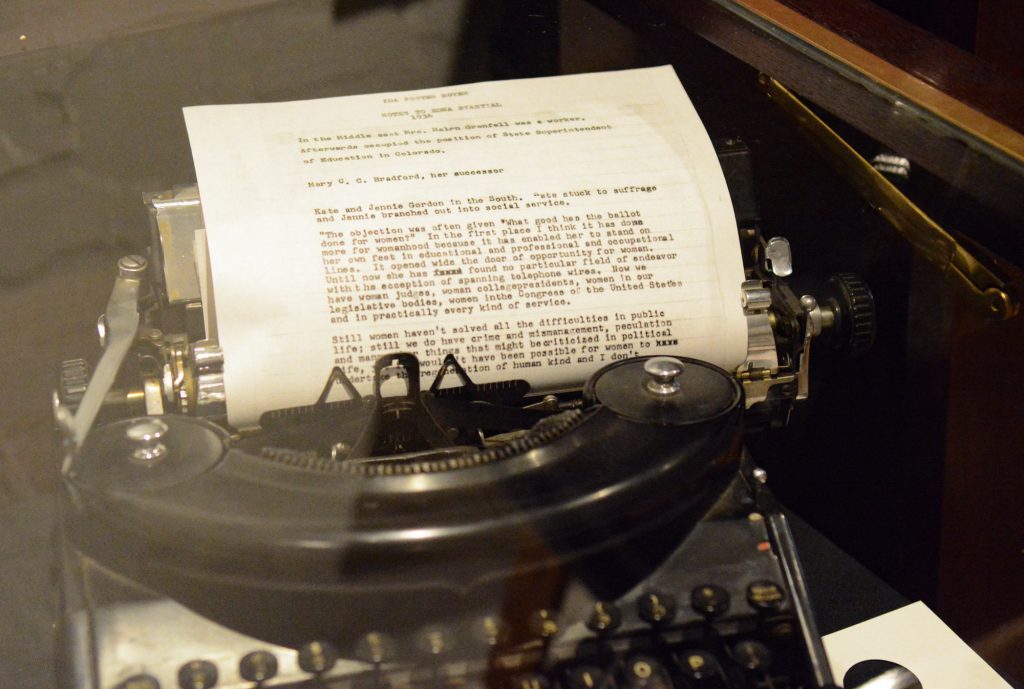 A typewriter and copy of a note written by Ida Porter Boyer is on display at the historical society.

The oldest of nine children, four of whom were girls, born to John Porter, a Union Army captain, and Elizabeth Kleckner Porter, Boyer learned early on that she could do whatever she could do she set her mind to, Zane said.

“He instilled (his daughters) them the sense that they can do anything they wanted to do,” Zane said. “They didn’t have to limit themselves.”

Her family resided in Mahanoy City and Lost Creek and was privately tutored growing up. Boyer got her first job in the now-defunct Lost Creek School System as a teacher. There, she initially earned $35 a month, according to Zane, but hoped to earn more. It wouldn’t happen.

She later moved to Reading and ran a private school before moving to the Harrisburg. Zane said that as a reporter for the Pottsville Chronicle, she covered the Chicago World’s Fair in 1893. It featured a women’s exhibit.

In 1894, she placed third in a national essay contest on “should women be granted full suffrage?” and testified in front of Congress along with women’s suffrage leader Susan B. Anthony. Boyer was a leader in several women’s suffrage organizations, including the Indian Woman’s Suffrage League in Oklahoma and the Michigan Equal Suffrage Association and a founder of the Massachusetts League of Women Voters.

She was first married to William Brown, then to Alva Boyer and had a son, Richard Porter Boyer.

Boyer’s travels also took her to Louisiana, Oregon, Vermont, Michigan and Ohio. At each stop, Zane said, her speeches were well received.

“Everywhere that she went, they spoke highly of her and gave her little awards,” he said. “She got along well with everyone.”

Zane said unlike some women active in the women’s suffrage movement, Boyer didn’t consider herself a suffragette, rather a suffragist.

As a suffragist, Boyer looked to persuade people about allowing women to vote through rational discussion, Zane said, adding that her demeanor was described by those who heard her as having “spoke nicely with grace.”

“She had a wit that she would disarm a lot of her opponents with her charm and her wit,” he said. “She didn’t get involved in civil disobedience.”

Boyer also didn’t forget her roots, referring to herself as a “coal cracker from Pennsylvania.”

Boyer was associated with Lucy Stone, ghost writing the suffragist’s biography. The suffragist also distributed news releases to Pennsylvania newspapers on the movement. Zane estimates she wrote thousands of releases. Boyer died in 1952 in Boston.

Zane stumbled across her name last summer researching the suffrage movement in Pennsylvania. He saw a sentence about “a woman from Middleport.” Doing further research, Zane discovered Boyer’s work to the movement.

He got much of the information about Boyer from her great-granddaughter, Carol Mueller, who resides in upstate New York, whom he contacted in the fall. Mueller drove down from New York to the historical society in October to give Zane photos and information about her relative.

“She was very pleased that her great-grandmother was being recognized,” Zane said.

Seeing her life on display, Executive Director Diana Prosymchak said she hopes visitors will learn about “a school teacher that forged ahead and was one strong woman.”

The exhibit has caught the interest of the Schuylkill County Democratic Women’s League to hold their monthly meeting at the museum to see the display. 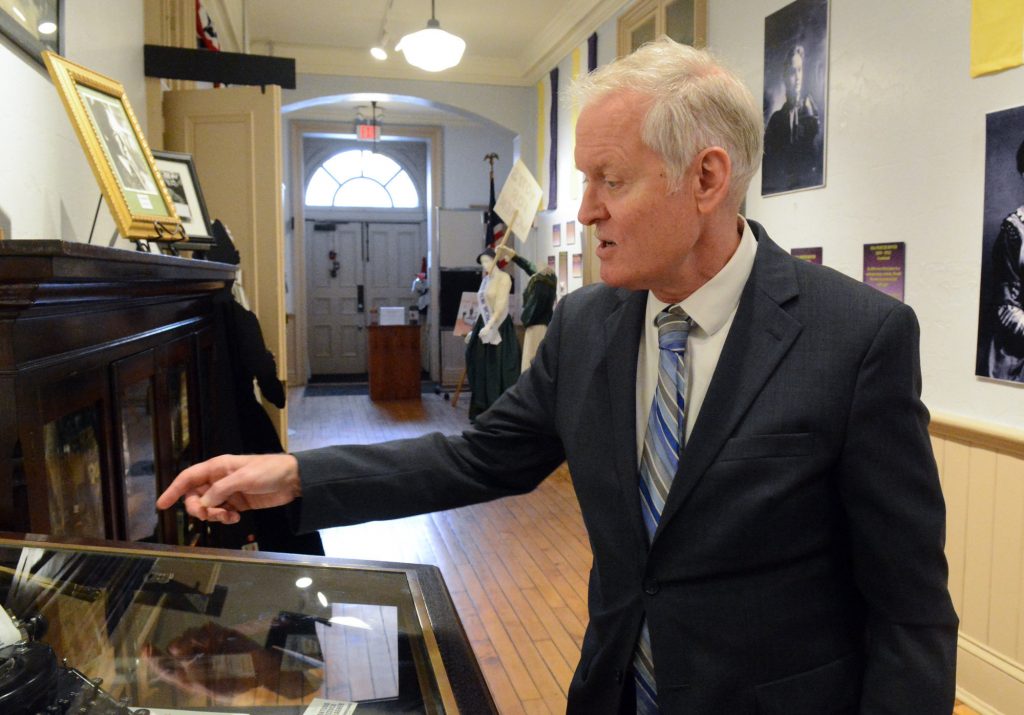 J. Robert Zane, president of the Schuylkill County Historical Society, talks about a typewriter on display at the Women’s Suffrage exhibit.

In addition to panels detailing Boyer’s life and work, the exhibit features mannequins in 19th century dresses, cutouts of famous women, flags, a display case of political memorabilia from local women candidates and panels detailing local women who were the first elected to county offices. A voting machine courtesy of the Schuylkill County Election Bureau is also displayed, along with video footage of suffragists.

The cutouts, donated by Schuylkill Women in Crisis, feature Belva Lockwood, the first woman to argue a case in front of the U.S. Supreme Court, and abolitionists Sojourner Truth and Harriet Tubman. Panels on the Women’s Suffrage Association of Shenandoah and quotes from women about the passage of the 19th Amendment are also part of the exhibit.

“It’s so important to cover history and to get people to see that we’re covering every aspect of the past,” she said.

Zane and Prosymchak said they encourage anyone with a story relevant to the exhibit to contact them at 570-622-7540.