A Dunmore native graced the silver screen in a feature-length film several years in the making.

MaryKatherine Cadden, a sophomore and film/video major at The Pennsylvania State University, portrays the role of Lily in “The Fallen,” a thriller directed by fellow PSU student Grant Donghia.

The film, which premiered at the State Theater, State College, Thursday night, is set in the wake of a contagion apocalypse, and focuses on a group of survivors. On a micro level, Cadden said, the film deals with the relationships between the survivors and their individual, inner struggles.

For Cadden, acting in the film was step back in to what she loves to do.

The daughter of Jim and Donna Cadden, who also has four brothers, Tim, Matt, Seamus and Jack, has been acting for many years and participated in Green Ridge Youth Theatre and Act Out Theatre as well as Dunmore High School Crimson Club during her freshman year. Though she switched focus to her studies for the remainder of high school, she decided to pursue acting again when she got to college. 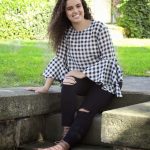 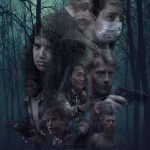 Landing her role in “The Fallen” was a twist of fate. Cadden received a school email that auditions were being held for the film, coincidentally, inside the building she was standing in front of.

“It was a split decision that I decided to go in,” she said, laughing, adding she’d never done on-camera work before. “It’s different than anything I’ve ever done before but it’s been such a cool experience being in front of the camera and just working on a film set.”

Coming from a large extended  family, Cadden drew on her own experiences to play the role of Lily.

“She’s the youngest of the crew and they might overlook her or think they have to protect her but she can hold her own ands wants to. She knows how to survive,” Cadden said. “I know what that can feel like to have to talk a little louder to get noticed or feel like you need to prove yourself.”

“The Fallen” was filmed over 9 months last year and was entirely student-produced, even though it wasn’t for credit.

“Grant didn’t want this to be something on the grade-scale,” she said. “He wanted to make this film just because and it was really cool for all of us to be part of that.”

It was also a way for Cadden to flex to skills on camera, which she plans on making her career path.

“This is what I want to do so even though it was totally different from stage acting, I loved the chance to just get comfortable in front of the camera,” she said. “I’m (also) so excited to see the final product and where it goes from here.”

Watch the official trailer for “The Fallen.”