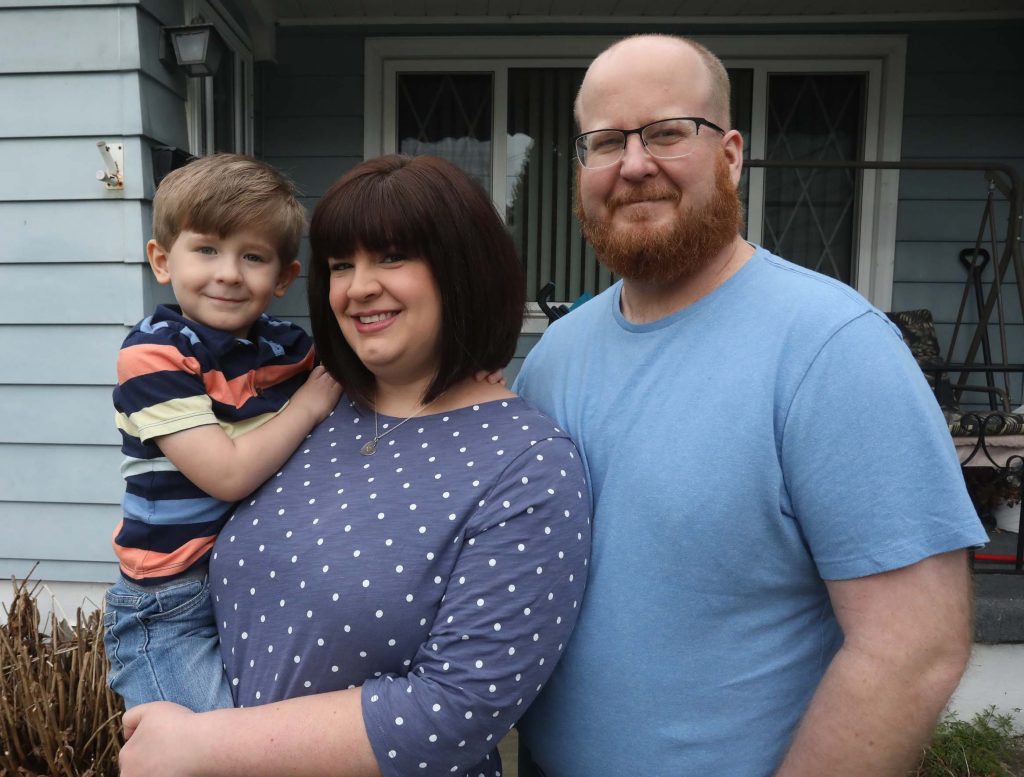 In Corey and Jill Wasko’s life together, there’s always been hope.

The husband and wife from Duryea are both registered nurses at Regional Hospital of Scranton, where she works in the operating room and he’s in the pre-op and post-anesthesia care unit. They see firsthand how precious life is and that the resilience of the human spirit is unmatched.

Also, being nurses, they know the statistics. So when Corey was diagnosed with glioblastoma in November 2012, they understood what that meant. The life expectancy for someone with glioblastoma is a year, Jill explained. With reoccurances — he had two — the patient usually is given a few months to live.

“By every statistic in the book, he should not be here,” Jill said, her voice breaking.

But statistics rarely factor in hope.

One of Corey’s favorite parts of his job are the times he gets to chat with the pre-op patients coming in for their chemotherapy ports. After some small talk, he tells them he’s a cancer survivor, and they’re often surprised when they find out he had brain cancer.

“I just try to tell them to think positive,” he said. “That’s the No. 1 thing I did, and it seems to be working. Do everything you’re told and don’t give up hope.”

When the couple first met and Corey asked out the then-Jill Fuhr, she turned him down. He remained hopeful, though, and the two eventually started texting and then went out on a group date to an Eddie Money concert. It came time for a real date — a trip to several local wineries — for just the two of them, and Jill remembers wanting to back out because of snow.

“He told me, ‘I just bought a brand new truck. We’ll be fine,’” she said, laughing. “We just hit it off from there.”
They were engaged by April 2012 and started to plan a wedding for the following May. When they got home from a cruise that October, though, Corey started to have terrible headaches that wouldn’t go away. A doctor scheduled an MRI right away.

“Nurses make the worst patients,” she said. “His doctor knew something was definitely not right.”

The MRI was pretty standard, but Corey became suspicious when it took longer than expected. He really knew something was wrong when the tech explained that he needed to hang back for a bit and “recover” from his MRI. Then, the radiologist brought Corey into the room to show him his results while his family doctor stood by on the phone.

“I looked up at the screen and I saw my head and a big ball of something I know is not supposed to be there,” he said.

He called this then-fiancee and told her he likely had a brain tumor and would need to have surgery immediately. After seeing a local surgeon the next day, the Waskos sought a second opinion at Thomas Jefferson University Hospital on reference from a friend from work, Dr. John Kutz. There, Dr. David Andrews made them feel at ease.

“I walked out of the appointment the day before hysterical in tears,” Jill said. “I left Philadelphia that day feeling like we could do this. (Corey) could do this.”

“He lit us up that there was hope,” Corey said.

Andrews urged the couple to eat, drink and enjoy their families during Thanksgiving that next week, with surgery the following Wednesday.

Over the weekend, the couple made a major decision — and by Sunday, they were married. A coworker’s brother officiated the ceremony, and their other co-workers surprised them with a reception at Arcaro & Genell in Old Forge.
No matter what happened, they were husband and wife.

“If I wasn’t going to get married in May, I didn’t need it,” Jill said through tears. “It was so beautiful and thoughtful. All that mattered was that we were married.”

The couple turned their originally planned wedding on May 26, 2013, into a vow renewal, walking into the ceremony to the sounds of “Two Tickets to Paradise” by Eddie Money, an homage to their first date. 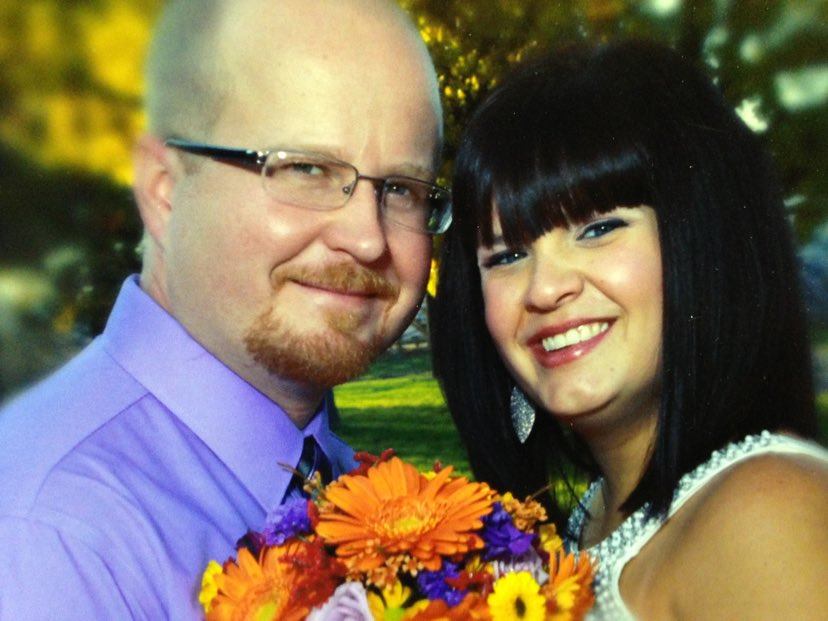 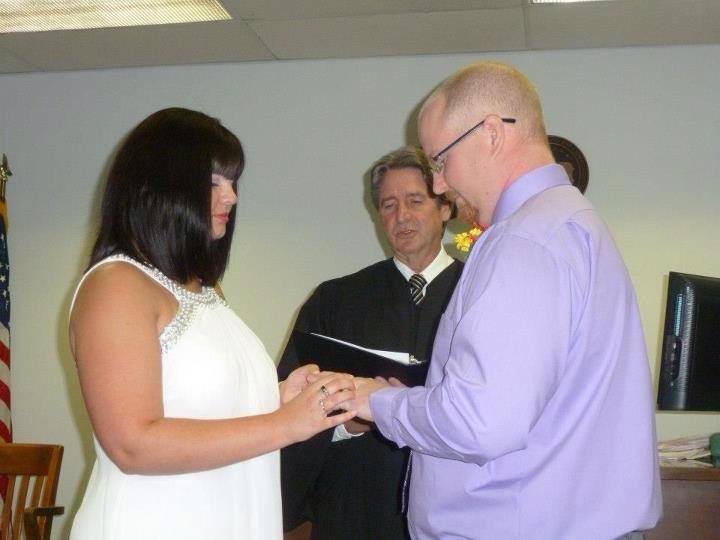 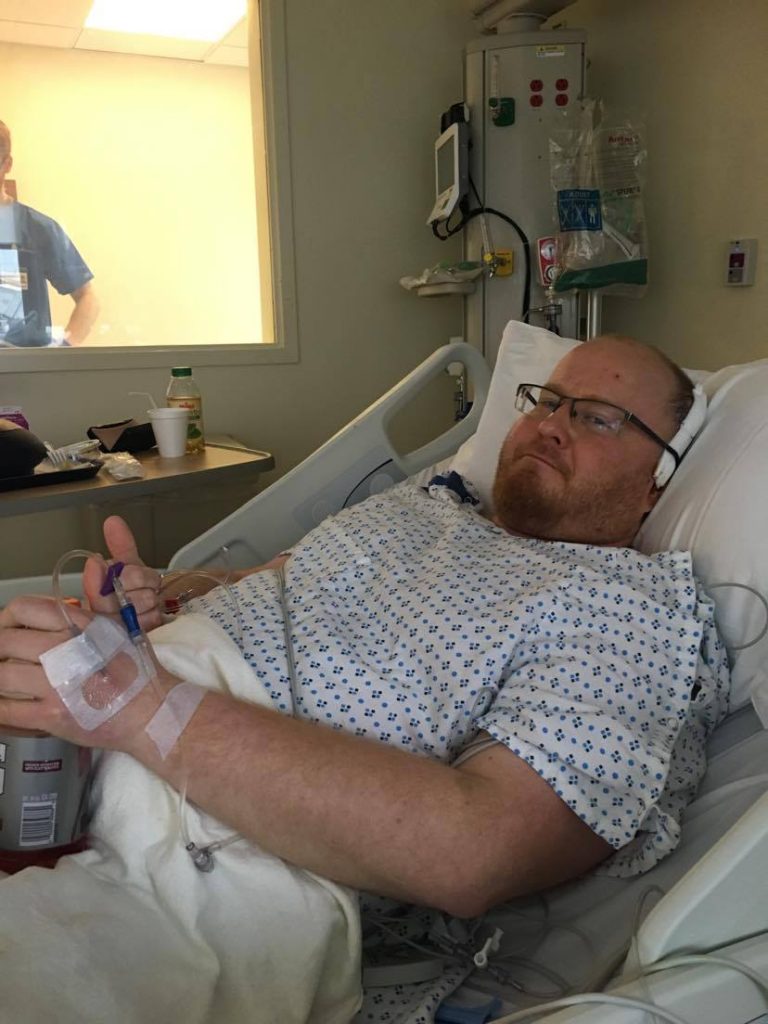 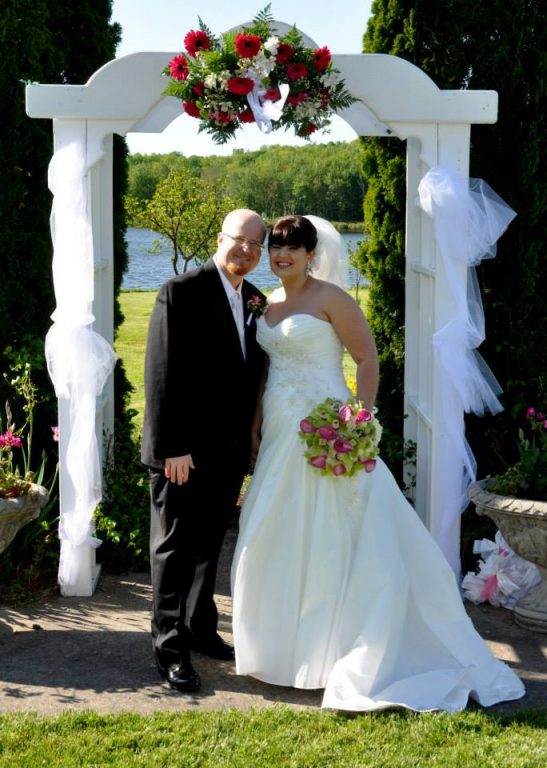 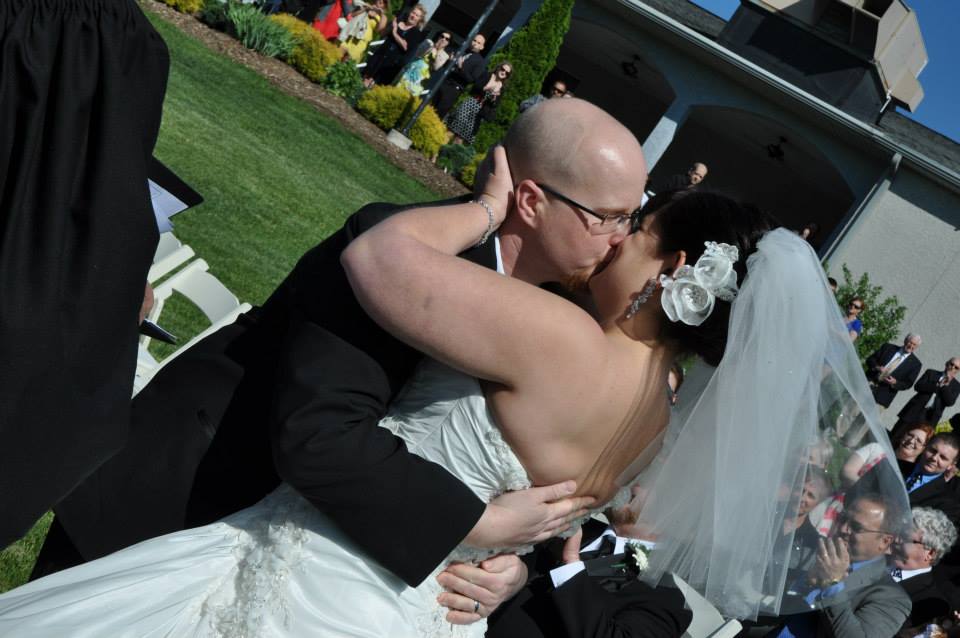 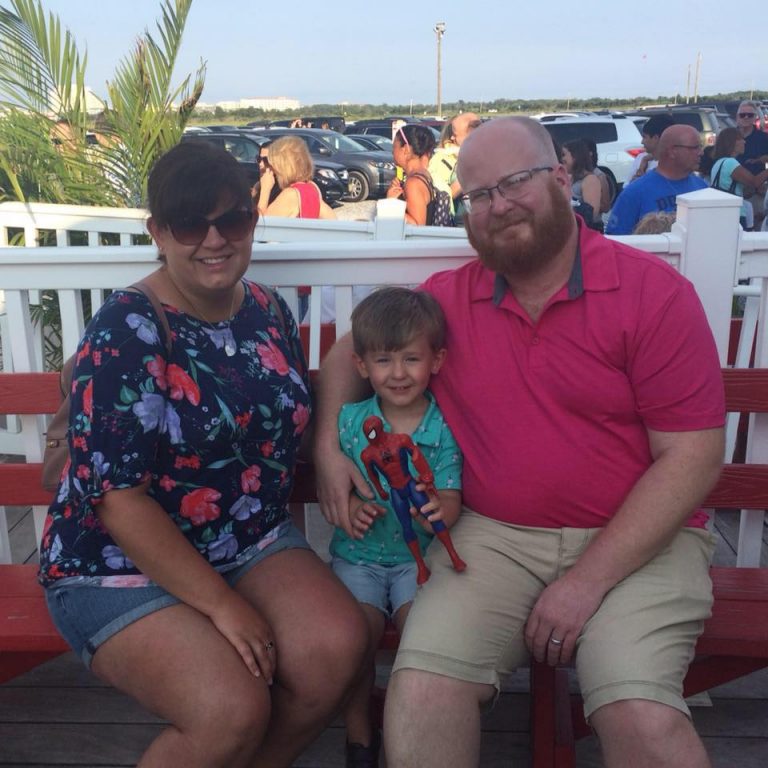 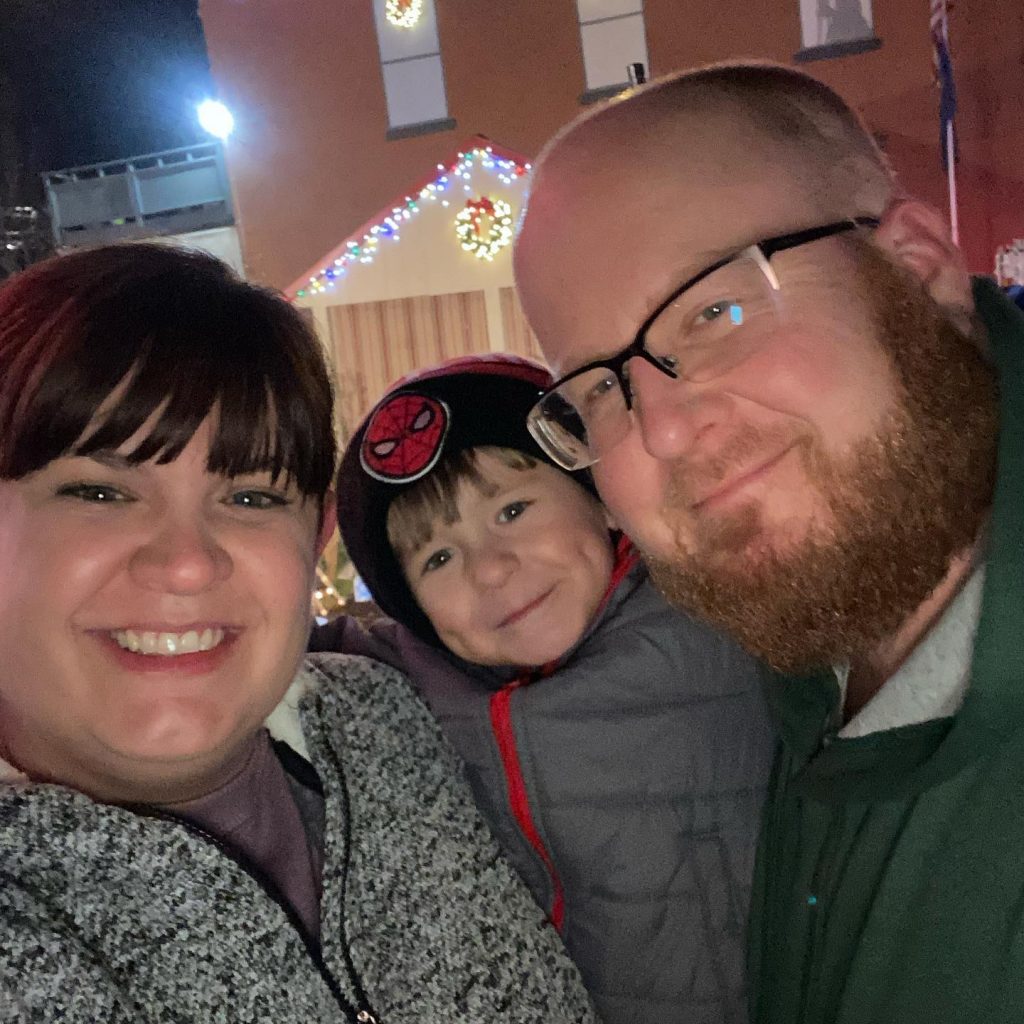 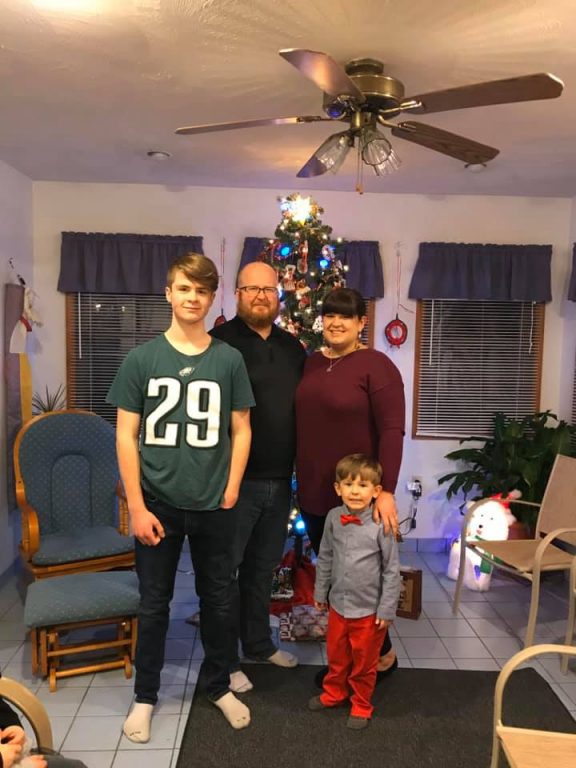 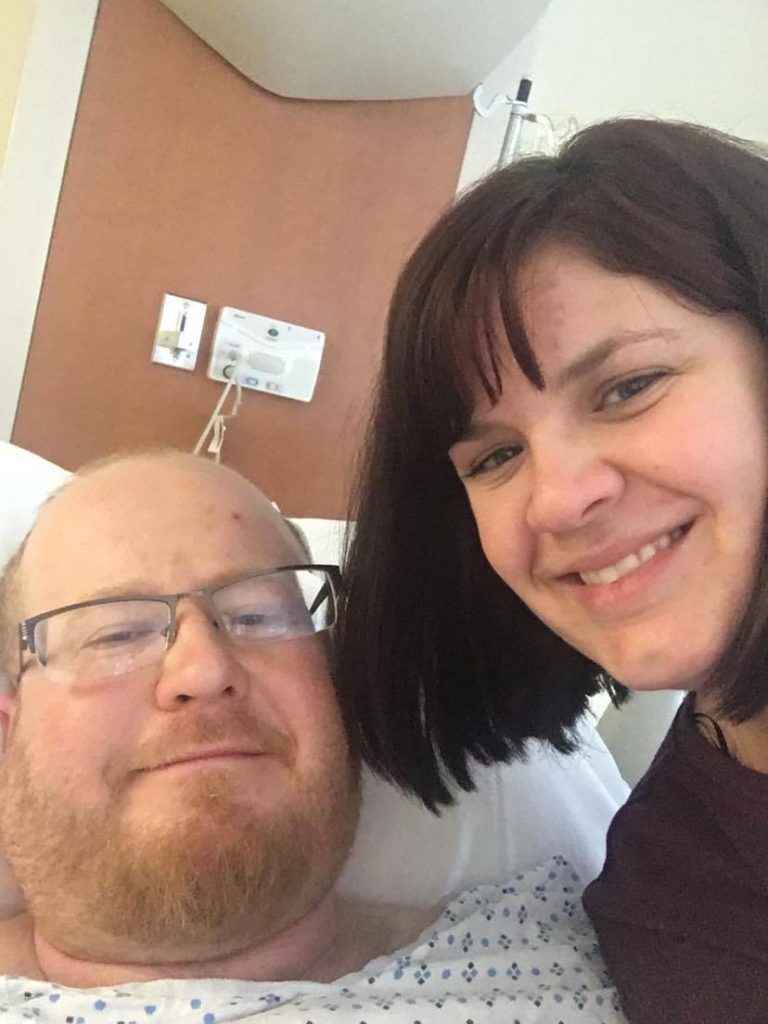 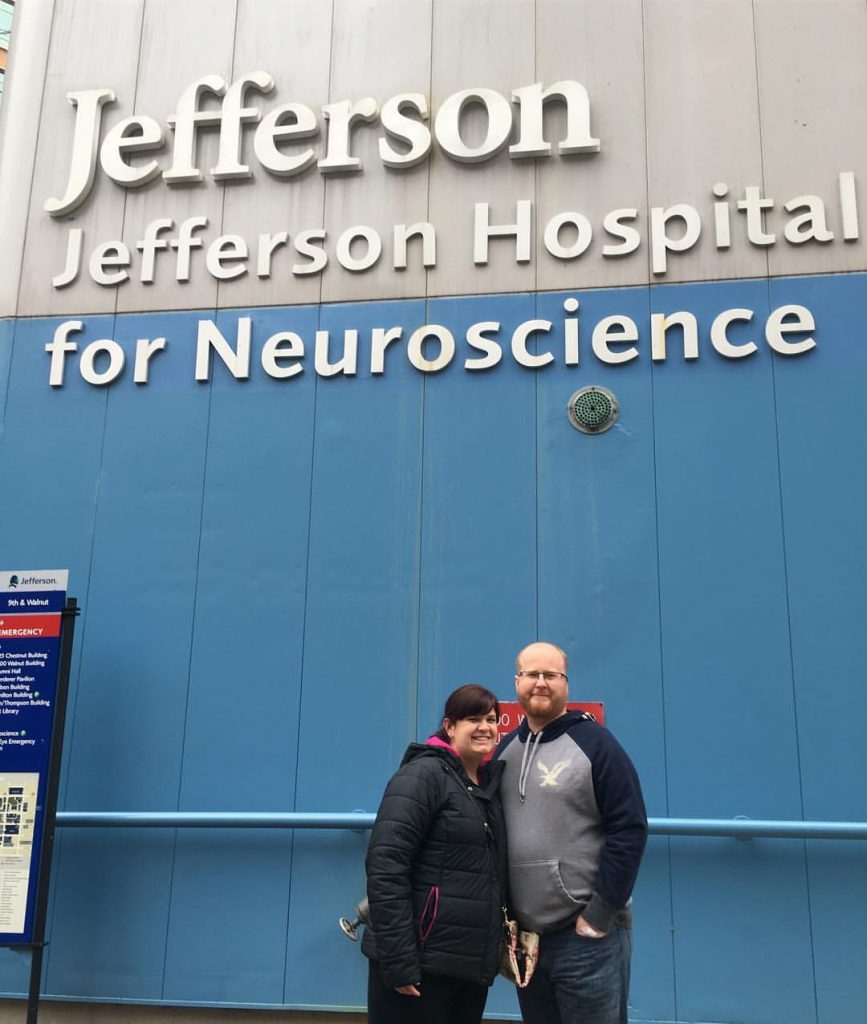 Soon after, the Waskos begin to discuss family planning since doctors weren’t sure what chemotherapy would do to Corey’s fertility, or if he would stay on chemo his whole life. While he has an older son, Christian, now 16, the couple hoped to have children together. They started to do fertility treatments, including three rounds of intrauterine insemination, all of which failed.
When the 18 months of chemotherapy ended, the doctors felt it was safe for Corey to go off the treatment. Six months later, in May, the Waskos met with a urologist, who gave them the OK to start trying to get pregnant. Jill was pregnant naturally by June.

“It was crazy,” she said. “It was almost immediate.”

Through it all, she kept her friends, family and co-workers updated on her husband’s progress through social media. While it started as a way to keep everyone in the loop, it turned into a way to support others who reached out to her during hard times.

“If I could help just one person with anything, that’s enough for me,” she said. “I always encourage people to reach out to me, even if it’s just to talk. I have an amazing support system, but sometimes it’s nice to talk to someone who’s actually been through it.”

The Waskos journey wasn’t over yet.

In January 2016, when Jill was seven months pregnant, doctors found a small tumor in the same location as the first one during one of Corey’s routine scans. This required 10 rounds of intensive therapy locally at Northeast Radiation Oncology Center, Dunmore, under the care of Dr. Christopher Peters. Jill gave birth to their son, Tommy, that March.

“There were no complications, no nothing,” Corey said. “He was just this wonderful, healthy baby. We couldn’t ask for anything better.”

That December, Corey had another recurrence that, this time, required surgery. Afterward, he enrolled in a clinical trial of Toca-5. Everything seemed fine until three weeks later, when Corey became violently sick and was life-flighted from Scranton to Thomas Jefferson University Hospital. He spent 18 days in intensive care with an external drain to help alleviate cerebrospinal fluid from absorbing. Other complications included sepsis and meningitis, as well as another two-week stint in the ICU after his shunt migrated and got trapped under his diaphragm, causing excruciating pain and pneumonia.

While trying to take care of their nearly 1-year-old son, Jill worked full-time for four days a week at the hospital and then drove to Philadelphia to be with her husband before doing it all over again. She leaned heavily on her parents, Bill and Jenny Fuhr, and mother-in-law, Cathy Wasko (her father-in-law, Thomas, died in 2016), for support. While Corey doesn’t recall much of those health scares besides the helicopter being loud and cold, he does remember his wife’s resilience.

“(Jill) has had stress beyond stress beyond belief,” Corey said. “She was dealing with that and still doing it all. She just found a way to get through it and get it done.”

Jill is grateful for her husband’s clear scans, though she still won’t plan events or big vacations, besides an annual beach trip with her whole family, more than three months out. It’s a heavy burden they live with, she said, never knowing what’s coming in the next scan, but she tries not to let it get to her. She holds on to the hope that’s always got them through.

“I know I am the person I am today because of everything we’ve gone through,” she said. “We’ve definitely been through hell and back. We have a 4-year-old that we maybe wouldn’t have had otherwise. We have an amazing support system.”

The clinical trial Corey is part of is not approved by the Food and Drug Administration, as it didn’t outperform the current standard of care. However, under the FDA’s Compassionate Youth Act, the department, with the help of his doctor, Dr. Nina Martinez, approved Corey to continue on the trial medication since he’s done so well. The couple travels to Philadelphia every six weeks, and Corey takes 18 pills three times a day for a week. He also gets an MRI scan every three months to monitor everything.

While he’s grateful to be here today, Corey also thinks his experiences have made him a better nurse. He doesn’t worry about his past and just focuses on the day-to-day. He lives with hope.

“I try not to think about that as much as I should,” he said. “I beat it, and that’s it. If something happens, we’ll take care of it. I will say this: I chose every day a little differently than I would before.”