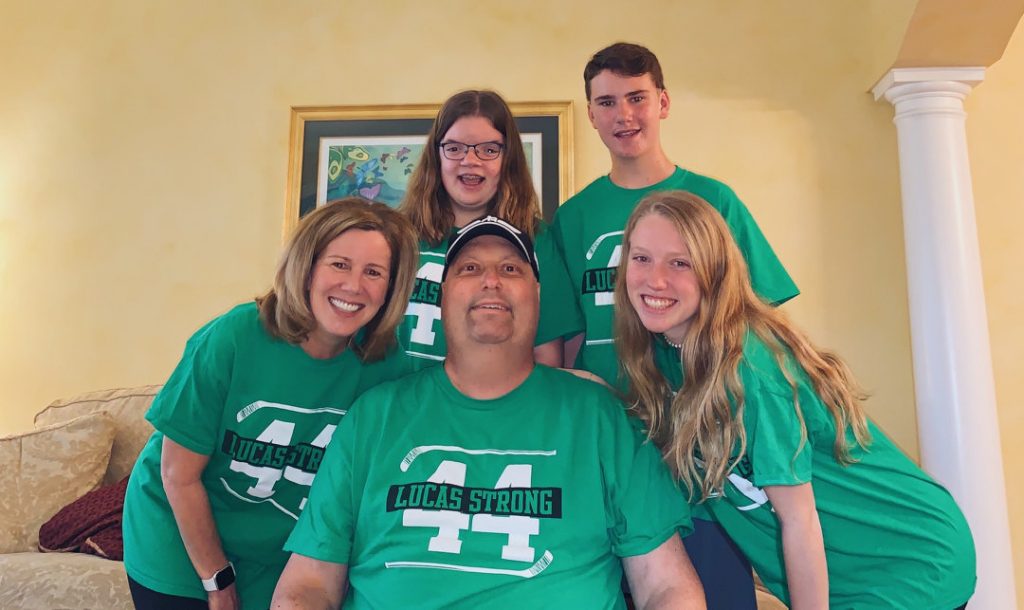 Who: Tom Lucas thought he broke his ribs last summer, but the problem turned out to be something much worse. The Tonawanda, New York, native who now lives in Clarks Green learned he had a mass on his chest wall and subsequently was diagnosed with osteosarcoma, a rare bone cancer.

Lucas, 48, is the son of Tom and Cathleen Lucas and became a lawyer after graduating from Boston University and the University of Pittsburgh Law School. Today, he is a partner at O’Malley & Langan Law Offices in Scranton alongside his wife, Mary Anne O. Lucas, but also keeps busy playing golf and being dad to kids Maddie, 17; Katie, 15; and Robby, 13.

Since his diagnosis, however, Lucas has had to put that life on hold for two invasive surgeries, one on his chest wall and another on his spinal cord, in addition to continuing treatment at the Hospital at the University of Pennsylvania in Philadelphia and the Henry Cancer Center at Geisinger Community Medical Center, Scranton.

What: Life is very different for the family these days, but Tom Lucas stays positive every day. He has never given up, daughter Maddie Lucas said, and he works daily to do everything he can to get better.

When/where: The Lucases took their personal struggle and turned it into a force for good, setting up a fundraising website through Penn Giving in honor of their dad, with proceeds going to Steps to Cure Sarcoma, which benefits sarcoma research (visit Penn Giving Pages at socialfundraising.apps.upenn.edu and search for “Lucas Strong”).

While Steps to Cure Sarcoma could not hold its annual 5K fundraiser in Philadelphia this year because of the coronavirus pandemic, it is offering a virtual walk instead this Sunday, May 31. Anyone interested in participating can finish a 5K on their own. For more information on how to participate or donate to the cause, visit stepstocuresarcoma.com.

In her own words: “The support that my dad has received is overwhelming and amazing. Already, my dad is so grateful for everyone that has supported him and supported this cause. Again, my dad is working so hard to get better, and knowing that he has friends and the community rallying behind him means so much to him and to our family.” — Maddie Lucas