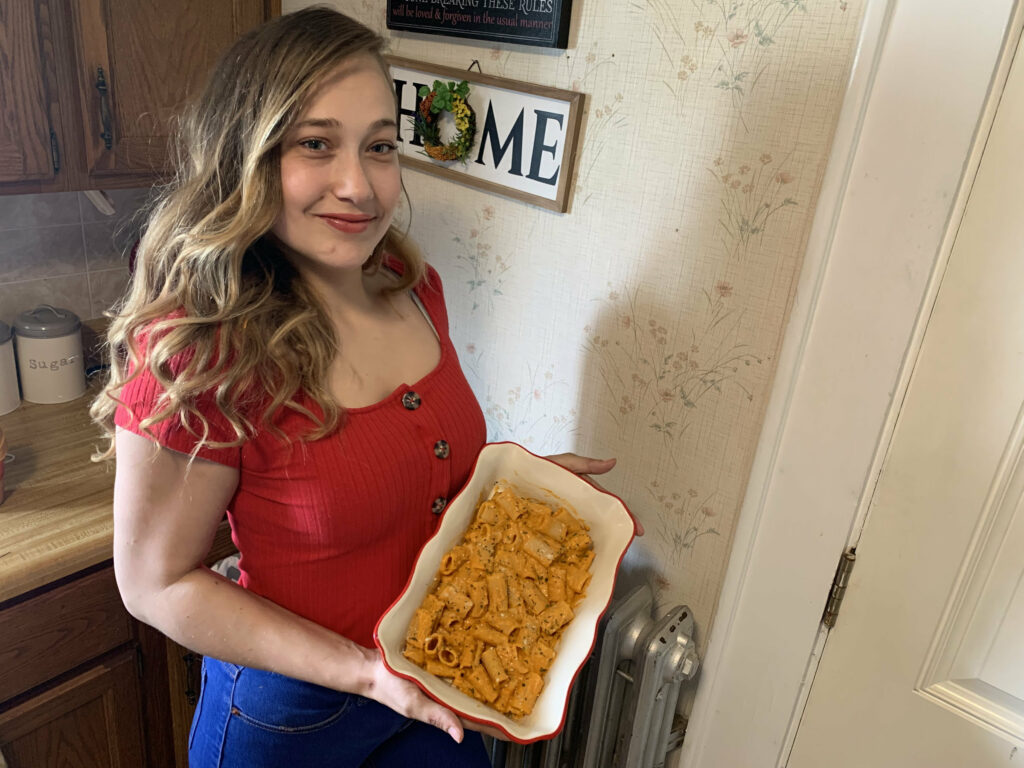 Guests always get a homecooked meal at Kait Shoemaker’s house.

The Moosic resident is known by friends and family for her personalized recipes, and Shoemaker frequently posts her creations to her social media accounts.

One of her most coveted recipes is Penne Pasta with Roasted Vodka Sauce. Local Flavor remains a big fan of many different cuisines, but Italian holds a special place in our heart. Shoemaker — who earned a $50 grocery gift card thanks to her recipe — feels the same.

“I’m always cooking Italian food,” the mom of Atticus, 3, and Eloise, 2, said during a recent afternoon inside her Downvalley home. “I love making sauce and homemade meatballs. You can usually find me making something Italian.”

Shoemaker admitted the sauce can be time consuming (it must roast for an hour to an hour and a half) but worth it for the taste. Ideally it’s made in a Dutch oven, but cooks can transfer from the stove to the oven as long as they have an oven-safe pot. The sauce has a little kick thanks to Shoemaker’s addition of crushed red pepper flakes.

“I think it gives the sauce a little something extra,” she said, adding that cooks can dial back on heat by omitting or lessening the amount of red pepper. “I love that it has the slight bite to it.”

Shoemaker’s sauce did not disappoint. The consistency was thick but not too heavy, and it was the perfect mix of rich from the cream and zesty from the tomatoes. The red pepper added an ideal flavor to the sauce which offset the cool Parmesan cheese.

The Dunmore native has lots of cooking experience. With more than a decade in the restaurant business and years of learning from her parents, Janine Tsikalas and Ronald Urban, under her belt, Shoemaker’s culinary creativity knows no limits.

Shoemaker loves to make comfort foods, such as pork tenderloin, roasted potatoes and, of course, sauce and meatballs.

“I always have (homemade) marinara sauce in the house,” she said. “You never know when you’re going to need sauce, and it’s great to have on hand.”

As a working single mom, simple, quick meals such as sheet-pan dinners are also a go-to for her family. In the summertime, she’s big into grilling, from different kinds of veggies, like zucchini, corn and bell peppers, to meats such as chicken and steak in a sesame ginger marinade.

“I really do love (cooking),” she said. “It’s one of my favorite things to do. To start making sauce early for a Sunday dinner. That’s the perfect day.” 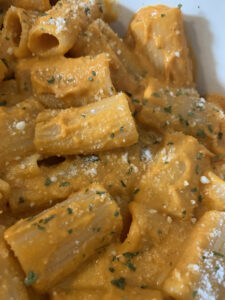 Preheat oven to 375 degrees F. Fry onion in olive oil for about 5 minutes or until onion is translucent. Then, add in garlic and vodka and keep on medium heat for 5 minutes. Add in red pepper flakes, oregano and diced tomatoes. Cook for 5 more minutes on stovetop. Transfer to oven-safe pot and roast between 60 to 90 minutes. Take pot out, add sauce to a blender and blend it until smooth. Transfer to pan on stovetop and add heavy cream. Cook for about three minutes on medium and add Parmesan cheese. Cook pasta until al dente and add pasta to sauce. Sprinkle with cheese and parsley as desired.