A trio of young women didn’t just fly through the Scouts BSA program when it opened to girls a few years ago.

And that hard work and dedication paid off. In December, Riverside senior Emily Calder, 18, of Taylor, made history as the first female to the attain the rank of Eagle Scout in the Northeastern Pennsylvania Council, BSA. Two other girls soon joined her: Wallenpaupack Area freshman Angelina Krug, 15, of Greentown, who earned the rank in January, and fellow Riverside senior Kyleen Bird, 18, of Moosic, in March.

“It’s really empowering,” said Emily, who plans to become a nurse. “I have the ability to say that I did that, when I know a lot of people aren’t even going to have that ability.”

In February 2019, the Boy Scouts of America rebranded as Scouts BSA and allowed girls 11 to 17 to join. While girls had been able to join the younger Cub Scouts for a year prior and also could participate in the co-ed Venturing program for many years, the change meant girls could now earn the prestigious Eagle Scout rank. It involves not just earning merit badges but also completing a major community service project and undergoing an official board of review.

Emily wasn’t a stranger to scouting, having tried Girl Scouts and Venture, but neither worked for her. After seeing her brother go through Cub Scouts and going to camp a few times herself, Emily joined Scouts BSA the day it opened to girls and belongs to Troop 1057.

“Honestly, I just realized really early on that I have as much of a right to be there as anybody else, and I knew that I wanted to get my Eagle from the very first day,” she said.

Like Emily, Angelina and Kyleen joined Scouts BSA that February. Angelina, also of Troop 1057, described herself as an outdoorsy girl who tagged along with her younger brother during his Cub Scout adventures, and her dad is an Eagle Scout.

“I wanted to make my own fun memories and friends. … I definitely have enjoyed having friends and meeting up with people who want to do a hike and do stuff together as a group,” Angelina said.

Kyleen had participated in Venture Scouts, and when her sister wanted to join BSA, Kyleen went along, too (their troop later folded because they didn’t have enough members, but they worked closely with the boys’ Troop 316). The girls’ mom, Heather, had watched her own brother do Boy Scouts and saw the practical value of skills learned there.

“Knowing … how to properly use a knife and how to do different things, it’s something every young adult should know,” she said. “If your power goes out, you should know how to survive.” 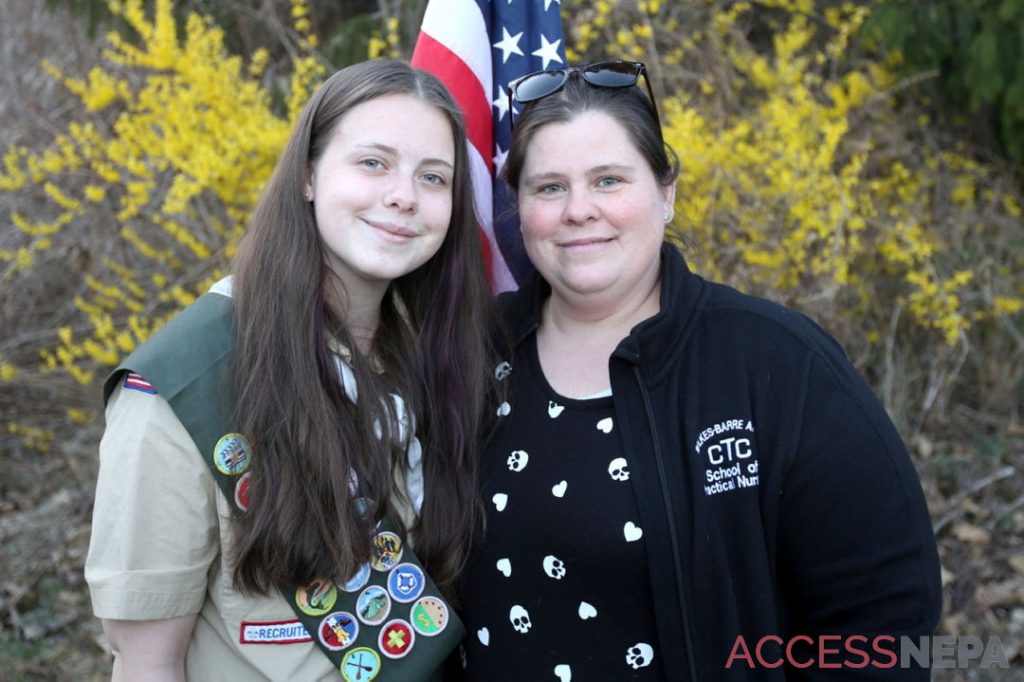 JAKE DANNA STEVENS / STAFF PHOTOGRAPHER
Emily Calder, left, was the first girl in the Northeastern Pennsylvania Council, BSA, to earn the rank of Eagle Scout. Her mother, Sara Calder, right, said that when her daughter sets her mind to things, “she doesn’t stop until she does it.”

To earn Eagle rank, scouts must meet several requirements before turning 18, and because of their ages when they joined, that meant some of the girls had to work quickly. Thanks to the pandemic, many merit badge avenues were unavailable, so scouts had to do the work online.

“I feel like I learned so many new things through the merit badges,” Emily said. “I didn’t know half of the things for life-saving or first aid before that. They’re really educational, and then (with) the paperwork aspect of it, I’m one of those people where I like answering questions.”

Angelina also had “a really fun experience of learning how to do things that could help you in real-life situations.” She, Emily and other scouts called on those lessons in August when they rescued a woman from under a moving tractor at Keen Lake in Wayne County.

“It was just the perfect timing that we were there, and … I was very proud that I was able to go and be there and help her in time,” Angelina said.

Scouts hoping to become Eagles must do a community service project that involves “planning and carrying things out and giving leadership to others,” said Dave Srebro, NEPA BSA council camping and program director. Emily worked with the nonprofit Christians on a Mission to collect and distribute items to local people facing homelessness.

“The more time I sat and thought about it and met with these people and talked to them about it, I realized the homeless community, they’re really pure people,” Emily said. “They’re so grateful for everything you do for them. … It was so heartwarming.”

The community donated enough blankets, clothing, shoes and bags to fill the trunk of Emily’s family’s Suburban. And she continues to collect items “because it really sat with me that these people really have nothing,” she said.

“I honestly wish there was more that I could do,” Emily said.

With the help of other scouts, Angelina built senior care boxes for Julia Ribaudo Extended Care Center near Lake Ariel in October. While video chatting with her grandmother, a nursing home resident, Angelina saw the pandemic’s impact on residents, who couldn’t see loved ones or do activities.

“Her nursing home also got really hit hard with COVID, and I thought it would be an amazing thing if I made her a care package and gave her some activities to do and pass time,” Angelina said.

She enjoyed seeing the smiles it brought to the faces of residents, who “thought it was just amazing that someone would be thinking of the elderly in a time of need.”

To earn her Eagle rank, Kyleen built two instrument shelves for the band room at Riverside Junior-Senior High School, where she and her fellow band members didn’t have storage. Fellow scouts helped with the project in February with wood donated by Home Depot.

“I feel they have given me so much that I’m happy to have given something back to them,” Kyleen said of the band. 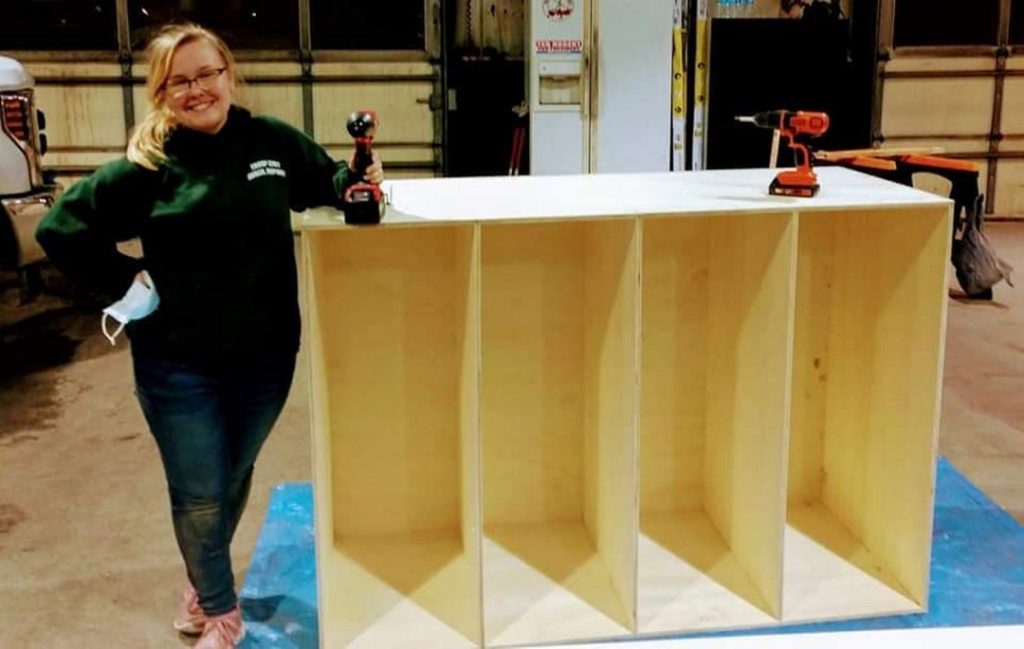 Because of the pandemic, scouts recently up for Eagle rank met with the review board via video chat. Emily faced three women and a male minister during this “absolutely nerve-wracking” experience. When they told her their decision, the minister cried.

“He’s like, ‘I’ve just waited so long to be able to tell the first girl that she got her Eagle,’” Emily recalled. “He started choking up when he was giving me the oath.”

While she wasn’t surprised she was able to make Eagle Scout because she had confidence in herself, Emily felt shocked to know she was the first girl to earn it in NEPA.

“Emily sets her mind to things, and she doesn’t stop until she does it,” said her mother, Sara Calder.

Angelina earned her Eagle Scout rank at 14 and knows her dad, Jim Krug, felt proud of her.

“It was just phenomenal,” he said. “She’s heard all my (scouting) stories growing up and what we did, and as a family we did a lot of camping with the kids. … And as soon as girls were told that they could join Scouts, she joined up and followed my footsteps and made (Eagle) a lot quicker than I did.”

“I know that she’s going to do something important in life,” Angelina’s mom, Suzanne, said. “I don’t know what it is yet, but it’s going to be something big.”

Heather Bird praised her daughter for her scouting achievements, which Kyleen managed while also attending school, participating in district band and working during a global pandemic. If Kyleen had free time between classes, she’d work on another project instead of just relaxing, her mom recalled.

“She worked so hard, and it was so difficult with COVID because she couldn’t go to these merit badge counselors,” Heather Bird said. “She had to do everything online, and she had to go off their time frame. … I can’t believe she actually did it.”

Seeing the girls focus their energies and work hard was exciting, Srebro said.

“It’s been a real treat to see some of these young ladies who were really anxious to be be part of that club, if you will, or that elite group of young people who’ve met that (Eagle) achievement,” he said. 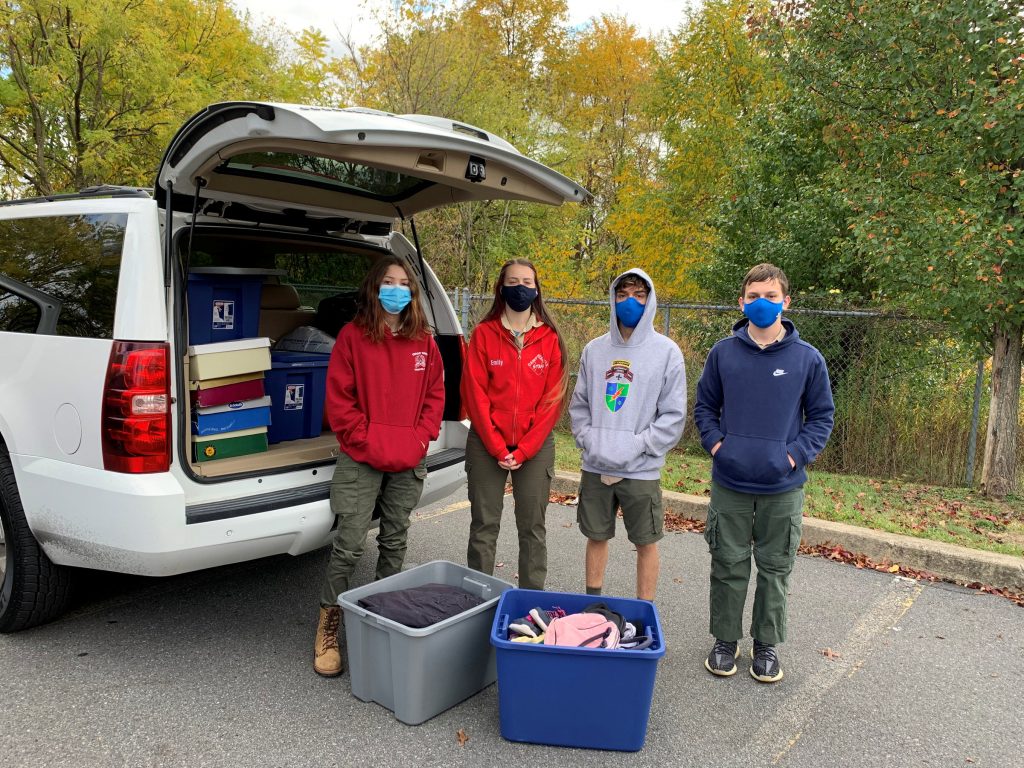 The decision to allow girls into Scouts led to some backlash, and although Emily said she felt welcomed in BSA, she also encountered some negativity and hostility. Still, she added, the girls who stuck with the program love it a lot. It even became “like a second family,” Emily said.

Srebro said welcoming girls has not “been like a shock to the system” because scouts offered coed programs like Venturing for a long time. Now, Cub Scouts has co-ed packs, while Scouts BSA has single-sex troops.

Suzanne Krug, Angelina’s mom, saw the impact the girls and their hard work had on the doubters.

“Being her parent, I’ve seen some people that are involved in Boy Scouts that weren’t happy about (girls joining). But … I’ve seen people who were so against it change their views,” Krug said.

There may have been some pushback against girls joining, but Jim Krug believes the program, its values and lessons are good for kids no matter who they are.

“It’s great that the girls can have the same program as the boys. … From the day she signed up, she put her mind to being one of the first (girl Eagle Scouts), and so we just encouraged her,” Jim Krug said. “And (she) had a scoutmaster that was on board with the program and was able to enable to her to do it.”

The girls realize how much they grew in the process, too. Angelina, who has dyslexia, found reading and public speaking a challenge but also helpful.

“It even helped me in school,” she said. “My grades got even higher for learning how to do certain things. Some of the badges, it helped me with my dyslexia. I was able to think a lot (more) clearly and be able to talk to people a lot more easily.”

Kyleen, who plans to attend Mansfield University for music education, feels scouting helped her with time management and leadership skills.

“I’ve definitely become more outgoing than before and been able to talk to more people than I ever have,” she said. “I never would have done that if it wasn’t for Scouts. … It’s opened me up to being a better person.”

Watching Kyleen grow from a shy person without leadership skills into someone capable of leading adults and kids alike as she completed her project was amazing, Heather Bird said.

“(I’m) honored to know that she’s become such an amazing adult,” she added.

Emily believes girls interested in Scouts BSA should definitely give it a try.

“It’s not going to be for everyone,” she said, “but you’re never going to know if it’s for you if you don’t give it a shot.”