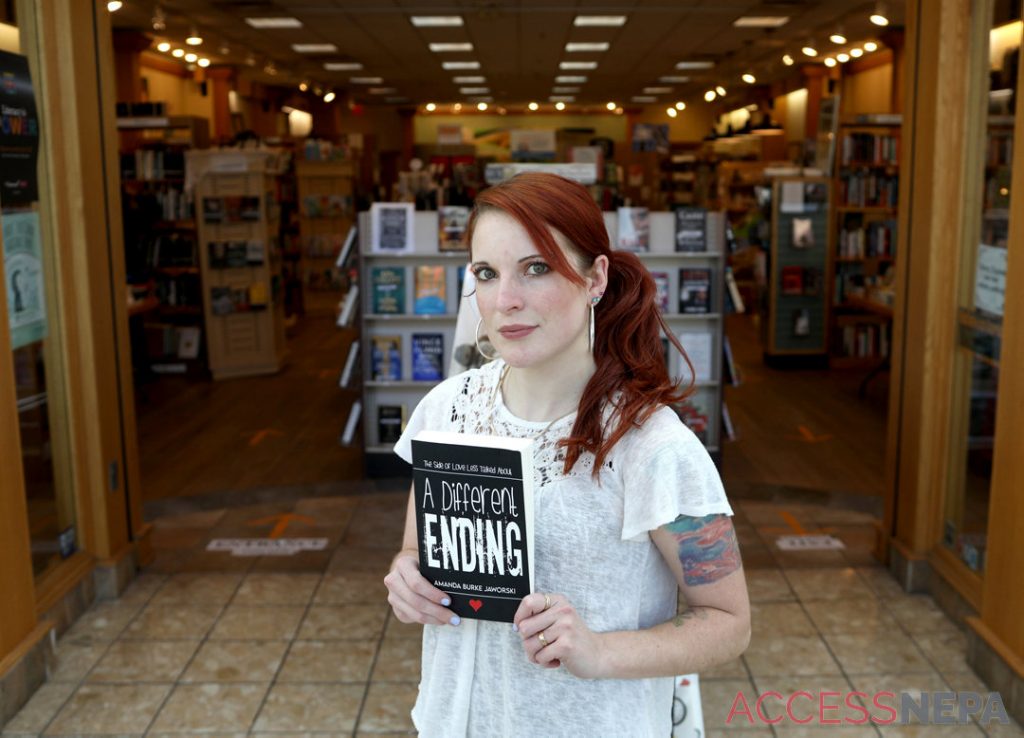 Local author shares experience with domestic abuse to help others

Amanda Burke Jaworski melded her passion for writing and her own life experiences in her literary debut.

An avid writer since she could first hold a pencil and an equally voracious reader, the Scranton resident dreamed of a writing career since she was a young girl at Robert Morris Elementary School in the city’s Green Ridge section, where she was encouraged to participate in writing contests. Jaworski said her passion for writing also was supported by her family.

“I was always writing, I think because my parents and grandparents were so excited by what I did that it really fueled the fire of what I was doing,” Jaworski said, who lives in the city with her children Alexa Rain, 9, and Joseph Gannon, 5, and her husband, Joseph Jaworski. “It felt like having a magic power.”

As she grew older, her love of writing persisted and developed into a dream to study journalism in college and become a professional writer. However, her life was redirected when she discovered she was pregnant and her boyfriend at the time became abusive.

“He became very controlling in the sense … the character does in the book,” she said. “And it turned into a lot of verbal abuse and mental abuse,” Jaworski said. “I think when you’re so young like that and moving into your first apartment together, you have the stress of bills and a child and the stress to maintain life as an adult when you’re not really mature enough to do so. And I think the lack of experience in dating kind of heightens these abusive relationships a little bit.”

Throughout the hardships she faced, Jaworski relied on her love of writing as a way of coping with her experience.

“Writing gave me that outlet where … I didn’t feel judged,” she said. “Luckily, I have a really supportive family. I always had that support. But even though I knew they would be there for me and help me through everything, I think when you’re in an abusive relationship you kind of feel like you’re failing your family, so writing really gives you that outlet where you don’t have to voice everything to people, where you don’t have to feel judged, but at the same time you can get that out there.”

The reader may see this displayed in Jaworski’s book, “A Different Ending,” which is available on Amazon and at Library Express at Marketplace at Steamtown, second floor, 300 Lackwanna Ave. It follows 19-year-old Aliza as she and her boyfriend, Tyler, move into their first apartment together. Childhood friends, the pair believe they know everything about each other until Tyler turns abusive toward her.

While this is her first published work, Jaworski said it was not the story she initially intended to write.

“(It) seemed like the most genuine thing I could write, as far as feelings go, because I did go through this and it wasn’t very complicated to put into words and I used my experience as a foundation to create a fictional story from,” she said.

“I feel like if people feel more supported and understood (then) maybe we could normalize these conversations that are hard to have and hopefully lessen the victims in a situation like this and other drastic things going on,” she said.

In addition to starting discussions, Jaworski hopes readers learn from her experience to improve their lives, which involves taking inventory in what loved ones notice about their relationships. The most important thing someone can do in an abusive relationship is stay close with their family as loved ones are more likely to catch on to the abuse quicker.

“I know sometimes in that situation you might think they are just being judgmental of the person you’re with,” she said. “But really take that into consideration and listen to the things they notice so do not be ashamed to ask for help, a lot of people like to keep this as a hidden thing that happens behind closed doors and that’s when it tends to escalate into physical abuse, and unfortunately, it can mean death.”

She reiterated the importance of getting help, citing that leaving an abusive relationship is the most dangerous move a person in that situation can make aside from staying in the relationship. While some people may feel judged, embarrassed or afraid to ask for help, or they don’t have a strong support system, there are plenty of community programs they can utilize.

In addition to writing, Jaworski earned an associate degree in early childhood education and development from Purdue University, and works as a home child aid. Also, she works in graphic design for Jaworski Sign Company in Scranton and had the chance to design the 2019 billboard for the Mom Prom of NEPA, which was held to benefit the Victims Intervention Program of Wayne and Pike Counties.

Throughout her journey, though, Jaworski said it was important that she continue to pursue writing, chasing her childhood goal.

“As a teen mother, having to put my plans aside regardless of the support I had (from my family), I knew it was important to follow my dreams in order to lead by example for my daughter and my son,” she said. “It is never too late to work on things that bring you joy, success and happiness.”