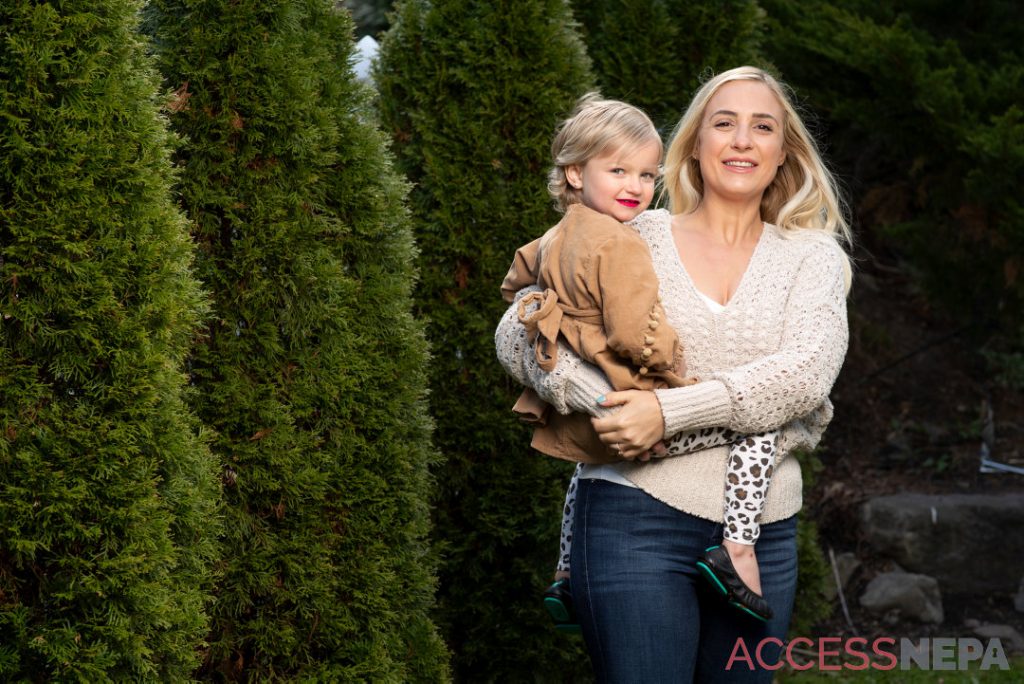 Lifeline of love: Nurse does ‘whatever it takes’ to nurture daughter battling cancer

The registered nurse was at work at Wilkes-Barre VA Medical Center when the phone rang just before Christmas 2018.

“It was awful. … I just knew as soon as I saw the doctor calling,” Marissa recalled. “I just knew. I sat down because I was like, ‘This is not news I wanted to hear.’”

The doctor on the other end said what no mother wants to hear: Marissa’s 2-year-old daughter, Vivienne Budzyn, had leukemia, and Geisinger Janet Weis Children’s Hospital in Danville had a bed with her name on it.

Since then, Marissa has stood by Vivienne’s side as the toddler endured months of chemotherapy. She shaved Vivienne’s head when her beautiful blonde hair began falling out. And she remains there as a source of strength and hope as each day brings them one step closer to the end of treatment and the beginning of the rest of their lives. 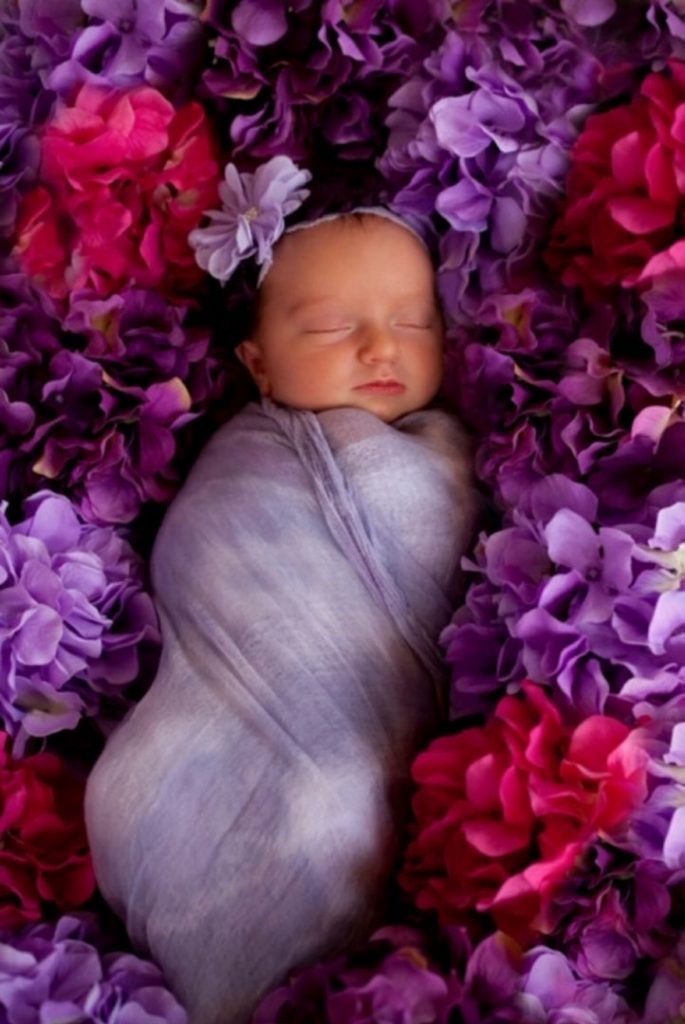 SUBMITTED PHOTO
Vivienne Budzyn shortly after her birth in March 2016

‘The best thing ever’

Motherhood wasn’t a job Marissa had expected to take on. But after the Luzerne County native met her future husband, Vince Budzyn, in early 2013, her view changed.

“She didn’t want kids when we first got together,” Vince recalled. “She knew I did. And I’m very close to my family, and just seeing how she was with my nieces and nephews, I knew she’d make an awesome mom.”

“Eventually he did change my mind,” Marissa said, adding, “it’s the best thing ever.”

When she got pregnant in 2015, Marissa hoped for a girl and couldn’t believe it when she learned at their gender-reveal celebration that her wish had been granted.

After a complication-free pregnancy, the Budzyns learned a few weeks before their due date that their daughter was in breech position. Unable to turn the baby the correct direction, doctors delivered Vivienne 10 days early on March 18, 2016, via C-section.

“When we finally go to meet her, it was the best,” Marissa said.

As it does for most new moms and dads, the sleep loss of the ensuing weeks caused some stress, but Marissa enjoyed the time she had to bond with her baby girl.

“It was great when I was on maternity leave,” she said. “I loved every second of being with her, and when I had to go (back) to work, I was just so devastated.” 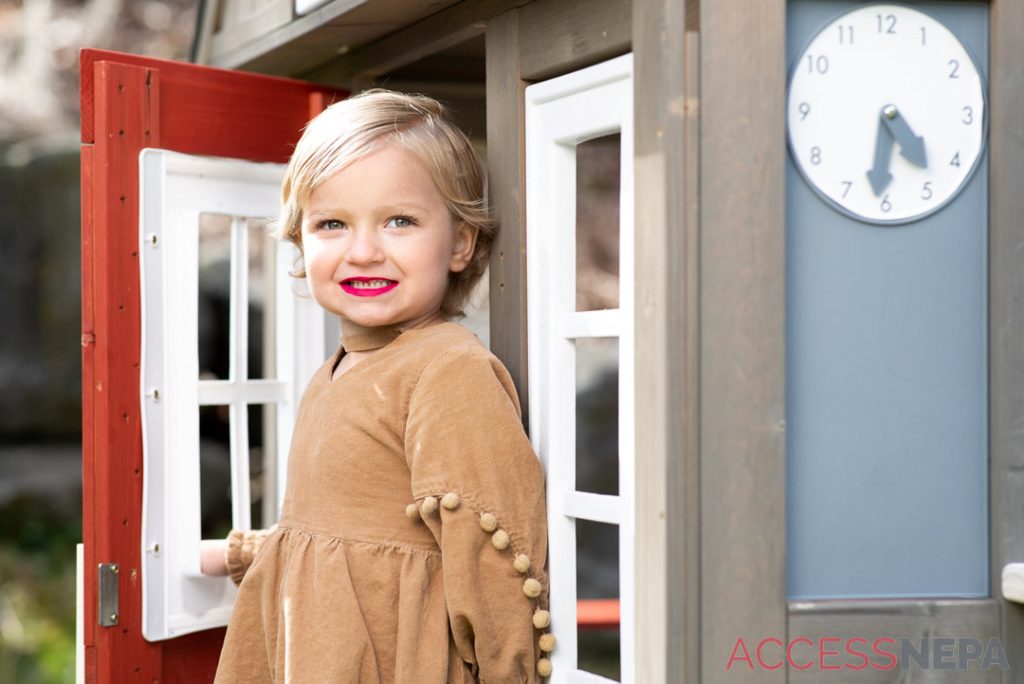 For a couple years, life went about normally for the Budzyns. But then signs pointed to a problem.

“(Vivienne) started off with having just bruises, and she was tired, and she had an ear infection,” Marissa recalled. “And she was running these low-grade fevers for like two weeks.”

Doctors had put the then 2-year-old on an antibiotic, but it didn’t seem to make a difference. Armed with her nurses’s — and mother’s — intuition, Marissa took her daughter back to the doctor, who sent her for blood work.

And then the call came about the leukemia, and Marissa headed home from work and started packing for that first hospital stay, which lasted 10 days. Doctors installed a port through which Vivienne would receive chemotherapy, which then became infected and caused her to run a fever. Eventually, Vivienne underwent intensive weekly chemotherapy for nine months.

After the diagnosis, Marissa quit her job to stay with Vivienne through treatment. She said she learned from her own mother, Jeanine Marino, that moms “do whatever it takes for your children.”

“When it came to quitting my job when she was diagnosed,” Marissa said, “I was afraid of what was going to happen, but my mom was like, ‘You’ve got to do what you’ve got to do,’” and even offered to let Marissa and her family move in if they needed to.

Now in remission for more than a year, Vivienne takes a chemotherapy pill every night, something she will do until March of next year because leukemia has such high rates of relapse, Marissa said. Vivienne continues to make trips to the Danville hospital and has to go to the emergency room whenever she spikes a fever. 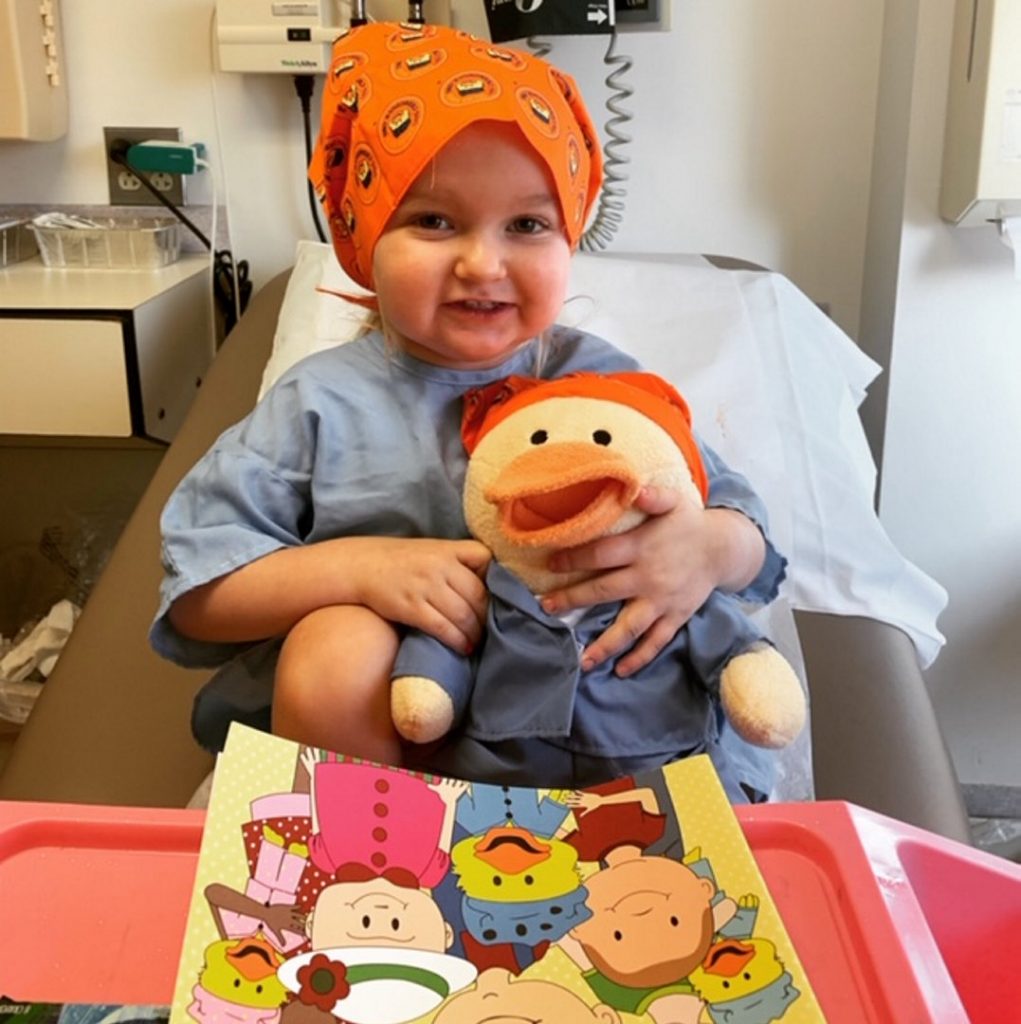 While having a nursing background meant she probably drove her husband crazy about worrying over everything during Vivienne’s treatment, Marissa said with a laugh, it also helped her talk to the nurses and other parents they met as well as keep Vivienne healthy.

When faced with this kind of situation, though, Marissa said, “you just have to roll with it.”

“As far as just being a nurse and knowing all the side effects and all the possible stuff that could happen, it was rough on me,” Marissa said. “But seeing her happy and healthy and acting perfectly fine even when her blood levels were so low (that) she had to go and get two transfusions, just seeing her in good spirits was great.”

Now 4, Vivienne understands what she has had to endure and remembers everything, Marissa said, especially being in the hospital and losing her hair.

“Probably just the hardest thing was kind of just going through the tough chemo that knocked her immune system down to nothing and dealing with her hair falling out, because that was a huge deal for her,” Marissa said.

Vince Budzyn said his daughter grew even closer to Marissa during treatment.

“She’s an awesome mom,” he said of his wife. “I would say her and Vivi are like best friends. They literally do everything together. Vivienne doesn’t leave her side.”

It’s a close relationship he has noticed before in their family.

“I think (Marissa) gets some of that, too, from her mom,” Vince said. “Marissa and her mom are the same way (as) Vivi and her mom are; they’re connected at the hip. Anything that’s going on in Marissa’s life, if she needs advice other than mine, she goes to her mom. … She just kind of mimicked the way she was (raised).”

Marissa described her daughter as an awesome, animated kid who’s not quiet for a second unless her big blue eyes are watching something on a screen. And, Marissa said, Vivienne is “100% girly girl.”

“She’s very entertaining all day long,” she said. “She’s constantly going and dressing up in princess dresses, and she’s like a little 30 year old. She’s always doing her makeup every day. It’s like a salon in our house.”

Despite all the treatments and side effects she had to endure, Vivienne’s bubbly personality has never changed.

“You would never even know (she was sick),” Marissa said. “She’s just full of energy constantly. I have to give her melatonin every night to help her go to bed. She has tons of energy.”

While Vivienne pointed to coloring as her favorite thing to do with her mom, there’s something she loves even more about Marissa.

“Her face, because she’s so pretty,” Vivienne said. 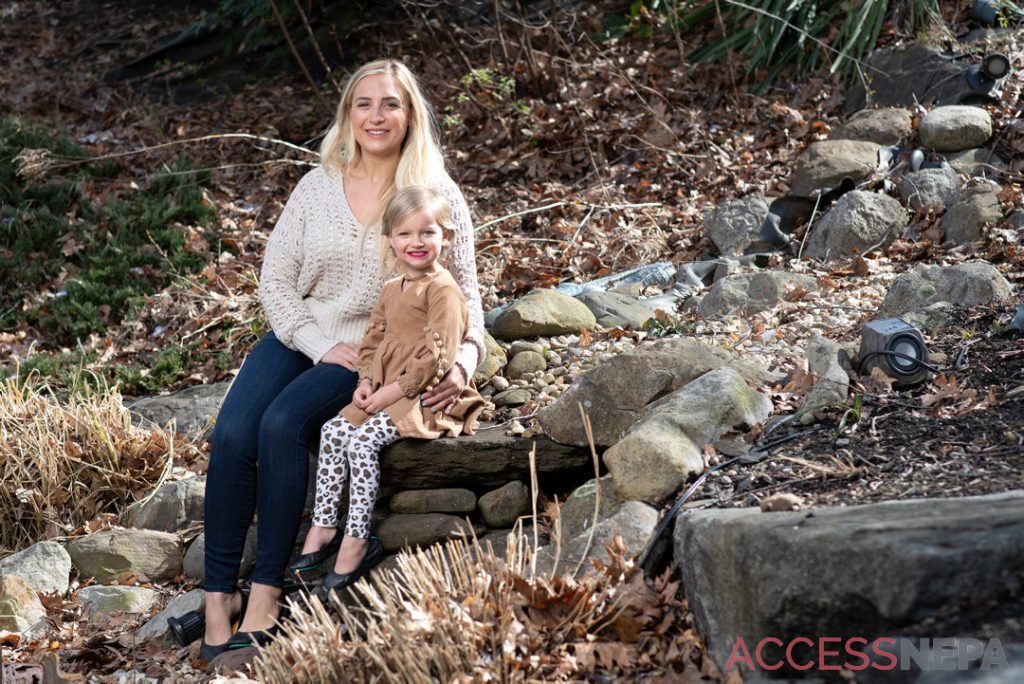 CHRISTOPHER DOLAN / STAFF PHOTOGRAPHER
Marissa Budzyn and her daughter, Vivienne, at their home in Laflin

The Budzyns must remain cautious when it comes to the coronavirus because of Vivienne’s compromised immune system, but they’re used to quarantining.

“It’s not really a big change for us because we’ve kind of been quarantined since she was diagnosed,” Marissa said. “All of last year when her immune system was down, we had to take every precaution.”

Even though she can’t play with her cousins or attend gymnastics classes, which doctors just cleared her for in January, Vivienne can at least grab her scooter and go for a ride outside. And her parents are using this time at home to teach her to do chores.

“We cook together,” Marissa said. “She’ll help me wash the dishes, but she … likes just sitting around, even me telling her stories.”

“Obviously, Vivienne was close with her mom before this whole thing started, but since the treatments, Vivienne has looked at Marissa for everything,” Vince said. “And Marissa stepped up … and she takes care of her and all her needs.”

He laughed about how he sometimes literally has to force situations where he can spend time with his daughter.

“We have daddy-daughter days because I need time to get with Vivienne. … It’s very few and far between because she just wants to be with mom,” Vince said.

That means Marissa Budzyn has had to make a lot of sacrifices in terms of dedicating time to herself, he added. But even so, Vince said, “she wouldn’t have it any other way.”

“Quitting my job and being a stay-at-home mom’s one good thing out of all of this,” Marissa said.

She eventually plans to go back to work, still in health care but in a different capacity. Marissa has returned to school to become a family nurse practitioner and hopes to work in a practice or possibly with children’s oncology.

“This whole thing just inspired me to just go back to school,” she said.

In the meantime, the Budzyns have been able to look ahead to Mother’s Day. They won’t get to spend today with extended family thanks to the coronavirus, but Marissa, Vince and Vivienne will find other ways to celebrate.

“Hopefully the weather will be nice and we can go outside,” Marissa said. “She likes to be outside.” 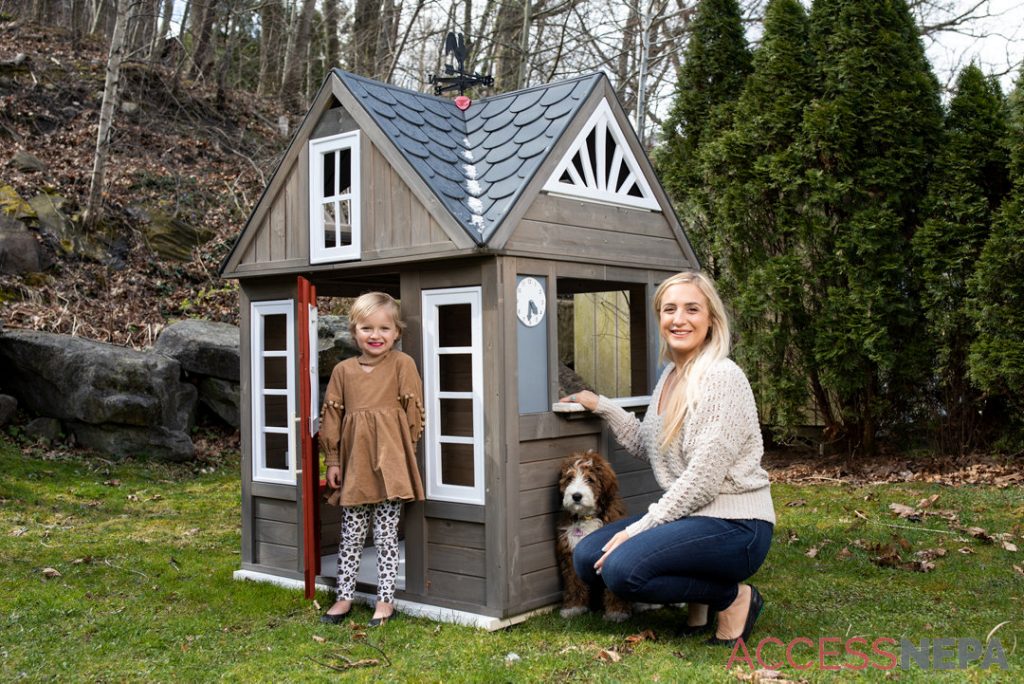 CHRISTOPHER DOLAN / STAFF PHOTOGRAPHER
Marissa Marino Budzyn and her daughter, Vivienne, with their dog Delilah at their home in Laflin 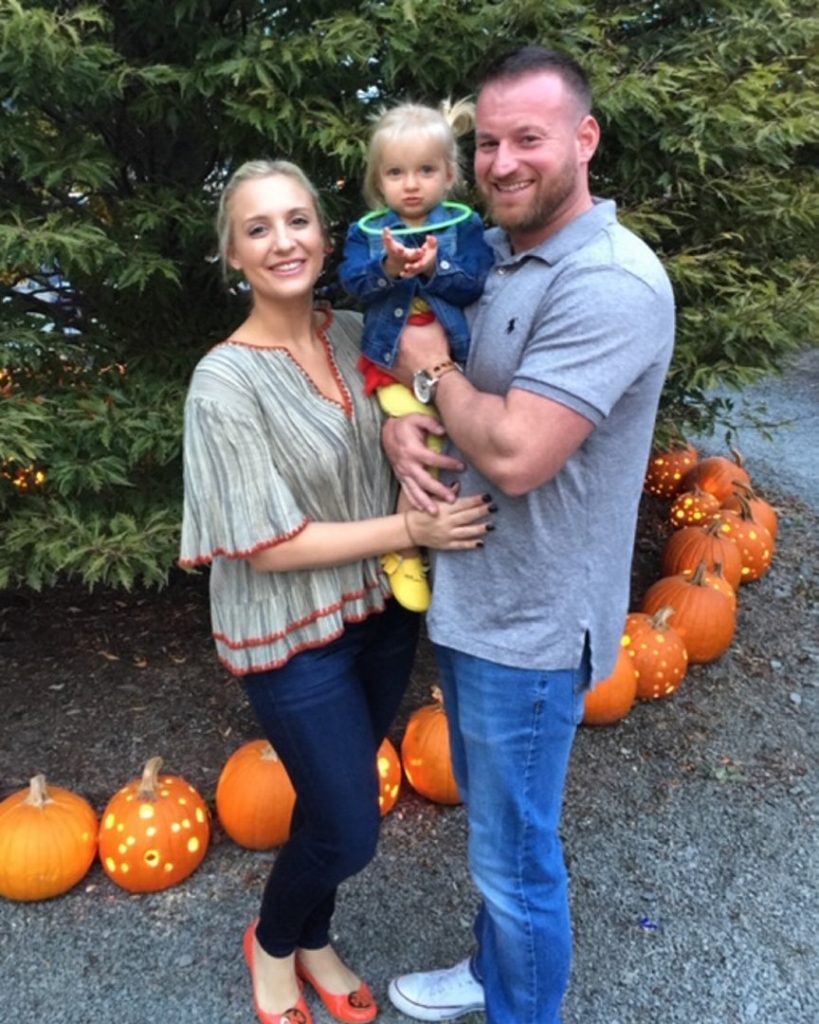 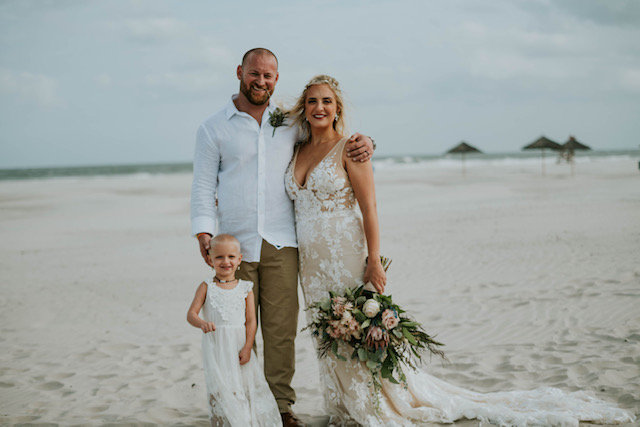 SUBMITTED PHOTO
Vivienne Budzyn with her parents, Vince and Marissa, on their wedding day.

For information about leukemia, treatment, support groups, resources and more, or to donate, contact the Leukemia & Lymphoma Society’s Eastern Pennsylvania Chapter at 610-238-0360 for the Philadelphia office or 610-266-8513 for the Lehigh Valley office. Or, visit lls.org/eastern-pennsylvania.