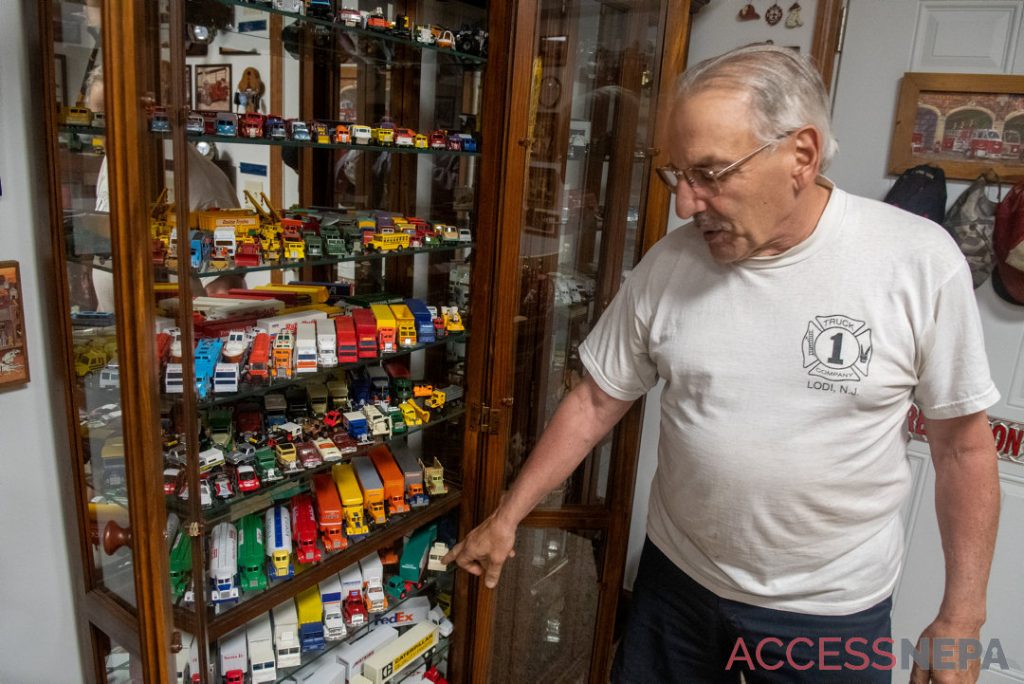 Lake Wynonah man’s love of trucks shines through in collection

After the bodies were removed from the rubble, only the ax was left.

Peter Rinaldi Jr., a volunteer fire engine driver in Lodi, New Jersey, found the ax in the ruins of what was once a chemical plant. The plant burned to the ground, killing four men instantly and leaving one severely burned. The burnt man, his skin blackened, sat next to Rinaldi and held onto him. He died in the hospital five days later.

In memory of those claimed by the fire, Rinaldi took the ax, restored it and now displays it in the living room of his Lake Wynonah home. It hangs next to the TV, underneath a framed copy of “The Fireman’s Prayer.” Sitting on his sofa, Rinaldi, 70, holds a photograph of the fire. He wipes the dust away with his finger.

“That was stuck in my mind,” he said. “He looked like toast. It really makes you think about, at any time, any second, any minute, you can be killed. In a situation like that you have to use your head.”

The first floor of Rinaldi’s house is practically a museum that tells the history of firefighting, from horse-drawn carriages to the full-size 1980s fire engines that reside in a custom-built garage. The garage also holds all of the trophies the two engines have won at various events. His collection hearkens back to a time when, as he puts it, “men were men” and had to operate heavy, low-tech equipment to save lives and put out fires.

Every two months, Rinaldi opens his glass cases and individually cleans his 1,000 miniature firetrucks with a paintbrush. Rinaldi has plates, statues, posters, patches and even a fire engine-themed cuckoo clock. On either side of his sofa are two lamps he made out of old fire extinguishers. A jigsaw puzzle of firetrucks draped in American flags hangs on his bathroom wall. His mailbox is shaped like a firetruck. His fire memorabilia is his prized possession — except for his daughter, Katherine.

“It’s definitely grown over the years,” said Katherine, 30, about her dad’s memorabilia. “It felt normal, but it definitely wasn’t normal.”

She remembers having to tell her friends not to play with Dad’s trucks.

“I’m not into sports,” said Rinaldi, 70, “not into anything but trucks. I always loved trucks and firetrucks, so I just fell right into it.” 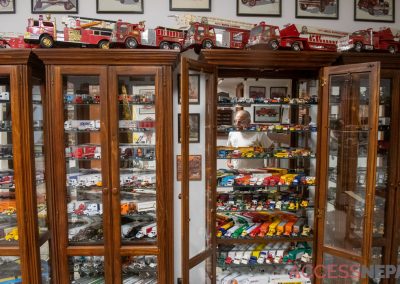 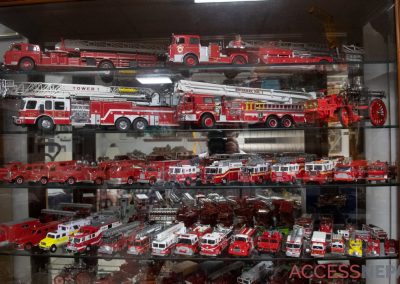 DAVID MCKEOWN / STAFF PHOTOGRAPHER
Firetrucks line a shelf at Peter Rinaldi Jr.’s home. Every two months, he individually cleans all of his trucks with a paintbrush. 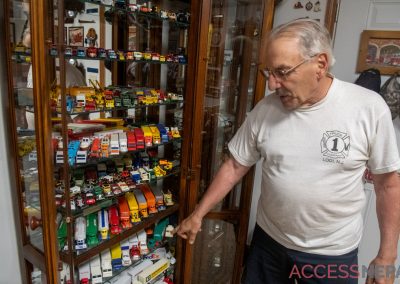 DAVID MCKEOWN / STAFF PHOTOGRAPHER
Peter Rinaldi Jr., of Lake Wynonah, began collecting toy firetrucks when he was a child and now has more than 1,000 trucks, cranes and fire-related items. 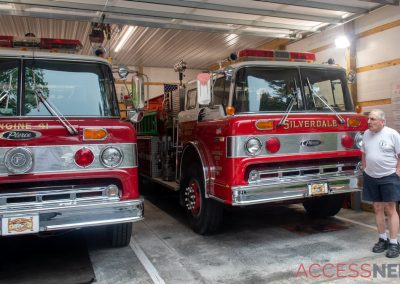 DAVID MCKEOWN / STAFF PHOTOGRAPHER
Peter Rinaldi Jr., of Lake Wynonah, looks over his two 1980 Pierce engines in his custom-built garage, which also holds all the trophies the engines have won. 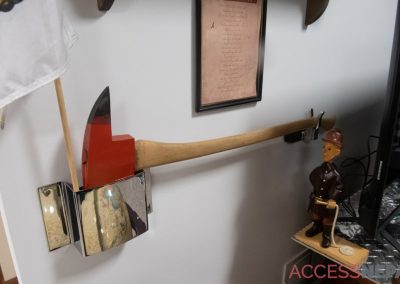 DAVID MCKEOWN / STAFF PHOTOGRAPHER
Peter Rinaldi Jr. found this ax in the ruins of a chemical plant fire in Lodi, N.J., that killed five men. In honor of those men, he restored it and now displays it in his home. 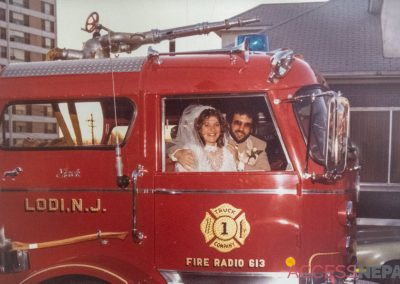 SUBMITTED PHOTO
Karen and Peter Rinaldi Jr. pose for a photo on their wedding day in February 1980 in a 1968 Mack firetruck. 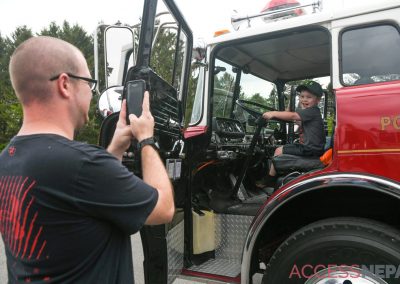 Rinaldi is a trustee of the Schuylkill County Historical Fire Society, based in Shenandoah. He moved to Schuylkill County from New Jersey a decade ago, not even knowing that he was moving to a place where firehouses are central to community life.

“I love the country,” he said. “I couldn’t take the taxes anymore in Jersey and this was a nice quiet place to move to. I saw these fire trucks and said, ‘Oh my God I’m in heaven.’ “

He started collecting toy firetrucks when he was a little boy in Lodi. His uncle was a firefighter, and his uncles and grandfather had a shipping business. He became a truck driver for Fed-Ex and volunteered with a local fire company.

He met Karen, the woman who would be his wife, thanks to his friends in the firehouse. On their wedding day, they left the church under an arch of fire axes. Several towns’ fire companies came to see them, and Rinaldi drove Karen to the reception in his beloved firetruck.

Karen helped Rinaldi build his collection, too. Every birthday and Christmas she would give him a toy firetruck. He would give her a Hummel figurine to add to her own beloved collection. Karen died in 2002, and Rinaldi displays her figurine collection on the second floor.

Rinaldi has thought about what will happen to his collection after he dies. Along with the trucks, he has collected the business cards of many toy manufacturers for when the time comes.

“It’s not worth anything to the common guy that walks down the street,” Rinaldi said, “only the enthusiast. Anything with a truck comes natural to me. I guess because I have the love for what I do.”