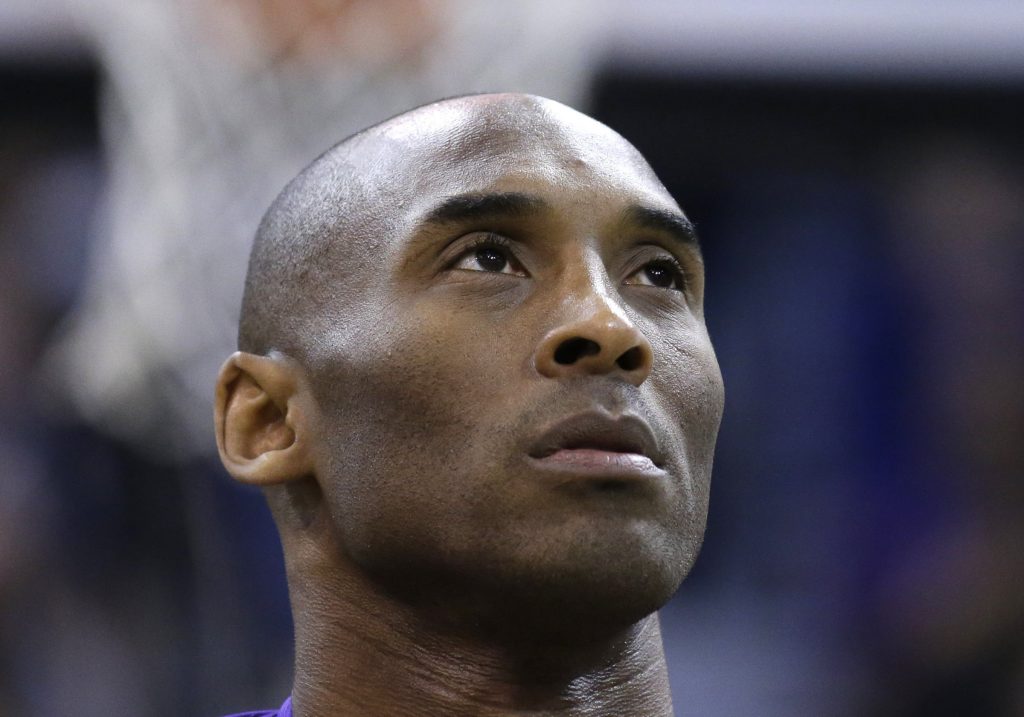 Kobe Bryant had the playoff game in his hip pocket.

Time was winding down, the teams were tied and a packed house stood on its tippy toes, fidgeting to see what the basketball superstar would do next as he stood at the top of the key with the ball in his sure hands at his side.

No, the scene wasn’t the Staples Center in Los Angeles; nor was Bryant wearing a mesh, gold-and-purple Lakers jersey; nor were the opponents the San Antonio Spurs or Boston Celtics.

This was March 15, 1995 at Liberty High School in Bethlehem, where Bryant and his Lower Merion Aces met Hazleton Area in the PIAA Class 4A Eastern quarterfinals — a thriller remembered after news of Bryant’s tragic death in a helicopter crash near Los Angeles on Sunday quickly spread through the local basketball community.

Bryant was looking to cap his team’s rally from a late seven-point deficit against Leib’s Cougars that night. He was trying to add to his 33-point total — a basket that would send the Aces into the next round of the state tournament and send Hazleton Area home.

Bryant finally made his move toward the hoop around the 5-second mark, when Cougar defenders Terry Kringe, Ryan Leib and Jason Potten collapsed around Bryant and teamed to poke the ball away from him.

Kringe eventually got it and fed it to Ryan Leib, who was racing down the court at breakneck speed in an attempt to beat the buzzer, However, Leib’s layup clanked off the back of the rim as the horn sounded.

With Kringe scoring four points and the younger Leib adding a free throw, Hazleton Area pitched a 5-0 shutout in the extra session to win 64-59 and eliminate Bryant and the powerful Aces.

In overtime, the then 6-foot-6 junior turned the ball over three times and missed both of his shot attempts.

“He was an awesome high school basketball player, but much better as a senior,’’ Bruce Leib said. “As a junior he seemed more content to shoot from 22 to 25 feet. … When he would go inside, we’d have three guys around him and we still couldn’t stop him. We actually liked him shooting from the outside because we couldn’t stop him inside. I thought that’s what might have gotten him against us in the end.’’ 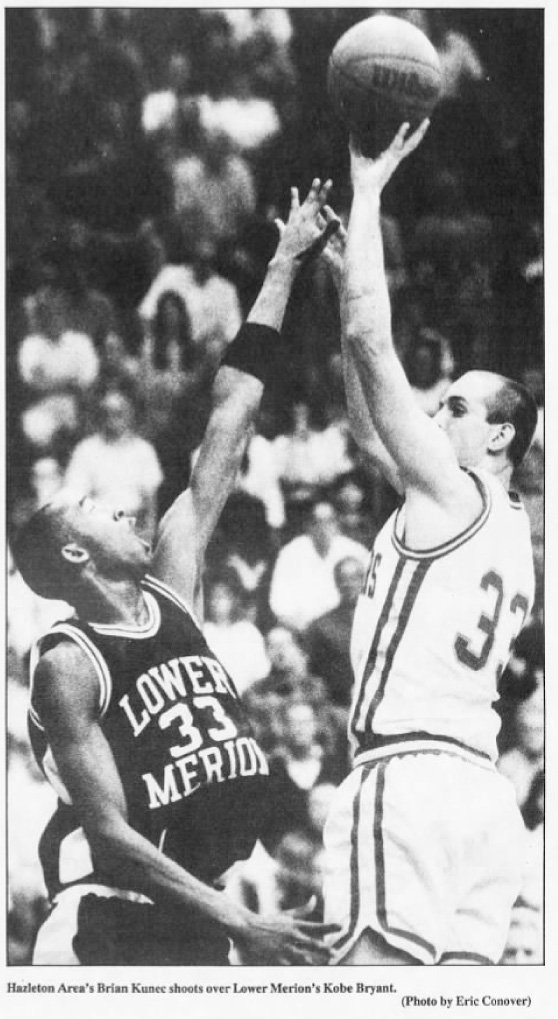 ACCESS NEPA FILE
Hazleton Area’s Brian Kunec puts up a shot over Lower Merion’s Kobe Bryant during their PIAA Class 4A Eastern quarterfinal on March 15, 1995, in Bethlehem. Bryant, who went on to become a superstar with the NBA’s Los Angeles Lakers, died in a helicopter crash near Los Angeles on Sunday.

The loss was the last in Bryant’s sensational high school career, as he led the Aces to an undefeated record and the PIAA Class 4A championship as a senior the following year. Included in that run was his 52-point performance in a state playoff victory over District 11 champion Stroudsburg, a Martz Hall scoring record since broken by Bishop Hannan’s Gerry McNamara.

“I honestly don’t remember a single thing that happened in overtime (against Hazleton Area),’’ Michael Egan, a Lower Merion assistant coach at that time, said in a Standard-Speaker retrospective on that game in 2008. “I will, however, never forget the locker room. It was the quintessential high school experience as each of the kids spoke a few words: kind words, sincere words, grateful words.’’

The last Lower Merion player to speak that night was a player who would skip college and embark on a Hall of Fame career less than two years later.

“Kobe tried to get a few words out, but all he could say was, ‘I’m sorry. I’m so sorry,’ ’’ Egan said. “I knew at that point in time that we would win the state championship the next year.’’

Before the night was over, Bryant forever earned the respect of the elder Leib and his players.

“The thing I remember most about the game was after the game,’’ Bruce Leib said. “Kobe’s father, (former NBA player) Joe ‘JellyBean’ Bryant, brought Kobe over to our locker room and made sure he congratulated each and every one of us. I’ll never forget that. That was his dad raising his son the right way and making he sure he congratulated us because I’m sure Kobe was devastated by the loss.’’

In biographies about Bryant, he has pointed to that loss as a source of motivation, not only for his senior year, but for the rest of his career.

A few months after the game, the hyper-competitive Bryant’s nature was on display when he met up with Kringe at a Sonny Hill League game in Philadelphia.

“I was shooting around with a couple of other players and we were talking and seeing where everyone was from,’’ Kringe, a first-team All-State selection in 1996, recalled. “Someone asked me where I played and I said, ‘Hazleton.’

“On the sideline dribbling a basketball was Kobe, and he heard what we were talking about. Kobe looked over and said, ‘Hazleton, I owe y’all one.’ I said, ‘We’ll see.’’’

While the Aces went on to win the state title the next March, Kringe and the Cougars lost in the first round of the District 2 tournament.

“We didn’t hold up our end of the bargain,’’ Kringe said.

But for one night in March 1995, the Cougars held tough against one of the NBA’s greatest players when it mattered most.

“I remember seeing Kobe at an Atlantic Cape Camp the summer before we played against them in the playoffs,’’ Bruce Leib said. “Terry Kringe and my son, Ryan, were on a team, and we drove down there for (a tournament). That was the first time I ever saw him play. He was just incredible, how great he was just on the asphalt court. He had like 50 (points) in a game and he just did everything.’’ 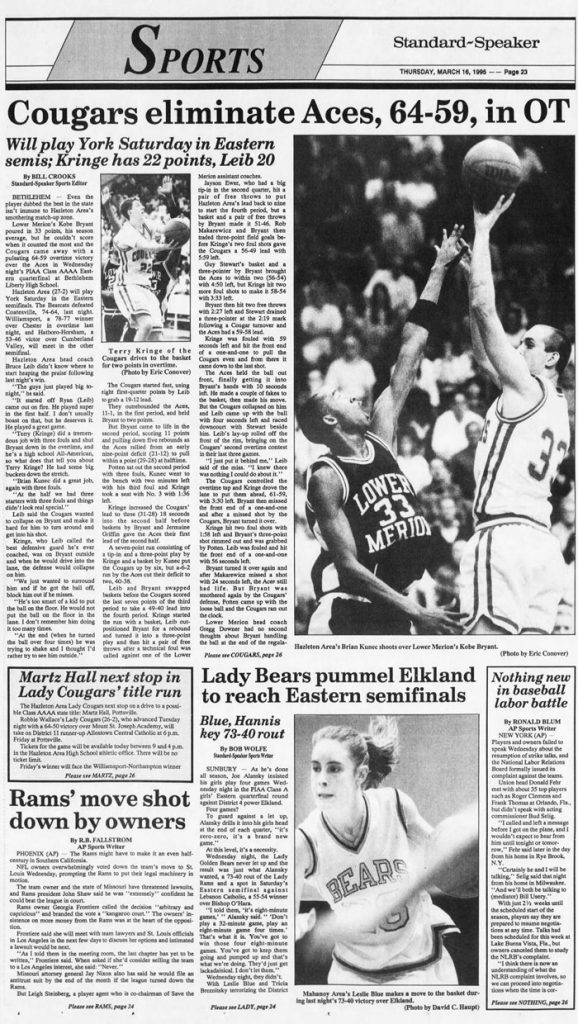 Bryant also did everything against the Cougars the following March — everything but beat them.

“That game, no question was one of my most memorable,’’ Leib said. “That whole year actually because of that one and then the York (game) after that. Beating a guy that was one of the greatest basketball players of all time and just having played against him … is something you treasure.’’

Added current Hazleton Area head coach Mike Joseph, then an assistant under Leib: “He was pretty amazing (on film). We didn’t realize what we were watching at the time. … Obviously, we knew that we had to focus on him and make other guys do it. … That’s what ended up happening. He got frustrated, but I think he learned a lot from that game.’’

Joseph took a few minutes at his team’s practice Sunday to showed his players a YouTube video of the Cougars’ win over Bryant and Lower Merion.

“For a lot of my guys, he’s their favorite player,’’ Joseph said. “They’re in shock. … I’m in shock. The first people I texted were Coach (Leib) and Chappy (former Hazleton Area assistant coach Jim Chapman). It’s like nobody could believe it. It’s just sad, sad, sad, sad.’’