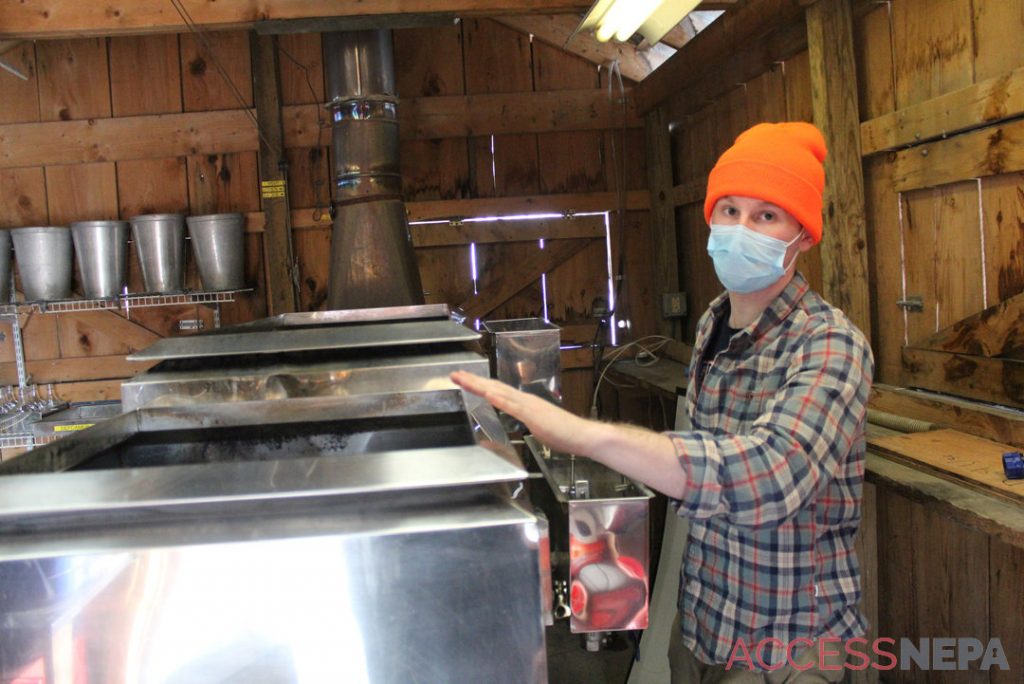 Keystone College’s Sugar Shack back up and running

A yearly, sugary tradition is starting up again at Keystone College. The Keystone Sugar Shack is up and running for 2021.

The Sugar Shack is a program run by Keystone that gives students experience with making authentic maple syrup from scratch using the hundreds of trees on Keystone’s campus.

Making maple syrup is a tough task because there is a very narrow weather window in which it can take place. There needs to be a good freeze/thaw cycle so the sap can properly flow. Keystone College senior wildlife major Joe Elias said that this is the perfect time of year for sap flow.

The conditions were perfect on Friday afternoon with sunny skies and a temperature of 42 degrees.

“When it’s in the 40s during the day and the 20s at night, those are perfect temperatures for the sap flow to take place,” Elias said. “We always tap all of the trees in the winter so the sap will flow down to the tank, and that process has begun.”

When the sap flows from the trees down into the tank, it is then pumped up into the boiler where the boiling process begins. The sap is then boiled into the sugary delicacy and bottled for consumption. It’s a process that takes a lot of work for the students.

“We’re usually working for about a month from when the sap starts flowing to when everything is wrapped up,” Elias said. “It’s usually eight hour days once we start boiling, but it’s a rewarding experience.”

It takes around 40 gallons of sap to make one gallon of syrup. The Keystone Sugar Shack usually produces between 40-60 gallons of maple syrup every year, going through around 1,600-3,600 gallons of tree sap.

“Even though it sounds like a lot, this is actually a small production,” Elias said. “This project is mainly for educational purposes, and it gives students like me a lot of good, hands-on experiences.”

Dr. Valorie Titus, Program Director of Wildlife and Environmental Studies at Keystone and advisor of the Sugar Shack, said that due to the pandemic, the Sugar Shack originally wasn’t going to open this year. The students changed her mind however.

“The students really wanted to step up and do it, so I said that I would supervise if they stepped up and did the work,” Titus said. “They have stepped up to get the shack up and running. It seems like every time that I drive up, someone is always here and doing something.”

The shack is usually run by students enrolled in the class Biology 108Q. The class was not offered this semester because of the pandemic, but Titus expects the class to be offered again in the future.

“We thank the kids for stepping up and volunteering to keep this going,” Titus said. “We hope to have the class back again next year when everything is hopefully back to normal on campus.”

Any Keystone student that is interested in sugaring and learning how to make maple syrup can volunteer at the Sugar Shack. Even in normal years, students who are not enrolled in the class can help volunteer.

“In my four years here, the program has grown a lot,” Elias said. “A lot of our helpers were volunteers who are just interested in the process. It’s great for all of the wildlife majors, because having lots of people betters the process.”

The Keystone Sugar Shack plans to be open as long as the weather cooperates to allow sap to properly flow.