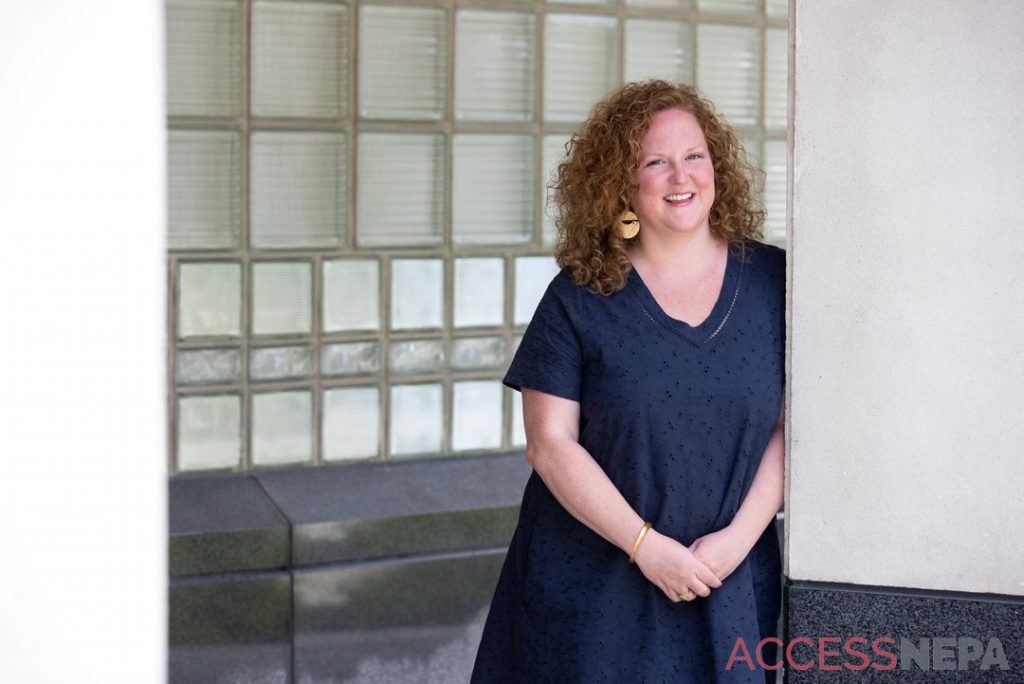 Thanks to her Jesuit upbringing and her work behind the scenes in the political realm, Alicen Morrison came to University of Scranton with lots of tools in her kit.

The Dunmore native, who now lives in Clarks Summit with her husband and two kids, had planned a much different career path, but her position as the university’s Schemel Forum assistant just fits, she explained.

After graduating from Scranton Preparatory School, the daughter of Attorney Joseph Murphy and the late Rosemary Murphy decided to continue her education at another Jesuit school, Fairfield University in Connecticut. Studying English, Morrison expected to one day work as an editorial assistant in New York City after graduating, even preparing for the gig with an internship at Seventeen magazine.

But when 9/11 happened not long after graduation, Morrison moved home to Northeast Pennsylvania re-evaluate where she really wanted to spend her life.

While she applied for jobs and grad school, Morrison heard then-Rep. Paul Kanjorski was looking to staff his campaign office, and she volunteered. Eventually, she was hired as a member of his staff, working in constituent services in Kanjorkski’s Scranton office, where she would help the people of his district with various needs and questions and also worked closely with his district office in Wilkes-Barre.

Morrison had found her niche, and when a job as a legislative correspondent opened in Kanjorski’s Washington, D.C., office, she shipped off to the nation’s capital, where she spent the next three years.

Morrison moved back to Pennsylvania while her then-fiance and now-husband, Jason Morrison, finished his master’s degree in Philadelphia, where she took an executive assistant job for a commercial real estate company. The couple had met while students at Scranton Prep — he was a year ahead of her — and eventually decided to relocate to NEPA.

“We knew we were going to start a family be married, and we wanted to be around our family and grandparents,” said Morrison, who then reached out to Kanjorski’s chief of staff to see if the office had any open jobs. “She said, ‘Do you want to start on Monday?’”

This new position, as deputy district director working out of Wilkes-Barre, gave Morrison a chance to travel throughout the congressional district and plus experience that served her well later on, including managing Kanjorski’s schedule and planning meetings, press conferences and events.

Morrison also continued to volunteer on Kanjorski’s campaigns, local “get out of the vote” initiatives, and other campaigns, including the John Kerry/John Edwards and Barack Obama/Joe Biden presidential bids. She even got to attend the Democratic National Convention in Boston, which she called a highlight.

When her daughter, Rose, was born in December 2010 and Kanjorski lost his re-election around the same time, Morrison was able to become a stay-at-home mom. A second daughter, Maeve, followed in 2015, and after a few years at home with both kids, Morrison began to feel like the time had come for her to go back out into the working world.

“I didn’t know if I was ready or not, and I saw this ad in the paper for the Schemel Forum, and I read the description and I thought, ‘This is perfect. I have to apply whether I’m ready or not,” she recalled.

Although nervous about going back to work, as soon as she stepped on campus, Morrison knew everything she had made the right decision.

The Schemel Forum offers various courses and other educational programs, such as luncheons and bus trips, to the public in topics ranging from politics to history to philosophy. As Schemel Forum assistant, Morrison reports to Director Sondra Myers and handles tasks she felt “fit everything” she had done in her earlier work, such as organizing logistics and scheduling.

She often sees a lot of familiar faces in the audience, from people she grew up around to others she got to know through her congressional work. She continues to use those constituent services skills at the university, including arranging travel and hotels for speakers, working closely with the U of S facilities and operations offices, checking people in at events, making sure mics work and sharing information with the media.

“I’m not just sitting behind the desk,” Morrison said. “I’m up moving around, and I love that.”

Morrison loves interacting with forum members and guest speakers as well as “having a kind of a front-row seat to these amazing speakers and these really smart academics here at the University of Scranton.”

“We often say that the Schemel Forum ‘brings the world to Scranton,’ and that it is such a great asset to the region’s educational and cultural life,” she added. “The University of Scranton grounds us in a solid academic base and has such a beautiful and inviting campus.”

It’s a challenge to keep up with Myers, who has edited two books in the few years Morrison has worked with her in addition to directing the forum, Morrison said, but Myers “is so good to me and has welcomed me into this community.”

“She loves Scranton, and I love learning from her,” Morrison said.

Deciding to go back to work after having her daughters “was both scary and invigorating” because she didn’t want to miss anything with her girls, “but then I realized it was OK,” Morrison said. She and her husband — “truly a hands-on dad” — make a good team, and thanks to their decision to move back to Northeast Pennsylvania, they have their parents to rely on, including Morrison’s mother-in-law, Virginia Morrison, who helps a lot.

“I think right now this is a perfect fit for me because I can still spend a lot of time with my kids and hopefully still volunteer at their school,” said Morrison, a third-grade homeroom mom at Our Lady of Peace School in Clarks Green.

While attending Catholic school is a tradition in her family, Morrison also believes that type of education is a “really good fit for our family.”

”I think that Catholic education prepares our kids to be faithful leaders and life leaders who are dedicated to service and to the common good,” she said. “It’s just been really great for us. Now more than anything we need to instill those things in our youth.”

While she has considered going back to school for her master’s degree, Morrison keeps busy running her girls to various extra-curricular activities. She hopes to focus more on volunteering, though, as she liked getting to know the kids and families at her daughters’ school.

“Of course the end of the (school) year was a challenge, but we did enjoy our time together,” she added. “I was able to listen to my 5-year-old read a book for the first time. I don’t know if I would ever had that opportunity. Although the homeschooling part of it was hard, we made it work. And the teachers — teachers are amazing. They really are.”